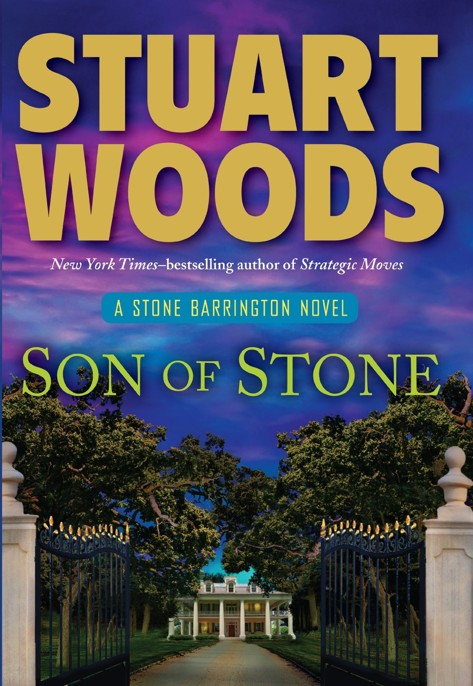 This book is for Sandy Gotham Meehan
1
E
laine’s, late.
Stone Barrington and Dino Bacchetti sat, sipping what each of them usually sipped, gazing desultorily at the menu. Elaine came and sat down.
“Having problems deciding?” she asked.
“Always,” Dino said.
“Are you being a smart-ass?” she asked.
“I’m torn between the pasta special and the osso buco,” Dino said.
“Yeah,” Stone said, “Dino is always torn.”
“Are you being a smart-ass?” Dino asked.
“I’m just backing you up, pal,” Stone said.
“Oh.”
“Have the pasta,” Elaine said. “It’s terrific.”
“How can I pass that up?” Dino asked, closing his menu.
“Dino,” Stone said, “you’re veering toward the ironic again. Watch yourself.”
Elaine looked at Dino. “You’re lucky there isn’t a steak knife on the table.” She flagged down a passing waiter. “Two pasta specials,” she said, her finger wagging between Stone and Dino.
“I’ll have the osso buco,” Stone said.
“I just sold the last one,” the waiter replied.
“Tell you what,” Stone said, “I’ll have the pasta special, with a chopped spinach salad to start.”
“Me, too, on the salad,” Dino said.
“And a bottle of the Mondavi Napa Cabernet,” Stone added.
“Good,” Elaine said, then she got up and wandered a couple of tables away and sat down there.
“That was close,” Stone said. “You could have gotten a fork in the chest.”
“I didn’t want the pasta,” Dino replied.
“Then why didn’t you order the osso buco to begin with?”
“They were out.”
“You didn’t know that.”
“Does it matter? They wouldn’t have had it anyway.”
They sat in silence for a moment, Stone sipping his Knob Creek, Dino sipping his Johnnie Walker Black.
“When does Ben get home for the holidays?” Stone asked. Benito was Dino’s teenaged son.
“Tomorrow,” Dino replied. “I get him first. Mary Ann will have him for Christmas dinner at her father’s.”
“Could you bring him to dinner tomorrow night?”
Dino looked at him oddly. “Since when did you especially want to have dinner with Benito?”
“Since Arrington decided to come to New York for Christmas and bring Peter.”
“You didn’t tell me.”
“I didn’t know until tonight. I was just leaving the house when she called. They’re due in early tomorrow afternoon.” Stone showed Dino the photo of the boy that Arrington had given him. “This was over a year ago,” he said. “I guess he’s bigger now.”
Dino gazed at the photograph. “Amazingly like your father,” he said.
“How would you know? You never met my father.”
“I’ve met the photograph of him in your study about a thousand times,” Dino replied.
“Oh, yeah.”
“Does he know?”
“Who?”
“Peter.”
“Don’t start that again,” Stone said.
“I didn’t start it, you did; some years back.”
Stone’s shoulders sagged. “All right, all right.”
“When exactly was it? I know you know.”
Stone cast his thoughts back. “Right before we were going to the islands for the holidays, to St. Marks. The night before, actually. I had bought her a ring.”
“You never told me that. You were really going to ask her?”
“Yes, I was. That morning it started snowing. I got to the airport and got a call from her saying that she was stuck in a meeting at the
New Yorker
. She had written a piece for them, and she was working with the editor. She said she’d get the same flight the next day. I was pissed off, but my bags were already on the airplane, and I didn’t want to go through
that
a day later, so I left. As it turned out, while she was at the
New Yorker
they assigned her to write a profile of Vance Calder.”
“Uh-oh.”
“Exactly. Turns out I got the last flight out of the airport before they closed it because of the snowstorm. She was stuck in the city for another day. Then Vance arrived in town and they had dinner. I met the flight the following day, and she wasn’t on it, and I couldn’t get her on the phone. Finally, a few days later, I got a fax at my hotel.”
“A Dear Stone letter?”
“Right. She was marrying Vance.”
“And when did she find out she was pregnant?”
“I’m not sure. I was out in L.A. four or five months later, and . . .”
“I was there, too, remember?”
“Yes, I remember. And when I saw her there she was obviously pregnant.”
“Did she say whose it was?”
“No, because she didn’t know.”
“The two . . . events were too close together, huh?”
“Right.”
“When did she know?”
“Not until after Vance’s death, I think.”
They were quiet again. “Had she seen the photograph of your father?”
“Sure, she was in the house a lot when we first met.”
“So she knew sooner than Vance’s death?”
“I don’t know; she may have been in denial.”
“Did Vance know?”
Stone shook his head. “She told me the subject never came up.”
“When did she finally admit it to you?”
“When we were in Maine a few years back, remember? Then, when you and I were staying at her house in Bel-Air last year, we had a frank talk about it. She said she had had a brush with ovarian cancer and had surgery, and that seemed to get her thinking about Peter’s future. She wanted me to spend some time with Peter, but it hasn’t happened until now. He’s been in boarding school in Virginia for more than a year.”

Aunt Dimity and the Family Tree by Nancy Atherton
A Forbidden Love by Alexandra Benedict
Lonesome Rider and Wilde Imaginings by Heather Graham
Talisman 2 - The Sapphire Talisman by Pandos, Brenda
Who Fears Death by Nnedi Okorafor
The Light Keeper's Legacy (A Chloe Ellefson Mystery) by Ernst, Kathleen
77 Rue Paradis by Gil Brewer
Feather Woman of the Jungle by Amos Tutuola
Not Until Moonrise by Hellinger, Heather
Paris Requiem by Lisa Appignanesi
Our partner