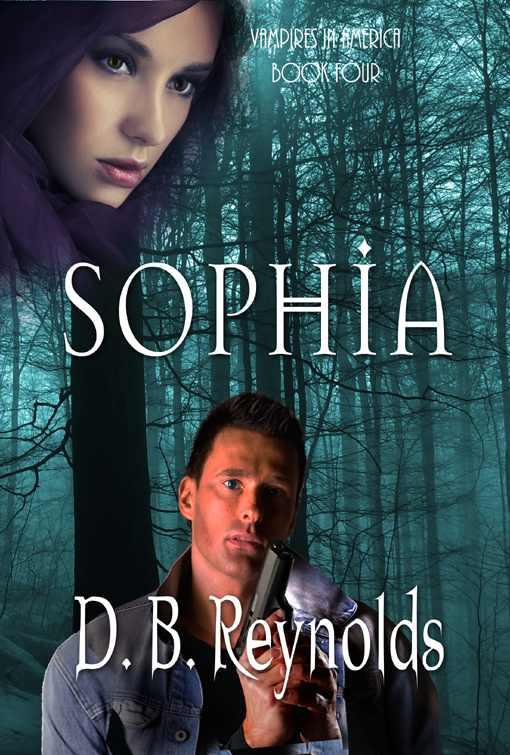 Dedicated with love to my brother Stan,

even though he covers his eyes for the sex parts!

Other Books by D. B. Reynolds

Raphael was drowning, trapped in a whirlpool of pain and loss . . . so much loss, sucking him down, icy shards swirling, slicing like razors into his soul. He raged at the bonds that held him trapped in this nightmare while his sweet Cyn wept, her tears warm against the skin of his chest, shredding what was left of his heart. The merciless sun forced him to lie dormant while he howled in silence, the voices of his dead children demanding vengeance against those who had destroyed them.

Five centuries old and the most powerful vampire on earth . . . and still he could only wait.

The hours ticked by, and then the minutes.

The sun was still a molten smear on the horizon when he shattered the chains of daylight that held him prisoner. He sat up, his arms circling Cyn, holding her close, pulling her onto his lap and murmuring meaningless words of reassurance. He reached out to his vampires, those still asleep and those just waking, but especially to
Duncan
who was near enough and strong enough to have felt the biting edge of Raphael’s nightmare. A nightmare that was all too real.

Cyn jerked her head up, studying him in the lamplight, her eyes red and swollen, her lovely face streaked with tears. He kissed them away, knowing his own face was wet with blood.

“What was that?” she demanded. “You were in pain, Raphael. You’re bleeding!”

“Tears,
lubimaya,
only tears. Two of mine have died, their lives stolen—”

Across the room his cell phone rang. Cyn jolted, twisting in his arms to stare at the intrusive device as if she’d never seen it before. “Who?” she asked fearfully.

“That will be
Duncan
,” he said soothingly. “I need to speak with him. Come.” He stood, still holding her tightly, sensing her fear for him, wanting to reassure her, but also needing the comfort for himself of having her pressed to his side, her heart beating strong and sure . . . and alive.

He crossed the room swiftly, one arm still holding onto Cyn as he picked up the cell on the third ring.

“
Duncan
. Marco and
Preston
are gone. Contact the
Seattle
compound and tell them we’re coming.”

Colin Murphy downshifted as he made the turn onto the narrow driveway. New gravel had been laid here a couple years back, but the rains had washed away much of it by now, leaving potholes big enough to swallow small animals. The truck dipped hard to one side and he gripped the wheel, his tires sliding on the uneven surface before the heavy 4X4 dug in and forged ahead. Say what you will about American-made cars, he thought to himself, but no one made a better truck. He gave the dashboard an affectionate pat as he leaned forward, squinting through the rain-spattered windshield.

Lillian Fremont had called to say she’d heard gunshots over here. Colin wasn’t really a police officer—more like an overqualified private security guy—but the good people of Cooper’s Rest paid him to deal with incidents just like this one, so he’d geared up and headed out. He didn’t really know what to expect, though. Mrs. Fremont had been adamant about what she’d heard, but the woman was more than ninety years old and her house was a good two miles away. Granted, sound was a weird thing, and situated as she was on the opposite side of a shallow dip in the forest floor, it was just possible she could hear quite well over there. Especially if what she’d told him was true.

Of course, in his experience most people didn’t know what real gunfire sounded like, expecting it to be like what they heard in movies and on television. But this wasn’t the big city, either. Most people up here had guns of their own and knew firsthand about gunfire.

And screams pretty much sounded the same everywhere.

Jeremy’s house came into view, a newer ranch style, single story with high ceilings and a fire-retardant shingled roof. The blinds were drawn behind the few windows, but then he’d expected that. Jeremy was a vampire, after all, so sunlight was hardly a priority. On the other hand, Jeremy’s significant other, Mariane, was human, and Colin had seen her in town often enough during daytime to know that she didn’t always sleep away the days with her lover.

Colin pulled up in front of the house, his eyes scanning the area as his fingers automatically switched off the ignition. He was getting a bad feeling about this. And if he’d learned one thing in twelve years as a Navy SEAL, it was to trust his feelings. Especially the bad ones.

He opened his door quietly and stepped outside, standing perfectly still for a moment to listen. There was no sound. None at all, except the patter of the ever-present rain.

He backed toward the rear of his vehicle, his gaze never leaving the silent house in front of him. He grabbed his Sig Sauer P228 from where it rode in a holster on his right hip and ejected the magazine, dropping his eyes just long enough to check it carefully before slapping it back in with the ease of long practice. Popping the hatch on his Tahoe, he leaned into the cargo area and brought out a Benelli M4 S90 shotgun, a combat shotgun designed to kill humans. Or vampires.

Colin pulled the cargo door down, leaning his weight against it so it closed with a muted click. And still not a sound from the house.

He didn’t like this. Didn’t like it at all. It had to be nearly sundown. It was difficult to tell sometimes with the heavy cloud cover, and he hadn’t exactly checked his Farmer’s Almanac this morning to find out the precise time of sunset. But it had to be close, and he sure as hell didn’t want to be snooping around Jeremy’s house when the vampire rose for the night, hungry and probably pissed if he found Colin lurking about uninvited.

But, he couldn’t walk away, either. Not with those screams Mrs. Fremont had reported.

Shaking his head, Colin racked the shotgun and rounded his truck, circling slightly to the left of the house. Finding nothing amiss, he crossed to the right and maneuvered through crowded trees around to the back. The rear of the house came into view and his stomach muscles clenched as adrenaline flooded his system.

The back door, what was left of it, stood wide open, looking like someone had taken an ax to it. There was no other explanation. It was made from heavy, solid core construction without even a decorative window—or it had been. Nothing but shards and splinters of wood were left, hanging crookedly from those heavy duty hinges. Jeremy was serious about his security; all the vamps were. Someone else had known that and come prepared. But whoever it was, Colin was pretty sure they were long gone. There wasn’t a sound coming from inside the house.

He approached carefully anyway, moving along the house’s back wall, well below the high, narrow windows. When he reached the wooden porch, he darted his head out for a fast, oblique look inside before stepping up. A triangular pane high above the door had been destroyed, scattering glass all around. It crunched beneath his boots and he paused, waiting for a reaction. But there was none. Shotgun at the ready, he stepped quickly into the house and out of the doorway. A scan of the kitchen showed even more destruction—cabinets trashed, probably with the same ax, dishes broken, refrigerator hanging open and blood spattered over the floor in front of it. Seeing that blood sucked the air out of his lungs until he realized it was Jeremy’s food supply, that among the litter were plastic donor bags, ripped and torn.

Did Jeremy need blood beyond what Mariane could provide? Apparently, he did. Or maybe it was for guests. Who the fuck knew?

Colin took a cautious step toward the archway on the other side of the kitchen, mindful of the slippery goo covering the floor. The next room was much bigger, with a high, angled ceiling and lots of furniture. A huge entertainment center took up one entire wall, now blasted to bits like everything else. Colin cleared the room carefully, aware of a sick feeling building in his gut. Where was Mariane?

He entered the back hallway. There were only three doors here, two of them open. One was a bathroom, obviously empty, but he cleared it anyway. The second was an office of some sort, the equipment trashed, files overturned in what was by now a familiar pattern of destruction. The trashed equipment in this room alone was worth thousands, which made him think this wasn’t a simple case of breaking and entering. Either that or they’d been after something other than easily pawned electronics.

Colin stepped back and eyed the final door. “
Dammit,”
he mouthed soundlessly and made his way down the hall.

The door was pulled closed, but not latched. Colin paused for a moment, listening and hearing nothing. He stood back against the wall and pushed the door open with the fingers of one hand. A quick look showed more of the same, an almost random trashing of the room and everything in it. He stepped through the doorway and immediately put a wall at his back.

Mariane lay in the middle of a big bed, blood soaking the sheets beneath her. Colin closed his eyes briefly, letting a wash of grief sweep over him before steeling himself for what had to be done. Every human instinct he possessed told him to rush to her side. Instead, he cleared the room, stepping into both the walk-in closet and attached bath before crossing to the bed and propping the shotgun within reach.

“Who did this to you, baby girl?” he murmured. She’d been beaten, tortured it appeared, her arms and legs covered with shallow knife cuts, designed to hurt like hell without killing the victim. None of the individual cuts would have been fatal, but the cumulative effect of so many . . . They’d left her lying naked, her legs spread wide. The blood and bruises on her thighs and vaginal area told him she’d been raped, and Colin gritted his teeth against a wave of anger so strong it nearly brought him to his knees.

The Guardians of the Halahala by Shatrujeet Nath
This Is Not a Test by Courtney Summers
The Deepest Cut by Dianne Emley
Toward the Brink (Book 3) by McDonough, Craig A.
Wanted: A Family by Janet Dean
The Age of Absurdity: Why Modern Life Makes it Hard to Be Happy (2010) by Michael Foley
The Montana Widow's Husband (The New Montana Brides) by Susan Leigh Carlton
Roosevelt by James MacGregor Burns
Trinity - Defying Destiny by Kylie Price
Fireflies by Ben Byrne
Our partner