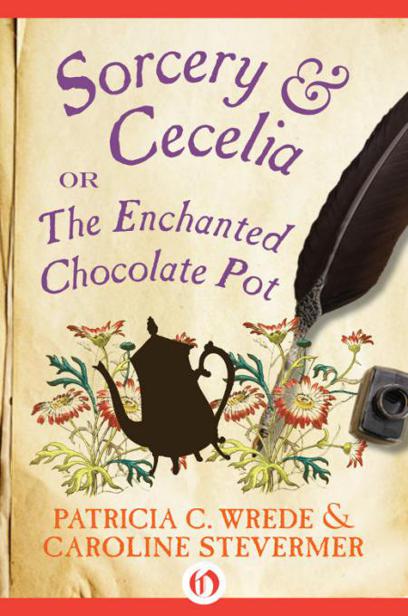 Sorcery and Cecelia
Or The Enchanted Chocolate Pot

The authors wish to dedicate this book to Jane Austen, Georgette Heyer, J. R. R. Tolkien, and Ellen Kushner, all of whom, in their several ways, inspired us to create it.

A Biography of Patricia C. Wrede

A Biography of Caroline Stevermer

It is dreadfully flat here since you have been gone, and it only makes it worse to imagine all the things I shall be missing. I wish Aunt Elizabeth were not so set against my having a Season this year. She is still annoyed about the incident with the goat, and says that to let the pair of us loose on London would ruin us both for good, and spoil Georgy’s chances into the bargain. I think this is quite unjust, but there is no persuading her. (I believe the fact that she would have been obliged to share a house with Aunt Charlotte, should she and I have come to London this year, may have contributed to her decision.) So I rely on you, dearest cousin, to write and tell me everything! If I am not to be allowed to enjoy a Season of my own, I can at least take a vicarious delight in your and Georgina’s triumph! I am quite convinced you will take London by storm.

Not that we are without amusement in Essex; quite the contrary! Aunt Elizabeth and I called at the vicarage yesterday and spent a stimulating afternoon listening to the Reverend Fitzwilliam discoursing on the Vanities of Society and the Emptiness of Worldly Pleasures. Aunt Elizabeth hung on every word, and we are to return and take tea on Thursday. I am determined to have the headache Thursday, if I have to hit myself with a rock to do it.

There is, however, a ray of hope. Lady Tarleton is to have a party for her niece next week. The invitation arrived this morning, and Papa says we are to go! And Aunt Elizabeth approves! She thinks it is to be an informal hop, as Lady Tarleton’s niece is not yet out, but Patience Everslee told me in the greatest confidence that there is to be waltzing! I only hope Oliver will stay long enough to accompany us. He has been moping around the house like a sick sheep ever since you and Georgy left, and yesterday he asked Papa, very casually, whether Papa did not think it would be a good idea for him to go to Town this year for a week or two. He thinks he is being very sly, but if he puts off making his arrangements for another day or so Papa will have accepted Lady Tarleton’s invitation and Oliver will be obliged to stay here until after the party. I have not, of course, pointed this out to him. Oliver has stated many times his dislike of hearing advice from his younger sister, so it is his own fault if he has not got sense enough to see which way the wind is blowing.

Aunt Elizabeth intends for the two of us to pay a call on Lady Tarleton and her niece on Monday, by way of improving our acquaintance before the ball (which is to say, she wants to have a look at the niece). I shall be on my best behavior, even if the niece turns out to be quite odious. There is no point in
looking
for difficulties the day before a party.

And there may be more excitement to come. Sir Hilary Bedrick has just been named to the Royal College of Wizards; the whole village is buzzing with the news. I suspect he was chosen because of that enormous library of musty old spellbooks at Bedrick Hall. He left yesterday for London, where he will be installed, but all of us expect great things when he returns. Except, of course, for Aunt Elizabeth, who looks at me sideways and says darkly that magic is for heathens and cannibals, not for decent folk. Perhaps that is why she holds Sir Hilary in such dislike. I would wager my best kid gloves that if it were not for Papa’s interest in the historical portions of Sir Hilary’s library, Aunt Elizabeth would have cut the connection ages ago.

Do, please, try to find me those silks I asked you about before you left, and if you should happen to see a pair of long gloves that would match my green crape, please, please send them at once! I should so like to look well at Lady Tarleton’s party.

Give my love to Georgy and Aunt Charlotte, and do try not to let Aunt Charlotte bully you too much. And do, do write and tell me everything you are doing!

If you’ve been forced to listen to Reverend Fitzwilliam on the subject of the emptiness of worldly pleasures for hours together, I feel I ought to write something bracing to cheer you up. But after three days of a London Season I find it hard to come to the defense of frivolity with any spirit. Perhaps it will make Rushton seem more amusing to you if I complain
vigorously.
(Don’t worry, I haven’t said a word to anyone else, not even Georgina.)

First, there was our arrival in Berkeley Square, a very welcome event after a day spent in the coach with Aunt Charlotte complaining of her migraine and Georgina exclaiming, “Only look, a sedan chair!” at every opportunity. It was very late and we were very tired and soiled with our travels, too weary to feel the proper emotions on entering such a grand house for the first time. (Horace Walpole is by no means Aunt Charlotte’s favorite author, but the opportunity to hire the genuine Mayfair town house he genuinely died in for the Season has given her a new appreciation of him and his works.)

Make no mistake, it is very grand. On the outside it is a high, narrow, polite-looking house built of brick. On the inside there is a high-ceilinged entrance hall with a marble staircase winding up two flights. On either side of the hall are reception rooms. The one on the right is called the blue saloon. It is very comfortable with a bow window overlooking the Square. On the left side of the hall is the drawing room, much grander than the blue saloon, furnished with lyre-back chairs, delicate sofas, and a spinet. There are velvet curtains in the windows and a highly polished marble floor, upon which I slipped and sat down hard as we were being shown about the house. This was my first piece of clumsiness in London, but I suspect it will not be my last. The general effect of the marble floor and ivory curtains is almost arctic. Only touches of primrose and black relieve the whiteness. At the top of the two flights of stairs are the bedrooms. Georgina’s looks out over the Square and mine faces back into the lane behind the house. If I crane my neck I can see down into the kitchen garden—but there is nothing much to look at. Nothing to compare with the gardens at Rushton.

It seemed like a dream to me, following Georgina up and up the stairs—she like a kind of angel climbing to her proper place, her golden hair bright in the light from the lamps—me like a ramshackle shadow lurking after her, shedding hairpins and stumbling over the hem of my skirts.

The bedrooms are lovely, but that night they seemed grand and cold and I was a little dismayed to find myself in my own room all alone—can you credit it, after I schemed for years to get a room to myself? So I slipped in to Georgina to say good night and get my top buttons undone. Georgina was sitting at her window, trying to guess from the darkened glass what direction she was facing so she could say her prayers toward home. I turned her around and didn’t tease her, even when I saw the lock of hair she had clenched in her moist little palm—Oliver’s, tied up in a bit of pink ribbon. Can you believe it?

Well, as I say, I got her pointed in the right direction and she got me unbuttoned and told me that I had a smut rubbed clear across my forehead and a spot coming on my chin. (As if I hadn’t been driven half-mad feeling it coming out
all day long
in the coach…) So we parted, she to her prayers and I to my bed, the highest, hardest, narrowest, dampest bed on four lion’s paws (London would be grander still if they knew how to air their sheets).

Our first day in London was spent shopping, which means I kicked my heels while Aunt Charlotte and the modiste went into raptures over Georgina. The second day, we were taken to see the Elgin Marbles, which was interesting, and to listen to other people see the Elgin Marbles, which would make the eyes roll right back in your head with boredom. The third day, we went back to shopping and I was able to get gloves. Please find enclosed a pair that I think will suit your pomona green crape to perfection. I bought a pair for myself and have spilt coffee on them already. So you see London hasn’t changed me yet.

I feel quite envious about Lady Tarleton’s dance. Aunt Charlotte has spoken of Almack’s but never yet without looking at me and giving a little shudder of apprehension. She intends to call on Lady Jersey tomorrow. If their acquaintance has been exaggerated (and you know that sometimes people do not care quite as much for Aunt Charlotte as she thinks they do), I don’t know how we will obtain vouchers. It is plain, however, that without vouchers for Almack’s Assembly, Georgy will never truly shine in Society, no matter how lovely she is. For my own sake, I hope I get to go, too. It would be a shame to have trodden Robert Penwood’s feet black and blue learning to dance and then never to get a chance to put it to the test.

The Museum of Intangible Things by Wendy Wunder
Irresistible by Bankes, Liz
Random Acts of Love (Random #5) by Julia Kent
Mystery: Missing Rita: (Mystery, Suspense, Thriller, Suspense Thriller Mystery) by James Kipling
Death in the Desert by J. R. Roberts
The Man Who Turned Into Himself by David Ambrose
Lemonade Mouth by Mark Peter Hughes
Dragonlance 09 - Dragons of the Hourglass Mage by Weis, Margaret
Icing on the Cake by RaeLynn Blue
Tempted by Her Boss by Karen Erickson
Our partner