Read Souls of Aredyrah 3 - The Taking of the Dawn Online

Souls of Aredyrah 3 - The Taking of the Dawn 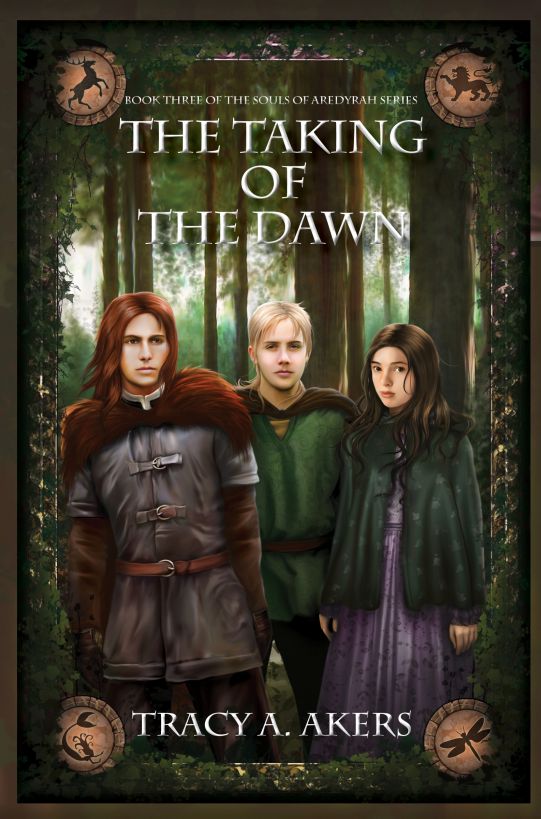 Book Three of The Souls of Aredyrah
Series

The Taking of the
Dawn

by
Tracy A. Akers

The Taking of the Dawn

All rights reserved under United States,
International and

No part of this book may be reproduced or
transmitted in any form or by any means, graphic, electronic or
mechanical, including photocopying, recording, taping, or by any
information storage or retrieval system -except for brief quotes
used in reviews- without the written permission of the author.

This book is a work of fiction. Names,
characters, places and incidents are products of the author’s
imagination or are used fictitiously. Any resemblance to actual
events or locales or persons, living or dead, is entirely
coincidental. 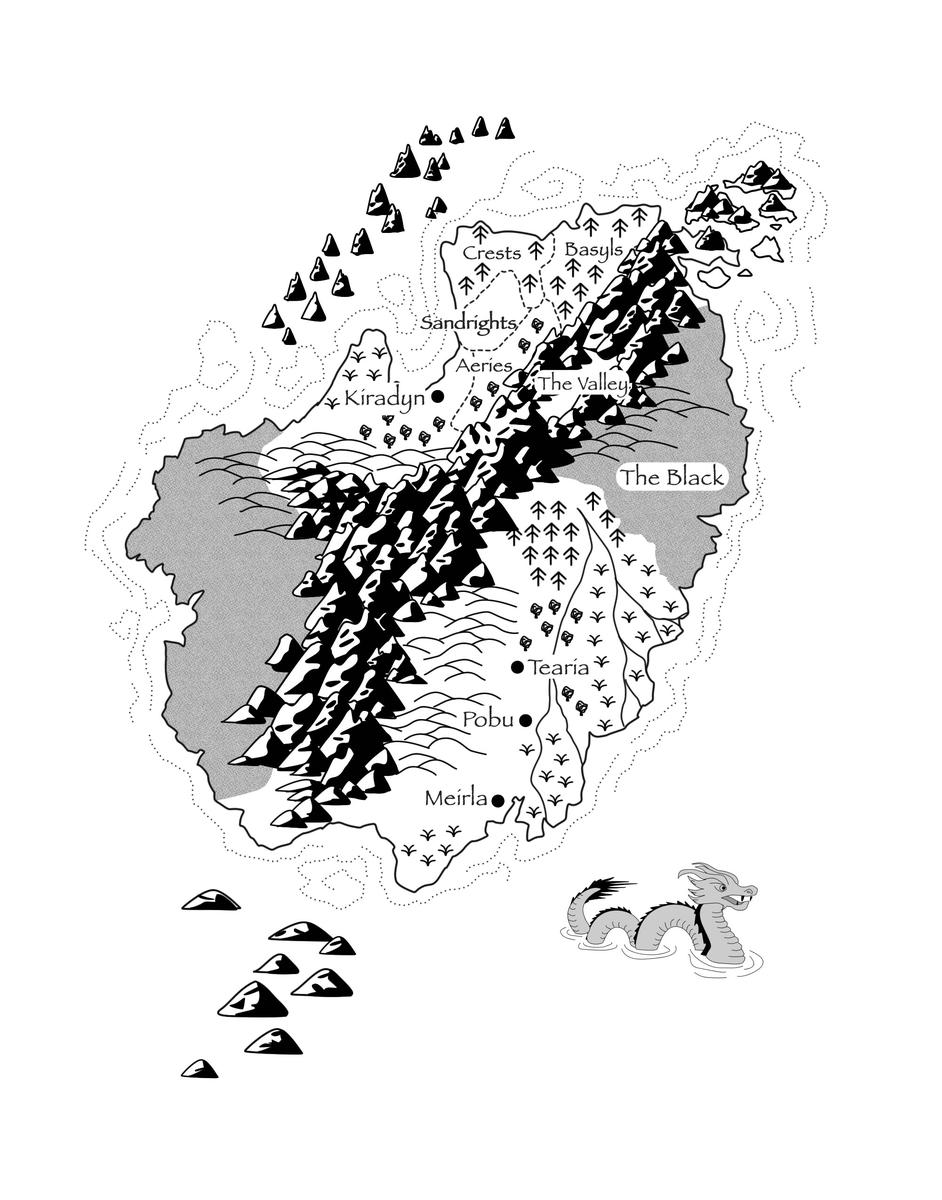 Part One: Into the
Fire

Chapter 2. Jewel of the Valley

Chapter 6. Sins of the Father

Chapter 7. Affairs of the Heart

Chapter 12. Concerns of the World

Chapter 20. The Writing on the Walls

Chapter 23. The Plenum of Four

Chapter 25. Against the Wall

Part Four: The Edge of the
Abyss

Chapter 28. Into the Black

Chapter 33. Into the Pit

Chapter 35. Across the Divide

Chapter 37. Dangers in the Night

Chapter 38. Demon on the Mountain

Part One:
Facing the Fire

D
ayn stood atop a
rocky outcrop, silhouetted against an iridescent palette of molten
fire. As far as he could see, a mesmerizing splendor stretched, a
great river of lava from which sparkling channels crept down the
mountainside in brightly braided patterns. Trees in the paths of
melted rock ignited like thousands of flaming candles. Some
evaporated into white-hot oblivion; others were turned to ebonized
shapes, gruesomely posed.

Dayn reached for his sister’s hand, squeezing
it so tight the tips of her fingers turned white. But she didn’t
complain. She probably didn’t even notice.

“Have you ever seen such a thing,” Alicine
whispered.

“I’m not sure I’m seeing it now,” Dayn
replied.

Alicine frowned. “Now what are we going to
do?”

“You don’t mean
all
the way back.”

“Well, he obviously didn’t know about this…or
maybe I misunderstood him. Don’t worry, we’ll get home. I probably
just didn’t take us far enough north or something.”

The wind shifted in their direction, wrapping
them in a veil of vapor that reeked of sulfur and smoke. Dayn
covered his nose with his free hand and pulled his sister along
with the other.

“Come on,” he said. “The horses are getting
nervous, and we can’t afford to lose them.”

Dayn scrambled down the slope, but a stab to
his heel suddenly sent him hopping. He cursed the ground, the
rocks, and everything else he could think of at the moment. His
feet were already aching, and this was yet another in a long series
of attacks upon them. It was time to put his boots back on, and he
dreaded it.

Where he and his sister were from, no one
ever went without their boots. And for most of the past fifteen and
a half of Dayn’s sixteen-year-old life, he hadn’t either. The
terrain in Kirador was mountainous and the temperatures almost
always cool, if not downright frigid. To go with bare feet was
something no sensible Kiradyn would do. But Dayn had not worn his
boots for months now, preferring to go barefoot. That was what the
Jecta of Tearia did. And that was what he considered himself
now—Jecta.

He pulled up his foot to inspect it, finding
an indention with a tiny white pebble lodged within. He picked it
out, then limped to the horse, grumbling as he yanked a bundle from
its back.

“Don’t tell me,” Alicine said with amusement,
“you’re actually putting your boots on.”

“Well, I have to some time, don’t I? I’m
tired of having to dance around every time I get off the horse.
It’s a lot rockier here than back home—I mean, back in Tearia.”

“A lot rockier
and
a lot colder. I’m
surprised your feet aren’t blue.” Alicine scolded him with her
eyes, once again acting as if she were the older, then pulled her
shawl tighter around her shoulders. It was the last defense she had
against the decreasing temperatures, other than the ratty blanket
she had been using as a bedroll.

Dayn glanced at his sister, noting the
cold-swept features of her face and the stiffness of her body. The
dress she wore should have been warmer; it was long sleeved and
high collared, its full skirt reaching to her ankles in yards of
gold-colored material. But the fabric had been selected for its
beauty, not its practicality. It was a dress embroidered with
hundreds of tiny white flowers, a dress for a Summer Maiden, not a
girl trudging through the mountains. No, its weave wasn’t enough to
stave off this kind of cold. Even the molten fire on the other side
of the ridge did little to warm the environment.

“In my pack. But one thing at a time. Boots
first…coat later,” Dayn said.

Alicine sighed. “Suit yourself, but that
tunic of yours is not going to keep you warm for long.”

Dayn shrugged his shoulders against the
rough, green wool of his tunic. At one time he had worn it in
comfort, but it felt itchy to him now. For too many months in
Tearia he had gone bare-chested, with nothing against his skin but
a kilt around his hips. Now he had on long sleeves and thick
trousers, the scratchy material pressed against every part of his
body.

He pulled the boots from his pack and plopped
to the ground, frowning with annoyance at his feet. They were
stained with dirt and rough with calluses from months of going
barefoot. But the boots, he knew, would bring blisters to his toes
no matter how tough his feet had become. He scowled and yanked on
his socks, then the brown leather boots, shiny new when he had left
Kirador, now scuffed and worn with travel. He snaked the long laces
up his calves without regard to pattern and tied them in a knot,
then stood up and groaned. The things were miserable.

Alicine laughed. “You loved those boots when
you first got them. Couldn’t wait to wear them as I recall. Worked
extra chores at home and helped Jorge at the smithy to earn the
coin to buy them. And now…”

Dayn cocked his brow. “And who is it that
keeps tugging at her collar? Hmmm?”

Alicine arched her neck and ran a finger
beneath the lace of the collar that stopped just below her jaw
line. Ever since she had donned the dress for the return trip home,
she had tugged and fidgeted at the material almost as much as Dayn
had his.

“I don’t know how I ever thought this dress
was comfortable,” she said. “But I guess we’d better get used to
dressing like Kiradyns again. I doubt the climate or our neighbors'
icy attitudes will allow us to go around showing our arms and
legs.”

Dayn turned away and checked the strapping of
the packs on the back of his horse. “There’s a lot of things we
won’t be allowed,” he muttered.

“I said, won’t Father and Mother be pleased
that we’re bringing two horses back with us?” He stepped over to
his sister and lifted her onto one of the horses. “Come on. There
isn’t much daylight left, and I want us to get as far away from
here as possible before we set up camp for the night. I’d hate to
wake up and find us in the path of that,” he said, motioning to the
glow of roiling fire on the other side of the ridge.

Dayn mounted his horse, a broad-backed
chestnut with a patch of black on its face. It was a beautiful
animal, nothing like the old hag of a horse their father owned. But
then again, their father probably didn’t own a horse anymore.
Alicine had ridden out of Kirador with the only one he had when
she’d gone looking for Dayn the day he ran away. They’d left the
animal grazing near the cave that had taken them to the other side
of the world, and it was doubtful the old gray had found its way
home. The poor beast was probably still wandering the mountains
somewhere, or else dead by now. Regardless, Father would be pleased
to see his children riding home after all these months. Perhaps the
new horses would settle his temper, once the happy emotions of the
reunion faded and the reality of what Dayn and Alicine had put him
through set in. But it wasn’t likely.

Dayn took the lead and urged his horse down
the embankment to an open space near the trees below. There wasn’t
exactly a path to follow, no humans had been there for centuries,
but he and his sister had learned to navigate the rugged terrain by
working their way through only the barest patches of landscape. The
going had been slow, and they’d oftentimes found themselves having
to retrace their steps. As a result, it was taking much longer than
expected to make their way to the other side of the mountain range.
The shortcut through the cave that had taken them to Tearia was no
longer an option. It was destroyed by the violence of an angry
mountain, taking evidence of Kiradyn and Tearian history with
it.

The Sky Fisherman by Craig Lesley
Game Winner (The Penalty Kill Trilogy #3) by Lindsay Paige, Mary Smith
SelkiesSeduction by Anne Kane
The Baron's Betrayal by Callie Hutton
Ode To A Banker by Lindsey Davis
A Demon And His Witch by Eve Langlais
KL: A History of the Nazi Concentration Camps by Nikolaus Wachsmann
Hellfire by Masters, Robyn
Ghost's Dilemma by Morwen Navarre
Dead Six by Larry Correia, Mike Kupari
Our partner