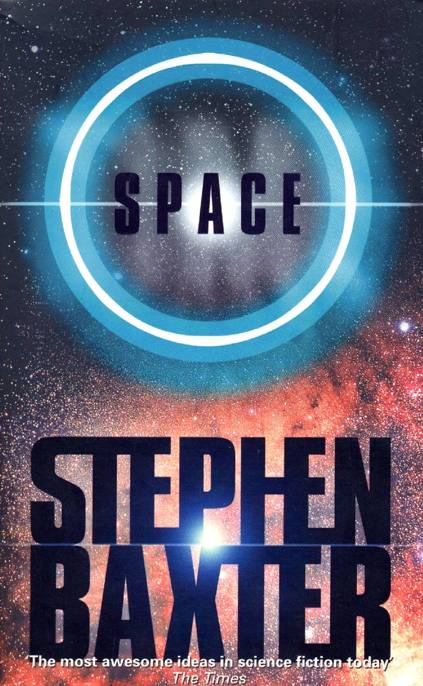 Annotation
'If they existed, they would be here' ENRICO FERMI. In the second volume in Stephen Baxter's epic Manifold Series Reid Malenfant inhabits the universe Malenfant kick-started in TIME ('science fiction at its best' FHM) -- and 'they' are here. When Nemoto, a Japanese researcher on the Moon, discovers evidence of extraterrestrial intelligence in the solar system, the Fermi Paradox provokes both Malenfant and Nemoto to question why now? Because, suddenly, there are signs of intelligent life in deep space in all directions. Deeper layers of Fermi's paradox unravel as robot-like aliens, the Gaijin, seem to be e-mailing themselves from star to star, and wherever telescopes point, far away, other alien races are destroying worlds!
Manifold: Space
by Stephen Baxter
To my nephew, Thomas Baxter. And Simon Bradshaw and Eric Brown

If they existed, they would be here.

He could see the sail.
It was a gauzy sheet draped across the crowded stars of this place.
Where, Malenfant? Why, the core of the Galaxy, he thought, wonder breaking through his agony.
And within the sail, cupped, he could see the neutron star, an angry ball of red laced with eerie synchrotron blue, like a huge toy.
A star with a sail attached to it. Beautiful. Scary.
Triumph surged. I won, he thought. I resolved the
koan,
the great conundrum of the cosmos; Nemoto would be pleased. And now, together, we're fixing an unsatisfactory universe. Hell of a thing.
But if you see all this, Malenfant, then what are
you?
He looked down at himself.
Tried to.
A sense of body, briefly. Spread-eagled against the sail's gauzy netting. Clinging by fingers and toes, monkey digits, here at the center of the Galaxy. A metaphor, of course, an illusion to comfort his poor human mind.
Welcome to reality.
The pain! Oh, God, the
pain.
Terror flooded over him. And anger.
And, through it, he remembered the Moon, where it began...
Chapter 1
Gaijin
A passenger in the
Hope-3
tug, Reid Malenfant descended toward the Moon.
The Farside base, called Edo, was a cluster of concrete components -- habitation modules, power plants, stores, manufacturing facilities -- half buried in the cratered plain. Comms masts sprouted like angular flowers. The tug pad was just a splash of scorched moondust concrete, a couple of kilometers farther out. Around the station itself, the regolith was scarred by tractor traffic.
Robots were everywhere, rolling, digging, lifting; Edo was growing like a colony of bacilli in nutrient.
A
hi-no-maru,
a Japanese Sun flag, was fixed to a pole at the center of Edo.

"You are welcome to my home," Nemoto said.
She met him in the pad's air lock: a large, roomy chamber blown into the regolith. Her face was broad, pale, her eyes black; her hair was elaborately shaved, showing the shape of her skull. She smiled, apparently habitually. She could have been no more than half Malenfant's age, perhaps thirty.
Nemoto helped Malenfant don the suit he'd been fitted with during the flight from Earth. The suit was a brilliant orange. It clung to him comfortably, the joints easy and loose, although the sewn-in plates of tungsten armor were heavy.
"It's a hell of a development from the old EMUs I wore when I was flying shuttle," he said, trying to make conversation.
Nemoto listened politely, after the manner of young people, to his fragments of reminiscence from a vanished age. She told him the suit had been manufactured on the Moon, and was made largely of spider silk. "I will take you to the factory. A chamber in the lunar soil, full of immense spinnerets. A nightmare vision!..."
Malenfant felt disoriented, restless.
He was here to deliver a lecture, on colonizing the Galaxy, to senior executives of Nishizaki Heavy Industries. But here he was being led off the tug by Nemoto, the junior researcher who'd invited him out to the Moon, just a kid. He hoped he wasn't making some kind of fool of himself.
Reid Malenfant used to be an astronaut. He'd flown the last shuttle mission -- STS-194, on
Discovery
-- when, ten years ago, the space transportation system had reached the end of its design life, and the International Space Station had finally been abandoned, incomplete. No American had flown into space since -- save as the guest of the Japanese, or the Europeans, or the Chinese.
In this year 2020, Malenfant was sixty years old and feeling a lot older -- increasingly stranded, a refugee in this strange new century, his dignity woefully fragile.
Well, he thought, whatever the dubious politics, whatever the threat to his dignity, he was
here.
It had been the dream of his long life to walk on another world. Even if it was as the guest of the Japanese.