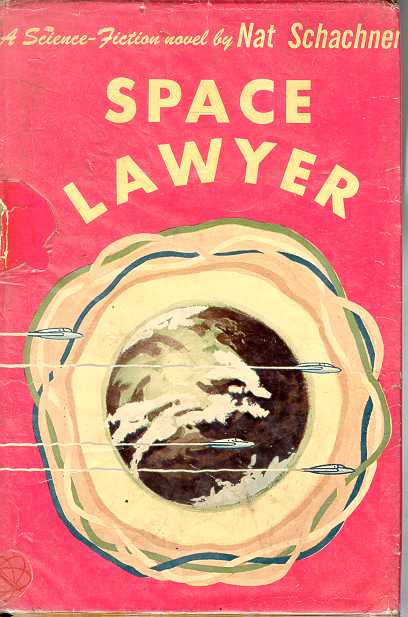 BY THE DIM LAMPS

THE PRICE OF LIBERTY

ONLY SHORT PASSAGES FROM THIS BOOK FOR EDITORIAL USAGE MAY BE
REPRODUCED WITHOUT PRIOR PERMISSION.

MANUFACTURED IN THE U.S.A.

SIMEON KENTON was an irascible man. He knew it; the far-flung thousands employed by the Kenton Space Enterprises, Unlimited, knew it. But only his daughter, Sally, knew he worked hard at being an irascible man. And that increased his irascibility. to such a pitch that he could only glare and sputter unintelligible words.

"You'd be the first to agree that a man in your position owes it to his daughter to see to it that her account isn't perpetually overdrawn."

Old Fireball was his nickname because of his habit of staging explosions on the slightest provocation. He exploded now.

"You get a larger allowance than any girl of your acquaintance," he yelled. "Yet you have the nerve to stand there and ask for more. You must think I'm made of money."

She asked it so innocently and with such a candid air that he felt utterly deflated. "Well, humph, that is—I may have a little money, but—" His indignation rose again. He snatched the statement of her account from his desk, waved it at her. "Damn it, Sally, I've had enough of this nonsense. Not another cent do you get—"

Father and daughter were standing in the private office of the president, owner and sole manager of the Kenton Space Enterprises. From this small, simply furnished room Simeon Kenton ruled an empire vaster by far than any of the mighty empires of old Earth. Rome, Assyria, England; Teutoslavia, Nippo-China, Australo-America had flung their tight webs over large portions of the Earth's surface—but Simeon Kenton's space-ships fastened their flags in the spongy marshes of Venus, on the desolate wastes of Mars, on rocky asteroids and on mighty Jupiter itself.

Technically it was only a commercial empire, with ultimate sovereignty in the Interplanetary Commission whose seal of approval was necessary on all leaseholds, claims of ownership, mining rights, cargoes, exploitations, wages and hours and conditions of employment. Actually Simeon Kenton was the kingpin of the spaceways, with half a dozen smaller princelets competing with him for concessions, spheres of influence and business.

In the old days, when Simeon was a young man coming up the hard way, there had been no Interplanetary Commission and everything went—much to Old Fireball's irascible satisfaction. Not that he was a tyrant, by any manner of means. He was a driver and a hard taskmaster to his men, admitting of no failure or excuse; but he was fair and quick to reward the worthy. If every man in his employ trembled in his space boots at the sight of him, deep down there was the comforting feeling that Old Fireball knew what he was about, that he would never let them down.

Simeon loved the exercise of power, a vast, benevolent paternalism with himself as the paterfamilias. As space became less of a thing unknown, and law and order took the place of the old scramble for new worlds, however, codes were established, spheres were delimited, and space law came into being. All this was much to Old Fireball's disgust. He grumbled constantly of the good old days when men were men and not members of the Interplanetary Union of Spacemen, Blasters, Rocket Engineers, Wreckers and Cargo Handlers, Local No. 176.

"Har-r-rumph!" he'd snort, "if a man's got a grievance, why can't he come direct to me instead of running like a dodgasted infant to whine to his union and the commission? Sure there're chiselers among the other companies. There's that double-dyed leohippus, Jericho Foote, of Mammoth Exploitations. Feeds his men stinking, crawling food, pays 'em when he can't help himself, wriggles out o' his contracts like a Venusian swamp snake. I wouldn't trust that smooth-faced, smooth-talking Simon Legree farther'n I could throw an asteroid." He rubbed his own straggly white whiskers complacently. "Regulations and laws 're all right for guys like him, but not for me."

Accordingly he instituted a legal department in Kenton Space Enterprises, Unlimited; and many and Homeric were the legal tilts and battles between himself and the commission. He snorted and yowled and tore his hair when a decision went against him and rained maledictions on the unfortunate head of his chief legal adviser, Roger Horn, and on the august members of the commission alike; but if the truth were to be told, he loved it. Space had become too tame and business had become too grooved; and these tilts were the safety valves for his love of a keen-witted fight.

He scared everyone but his daughter. She smiled understandingly at his tantrums and humored him as though he were a crotchety old invalid and went blithely on her way regardless. And they got along famously, even though, as now, he stormed and ranted and fumed.

"Yes siree," he yelled, "not another cent do you get until the next—"

The slide panel opened noiselessly and a young man came into the room. He was a very determined-looking young man with a square jaw and intent blue eyes. Sally Kenton pivoted on a daintily-shod foot to look at the intruder.

The determined young man didn't see her at first. His blue eyes were fixed and his square-jawed face pointed like a hunting dog's directly at the incongruous, mildly whiskered saint's image of her father. There was something very definite on the young man's mind.

Simeon's pale-washed eyes flashed dangerously behind his glasses. All the irascibility his daughter had frustrated focused on this most impertinent, rash intruder.

"Dale—Kerry Dale. I'm in the legal department, under Mr. Horn. And I think—"

Simeon Kenton seemed to grow on the sight. His chest puffed and his cheeks puffed in unison. He raised on his toes until his five-foot-four assumed the dimensions of a giant. "So you
think,
Mr. Kerry Dale, or whatever your name might be? You think you have the right to barge in on me when I'm in private conference without so much as a by-your-leave and inflict your utterly useless thoughts on
me.
When you've been five years in my employ, not just twelve months, fifty-two weeks, three hundred and sixty-five days, you'll know better than to waste my time with dodgasted nonsense. Get back to your desk, Mr. Kerry Dale, and stay there. That's what I suppose that fool, Roger Horn, is paying out my hard-earned money for—"

He stopped for breath; inflating his lungs for another blast.

But the young man gave him no chance to continue. He was a tall young man and with a certain set to his shoulders, as Sally noted with approval. She enjoyed her father's outbursts and knew how strong men wilted and blanched before them, and clinked—or was it slunk—away before their withering blasts like whipped dogs. Would this Kerry Dale do the same?

He did not. A certain steely glint hardened his intent blue eyes. "I've always wondered why they called you Old Fireball," he said slowly. "Now I know. The term is apt. I've seen them in space. They're little and all puffed up and they explode at the merest contact with a breath of air and scatter themselves harmlessly. Calm down, sir; or you'll get a stroke."

Sally heard old Simeon's quick, choking gasp. Her own senses tingled. She was going to enjoy this.

"Me—
Old Fireball!
Why, you young snipperwhipper—I mean whappersnipper—damn it, you know what I mean—get out of here before I—"

The young man took a step forward. His hands gripped the fuming old man by the shoulders. "Not before you hear what I've got to say," he snapped. "I'm ashamed of you," he said severely. "I thought there was a
man
running the Kenton Space Enterprises. People said there was. That was why I was anxious to get in. That was why I took a job in that scrape-and-bow legal department of yours as soon as I got out of law school, under that smug old fossil, Roger Horn. That was why I worked my head off, twenty-five hours a day, twisting good, honest law and picking legalisms in the space codes so your piratical deals could sneak through regardless."

His indignation mounted in equal waves with the color in his face, and with each surge he shook the mighty Simeon Kenton just a little harder. "I suppose you think it was your fine Roger Horn, that puffed-out bag of wind, who won you the suit against Mammoth last month? I suppose you think it was that same self-winding Horn who thought up that neat little scheme whereby you obtained legal possession of Vesta against the actual staking-out claim of the government of Mars? Sure he took the credit for it. He always does. Loyalty to the department! Loyalty to Kenton Space Enterprises! Bah!"

Kerry plunged on, not even knowing that Simeon was trying to say something.

Simeon opened his mouth again; and it was rattled shut for him. "I'll tell you," Kerry yelled down at him. "He hemmed and hawed and grunted like an old sow and twiddled his thumbs and said it was a fixed rule in the empire of his majesty, Old Fireball, never to grant promotions under three years of slavery. He said—"

Old Simeon found tongue at last. It had swelled with indignation until it protruded from his mouth. "That goddasted blitherskite—I mean that dadgosted slitherblite—did he dare call me
Old Fireball?"

For the first time Kerry Dale grinned. He released the fuming old man. "He didn't quite call you that," he admitted. "That's my own inventive genius; or rather, the inventive genius of every slaving underling in your employ. But I thought, like a fool, I'd come direct to you. They said you were a hard man and given to tantrums; but fair. I see now they were mistaken."

Old Simeon shook his released shoulders back into position. He twitched his rumpled vest back into shape with a violent gesture. He saw red—and yellow and purple and a lot of colors not in the normal spectrum.

"You can't fire me," Kerry Dale said bitterly. "I've already resigned. I resigned as soon as I took a good look at you."

He turned sharply on his heel and stalked out through the open slide panel. The mechanism closed softly behind him. Old Simeon shook his fist. His wispy hair and wispier beard were rumpled, and there was a glare in his eyes.

"Of all the impertinent young—"

Sally was interested; yet offended. Interested in the way this most remarkable young man had maltreated her revered parent —something that no one had dared do as long as she could remember—and offended because in all that stormy interview not once had his eyes strayed toward her; not once had he shown by look or gesture that she was even present. She wasn't accustomed to that sort of treatment any more than Simeon Kenton was accustomed to the kind
he
had received.

Even if she hadn't been Sally Kenton, men's glances would inevitably have gravitated in her direction. She was mighty easy to look at. From the top of gold-brown head to most satisfyingly shapely ankles she attracted attention, and the neat little dimple in her chin and the quick quirk of her lips did their share in fixing that attention. Yet this Kerry Dale had positively not seen her.