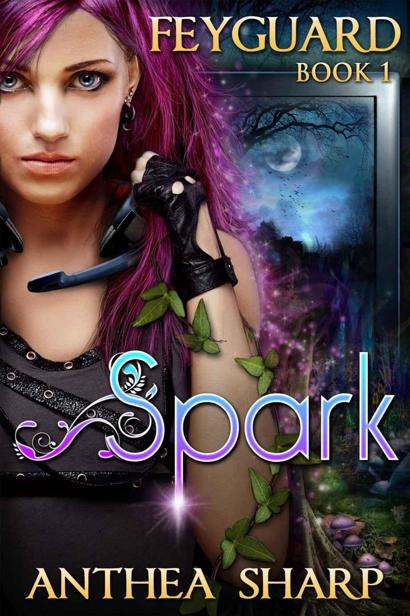 This is a work of fiction. Names, characters, places, and incidents are the product of the author’s imagination. Any resemblance to real events or persons is purely coincidental.

Copyright 2013 Anthea Sharp. All rights reserved. This e-book is licensed for your personal enjoyment only. It may not be re-sold or given away. Support independent authors - read legally. To obtain permission to excerpt portions of the text, other than for review purposes, contact
[email protected]
. Print copies available at most vendors. Visit the author at
www.antheasharp.com
and sign up for notification of new releases at
http://www.tinyletter.com/AntheaSharp

QUALITY CONTROL: This work has been professionally edited by
Editing720
. If you encounter any typos or formatting problems, please contact
[email protected]
so they may be corrected.

What if a high-tech game was a gateway to the treacherous Realm of Faerie?

Superstar gamer Spark Jaxley's life might look easy, but she's part of an elite few who guard a shocking secret; the Realm of Faerie exists, and its dark magic is desperate for a foothold in the mortal world.

Aran Cole hacks code and sells his gaming cheats on the black market. It's barely a living, and one he's not proud of. But when he turns his skills to unlocking the secrets behind Feyland—the most exciting and immersive game on the market—he discovers power and magic beyond his wildest dreams.

Spark's mission is clear; pull Aran from the clutches of the fey folk and restore the balance between the worlds. But can she risk her life for someone who refuses to be rescued?

T
he Dark Queen of the Realm of Faerie paced over the moon-dappled mosses before her tangled throne. Her skirts flared out into gossamer shadows, and diamonds sparkled in her black hair like tiny, cold stars, capturing the light of the sickle moon high overhead. Every step she took snapped with frustration, and the creatures of her court flinched as the reverberations of their queen’s anger echoed through the realm.

Even the powerful horned hunter and his red-eyed hounds stayed at the far edges of the clearing, the star-tarnished oaks at their backs. The court musicians stood in a huddled trio, fingers quiet upon their instruments. Only the fearful whispers of the denizens of the Dark Court sawed the edge off the silence.

The queen halted, the still before the storm, and the last whispers died. From the darkened pathway a figure made of shadows came; a knight bearing an enormous blade. He strode past the violet bonfire, the flames licking eerie reflections on his black armor; past the feral and nameless creatures of the court, past the hollow-eyed banshee, and the sharp-toothed goblins with their caps of blood.

“My lady.” He went down on one knee and bowed his black-helmed head in supplication.

“What have you found?” Her voice was shaded with wrath.

“It is as you guessed. The opening between the mortal world and our own remains but a thin crack. Nothing has changed since that gateway was closed through deceitful mortal and fey means.”

“Curse the Elder Fey!” She clenched her fists, and frost striated the velvet-deep mosses beneath her feet. “We are no more than beggars for the scraps of dreams, where once we were feared across every human land. There must be a way to enter the human world freely, and harvest the essence of our power.”

“If there is, we will not discover that means in the realm, my lady.”

The queen’s eyes narrowed. “Then we must find someone who can. Surely there is one among the mortals who would bend to the needs of the realm.”

She whirled, and the fey folk cowered from the sharpness of her smile.

“Scouts, keep watch on the faerie ring. Soon enough, a human will stumble into the Dark Realm—and when they do, we will be ready. This time, there will be no escape.”

S
park Jaxley waited outside her temporary mansion, the fog of her breath matching the cold clouds overhead. A gleaming limousine grav-car hovered by the curb with her luggage packed inside, and her security guards were deployed strategically around the manicured lawn—far enough away to give her the illusion of space, but ready to spring into action if needed.

Not that she had anything to be worried about in the controlled compound of The View. No clamoring autograph-seekers or paparazzi trying to get a candid shot of the most famous sim gamer in the world. No lines of cars driving slowly past, no screaming fans gathered in front of the wrought-iron gates.

There was only a single bird flitting through the landscaped shrubbery and the distant noise of the city below. Spark was glad of the solitude. This goodbye was going to be hard enough as it was.

The early spring air held a bite, the chill slipping past her scarf to touch her neck with icy fingers. Spark re-wound her scarf—magenta, to match her hair—then slid her hands into the fur-lined pockets of her jacket while she waited for her friends to arrive.

Friends—the last thing she’d expected to find when she came to Crestview. Stuck in an insignificant city for a month wasn’t her idea of a prime trip. But VirtuMax paid her plenty to be their spokesmodel, and part of the contract included beta-testing their immersive new FullD equipment and its launch game, Feyland. Which meant coming to their exclusive compound in the center of exactly nowhere.

She never thought her life would change so completely as a result.

She sighed softly, and Burt, the head of her security team, glanced her way. “Would you prefer to wait inside, Miss Jaxley?”

She’d rather feel the weak sun on her face, breathe the fresh air. After all, she was about to be cooped up in various forms of transportation for the next seven hours. SimCon, her next destination, was half a continent away.

A girl with long blond hair walked up the driveway, her arm around a tall, lean guy, their steps in perfect synch. Jennet Carter and Tam Linn. Spark tried to ignore the little spurt of envy heating her blood. Not that she wished they weren’t together; they were perfect for each other. It was just—she wanted that, too. But with her crazy life, she didn’t have the option to hook up with a guy in any meaningful way.

Besides, all the ones she met were blinded by her fame, or wanted to use it. Or weren’t quite right for her. Like the one driving up in his fancy red grav-car.

Roy Lassiter. True, they’d shared some intense experiences, but no matter how hard she tried to fall for him, she couldn’t manage it.

“Hey,” Roy said, getting out his car and giving her his super-charming smile. For once, it looked real.

Spark smiled back, wishing she knew what to say. She could tell Roy was hoping for something: a secret love note, her private number, a promise she couldn’t give. Jennet and Tam’s arrival saved her, and she turned to them, glad for the distraction of Jennet’s hug.

“I can’t believe you have to leave,” Jennet said. “Can’t you stay a bit longer?”

“VirtuMax needs me at SimCon to debut the FullD,” Spark said.

“Off to be a superstar, is it? Shake the lowly dust of Crestview off your shoes?” Roy squeezed her shoulders and was smart enough to let her go.

Tam nodded. “We’ll stay in touch. After all…”

He glanced at the nearby security guard. Burt seemed out of earshot, but Tam was a careful guy. None of them wanted to broadcast the fact that they’d been deputized by magical beings to guard the mortal world. People would think they were insane. Or even worse, believe them. Faerie magic was power, and not many people could be trusted with it.

The whole thing seemed like a crazy sort of dream, except that seven of them had experienced the same thing. Eight if you counted Tam’s friend Marny, who had dealt with the reality of the fey folk in her own way.

She wanted to say goodbye to the big guy. Even though he was old enough to be her dad, he was a gamer first. Like the rest of them, he’d fought in the final battle alongside the Elder Fey to keep the Realm of Faerie from rampaging through the human world.

Zeg’s old gas-guzzler was as out of place in The View as a fly on vanilla ice cream, and he was proud of the fact. He took immense pleasure in using his official gate pass, and Spark suspected he deliberately messed with his car’s engine before he drove up to the compound, making the car smoke and rattle even more than usual.

Sure enough, the coughing clatter coming up the street was unmistakable. Roy made a face, though he didn’t say anything as Zeg’s car rounded the corner and chugged up the drive. The guzzler halted with a squeal of brakes, and Zeg hopped out, his smile beaming from behind his frizzy beard. He had a passenger, too—his niece, Marny.