Read Speak of the Devil Online 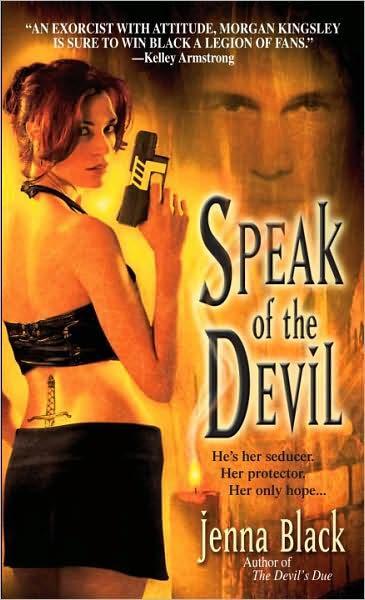 Praise for
THE DEVIL INSIDE

“An exorcist with an attitude, Morgan Kingsley is sure to win Black a legion of fans.”

“A sassy heroine who’s not afraid to do what it takes to get the job done or to save a loved one’s life. Add to that a sexy hero, great secondary characters, and a story line that keeps you reading, and this one is definitely a keeper.”

“[Black’s] got a winning heroine, a well-crafted contemporary world where demonic possession is just a part of life, and a nice balance of mystery, action and sex, making this light but engaging novel an urban fantasy series kickoff full of promise.”

“Talk about your odd couples! The delicious irony of trapping a sexy demon and a cranky exorcist in the same body gives rising star Black lots of room for conflict and action. It’s inventive in the extreme!
4
½ stars. Top pick!”

“The plot is nonstop from the first page and the romance is sprinkled throughout….A wonderful new addition to the genre,
The Devil Inside
is an intriguing story and Morgan Kingsley an engaging heroine. I can’t wait to see what the next book,
The Devil You Know
, has to offer.”

“With characters you can’t help but love, and those you love to hate, Ms. Black begins her new series with a story line that’s full of action and surprises. It’s sometimes dark, often loving and completely sexy.”

“5 Ribbons.
The Devil Inside
is nail-biting, powerful and passionate all in one… a fast-paced, nonstop adventure that I’m sure everyone will love as much as I do.”

“An outstanding beginning to a new supernatural series! The book starts out with action and only gets faster. I never noticed the story to slow down at all. The plot slowly unfolds to reveal that more is going on than anyone can possibly guess. I sincerely believe the author to have a major winner on her hands with Morgan Kingsley. Five stars.”

Praise for
THE DEVIL YOU KNOW

“A gritty and gutsy tale…. Wonderfully written with complex characters, an intricate plot, and intense demon encounters, this book will keep readers enthralled. For an intense thrill ride, pick up a copy of
The Devil You Know.”

“A suspenseful, sexy paranormal that you will love!”

“The Devil You Know
is an exciting and thrilling ride that will have readers eagerly waiting for the next chapter in Morgan’s life.”

“Every bit as exciting as the first. … Amidst the intense action, the romance, and the fight to survive,
The Devil You Know
will endear many of its engaging characters and have readers looking forward to the next demonic adventure.”

Praise for
THE DEVIL’S DUE

“Twisted plots, evil demons, sex, control, and love are woven into this well-written and intricate fantasy.”

“Black and urban fantasy are a match made in heaven—so to speak!
4
½ stars.”

“If you enjoy action, mystery, and sex, this urban fantasy is replete with them all.”

“The Devil’s Due
is the BEST book in the Morgan Kingsley series so far, and it gets better and better with each book. The writing was flawless, and I was blown away by this latest installment.”

A
LSO BY
J
ENNA
B
LACK

The Devil You Know

Watchers in the Night

Secrets in the Shadows

Shadows on the Soul

Hungers of the Heart 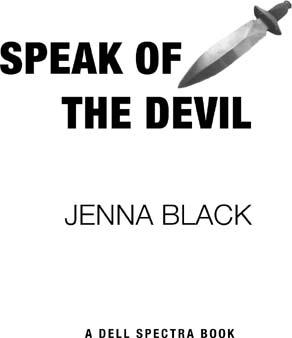 To Dan, for… everything.

My thanks
to Wendy Rome, who helped me figure out how to make up laws—and lawsuits—to govern exorcists. Morgan hates you for getting her into so much trouble, but I’m very grateful! Thanks also to my wonderful agent, Miriam Kriss. And a special thanks to all the fabulous people at Bantam Dell who’ve made working on the Morgan Kingsley series such a joy: publicist Alison Masciovecchio; editorial assistant (and sender of all things good) David Pomerico; and most especially Anne Groell, editor extraordinaire!

“
I don’t
need a lawyer,” I told Brian once again.

He looked more mulish each time I said it. “Yes, you do!” His voice had risen a tad, but he was still calmer than I was. I suspected I was red in the face by now.

Arguing with Brian is almost always a losing battle, but that never stops me from trying. “This case is bullshit. People have tried to sue exorcists before and gotten laughed out of court.”

That was a bit of an exaggeration, but still… The general public doesn’t know why most hosts are catatonic after their demons have been exorcized, or why a small percentage are actually brain-dead. And there was absolutely zero evidence that the exorcist’s performance had anything to do with it. But that hadn’t deterred Jordan Maguire Sr. from filing suit against me when my exorcism on his son didn’t go quite the way he’d have liked.

“I don’t think you understand lawyers,” Brian said with a sardonic grin. “The fact that no one’s been successful in a suit so far is more of a plus than a minus for some of them. If they happen to succeed
where everyone else has failed, they make a big splash. If the suit fizzles, there’s no harm done—but it’ll still be a major pain in the ass for you.”

“It’s not just going to go away, Morgan.”

I think I was beginning to believe that, but that didn’t stop me from hoping. I had more than enough problems in my life without dealing with a lawsuit. I felt a whopper of a headache coming on. “Why can’t you just defend me yourself?” I’m afraid I sounded a little whiny, but I couldn’t help it. What’s the good of dating a lawyer if he can’t defend you when some asshole decides to sue?

“Because you need a tort defense attorney, not a corporate attorney.”

I plopped down on Brian’s couch and rested my head against the back, staring at the ceiling. If Maguire’s goal was to make me miserable, he’d succeeded. But there was a reason I was violently opposed to hiring a lawyer, and it wasn’t anything I’d said out loud—yet. See, a couple of months ago, my house and all my worldly possessions had burned to the ground. It was going to take me approximately forever and a day to recover from the financial devastation, even when the insurance company finally coughed up every cent they owed me. There was no question it was arson, and the official investigation had ruled that I was not the guilty party. However, since the fire had been started
inside
my house while I was still in it, the insurance company had launched its own investigation. My theory was that they were looking for excuses to delay paying me, but it turned out that mentioning this to the insurance investigator wasn’t the way to win friends and influence people.

Add to that the fact that the U.S. Exorcism Board had suspended me when the lawsuit was filed, and I
was already on a strict diet of ramen noodles and peanut butter sandwiches. I didn’t want to think about how much I’d have to pay a lawyer to defend this suit.

“Look,” I said, “I know this isn’t your area of expertise, but I’d feel a hell of a lot more comfortable with you defending me than some stranger.”

Brian sighed as he took a seat on the couch beside me. “You wouldn’t find it so comfortable if I bungled the case.”

“You wouldn’t!” I protested, raising my head to give him an indignant look. Brian is competence personified, and I’m not just saying that because I’m in love with him.

He frowned at me. “Yeah, I would. Not because I’m an idiot, but because I’m not an expert. Believe me, this thing could get ugly fast, and I’d be out of my league.”

“What percentage of hosts end up catatonic after an exorcism?”

It was my turn to frown. “I don’t know, about eighty percent. Why?”