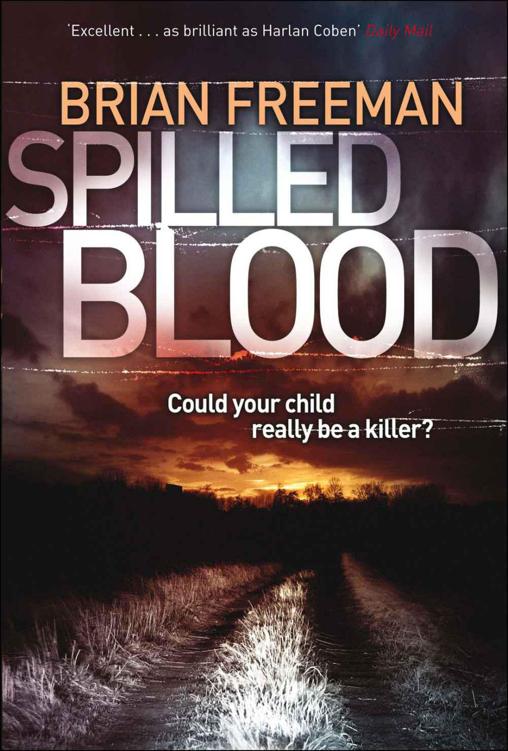 The moral right of Brian Freeman to be identified as the author of this work has been asserted in accordance with the Copyright, Designs and Patents Act, 1988.

This book is a work of fiction. Names, characters, businesses, organizations, places and events are either the product of the author’s imagination or are used fictitiously. Any resemblanceto actual persons, living or dead, events or locales is entirely coincidental.

Brian Freeman
is an international bestselling author of psychological suspense novels. His books have sold in 46 countries and 20 languages and have appeared as Main Selections in the Literary Guild and the Book of the Month club. His fifth novel
The Burying Place
was a finalist for Best Novel of the Year in the International Thriller Writer Awards. He lives in Minnesota with his wife and three cats.

TO THE ATTENTION OF
MR. FLORIAN STEELE
CHIEF EXECUTIVE OFFICER OF MONDAMIN RESEARCH

I KNOW YOUR SINS

YOU SACRIFICE THE INNOCENT

YOU SEVER FAMILIES WITH YOUR EVIL

DESTRUCTION WILL RAIN DOWN
ON ALL THAT YOU HAVE CREATED

NO ONE WILL BE SPARED

I AM A TORRENT WITHOUT MERCY

I AM THE VENGEANCE OF GOD

Hobbled by a flat tire, Ashlynn’s fire-orange Mustang convertible limped to a stop on the main street of the abandoned farm town.

It was nearly midnight, but moonlight gave the ruins of the town a silver glow. Dirty shards of glass from whitewashed storefront windows littered the gravel. Dead weeds traveled like snakes along broken sidewalks. Beside her, the façade of a deserted building boasted the name of the Southwest Farmers Mercantile Bank chiseled into its red brick, but the bankers had long since gone bust, along with the farmers and shop owners. Across the street, a rusted 7Up sign dangled from the worn metal banner for Ekqvist Foods. When the wind blew, the lone screw made a tortured, twisting squeal, like a captured animal.

Officially, the town didn’t exist anymore. It wasn’t on maps. Only the local teenagers came here now to break the windows and paint graffiti on the walls. A hundred years earlier, the street had awakened each morning with the throb of machines and the perfume of corn and gasoline. Not anymore. The town had dwindled year by year, family by family, and finally disappeared. Even the ghosts had moved on now – there was no one left to haunt.

Ashlynn was marooned. She checked the signal strength on her phone, but she was in one of those great swaths of rural land where the mobile towers didn’t reach. You could drive for miles among the corn and soybean fields of southwest Minnesota, cut off from the world, going back in time. She sat in the expensive car that her father had given her last year, when she turned sixteen, and wondered what to do next. Where to go. How to get there.

She got out of her car and stood like the last girl on earth in the center of the old main street. She studied her stricken Mustang, which was covered with a film of dust. The flabby rubber on the left rear tire looked like melted ice cream. On either side of her, the remains of a half-dozen decaying buildings loomed behind boarded-up doors and No Trespassing signs. The buildings were interspersed with weedy, overgrown lots, like missing teeth in a rotting smile.

Ashlynn didn’t expect an answer. The road saw little traffic during the day, and at night no one came here. It was a tiny, forgotten corner of the vast plains of the Spirit River Valley. When she shouted, a raven squawked back. The towering trees rattled their bare branches with a gust of wind. No one else replied.

With nowhere to go, she wandered to the end of the street, where the town dissolved into a landscape of dormant fields. She saw the gray superstructure of a corn elevator, which was grimy with disuse. A children’s park nestled in the open space near the farm machinery, underneath soaring oak trees. The ground was muddy and winter brown. She spotted an old swing, made of thick rope with a warped wooden seat, hanging from one of the low branches of the largest tree. She kicked through the soggy grass and sat down. With the heels of her leather calf boots in a puddle, she pushed herself gently back and forth and hung on to the scratchy twine.

It made her feel younger and innocent again. It made her want to stay here for ever. She closed her eyes, listening to the roar of the
wind and inhaling the scent of pine. She lost track of where she was. She thought about her father when she was just a girl, and found herself humming a lullaby that made her smile. He’d sung it to her in the old days. She tried to pretend for a while that things were different, but pretending didn’t erase what she’d done or change what she had to do. Sometimes life gave you unbearable choices.

When Ashlynn opened her eyes again, she was still in the ghost town, but she was no longer alone.

Two silhouettes had seemingly risen out of the dead ground. They stood, watching her, on the dirt road near the park. Ashlynn clutched the rope swing, keenly aware of how vulnerable she was. Her instincts told her to flee, but she couldn’t run. The three of them stared at each other, thirty feet apart, frozen and cautious. No one moved; no one spoke. Then the taller of the two strangers ventured closer, and the second followed behind. Ashlynn recognized them. They were girls from her high school.

The taller girl swaggered toward Ashlynn until she was practically in her face. She carried a beer bottle in her hand, and when she spoke, a hoppy aroma wafted from her mouth. ‘Ashlynn Steele. I don’t believe it.’

Olivia Hawk was a year younger than Ashlynn. The girl was five-feet-ten, bony and pretty. Her legs were long matchsticks squeezed inside ratty jeans, and she wore an untucked flannel shirt over a white T-shirt that let an inch of her flat stomach peek through. She had long chestnut hair and intense brown eyes. She was smart and fiery, and Ashlynn could see naked emotion in the girl’s face.

‘What are
you
doing here?’ Olivia demanded. Her voice cracked, more with misery than anger. She was drunk.

Other girls resented Ashlynn because of who she was: the daughter of Florian Steele; rich in a town where everyone else scraped by; blond, small, beautiful. That was enough, but with Olivia, there
was more. Even if there had been no feud between the towns, no ugly secrets, the two of them would never have been friends.

‘I got a flat tire,’ Ashlynn said.

‘So where were you tonight?’

She heard the unspoken accusation from Olivia:
You were in St. Croix, weren’t you?
It wasn’t true, but she had no intention of sharing what had really happened. That was her own secret.

‘What about you two?’ Ashlynn asked. ‘Why are you here?’

‘We’re here for Kimberly, okay? The three of us used to hang out here.’

Ashlynn closed her eyes and felt Olivia’s grief and anger wash over her. She understood. She’d intruded on something sacred.

‘She was my best friend.’

‘She was bald, and she weighed seventy-nine pounds when she died.’

Ashlynn winced at the image. She hadn’t known Kimberly well, but she remembered the girl’s death. Kimberly. Vince. Lynn. Gail. Drew. She remembered each of the St. Croix teenagers who had died of leukemia in the last five years. Every ghost cast a guilty shadow on her.

‘It was a terrible thing, Olivia,’ Ashlynn said. ‘Awful.’

Olivia jabbed a finger in her face. ‘Don’t pretend you understand. You have no idea what it’s like to lose someone close to you.’

Ashlynn couldn’t stop herself. She laughed, which was the worst thing she could do. It was a strangled, tragic laugh that made her face twitch and made Olivia red with anger. She tried to compose
herself and defuse the situation before it got out of control. ‘I’m sorry. Please, Olivia, let’s not do this now.’

‘Fuck you,’ Olivia told her in a slurred voice. ‘I hate you.’

Ashlynn simply wanted the confrontation to be over. She wanted to be alone to cry. She turned her attention to the other teenager, who stood off to the side of the swing, staring at the ground. If anyone would help her, it was Tanya Swenson.

Tanya was a moon-faced, curly-haired redhead. She was shy and withdrawn, a girl who trailed in the wake of a smart, outgoing friend like Olivia. She was a Barron girl, but she’d wound up in the St. Croix clique because of her friendship with Olivia and Kimberly – and because of her father. Tanya’s father was the attorney who had led the charge to take down Mondamin Research in court.

Tanya squeezed her hands in her pockets. ‘I’m okay.’

Ashlynn wanted to see the girl’s eyes. She wanted Tanya to acknowledge the silent bond between them.
You know I’m not the enemy.

‘Do you have your car here, Tanya?’ she asked.

The heavy, short girl shuffled on her feet. ‘Um, yeah.’

‘She’s not taking you anywhere,’ Olivia interrupted them. ‘No way.’

Ashlynn sighed in frustration. She had no strength to fight. ‘Fine. Whatever. I’ll sleep in my car, Olivia. Will that make you happy?’

‘I know why you’re here, but this has nothing to do with me. I’ve been driving for hours. I’m tired. I’m leaving.’

Ashlynn got off the swing, but Olivia shoved her back hard. She
spilled off her feet, grabbing the rope for balance. The swing jerked in a crazy circle, and her knee slipped into the mud. Cramps knifed through her abdomen, so sharp that they took her breath away. She tried to get up, but she couldn’t, so she bent over with both hands in the dirt.