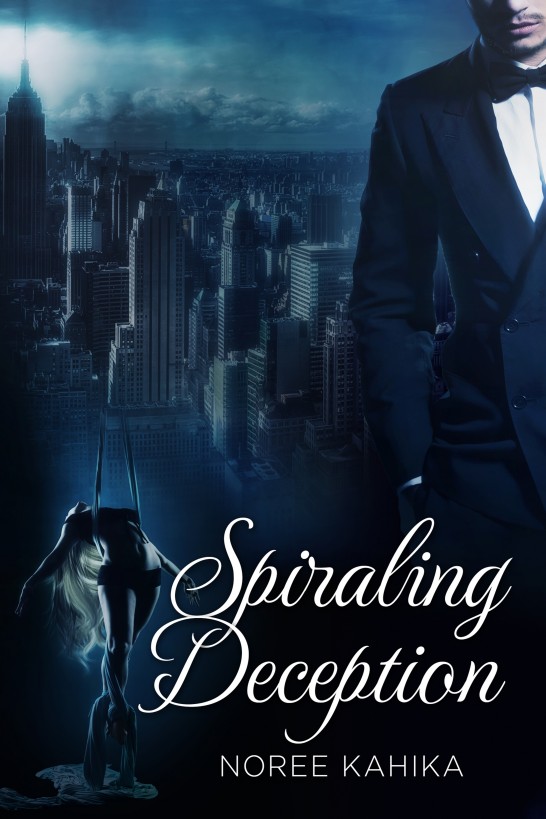 Spiraling Deception is book one in the
Phoenix Alumni series

This book is a work of fiction. Any
references to real people, historical events, or real locales are
used fictitiously. Other names, characters, places and incidents
are products of the author’s imagination, and any resemblance to
actual events, locales, persons living or deceased is entirely
coincidental.

All rights reserved including the right of
reproduction in whole or in part and in any form.

Edited by Faith Williams at the Atwater
Group

Roman felt his phone vibrate—for what seemed
like the millionth time today—in the coat pocket of his custom-made
black suit just as his driver, Seth, held the door open for him. As
he reached into the inside breast pocket to retrieve the phone,
Roman unfolded himself from the sleek black Mercedes, and nodded a
brisk acknowledgment to Seth.

Roman scanned the message, frowned and then
glanced up, momentarily struck by the majestic view of the
four-story, twenty-two bedroom, sixteenth-century limestone chateau
that sat perched on the grassy knoll before him.

Chateau Mon Desire made both a
breathtakingly scenic and imposing portrait in all its
extraordinary grandeur—it was just a damn shame he was only here
for the next twenty-four hours on business.

“
Bonjour Monsieur Knight,”
greeted the sprightly Frenchmen, Henri. The man smiled anxiously at
Roman while he nervously adjusted the length of his neon purple
tie.

“
Henri,” acknowledged
Roman, barely stifling a yawn just as his phone buzzed in the palm
of his hand yet again.

The nine-hour flight from New York to
Bordeaux had been draining, adding an additional toll to his
already grueling and extremely demanding schedule. Sleep was what
Roman was in desperate need of and the measly hour of rest he had
procured in the small bedroom of his private plane on the flight
over to France was not nearly enough.

“
I am pleased to announce,
Monsieur Knight, that all the preparations for this evening’s event
are finalized.” Henri’s features beamed with obvious
pride.

“
Good.” Roman nodded
distractedly as he typed a short reply to the latest of many urgent
emails that required his immediate attention.

Clearing his throat, Henri continued with an
optimistic note in his tone. “Would you like a tour of the chateau,
to assess for yourself how the arrangements are going, Monsieur
Knight?”

“
No, thank you, Henri. I’m
confident you have everything under control. In fact, I’ll be
heading directly up to my suite. I have some pressing business to
attend to that cannot wait. Please inform the staff that I don’t
wish to be disturbed until later this afternoon.”

“
As you wish,” Henri
murmured. “But before you take your leave, Monsieur Knight, may I
offer you something to drink or eat? Some coffee, perhaps a little
wine and some cheese?”

Roman momentarily tore his gaze away from
the damn phone and regarded the man before him. Henri LeSage was
the operations manager of Chateau Mon Desire. The chateau itself
was located in Sauternes, a thirty-minute drive from Bordeaux in
South West France. Although well into his sixties, Henri was a
spritely, agile man who had a penchant for garishly bright,
colorful ties. His hair was dark brown with a liberal sprinkling of
gray throughout and he wore a classic French goatee. Born and
raised in the Bordeaux region of France, Henri had lived here all
his life. Winemaking was in his blood, with over six generations of
LeSage family members producing some of the finest sweet wines in
the country, if not the world.

Roman had always been diverse with his
business investments and buying Chateau Mon Desire four years ago
was undoubtedly a diverse addition to his extensive portfolio.
Until recently, it had also proved to be a mildly lucrative
adventure. However, this year, the chateau had produced its best
yield to date and with several high-profile wine merchants coming
to the chateau this weekend, Roman had taken time out of his busy
schedule to fly over and attend the celebrations before he headed
to Paris for several business meetings. Early April was the time
when prominent chateaus in Bordeaux showcased their new vintages
for the coming year and Chateau Mon Desire was no exception.

“
Thank you but no, Henri.”
Roman used a gentler tone, knowing that not only was he
disappointing the eager employee, but he simply could not delay
attending to business any further.

“
As you wish,” Henri
conceded with a slight bow of his head.

Roman noted the flash of disappointment
flare visibly through Henri’s eyes and regretted being the cause,
but he neither wished nor had the inclination to tour the chateau
while hearing of the past year’s endeavors, regardless of the
exuberance Henri exhibited. A long, hot shower and a few hours
uninterrupted to return the numerous phone calls and pressing
emails was what Roman needed. That and a couple of days of sleep,
but there was no possibility of that happening with the slew of
meetings he had to attend to over the next few days in Paris.

Roman paid his Knight Industries executives
exceptionally well to manage his subsidiary investments. It was
their responsibility to compile the numerous reports and present
the bottom line to him personally; he did not need to be snowed
under with the day-to-day operations of trivial ventures. Hell, he
hadn’t even planned to attend the chateau’s celebrations at all but
his PA, Maggie, had talked him into adding it to the schedule at
the last minute. Her reasoning being Roman was flying to France
this weekend anyway. Now, seeing the passionate Frenchman in
person, Roman suspected Henri had worn Maggie down, which was a
small feat in itself. Maggie was one tough cookie to crack at the
best of times but especially when it came to organizing Roman’s
schedule. The woman could be a virtual dictator when it came to his
business engagements.

With a video conference call scheduled
before the celebrations began this evening, and three more meetings
in Paris over the next two days, his agenda was almost full.
Tuesday, he planned to be aboard his jet and fly home to New York
despite Alexander Roth’s—a computer genius who’d made billions off
his software designs and who also happened to be one of Roman’s
closest friends—plea to spend a few days on his luxurious yacht,
which coincidently happened to be currently docked in Venice. The
idea was…immensely tempting and God knew he could use a few days of
nothing but rest and relaxation. And Venice, of course, was the
ideal location for that…but Roman was less than two weeks away from
closing in on a major deal that if successful, would be worth
literally millions to Knight Industries. Current negotiations with
the deal were tenuous at best, so it was in Roman’s interest that
he head back to the office as soon as possible. With an inward
sigh, Roman thought it was days like this that he felt a great deal
older than his thirty-two years.

“
Well, if there is
anything you need, please don’t hesitate in letting me or the staff
know, Monsieur Knight.” Henri began to walk away only to stop and
turn around abruptly. “
Oh mon
dieu
, I almost forgot!” Henri cried
animatedly. “I fervently hope this evening’s entertainment is to
your liking, Monsieur Knight. I am most pleased to have secured a
very skilled and entertaining
acrobat
troupe known as the Amazing Lawson Performers and as it so happens,
they, too, are American. I had the great pleasure of seeing them
perform personally in Sonoma last year when I was there for the
winemaker’s conference. Their act was extremely impressive, and so
I thought they would make a delightful addition to this weekend’s
festivities.”

“
They’re from America? I
thought you would have brought in some local talent, Henri.”
Roman’s brows raised in mild surprise at Henri’s choice of
entertainment.

“
Oui. We also have some
local talent as well, but I am hoping our international guests this
evening will find them as uniquely talented and charming as I did
last year.”

“
I look forward to this
evening’s performance then, Henri.” Roman dismissed the Frenchman,
and he headed toward the ornate staircase that led to the fourth
floor of Chateau Mon Desire where his private master suite was
situated, permanently reserved for Roman even though he had only
visited the chateau twice in the past four years.

Roman knocked back the last drop of the
crisp white wine from his glass as the man who sat next to him
continued to ramble on and on about some trivial business venture
he had recently embarked on. Roman knew instinctively the boorish
man was hedging for new investors in his latest enterprise and even
though Roman had made it abundantly clear he was not interested,
the fool continued to babble on, much to Roman’s mounting
irritation. With a glance at his watch, he wondered how much longer
he’d have to endure this fucking aggravation before he could take
his leave. The table he was seated at was one of twenty, all filled
with inebriated wine merchants in the grand ballroom of his own
goddamn chateau. The evening had become predictively mind-numbing
and beyond insufferable.

To add to Roman’s displeasure, he did not
get any rest that afternoon; he’d spent half the time on the phone
and the other half on his fucking laptop. As Roman sat there, he
swore to himself that after he got through the next crucial months
with Knight Industries, he would come back to Chateau Mon Desire
for a much-needed vacation sans annoyingly opportunistic
businessmen and obnoxiously drunken wine merchants and finally have
the opportunity to enjoy the estate in all its magnificence.

The sound of Henri clearing his throat
through the microphone drew his attention to the animated little
French man. Speaking firstly in his native language and then
followed by English, Henri LeSage introduced the evening’s featured
entertainment.

“
Ladies and gentleman,
without further ado, I am pleased to introduce to you our honored
guests, the very talented acrobatic troupe, all the way from the
United States of America—the Amazing Lawson Performers.”

The applause dwindled as the lights faded
with only a lone spotlight centered on the square stage in the
middle of the grand ballroom. A thick silk white ribbon hung
between two trapeze apparatuses from the fifteen-foot ceiling and a
young man with sandy blond hair and dressed in an emerald-green
bodysuit walked out and made his way to the stage. Lithely, the
young man climbed the long aerial ribbon, and then swung his agile
athletic body across to the right-hand trapeze and positioned
himself. Once he was situated in the center of the bar, the music
began, resonating from the room’s sound system and drawing the
complete attention of the room’s occupants. Roman vaguely
recognized the song as a recent popular hit; the song was called
“Stay,” if he remembered correctly, and as the keys of the piano
intro played, a petite woman also walked confidently across the
floor. She strode up the four stairs that led to the center stage
and her palm blindly reached out, absently stroking the silk of the
ribbon in a tender caress. She stood poised; a brilliant smile lit
her angelic face as her gaze swept the room.

Just South of Rome by Judy Nunn
Persuading Him by Michelle Dare
The Crown and the Dragon by John D. Payne
A Whole Life by Seethaler, Robert
Lives We Lost,The by Megan Crewe
Analog Science Fiction And Fact - June 2014 by Penny Publications
Fenella J Miller - [Duke 02] by Bride for a Duke
Bayou My Love: A Novel by Faulkenberry, Lauren
His Untamed Desire by Katie Reus
Desert Fire by David Hagberg
Our partner