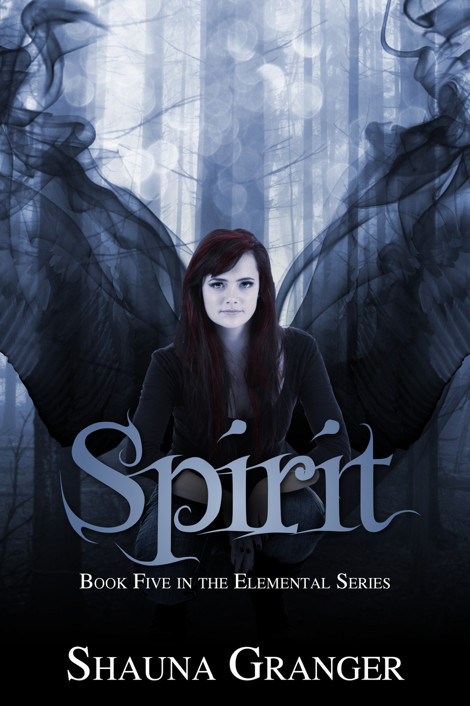 Book
Five in the Elemental Series

This is a work of fiction. Names, characters,
places and incidents either are the product of the author’s imagination or are
used fictitiously and any resemblance to actual persons, living or dead,
business establishments, events or locales is entirely coincidental.

All rights
reserved. No part of this publication may be reproduced, stored in a retrieval
system, or transmitted, in any form or by any means, electronic, mechanical,
photocopying, recording, or otherwise, without prior written permission from
the author.

For everyone
who has come

on this
journey with Shayna, Jodi and Steven.

More than two
hundred homes and two thousand square acres were destroyed in the fire. Two
people were severely burned, but they survived. Amazingly, no one died. At
least, that’s what the papers reported. They never found my body, and they
looked for days. I know; I watched them search for me. I had always said I
wanted to be cremated when I died, asking to have my ashes scattered at the
roots of an old tree, but being burned alive was not what I had in mind.

My parents held
my memorial outdoors, on the beach. Search and rescue told my parents it was
too soon to be completely conclusive about my whereabouts, but after seeing the
site where Jodi and Steven said I’d died, my parents came to the hard decision
that I was, more than likely, gone.

A pack of
surfers I had known since childhood paddled out to sea, each bearing a flower
wreath. Once they were past the last break of waves, they cast the flowers into
the ocean, letting the ebb and flow of Earth and sea take them. The beach was covered
in black from mourners milling around, huddled against the winter bite in the
breeze.

Deb had brought
her entire coven to show their respects. Little Trisity clung to Deb’s hand
while tears streamed down her face, her aura a pale gray obscuring her sweet
face. Deb lifted her up and held her on her hip, letting Trisity cry into her
shoulder as she made her way to my parents. Half the senior class had turned
out in a wash of black, white, and gray; even a few teachers were in
attendance. I had no idea so many people had known me. A huge, obnoxious
picture of me stood on an easel, flowers littering the ground around it. Beside
it, my surfboard stood, jammed in the sand.

Jodi and Steven
received just as many hugs and whispered condolences as my parents. Their faces
were dry of tears. Jodi looked hard and determined, as though an idea had taken
root in her mind and she was unaware of her surroundings, whereas Steven looked
distant, the fire in his eyes banked to cold embers. They accepted the hugs and
nodded at the words, but otherwise they weren’t truly present. I felt Jodi’s
uncontrolled magic, the sudden gusts of wind whipping her signature around,
making the mourners cling to their coats and inch closer to each other.

Jensen was there,
wrapped in a black peacoat and wearing a grey beanie pulled low over his ears.
His hands were jammed into his coat pockets, and his tiny mother was next to
him, her arm linked through the crook of Jensen’s elbow. I traced the line of
his profile with my eyes, remembering the heat of his full, red lips and the
sharp lines of his cheekbones under my fingers. An ache blossomed in my chest
as I waited for him to turn toward me, let me see the stormy ocean of his eyes,
but he never did.

I stood alone on
the rocks, watching from a distance. I found when I came too close to those who
had loved me in life, I stole what little peace they’d carved out for
themselves. Any calm or happiness they had found would seep away, the color of
their aura draining to gray. I was a wraith, bound to the shadows, trying to
find my way home.

I had spent my
time in the Ether, somewhere between the living and the dead, hiding and
running from that which would take me from this plane. I’d seen the bright Light,
the tunnel, felt the inexplicable compulsion drawing me toward it. I felt the
peace it offered. It felt like home. And I turned away from it.

It was strange,
watching those people, so close to them but totally apart. Even at this distance,
I saw Death’s next victims. Everyone was marked for death, but the closer they came
to it, the darker the mark grew over their bodies. It was a cancer that made
the soul rip away from the body. I saw lung cancer creeping up on my English
teacher. In another year’s time, he would know about his diminishing chances of
beating it. One of Deb’s sisters stood with the shadow of Death looming over
her shoulder, ready to snatch her away in a few weeks when she stepped off that
curb just fifteen seconds too soon because she was digging through her purse
with her phone braced between her cheek and shoulder. I was so close and yet so
far away. I couldn’t warn them though the words screamed in my mind. I felt the
phantom weight of my wings on my back, but I knew they weren’t there. When I
died and turned away from the Light, they were ripped violently away from me.

Thankfully, when
I looked at my parents they were crystal clear, no shadow looming over them. In
time, the grey of their auras would clear and resonate in the rainbow spectrum
as they should. But when I looked at Jodi and Steven I saw the merest whisper
of a shadow. It blurred against their gray auras, but when they moved I saw it
and panic nearly strangled me. But what could I do?

I turned to Jodi
and watched her face, seeing the peaches and cream complexion drained to pale
anger. My fingers twitched with the desire to wave to her, get her attention,
make her see me even though I knew it was futile. Steven had turned his back on
the congregation, looking out to the sea that usually terrified him, but today
nothing scared him, nothing moved him. I sighed even though I no longer
breathed, and when I pulled my gaze off of the back of Steven’s head,
remembering how soft the curl of his hair felt under my fingers, I looked into
Jodi’s eyes.

For one heart
stopping moment, she stared right back at me.

Her pale blue
eyes didn’t blink, the line of her mouth pressed hard and angry. I started to
open my mouth to call out to her, but before I could, I heard the crunch of
rocks behind me, making me break our eye contact. I spun around and saw the
angel terrifyingly close to me.

“No!” I yelled,
jumping from the rocks. I took off running, faster than I ever could in life. I
prayed for my wings, willed them into existence, but the pain never came and my
back remained whole and unmarred. I heard the thunder clap behind me,
reverberating as his wings erupted just before he took flight, chasing me.

Fear ripped
through me, threatening to trip me up. I felt the Heavens opening behind me,
the warm light pressing against my back, growing warmer the closer the angel’s
outstretched hand got to me. I closed my eyes and drew in the shadows of the
rocks around me, turned on the spot, and let my body fall. The shadows wrapped
around me and pulled me through the cosmos just as the tips of the angel’s
fingers touched my sweater.

I thought about
my house, my bedroom, the pentagram chalked under the area rug, the smell of vanilla
candles and cream and sugared coffee. I felt like I was caught in a cyclone of
wind and power as my body spun around until I tumbled into existence again in
the shadowy corner of my bedroom.

I had discovered
I could travel through shadows the first time I ran away from my guardian angel.
In my terror of being ripped from this world, I had closed my eyes, dove
forward out of his reach, and felt the shadows take me. They had spit me out in
front of the first place I had thought of: The Oak, Ash and Thorn.

Letting the
shadows fall behind me, I stepped out of the corner into the center of my bedroom
and looked around; it was exactly as I had left it only days before. My parents
hadn’t touched anything. Without a body to dress, they hadn’t even needed to go
through my clothes. I stood in front of my dresser with the large mirror
propped up on it. I half expected to see my reflection, but only empty glass
stood in front of me. I reached out to touch the pentacle necklace Deb had
given me for Solstice, but my fingers went right through it, into the wood of
the dresser.

“Ugh!” I roared,
my anger making the lamp on my desk flicker to life momentarily, and I felt a
faint pinch of pain behind my eyes. Clenching my fists at my sides, I turned
away from the empty mirror and the dresser top covered in treasures I may never
touch again.

On my desk, my
grimoire lay open to the page with the notes of my mother’s fiery nightmare. I
shook my head and turned away from that as well. It was just a reminder of how
stupid and cavalier I had been in life. As if I had been an invincible force, undefeatable
and untouchable. I mean, angels can’t die, right? Apparently they could.

I wrapped my
arms around myself, hugging myself against a chill that always creeped up on
me. I had a feeling that if I hadn’t turned my back on the Light, on the
reaching hand of my guardian angel, I would never feel cold again. But I had
and there was nothing for it. I didn’t want to go to Heaven, or whatever waited
for me at the other side of that Light. I wasn’t ready for this life to be
over. I had to find a way back into the physical plane. I had to find a way to
come back to life.
Moving
on was the natural way of things for people who were meant to die, but I
wasn’t. I couldn’t have been. Jodi and Steven still needed me.

A CRY FROM THE DEEP by Unknown
Romance: Welcome to Zombie Island: A Tale of Zombie Romance and Survival (Post-Apocalyptic, Zombie, Spirit, Survival) by Nixon, Natalie
Crossing on the Paris by Dana Gynther
The Griffin's Flight by Taylor, K.J.
The Queen and Lord M by Jean Plaidy
Horse Fever by Bonnie Bryant
A Fisherman of the Inland Sea: Stories by Ursula K. Le Guin
Kicker (DS Fight Club Book 1) by Josie Kerr
Merciless by Mary Burton
The Two Worlds by James P. Hogan
Our partner