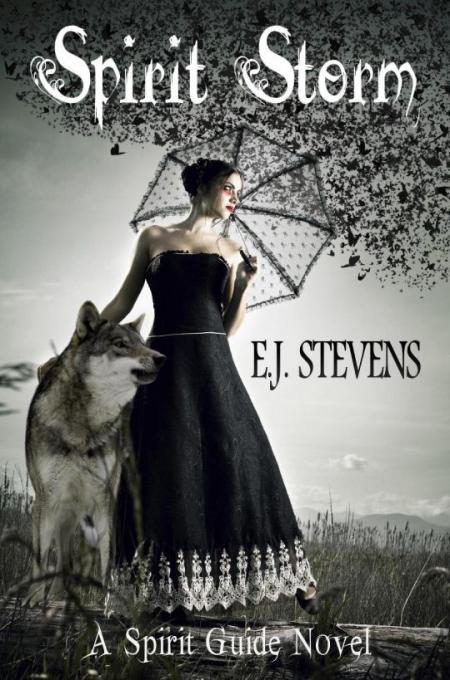 Praise for the Spirit Guide Series

She Smells the Dead

"She Smells the Dead provides something new and fresh to the YA realm."

"This series is like Nancy Drew meets the Winchester Brother's from Supernatural."

-Natalie, I'd So Rather Be Reading

"I absolutely loved every last delicious page of She Smells the Dead!"

"If you love ghosts, Goths, and a little bit of YA romance, you will want to check this book out."

"Part mystery, part adventure, part romance and all the things a reader wants."

-Mechele, Read For Your Future

"These characters are so unique and fun to follow."

-Amber, The Musings of Alymbnenr

"I haven't read a truly great YA paranormal in more years than I can remember, and Ms. Stevens delivers the most well written tale imaginable!"

-Tamela Quijas, At Your Fingertips

She Smells the Dead

Shadows of Myth and Legend

This ebook is licensed for your personal enjoyment only. This ebook may not be re-sold or given

away to other people. If you would like to share this book with another person, please purchase

an additional copy for each person. If you’re reading this book and did not purchase it, or it was

not purchased for your use only, then please return to Smashwords.com and purchase your own

copy. Thank you for respecting the hard work of this author.

“A Pox Upon All Thieves,” read the sign hanging at eye level on the wall behind the glass case. I stifled a shudder and tried to distract myself from the task at hand. I was about to attempt grand theft amulet from an occult shop known to be run by witches.
Son of a dung beetle. How did I get myself into this mess?

The words were painted in an old-fashioned font and the sign was covered in a false patina of age. My mind latched onto an old memory of my grandmother teaching me the tricks of tole painting. I remember her patiently demonstrating the technique of speckling, layering, and then using tea for the finishing touch.

“See it’s nothing,” my mind screamed desperately. “It’s not even old.” Old or not, the sign still filled me with dread.

I was grasping for anything which might distract me, but thoughts of my grandmother only deepened my sense of guilt. I may be rebellious, but I wasn’t the kind of girl to steal from anyone. Except now. I felt like I was on a slippery slope to Hell.
Good thing I wore my boots.

I shivered as Calvin ran his hand down my cheek and not from the cool autumn breeze swirling leaves around the school parking lot. I pressed myself against him, a little voice in the back of my head only slightly concerned I might impale him on one of the many safety pins covering my shirt. He tilted my head back and leaned in to kiss me.
I am so in love with you Calvin Miller.

As our lips touched I felt a vibrating against my hip that didn’t have anything to do with love or raging hormones.

“Sorry,” Cal mumbled against my lips as he reached for his phone. The sleeve of his frayed sweater caught on one of my safety pins and his phone went flying onto the pavement.

“I guess I’m the one that’s sorry,” I said trying to extract his sweater from my shirt.

“I meant to ask earlier,” he said, raising an eyebrow. “Is there a reason why you’re wearing about ten pounds of safety pins today?”

I laughed, still attempting to unhook the threads of his sweater. I was tempted to grab clippers from my backpack, but was trying to lessen the damage. Not that I minded being attached to Cal.
Not at all.

“Emma and I were doing more research and some people believe iron and steel help to repel spirits,” I answered.

“I thought that was just for fairies,” he said.

“Well, it depends on the source,” I said. “Some of the books and Internet sites claim that iron and steel also hurts the dead. Other sources even claim fairies actually are spirits. Hence, my crazy awesome safety pin shirt.”

“So it’s kind of like chain mail for spirits,” he said.

“Exactly,” I said, finally pulling the last strand of yarn from the offending pin. “There, you’re free wolf boy.”

Calvin reached down for his phone, but froze part way. His phone was open and the picture which had been sent to him was on the screen. My brain was having trouble processing what I was looking at. There was fur, and limbs, and…oh God, there was the glassy eye of a dead wolf. I looked up at Cal’s face and could tell the wolf must have been one of the members of his pack. Something bad had happened.
Something very, very bad.

Cal’s phone suddenly started vibrating, making it dance epileptically along the pavement, and we both nearly jumped out of our skins.
Oh why did my mind have to conjure up
that
image?

With a shudder, Calvin reached down and grabbed the phone. Pressing the button to answer he closed his eyes and brought the phone to his ear. “Simon?” Cal asked.

“Right on one,” Simon quipped, though his tone quickly turned serious. “We have a problem. Did you get the photo I sent you?”

“Yeah, it just came through,” Cal said. “Is…is it what it looks like?”

I watched Cal’s Adam’s apple rise and fall with his swallowing. He was obviously trying to keep it together and avoid being sick. I really hoped he managed to control the gorge rising in his throat. Some people are social yawners, but I have the unpleasant habit of social yacking. If Cal puked, I was so totally going to start uncontrollably puking on his shoes. Hurling on my boyfriend would definitely not help this situation.
You better not throw up Calvin Miller.

“Do we know who it is?” Cal asked. He didn’t ask if the wolf was one of the Old Blood.
He already knew.

“Looks like he was an accountant named Gavin Sanders,” Simon replied. “He worked in the city and would come out here to the woods on his way home at the end of the work week and go for a run in wolf form. His way to unwind, I guess. I found a pile of his clothes, folded neatly, with his wallet, phone, and car keys not far from where he parked on the road. I’ll have to go back and do some more tracking, but it smells like he was followed into the woods. Someone must have known his routine.”

“And that he was a werewolf,” Cal said, voicing what Simon must have been thinking.

“Aye, it seems that way,” Simon said with a sigh. “I’ll sniff around a bit more and see what turns up.”

“Thanks Simon,” Cal said. “I’ll head home and start calling the others. We need to warn everyone that there may be someone hunting us.”

Simon made a growling sound in the affirmative and hung up. Calvin stood frozen with his phone in a white knuckled grip still held to his ear. I stepped forward and reached up to touch his hand.

His eyes were still closed, but he flinched and began to slowly open them. I once read an ostrich will hide its head to avoid seeing danger. Calvin appeared to be doing something similar. Unfortunately danger wasn’t something you could avoid by keeping your eyes shut.
I should know.

“Come on,” I said, holding his hand. “Let’s go sit down in your truck. We can come up with a plan and if you’re too freaked out to drive I’ll call Emma. She can come pick us up.”

Calvin nodded, but his eyes were unfocused and I could tell he was in shock. He let me lead him to his truck where I grabbed the spare key and opened his door. He stepped inside and sat behind the wheel while I raced around to the passenger door and climbed into the truck cab.
What should I do now?

I sat there awash in wet dog smell wondering what I could possibly do to help. Over the past few weeks I had noticed Calvin gave off the smell more when he was stressed. Seeing the picture of a dead man definitely ranked high on the stress meter. I just hoped Cal could retain enough control to remain in human form. His alpha status and Simon’s training helped, but that didn’t change the fact that many of the Old Blood shifted during times of extreme duress.

Cal already had a close call with shifting into wolf form on school grounds. During the Homecoming dance I had made the mistake of letting loose on the dance floor which inadvertently called out to Calvin’s wolf spirit. He had begun to transform right there in the school gymnasium and we only managed to escape with the help of our best friend Emma.
But not everyone escaped unscathed.

Cal had been injured, breaking his arm or foreleg as it was at the time, and though he was healing quickly I could tell his arm was still tender. The worst wounds from that night weren’t physical. We all blamed ourselves for what happened and none of us would easily forget the events of Homecoming and the disaster only barely averted. I had promised myself I would never let something like that happen again, but I wasn’t sure what to do next. I was supposed to be the anchor that kept Cal from losing touch with his human self. We were soul mates.
Soul mates.

I suddenly knew what to do. I reached down and dragged my backpack up onto the bench seat. Pulling out books and notepads I found what I was looking for. I lifted a half-eaten sandwich from the plastic bag and jumped out of the truck. I peeled the bread away, letting the cheese fall with a slap to the pavement, and started crumbling and tossing the bread in a circle around the truck. I wasn’t sure if this would work, but I would take all the help we could get.
Not really feeling choosy.

A few weeks ago, while training with Simon, I had learned crows have a special relationship with wolves. In the wild, crows will lead wolves to a food source and have been known to warn them of danger. I didn’t know if the crows could help if the danger to Cal happened to be his own wolf spirit, but my frenzied brain logic thought it was worth a shot. I continued to scatter bread in a circle around Cal’s truck. When I ran out of bread I tried to think of some other offering. I looked down at myself and smiled. Crows like shiny objects. I stood in front of Calvin’s truck with my arms open wide, sun shining on my metal shirt. It was a good day for being covered in safety pins.