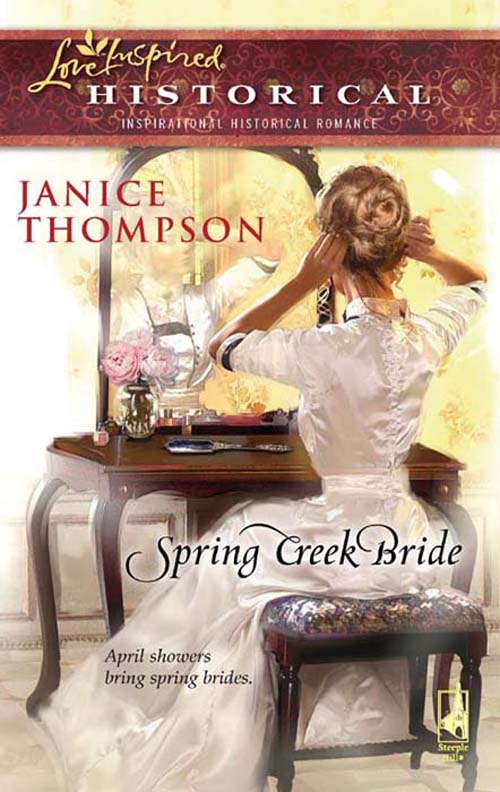 In fact, she could scarcely breathe as she took him in. Funny, standing here in this close proximity, he didn’t look like the criminal sort at all. But you could never tell with wolves, especially those so carefully disguised. She was a strong woman. She could overlook his attractions with little trouble.

“I know who you are, Mr. Bradley,” Ida replied.

“And you are?” he asked, extending his hand.

Ida didn’t want to answer his question, and yet her hand clasped his and her mouth spoke the words. “Ida Mueller.”

“It’s a real pleasure, Miss Mueller,” he said, tipping his hat and holding on to her hand. For a moment, she was lost in his gray eyes, until Sophie cleared her throat, reminding Ida of her manners.

She quickly removed her hand from his.

is a Christian freelance author and a native Texan. She resides in Spring, Texas, near her grown children and infant granddaughters. Her family is active in ministry, primarily writing, music, drama and evangelism. Janice started penning books at a young age, and was blessed to have a screenplay produced in the early 80s. From there, she went on to write several large-scale musicals. Currently, she has published more than thirty full-length novels and nonfiction books (most lighthearted and/or wedding themed). She’s thankful for her calling as an author of Christian fiction and knows the Lord has brought her to this point so that she can present stories that will change people’s lives. Romances come naturally to Janice, since she’s coordinated nearly a dozen weddings, including recent ceremonies and receptions for all four of her daughters.

Who knows whether you have come to
the kingdom for such a time as this?

In memory of my father, Billy Hanna—
a small-town man with a big-as-Texas heart.

To my agent, Chip MacGregor: You are a godsend. Thanks for believing in me and special thanks for finding just the right house for this story.

To Krista Stroever: Thank you so much for the opportunity to write for Steeple Hill Books. You helped make a long-term dream come true. I appreciate your patience with the process. You’re a true mentor.

To Louise Rozett, my line editor: Thanks for the spit-shine. You walked me through my first copy edit at a new company, and I’m so grateful.

To my wonderful critique partners, Kathleen Y’Barbo, Martha Rogers, Marcia Gruver and Linda Kozar: Thanks for falling in love with my hometown of Spring, Texas, with me! Here’s to lunch at Wunsche Brothers Café! Let’s meet there again…soon!

To the people of Spring, Texas (past and present): You have left your mark on my soul.

I
da Mueller pressed a lock of unruly hair behind her ear and rounded the large dining table with a chipped serving bowl in hand. Chair legs scraped against the wood-planked floor as the rowdy lumber-mill workers rushed to sit down for another one of her home-cooked meals. She couldn’t help but smile at their enthusiasm.

“Smells good enough to eat!” one of the younger fellows joked.

Ida plopped a spoonful of crisp fried potatoes onto his plate and kept moving as she responded. “You’ve eaten at my table every day for nearly a year, Carl Walken, and you haven’t found reason to complain yet.” She reached up with the back of her hand and wiped a bit of perspiration from her brow.

His eyebrows lifted mischievously. “Ain’t just the food keeps me coming back.” A playful wink followed.

“Ya reckon?” Another of the men elbowed him.

Several of the fellows let out whistles and Ida felt her cheeks turn warm. She scurried to the opposite side of the room and continued on with the chore of feeding the work crew, trying to ignore their usual flirtatious ways.

“None of that now.” Her father’s stern voice rang out from the head of the table. He always knew how to keep his men in line, especially when it came to his daughter.

“Aw, Mr. Mueller,” one of the fellows groaned. “You never let us have any fun.”

“Better mind your p’s and q’s,” Ida quipped. “I’ve got a platter of Wiener schnitzel in the kitchen, but I’ve half a mind not to serve it.”

The men took to hearty grumbling and she returned to the kitchen for the cumbersome platter of meat. For a moment—just a moment—she leaned against the countertop and drew in a deep breath. The south Texas heat wrapped itself around her like a dressing gown.

On days like this, she missed her mama more than ever. Seven years as the woman of the house had scarcely proven Ida worthy of filling her mother’s shoes. Papa offered plenty of encouragement, but she struggled daily to keep up with caring for her home, her father and a crew of ravenous workers. And she fought to overcome the grief of losing the one person a girl depended on above all others—her mother. Oh, how she longed for what she could not have.

“I need you, Mama,” she whispered. Indeed, at nineteen, Ida found herself in need of a great many things that only a mother could offer. But she had to rely on Papa’s manly advice, and cope with the ever-present teasing from the lumber-mill workers, a daily reminder that she, a lone female, resided in a world of men.

“Mama, I don’t know how you did it.” She whispered the familiar words as she snatched up the plate full of Wiener schnitzel and headed back into the dining room once again.

As she came around the corner, Ida caught a glimpse of her uncontrollable blond hair in the elegant carved mirror that hung above the buffet. Frustrated, she reminded herself to deal with it after feeding the crew. How any of the men could find her attractive was a mystery, to her way of thinking.

Aunt Dinah would never let her hear the end of it if she didn’t start taking better care of herself. Ever the proper lady, Ida’s best friend and confidant was of the notion that a woman should be able to handle a full day’s work, a brisk walk to town to help tend the family store and an hour’s Bible reading in the evenings, with time left over for necessary grooming. All in the hopes of acquiring the one thing Ida wasn’t sure she wanted—a husband.

Ida remained convinced she would never find a man who even came close to the one she held in the highest esteem—her papa. He was strong spirited, full of goodness and had a heart like a jewel. No,
surely such a fellow did not exist. And if he did, he certainly didn’t appear to be seated at this table.

“Thinkin’ I’m hungry?” Carl asked. Ida looked down, shocked to see that she had placed five large slabs of veal steak on his plate.

Her father’s eyebrows arched as if to ask,
Where is your head today, daughter?

She lifted three of the pieces of meat from Carl’s plate. “I knew you had a taste for my cooking, is all.”

With fork in one hand and knife in the other, the young man dove into the food. The others followed suit and the air soon filled with the sounds of chomping and cutting.

Her father cleared his throat quite loudly and Ida anticipated his next words.

“I don’t believe we’ve thanked the Almighty yet.” His voice deepened in reverence. “So you’ll be putting down those utensils, gentlemen, or there will be no dinner for you today. Or any other day, for that matter.”

They complied with sheepish grins, as always.

Ida noticed that her father’s German accent became stronger as his prayer began. “Almighty God, Maker of heaven and earth, we thank Thee for this, Thy bounty. For Thy goodness is everlasting, from generation to generation, and Thy blessings overflow. Be with each of these men today as they seek to serve Thee with their labors. Amen.”

“Amen,” the men echoed, then tore into their food once again.

Ida slipped away into the kitchen, anxious for another moment’s peace. Perhaps here she could think clearly. Once the dishes were done, of course.

She worked at a steady pace, allowing her thoughts to drift until a familiar shrill whistle signaled a train’s arrival. The afternoon run from Fort Worth came like clockwork at one-thirty, just as she finished the dishes. Some things could be depended on.

Mick Bradley peered out of the grimy train window and took in his first glimpse of Spring Creek, Texas. Not quite what he had pictured and a sure sight hotter. He pulled a handkerchief from his pocket and dragged it across the back of his neck to remove the moisture. No point arriving in town looking like a vagabond. Not with so much at stake.

As the train crawled into the station, the porter approached, pocket watch in hand. “Just a few more minutes, sir.”

Mick nodded in his direction, but said nothing as he took in the sights of his new home. Off in the distance a large hotel with a freshly painted sign greeted him. Sellers Hotel. And to his right, The Harvey House. After locating a barbershop, he’d have to settle on one or the other.

A bustling mercantile appeared to be doing quite a good business. Shoppers scurried to and fro with packages, stirring up dust on the street. A couple of
women were about, but for the most part, he only saw men. Hundreds of men.

Yes, the booming little town of Spring Creek must surely need his services.

Mick’s brow furrowed as he counted the saloons. He strained to see a bit farther down the street. Three? In such a small area? Their owners would be a source of contention, no doubt. Surely they would seek to complicate his plans to build a new gambling hall.

But he had encountered plenty of trouble when he opened his first place up North. These Texans couldn’t be any worse than Chicago’s most notorious, whom he’d handled with ease.

At that moment, two men took to brawling in the middle of the street, not twenty feet from the jailhouse. The taller, more muscular man clearly had the upper hand. A crowd gathered round, cheering them on. Before long, the two were on the ground, tussling. They went at it, cheek to fist, until one of them was knocked out. With such a large group about, Mick couldn’t tell which one had taken the fall, but it must surely be the smaller of the two. That’s how life was, after all. The boisterous crowd thinned as it declared a victor and the short man stood and raised his fist in the air with a triumphant shout.

Maybe these Texans weren’t going to be so easy after all.

The passenger in the seat next to him stood and gave a polite nod as the train came to a stop. Mick returned the gesture and rose to his feet. His back
ached from sitting so long and his cramped legs begged for a good, long walk. How many trains had he boarded over the past several days? Somewhere between Illinois and Texas he’d simply lost count.

The next few months would give him plenty of opportunity to stay put, however. He had his work cut out for him. And before long, he would be the talk of the town.

Probably sooner rather than later.