Read Spy in the Alley Online

Spy in the Alley 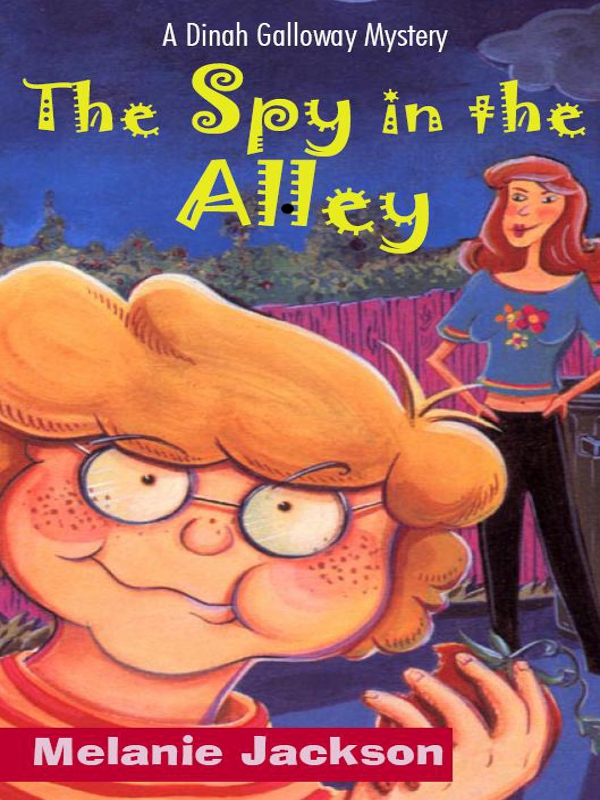 The Spy in the Alley

The spy in the alley
(A Dinah Galloway mystery; 1)

Orca Book Publishers gratefully acknowledges the support for our publishing programs provided by the following agencies: The Government of Canada through the Book Publishing Industry Development Program (BPIDP), The Canada Council for the Arts, and the British Columbia Arts Council.

To Bart and Sarah-Nelle Jackson
MJ

It began with Wilfred the cat, though my sister
Madge insists she started it by leaving the back
door open. Wilfred wouldn't have been able to get
out otherwise, she says.

That's Madge for you. She has to be the center
of any story. I guess it's because she's so pretty,
with her burnished red hair, lupine-blue eyes and
smooth, porcelain skin. It would be hard not to
believe you were the center of attention, looking
like that.

“My hair is auburn,” says Madge, miffed. She's
peering over my shoulder at the computer screen,
where I'm writing this.

Well, she's part of the story, I'll give her that.
And, by letting Wilfred go, she set things off: the
discovery of the bucktoothed spy and the mysterious thefts, not to mention the high-speed chases.
(Okay, so the chases were on foot. They were still
high-speed.)

But I still think it was Wilfred who actually
started it. Madge may be pretty, but I'm pretty
stubborn.

Now Madge is insisting that, since I can't
get the color of her hair right, there are parts of
the story she had better check over. Oh, all right,
Madge. I will certainly listen to any critiques you
have to make (though not, ahem, necessarily pay
attention to them).

Let's see, we'll call this file The Spy in the Ally.

“How melodramatic,” scoffs Madge. “And
that's not how you spell âalley.'”

Anyway, this is how it all began.

The back door was propped open with a cast-iron John A. Macdonald piggy bank that Mother had bought ages ago at an antique store on Commercial Drive. John A's hand was raised, as if our first prime minister were making a point, perhaps while debating a bill in the House of Commons. No one cared enough to ponder what his point might be; we just used him as a doorstop.

Madge brushed past John A. Macdonald and into the kitchen with a bowl of blackberries she'd just picked in the alley. I'd picked some, too, that hot August afternoon, but I'd returned with my bowl empty.

Madge surveyed the blackberry-stained teeth and tongue I displayed for her. She observed coolly, “No self-discipline as usual, Dinah. I'm going to make pies with
my
blackberries, one for us and one for old Mrs. Gumboldt.”

I'd been busy downloading the latest version of my favorite computer game
, Deathstalkers at
Zero Hour
, when part of her sentence struck me. Not the part about nice Mrs. Gumboldt, a church friend of our mother's. The other part. I used the hem of my T-shirt to wipe blackberry juice from my lenses. “Pie. That means Roderick's coming for dinner, right?”

I sighed. Roderick Wellman, Madge's boyfriend, was my deadly foe. So conceited. So stuffed-shirtish. Such a
dweeb
. Roderick's dad owned the agency Madge often modeled for. Or with. Or whatever. Madge's modeling money helped pay the bills, as Mother often reminded me â for instance, after I'd dumped salt in Roderick's coffee when he was looking the other way.

And, Madge's modeling money would help pay for me to go to university, Mother would add. She and Madge were bent on my having this great halls-of-academe experience, just because teachers kept assuring them I had high potential. Or, I sometimes thought wistfully, maybe because, freckled and bespectacled, I would never be pretty like Madge and able to model.

Madge wanted to go to art college after she finished high school. You might say that while I listened to teachers, she
drew
them. Her talent at art worked for her in art class, needless to say, and even to some extent in science â but in subjects like math â¦ um, no. Madge was sixteen; I was eleven. This didn't stop Madge and Mother from doing an awful lot of planning ahead.

To me, the future was fuzzy: it was impossible to believe that the three of us, plus Wilfred, would ever do anything other than live happily in our creaky Victorian barn of a house on Wisteria Street, on the big Grandview hill in Vancouver. I preferred to concentrate on the present, particularly on sinister elements of it â namely, Roderick Wellman.

“Yes, Roderick
is
coming for dinner,” responded Madge, placing the blackberries on the kitchen counter. She pushed back a wave of auburn hair. Even on a day like this, Madge was unruffled, un-hot and unbothered. She shrugged. “You could always stay in your room.”

“In case I haven't made this clear before, Roderick is a dw â ” I began, but it was then that Wilfred tore through the kitchen and out the back door.

We gaped after him. This was not like Wilfred. Our fluffy white-and-pumpkin-colored cat was notoriously cowardly: if anyone even sneezed, he'd disappear under the bed for an hour. Plus, he was an indoor cat.

We went to the door and stared out at the long path, overgrown with hydrangea, that led alongside the garage to the back gate of our high fence. The bushes were rustling wildly. A monarch butterfly zoomed out; then, a fluffy white-and-pumpkin-colored paw thrust after it, scattering violet hydrangea petals.

Madge and I looked at each other.

“Wilfred has finally found something he's not afraid of,” I commented.

“Wilfred the Brave,” said Madge. “You'd bet>ter go after him, Dinah. You-know-who is lurking nearby.”

You-know-who was a lean, mean, gray tabby from three houses down. He had a reputation for shredding other cats, so that what was left of them limped back to their owners and then to long, expensive stays at the vet's.

The tabby often sat on our fence, peering in the window, yowling threateningly at Wilfred. Till now he'd never had the chance to get at him.

“Why can't
you
go?” I demanded angrily. “I'm busy downloading.”

Madge cast a scornful glance at the rockets soaring and exploding on screen. “I couldn't possibly go prowling through the undergrowth in this,” she said, preening slightly in her cucumber-colored sleeveless blouse and matching shorts.

“You went prowling through the alley for blackberries to put in
dear
Roddy's pie,” I retorted. But in my blackberry-stained T-shirt I knew I was on shaky ground.

Madge sauntered off, humming; muttering foul things about her, I stomped outside to retrieve Wilfred.

We never used the back gate. Mother had long ago clamped a lock, now rusty, on its latch, in the theory that burglars would be unable to gain access to our house from the back. For blackberry excursions, I either walked around by the street or, preferably, took a shortcut through one of the neighbors' gardens. Trespassing is much more satisfying, I find.

For that reason, when I say the path to the gate was overgrown, I don't mean slightly unkempt. I mean almost obliterated. Tall, tough green weeds had sprouted to mix in with the foxgloves that grew happily there, and with the thick, overlapping hydrangeas currently in full bloom. Together, all these formed quite the jungle.

I pushed the outer edge of hydrangeas aside. Wilfred blinked up at me in surprise.

He took off. My authoritative tone needed a bit of work.

Gritting my teeth, I stepped into our mini-jungle. Those first hydrangeas flapped back into place behind me. I could feel the sun on the back of my neck, but in front of me, as I proceeded in bent, cat-catching posture, there was just a haze of green. Through it the hydrangeas glowed intermittently, like violet traffic signals.

I saw Wilfred's tail disappearing between some foxgloves. I was sure that, being fluffy, it and the rest of Wilfred were gathering up every bug, nettle, burr and leaf imaginable. Well, Madge was going to be the one who had to comb him and flea-bath him, I vowed, fuming, as a prickly blackberry branch scraped me from hand to elbow.

The blackberry bushes grew along the alley, which meant that I must be getting pretty close to the back gate. The branch that had got me would have burrowed its way through the gate.

“Now Wilfred,” I said. My tone was anything but cajoling, and I couldn't really blame Wilfred for not leaping joyfully into my arms.

Time to give up. Wilfred would come back in his own time. Cats always came back, didn't they? The song said they did. Besides, my glasses were steaming up from being in that hothouse of flowers and weeds. Removing the glasses, I began to wipe them off on my T-shirt. Suddenly, past the foxgloves, a rustle.

“Wilfred?” I parted the foxgloves.

Even with my glasses off, I could tell that the white feet in front of me were far too big to be paws. I slid my glasses back on and the feet turned into running shoes. I looked up, past khaki pants and a white shirt blotted with perspiration, to a powder-blue sun-hatted, bucktoothed young man holding binoculars.

He was
spying
on us.

I was so indignant that I forgot all the safety warnings about never confronting intruders. I stood up, through the flowers, branches and stalks, and glared at him. The young man drew back his lips and sneered, displaying his buckteeth even more prominently. “You must be a younger sister or something,” he said. “You're obviously not the glamorous Madge Galloway, the well-known local model.”

He jammed the binoculars into a fraying leather pouch around his skinny waist. Then, wrenching the gate open, he pelted out into the alley.

In a bit of a pickle in the tomato patch

His buckteeth glinted in the sun as he glanced back with a panicky expression from beneath his dorky, floppy blue sun hat at the plump, scowling, soon-to-be seventh grader pounding after him down the alley.

He heaved something at me and I heard it clatter by my feet. The lock to our back gate! And so rusted that Buckteeth probably could have broken it by
breathing
on it.

Ahead of me, with a sideways dive that resembled a clumsy cartwheel, Buckteeth plunged into the Rinaldis' tomato patch. I ran after him.

Squelch, squelch! He'd jarred some of the tomatoes loose and was trampling on them. I peered through the stalks, able to hear him but not see him. Yet another disadvantage to being short. Why oh why had Madge got the willowy tallness, and not me? On the other hand, being short meant I could slip through the tomato stalks after him undetected.

I hesitated, a rare prudent impulse overtaking me. Maybe I shouldn't try to take on this spy myself.