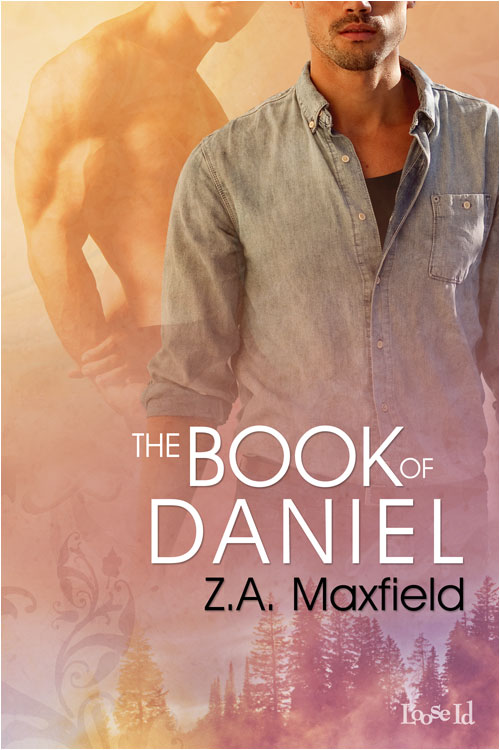 The Book of Daniel

For everyone who has ever wanted a little St. Nacho's of their own.

I grinned when the waiter brought me a clean ashtray. It was a Monday kind of grin. It was an I-got-drunk-and-stoned-and-screwed-around-all-weekend, barely-crawled-out-of-bed lift of the muscles that parenthesize my lips. On a dog, you’d call it fair warning.

I’d been having a lot of Mondays like that. I’d even hit the trifecta of fucked-up Monday mornings the week before when I’d woken up in a stranger’s home in Santa Monica with no memory and a really kickass kanji tattoo on my right shoulder.

I had no idea what it meant, but it looked good.

And maybe my brother Jake would have had a thing or two to say about that sort of shit if I let him in on it, like…maybe he’d have said I’m not a shallow guy and I’m just having a midlife crisis, but I am and I’m not, respectively. I was on the trail of tears to forty, newly divorced, newly out and proud, and I didn’t give a damn.

It wasn’t like I hadn’t tried to do everything right, because I
had
tried. Hard. I’d made my mother happy when she was alive. I’d treated my wife well even though she left me for some other asshole, thank fuck. I’d let her get away with the house, her car, and an income, because I was not a monster. My father was a monster, and I knew what one of those was like.

So really, I was not a monster.

I was just a guy who finally, finally had the chance to get it right. And it was my turn to pick and choose.

My second vodka Mary had appeared on the table next to my good elbow while I’d been sitting there, eyes closed, drifting. Enjoying the buzz from my first drink and the warm flush of nicotine.

The sound of the waves hitting the sand behind me was soothing. It interspersed with children playing, the sound of two or three portable radios, and seabirds. As grim as the morning had started out, the day promised high temperatures. People had come early, prepared to stake out their territory and wait for the sun to burn off the clouds. I could feel its radiant warmth on my face and shoulders even though the light breeze off the water was chilly.

I ate my olive slowly, savoring its salty, bitter aftertaste. The chair was comfortable. I found if I crossed my feet at the ankles and slunk down a bit, it supported my head and shoulders and I could avoid that sprawled, knees-splayed appearance while I relaxed…

I shook my head. Hell no I wasn’t asleep. I was just resting my eyes.
Wasn’t I
? A quick scan of my surroundings revealed my cigarette had burned to ash and my drink had a thick layer of water at the top.

“Shoot. Sorry, yeah, I think I was.” I pushed up in my chair to shake the cobwebs out of my brain. “Wild weekend.”

Jake sat down and shot me a smile I think he might have invented just for me. There was never any disappointment in that shy half-moon of perfect white teeth and lips. It had begun to appear on his face long before he’d even had those incisors that were evident now, when what his mouth revealed had been like the tiny white Chiclets in gimme-sized boxes of gum people handed out on Halloween.

“Santa Barbara. Up in the hills, nice place. You’d have liked it. We went to a place for brunch yesterday that was out of this world.”

I shrugged. “Some guy I met at Sandpiper. Stunning course. Really beautiful, first-rate golf. I want to go back sometime. Want to come?”

“You mock now. Someday the golf bug will get you.”

“Hardly. Golf has to be the most effete, boring fucking game… Bunch of guys hunting for a little white ball. Oh, woe is me. The ball is in the sand. Call me when that sand explodes.”

“Do you actually
want
the sand to explode?”

He frowned. “No. But there has to be a happy medium between almost getting killed and I’m going to drive this little cart off a cliff just to make something happen. Anyway, how are you golfing with that?” He indicated my hand.

Yeah. My hand was still in a brace, still showing the effects of a brutal crush injury and several surgeries. The bones of my wrist were barely mended, the radius and ulna held together with titanium strips and pins and screws.

My bionic arm
. Except—unlike Steve Austin’s—it was weak and pale and scarred and useless.

“I can’t hit the long-range balls because my grip is fucked-up, but I can still putt. I found someone who”—heaven help me, the memory of the three days I’d spent with Julio made me blush and shift in my seat like an adolescent boy—“likes to drive.”

“You went and just picked some guy up? Again?” Jake didn’t want me to think he was on board with me fucking around. To be fair, he probably wasn’t done reeling from the revelation that I was gay. I kicked his foot with mine, looking down at our hairy ankles. We wore nearly identical leather boat shoes; our legs were tanned.

What is it about living in a beach town that makes a guy go without socks? Before I’d come to St. Nacho’s, I could count on the fingers of one hand the number of times I had worn shoes without socks. Each time there’d been a reason, like I had fallen into a pool, or I was on a Caribbean island vacation.

This…this new boat-shoe-and-no-sock thing was just me not bothering anymore.

“So how’d you meet this…driver?”

“Oh, that’s a funny story, actually. I met him at Nordstrom’s. I had to go shopping. BreeAnna, the little woman, finally sent my clothes.”

Originally my housekeeper was supposed to pack up what little I was taking away from my twelve-year marriage to BreeAnna. I’d been buying things—like a pair of jeans or a pack of tightie whities at a time, as needed, thinking my clothes would arrive any day. But Bree fired the housekeeper when she realized I cared about the woman, and there followed negotiations through lawyers and a great deal of obfuscation. I’d waited for most of my clothes for four long months.

“It didn’t go quite as well as I expected.”

“She ran everything I owned through an industrial shredder first.”

“What the hell?” He motioned the waiter over and asked for a beer. I indicated I wanted another Mary.

“Well. I may be exaggerating a little, but nothing was wearable. She shredded my business clothes, poured paint on my casual stuff. Cut the toes off my socks and drew targets on my underwear. You have to admire her determination. If we’d put half that effort into the marriage it might have worked out.”

“You know that’s not true. You tried.”

Jake always believed the best of me. He
needed
to believe I’d treated BreeAnna with compassion and caring—to see me as basically good. But I’d picked a fragile girl and married her, knowing ahead of time that I could never, ever love her like she deserved to be loved.

Jake saw me as a man who did what was right and suffered for it. Except that’s not who I was, and I didn’t have the stones to tell him.

“I deserve nothing but contempt from her, and we both know it. I’ll buy a new wardrobe for each of us if that’s what it takes to get through this.” I reached for my cigarettes and lit one up. I couldn’t help it any more than I could help avoiding the sadness I knew I’d find in his eyes.

Smoke screen in the truest sense of the word.

The waiter brought our drinks and set them down on cocktail napkins. Afterward, he took my empties and replaced my ashtray with a clean one.

“You’re welcome.” He winked before he left, and I wondered if he was one of the many, many young men I’d danced with here at Nacho’s when I first got to town. He might even be someone I’d taken back to the hotel Jake and I had lived in until we found our place. Fuck if I knew. I was newly single and ready to belly up to the Y chromosome buffet at that point, and my hunger apparently hadn’t abated just yet, or I wouldn’t have noticed how those tight black pants highlighted our waiter’s fine, firm ass.

“Guilty as charged. And it’s working for me.”

Jake relaxed back into his chair with his beer. “I knew you’d cut a swath through all the gay men in this place, but I thought that arm would slow you down a little.”

I lifted my hand and looked at it. My fingers had been crushed and bore the alarming tracery of thin white scars. My wrist and arm were thin and pale, obviously cut open and closed over a number of surgeries. There had been skin grafts. I knew he didn’t mean it that way but it was a source of irritation to me—that wretched, noticeable imperfection. I’m hardly perfect but I’d traded on the gift of above average—some people had called them extraordinary—good looks and wads of cash for a long time.

“It’s not so bad. It’s a miracle they saved it. For a few days after the accident I thought I’d become some kind of campfire story, the guy with the claw for a hand who—”

21st Century Science Fiction by D B Hartwell
Gull Island by Grace Thompson
The Scar by Sergey Dyachenko, Marina Dyachenko
The Lie by Helen Dunmore
Guilt by G. H. Ephron
The Lady in the Lake by Raymond Chandler
Until Then (Cornerstone Book 2) by Noorman, Krista
Werecat Avenue by Anjela Renee
Quest For Earth by S E Gilchrist
Magestorm: The Awakening by Chris Fornwalt
Our partner