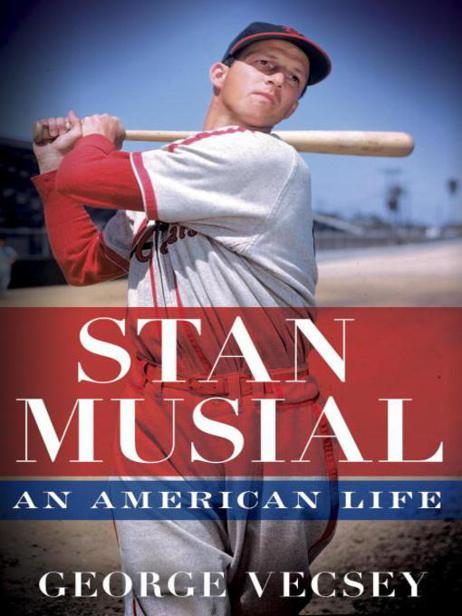 Get to the Heart (by Barbara Mandrell)
A Year in the Sun
Martina (by Martina Navratilova)
Sweet Dreams (with Leonore Fleischer)
Kentucky: A Celebration of American Life (with Jacques Lowe)
Getting Off the Ground: The Pioneers of Aviation Speak for Themselves

Coal Miner’s Daughter (by Loretta Lynn)
One Sunset a Week: The Story of a Coal Miner
The Way It Was: Great Sports Events from the Past (Editor)
Joy in Mudville: Being a Complete Account of the Unparalleled History
of the New York Mets
Naked Came the Stranger (1/25th authorship) (Lyle Stuart, 1969)
Stan Musial: An American Life

TO THE MUSIAL FAMILY
WITH ADMIRATION

1
The Do-Over
2
Lucky Stanley
3
The Old Master
4
Stanley Hits
5
The Stance
6
A Hand on the Shoulder
7
Lukasz and Mary
8
Invitation to Lunch
9
How Donora Got Its Name
10
Mentors
11
Lil
12
Takeoff
13
Pennant Race
14
Meet Me at the Fair
15
The Mahatma of the Midwest
16
Old Navy Buddies
17
The War
18
Checks All Over the Bed
19
Jubilee
20
A Visitor on the Train
21
Best Series Ever
22
Boat-Rocker
23
Stanley the Scout
24
The Strike That Never Happened
25
Stanley and the Kid
26
The Big Three
27
Bad Air
28
Family Life
29
Day Off in Chicago
30
Prime Time
31
Stanley Gives an Interview
Photo Insert
32
Temper, Temper
33
And Some Bad Times
34
On the Hustings
35
Better Pants
36
When the Times Changed
37
Old Folks
38
Fender Bender
39
Retirement
40
Stanley Runs the Team
41
Hometown
42
Stanley Goes to a Reunion
43
The Polish Connection
44
The Face in the Crowd
45
Stanley’s Statues
46
More Funerals
47
Upstaged Again

W
E DROVE
straight through the night, married only a few months, on spring break, our first vacation together. Like Bonnie and Clyde, we had the feeling of putting something over on everybody. Every mile we traveled south of Baltimore was the farthest I had ever been from New York. We were twenty-one.

We arrived in St. Petersburg just after dawn on a Sunday, nothing much moving but the pelicans down by the bay. It was much too early to locate our friends, so we had a few hours to kill.

I happened to find the ballpark.

I had known about Al Lang Field since I was young, hearing Mel Allen describe DiMaggio and Henrich taking their first rips of the spring, the waves, and the sailboats on Tampa Bay.

The Yankees shared this homey little ballpark with the Cardinals, a team I had followed since I was seven years old, back in 1946. It was a wonderful year for the game, even though the Cardinals beat our beloved Brooklyn Dodgers in a playoff.

As that epic World Series began, my father, who worked at the Associated Press, brought home a full set of photographs—“glossies,” they called them—of all the players: one head shot and one posed action shot of all thirty Cardinals and Red Sox. (The rosters were expanded that year to make room for the veterans—the rusty, the wounded, and the aged.)

Mesmerized by the glossies, I would make lineups out of them, scrutinize the faces of the hard-boiled players who had known war and the Depression and the struggle to get to the major leagues.

I can remember the studious glint of Boston’s Dominic DiMaggio, who wore glasses, and the exuberance of the Cardinals’ Joe Garagiola, who already had a reputation as a clubhouse character. But the player I liked best was Stan Musial, the lithe slugger of the Cardinals, just back from the war, who always seemed to be smiling as he went about his business of smiting terror in Brooklyn. Stan the Man, as we had named him, seemed to represent all the daily goodness of his sport—the workaday regularity, the possibilities, the joy.

Now, fourteen years later, I was a young sportswriter who had covered a few Yankee games, Casey and Mantle, the year before. I was old enough to be married, to be parked outside Al Lang Field, noticing a few cars arriving, men disappearing through the clubhouse door, with the quiet diligence of Depression-era workers grateful to be punching the time clock for another paycheck.

From the rearview mirror, I spotted two men strolling down the sidewalk, each carrying a bat. Why, it was Stan Musial and Red Schoendienst, old friends reunited after Schoendienst’s four-year exile in New York and Milwaukee. They seemed as comfortable as matching salt and pepper shakers, wearing nice slacks and collared shirts, most likely just having come from church.

They walked past my car, not noticing the grimy clunker with New York plates that had gotten us out of the frozen North. Up close, I spotted Schoendienst’s freckled catlike features and Musial’s vaguely lopsided smile, straight off the glossies I had studied years earlier. They were strolling to another March Sunday at the ballpark.

My pretty, young wife professed not to mind when I woke her up to point out the two ballplayers.
Look
, I babbled,
it’s Stan and Red
. I tried to explain about Musial’s coiled batting stance, how he could run, how we had loved him in Brooklyn, how he was the most beloved man in his sport. She humored me. We had driven through the night and had found the heart of baseball.

B
UD SELIG
could see it coming. He did not know exactly which great player was going to be overlooked by the capricious impulses of baseball fans, but he was certain it was going to be somebody he loved.

The commissioner had brought this agony on himself by approving a commercial gimmick he suspected might backfire. A credit card company, a major sponsor, would arrange for fans to select the top twenty-five players of the twentieth century, using computerized punch cards. The winners would be announced during the World Series of 1999.

The drawback, and Selig knew it right away, was that this election could produce an injustice for some great players who had concluded their careers before the current generation of fans, before cable television began displaying endless loops of home runs by sluggers who were mysteriously growing burlier by the hour.

In addition to being the commissioner, with all the crass business decisions that post entails, Selig is a legitimate fan who grew up in Milwaukee, whose mother took him to Chicago and New York, giving him a lifelong appreciation for the game.

Knowing, just knowing, that some great players would be left out by mathematical inevitability, Selig did the prudent, fretting, consensual, quintessential Bud Selig thing: he arranged for an oversight committee that would add five players, making it a top-thirty team. He just knew.

Selig’s premonition came true when voting closed on September 10, 1999. Pete Rose, who had been banned from baseball after blatantly denying
he had gambled on games, was among the top nine outfielders on the all-century team; Stan Musial, with his perfect image, who ranked among the top ten hitters who ever played, was mired at eleventh. Stan the Man, an also-ran.

“
Ughhhh,” Selig groaned, a decade later, from deep in his innards. “How could they vote Pete Rose on that team before the great Stan Musial? You look at Musial’s stats, oh, oh, I can’t emphasize enough to you my regard for him, not only as a player, but when I got to know him in later years, when he came to Cooperstown. I can’t begin to tell you what a wonderful human being he is.”

His voice rising to an aggrieved squeal, Selig continued: “Did he deserve to be there? Are you kidding me? That to me was the biggest shock of the whole thing. I felt an incredible sadness. I said, ‘This is impossible.’

“I love Stan Musial,” Selig added. “He was just awesome. I watched him eleven, twelve times a year. I saw him in Ebbets Field, where they called him Stan the Man, because that’s what he was.”

“I’m seventy-four years old and I still say, in a kidlike way, wow!” Selig said, gaining steam. “And if you were trying to win a game in the eighth or ninth inning, you didn’t want to see him up. In old Sportsman’s Park, with that screen, he would pepper it. He was the man in every way.”