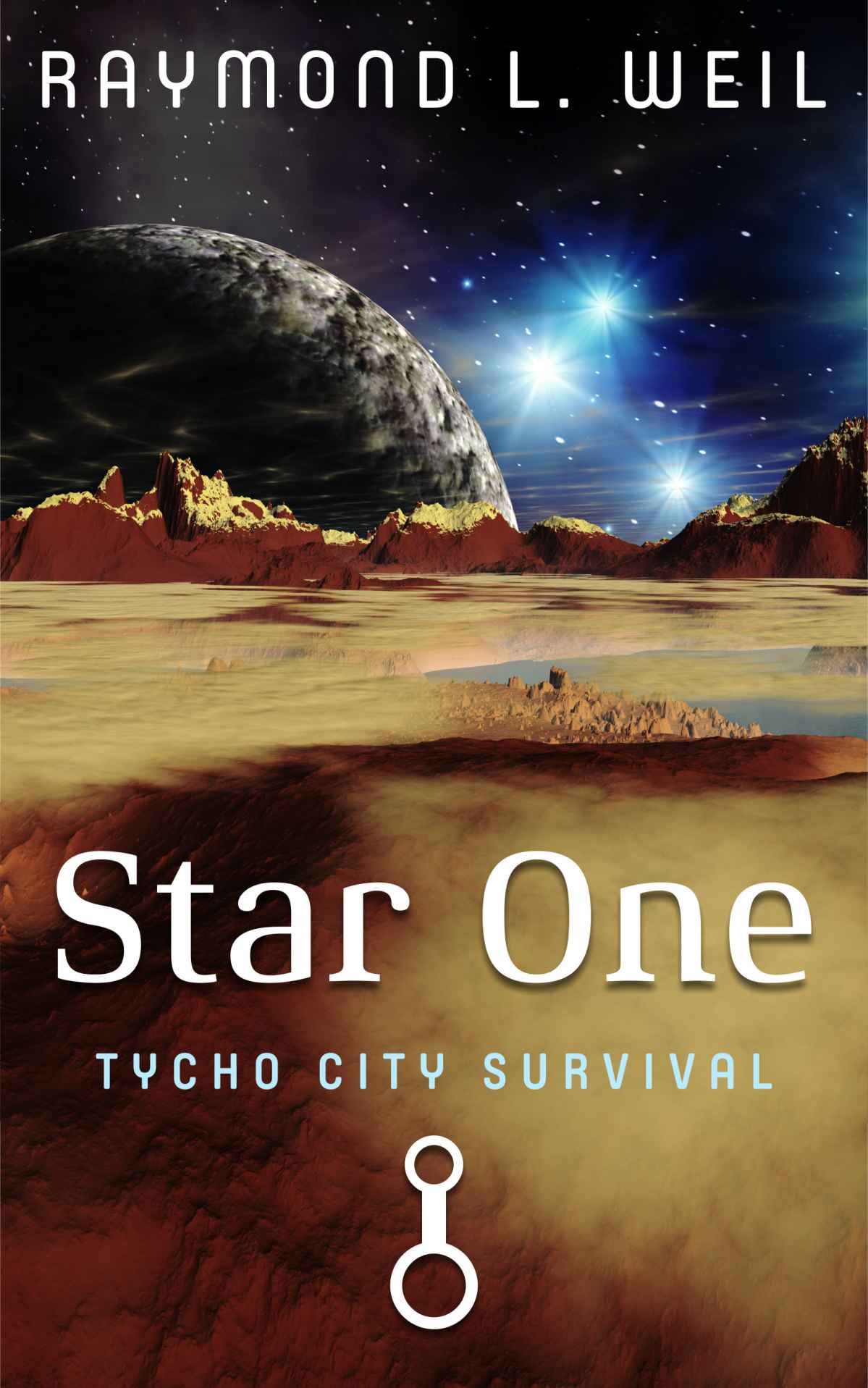 Books in the Star One Series

This
book is a work of fiction. Names, characters, places, and incidents are either
products of the author’s imagination or used fictitiously. Any resemblance to
actual events, locales or persons, living or dead, is purely coincidental. All
rights reserved. No part of this publication can be reproduced or transmitted
in any form or by any means, without permission in writing from the author.

Star One: Tycho City Survival contains an expanded version of Tycho City Discovery and then continues
on into Survival. This is a stand-alone story.

Deep
in the darkness of space a small, indiscreet dust cloud hides a dangerous
secret. For years, the dust cloud has protected its secret from the
unsuspecting solar system from which it is slowly receding. Due to the small
size of the dust cloud and its distance from the star system, the dust cloud
has never been detected. Shortly, the secret it has hidden for years will make
its deadly presence known. For that secret has come to kill a solar system. Unfortunately,
it is the system that contains the planet Earth!

For several years,
the construction workers had labored in the harsh, unforgiving environment of
the Moon. Large sections on the dark side had been leveled, and a massive
construction project had been implemented. Huge dish antennas came slowly into
existence, which when completed would be able to peer deep into the outer reaches
of the known universe.

A total of thirty-two
large, ninety-foot dish antennas dotted the desolate lunar landscape, with only
the pale light from the stars illuminating the towering constructs. Construction
workers and technicians carefully checked over every last detail, for the large
dish array system was almost complete.

The largest
reflector telescope ever built on the Moon, the Albertson reflector with its
twelve-meter mirror was already in place and being tested. It would be able to
photograph the universe like no telescope ever built before. It was capable of
looking back to the first galaxies created and the big bang itself. The
universe was about to become a much smaller place.

From his position
in a small lunar shuttle, Professor Pierre LaRann gazed down appreciatively at
the work going on below him. It had been his lifelong dream to see this project
finally come to fruition. He had overseen every last detail and spent many long
hours out at the construction sites, watching the workers and personally
directing the installation of the dish antennas.

Seeing
everything below him and knowing it was almost complete made the many long
years of hard work seem worthwhile. He had lived a solitary existence
dedicating his life to this project. He had friends, but no close ones. His few
distant family members all lived on Earth, and he hadn’t seen or spoken to any
of them in years. He had dedicated himself to his career and wouldn’t have it
any other way. Sometimes he regretted not having close personal relationships,
but then he would find himself immersed in some astronomy project and those
lonely thoughts would fade away.

“From the construction
engineer’s reports the dish array system should be online early next week,”
Commander Mase Colton commented as he looked out the cockpit window.

He ran his
left hand through his thick blond hair as he gazed at the lunar landscape below
him. It was hard to believe all the work that had been done to build the new
telescope and the array system. He felt excitement inside at realizing how
close the project was to being completed. Already, numerous scientists from
Earth were requesting permission to come up to Farside to work and study at the
array. This would help to refocus attention on the Moon with the scientific
discoveries that the astronomy complex would bring.

Mase knew he
could pick the best and brightest from Earth to help with the massive astronomy
project. One of the first things he intended to do was consult with LaRann and
several of his top people about who might be the best choices. They would be
more familiar with which people would be the best fit for the project. Mase was
very particular who he allowed on the Moon and, in this instance, would trust
their judgment.

The small
lunar shuttle was hovering just above the construction site. They were high
enough to ensure that no damage could be caused by the small rocket engines. The
shuttle was capable of carrying four passengers and a small amount of cargo. Commander
Colton liked to use the small, versatile shuttles for inspection tours like the
one today. Fuel wasn’t an issue in the light gravity of the Moon, and the trip
from Tycho City to the Farside array only took two quick hours.

“Shortly, the
tests and calibrations will begin,” said Professor LaRann with growing excitement
in his eyes. The 48-year-old astrophysicist had overseen the project from its
very beginning. He was extremely pleased that it was almost complete. “We will
begin by scanning for pulsars. They should be easy to spot, and by scanning
some of the known pulsars, we should be able to fine-tune the array very
quickly. Then we can get down to some serious astronomy.”

“I can tell
you can’t wait to begin,” Mase commented with a friendly smile. He had worked
with LaRann for so long that he considered him to be a friend.

“I’m just glad
it’s about ready,” Pierre spoke with a pleased glint in his eyes. “There were
times when I didn’t know if it ever would be.”

Mase nodded in
understanding as he continued to gaze out the cockpit window. He had felt the
same when Tycho City was being built. Even from their height of a few thousand
feet, Mase could see construction workers clad in bulky white spacesuits moving
slowly around the site. Due to the Moon’s light gravity, their movements seemed
slow and awkward.

The
construction site spread out across nearly thirty miles of the lunar surface. Moon
Buggies moved slowly along the numerous small roads that linked the dish
antennas carrying technicians and construction personnel to different
assignments. Off to one side of the array, a massive white dome stood amongst a
grouping of other buildings. The dome contained the Albertson reflector.

“How far along
are the tests on the reflector?” asked Mase, glancing over at LaRann. It had
been a few days since his last inspection tour. He was anxious to see the large
telescope and what progress had been made.

“We’ve made
some preliminary observations of a number of nebula and galaxy clusters,”
replied LaRann, peering out the cockpit window toward the dome. LaRann wore a
pair of glasses and his hair was slightly gray at the temples. “Everything
seems to be working extremely well. Some of the preliminary photographs are
outstanding. With the array and the Albertson reflector, we’re about to take
astronomy into the next century.”

“I’m glad it’s
nearly done,” Mase commented with a broad smile. “You’ve put in a lot of hours
and should be proud of what’s been accomplished here.”

“I’ve had a
lot of top notch people to assist me,” replied LaRann, nodding his head. “Adam,
LeAnn, Charles, and Andrew have been a huge help. This couldn’t have been done
without them.”

“They’re good
people,” Mase spoke in agreement. His eyes returned to the dish arrays that
spread across the surface of the Moon below them.

He knew that a
lot of money had been invested in the project. Fortunately, due to the light
gravity on the Moon, the dish antennas were constructed of a lighter material
than what was used on similar ones on Earth.

Many of the parts
had been built in Tycho City and then transported to the construction site.
This had helped to hold down the costs, but a number of influential people on
Earth were still unhappy about the billions of dollars being spent on the array
and the telescope. Senator Farley of Michigan had made it extremely plain that
he felt both projects were a waste of time and taxpayer’s money.

“Land us at
the observatory complex,” Mase instructed Anthony Kleese, who was the shuttle pilot
and also a close friend. “I want to inspect the dome and facilities while I’m here.”

“Sure thing,”
Anthony replied. He used his controls to make a gentle turn, aligning the
shuttle with Farside’s landing pads.

“I’m sure you
will find everything is in order,” Pierre spoke as the shuttle began slowly to
descend toward the dome and one of the landing pads at the small landing
facility.

“I’m sure I
will,” Mase replied with a patient look on his face. He knew that Pierre felt the complex was his personal baby and was extremely defensive if anyone
criticized it. “It’s been just a few days since I was here, and I would like to
see the reflector up close.”

The shuttle
dropped smoothly down toward the landing pad. Anthony’s hands delicately adjusted
the controls as he brought the shuttle to a hover just above the pad before
gently lowering it in a textbook landing. Anthony had performed this maneuver hundreds
of times over the last few years, and it was almost second nature now. He was
also the best shuttle pilot on the Moon.

Mase waited patiently
as a docking port was extended and until the airlock showed a smooth seal with
a breathable atmosphere on the other side. Pressing the control panel next to
the door, it opened, and Mase and Pierre walked down the short corridor and
down into the underground section of the complex. Anthony stayed behind to get
the shuttle prepped for its return flight.

The Farside
complex currently housed nearly 200 technicians and construction workers as
well as the research staff who were assigned to the facility. While some of the
buildings were on the surface, the majority of the complex was buried deep
underground. This was a precaution against meteor strikes as well as potential
pressure leaks in case any part of the structure failed.

It took just a
few minutes to walk through the short connecting tunnel and the underground
section of the complex to the towering dome that contained the Albertson reflector.
Passing through another small airlock, they stepped inside.

Mase took a
moment to look around, taking notice of the numerous technicians and other
people that were busy working. The large Albertson reflector telescope filled
the central portion of the room and, looking upward, Mase could see where a
special seal around the reflector protected the interior of the dome from
losing atmosphere.

The entire
dome could be rotated to allow the reflector to scan a significant portion of
space. The low hum of working equipment and computers was barely audible along
with the muted conversations of the technicians who were busy at their
stations.

“Commander
Colton, Professor LaRann, I see you have come to check on our new toy,” LeAnn
Kelly the 32-year-old astrophysicist said, walking up to the two with a
friendly smile.

She was
currently working on studying deep space objects, such as distant galaxy
clusters, to determine the exact age of the universe and its current rate of
expansion. LeAnn was an up and coming scientist with a bright future.

Brushing her
shoulder length black hair back with her left hand, she gestured toward the telescope.
“This telescope is fantastic! We’ve already started mapping some distant galaxy
clusters out near the edge of the known universe.”

The Mutant Prime by Haber, Karen
Ramona Forever by Beverly Cleary
Todo se derrumba by Chinua Achebe
Shockingly Seductive (Addicted To You, Book Seven) by Covington, Lucy
Whiteout by Ken Follett
And Then Things Fall Apart by Arlaina Tibensky
The Ghost Riders of Ordebec (Commissaire Adamsberg) by Fred Vargas
Murder at the Powderhorn Ranch by Jessica Fletcher
The Glass Butterfly by Louise Marley
Bring me to life (The golden collection) by Carr, Kam
Our partner