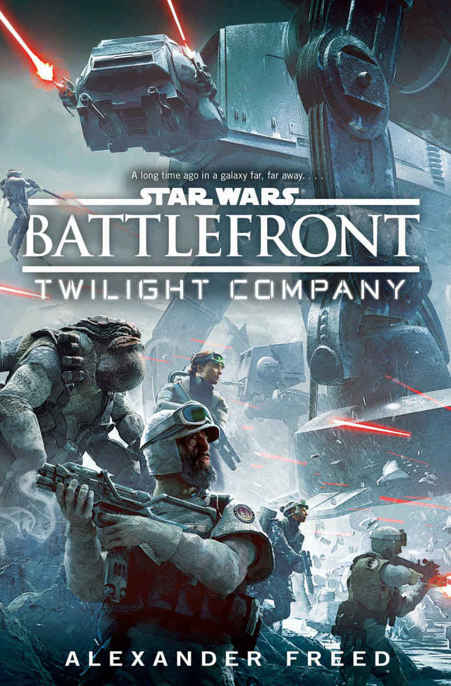 Among the stars and across the vast expanses of space, the Galactic Civil War rages. On the battlefields of multiple worlds in the Mid Rim, legions of ruthless Stormtroopers – bent on crushing resistance to the Empire wherever it arises – are waging close and brutal combat against an armada of freedom fighters. In the streets and alleys of ravaged cities, the front-line forces of the Rebel Army are taking the fight to the enemy, pushing deeper into Imperial territory and grappling with the savage flesh-and-blood realities of war on the ground.

Leading the charge are the soldiers – men and women, human and non-human – of the Sixty-First Mobile Infantry, better known as Twilight Company. Hard-bitten, war-weary, and ferociously loyal to one another, the members of this renegade outfit doggedly survive where others perish, and defiance is their most powerful weapon against the deadliest odds. When orders come down for the rebels to fall back in the face of superior opposition numbers and firepower, Twilight reluctantly complies. Then an unlikely ally radically changes the strategic equation – and gives the Alliance’s hardest-fighting warriors a crucial chance to turn retreat into resurgence.

Orders or not, alone and outgunned but unbowed, Twilight Company locks, loads, and prepares to make its boldest manoeuvre – trading down-and-dirty battle in the trenches for a game-changing strike at the ultimate target: the very heart of the Empire’s military machine.

Alexander Freed
is the author of
Star Wars: the Old Republic: The Lost Suns
, as well as many short stories, comic books, and videogames. Born near Philadephia, he endeavours to bring the city’s dour charm with him to his current home of Austin, Texas.

To Susan, who earned it

Books are written alone, but they rarely make it to publication that way.

Thanks first of all to Shelly Shapiro and Frank Parisi, who took a chance on me with this project (though Frank was wise enough to run for cover after tossing the grenade)—working with such thoughtful and adept editors is both humbling and a privilege.

Thanks also to Charles Boyd, Dana Kurtin, and Jeffrey Visgaitis, who provided valuable feedback during the writing process and helped forestall the worst of my nonsense. Due credit as well to all the writers from BioWare Austin who dragged me into the
Star Wars
galaxy in the first place; in particular, Daniel Erickson has been a tremendous backer and mentor over the years, and Drew Karpyshyn’s support has been much appreciated.

Finally, while I could list a dozen and more authors whose work influenced
Twilight Company
, a special tip of the hat must go to the grandfather of space opera E. E. “Doc” Smith, without whom none of this would be possible. Clear ether, spacehound!

A long time ago in a galaxy far, far away….

The Galactic Empire endures. Despite the destruction of its terrifying Death Star by the Rebel Alliance, its oppression spreads undiminished across the stars.

Under the direction of the Emperor and Darth Vader, an army of highly trained, single-minded stormtroopers quashes dissent and destroys resistance.

But on worlds like Sullust, Coyerti, Haidoral Prime, and untold others, rebel forces fight in the trenches, determined to maintain hope against the unrelenting Imperial war machine …

Day Forty-Seven of the Malkhani Insurrections

Thirteen Years After the Clone Wars

His name was Donin, and though that wasn’t the name he’d been born with, he had the ink-rubbed brands to prove it. The black whorls and waves, freshly applied by the clan masters in honor of his induction, ran across his dusky shoulder blades under his coarse cloth jacket. They were one of four gifts he’d received upon joining the army of the Warlord Malkhan: a new name, the brands, a serrated knife, and an offworlder’s particle blaster.

The masters had assured him that of the four gifts, the blaster was the most precious. Its grip was wrapped in fraying leather and its barrel was scored and crusted with ash. It had enough power left to fire a dozen searing bolts, and Donin had been warned not to waste a single shot or drop it if it began to burn his palms. Those were the acts of a child—not a full member of the clan.

He knelt among his new brothers and sisters—he’d yet to learn their names—behind a low stone wall that stretched across the hilltop. His slight frame, thin from youth and hunger, allowed him to conceal himself fully behind the barricade; for this reason he had been assigned to the front. Like his brands and weapons, that assignment was a privilege. He reminded himself as much when he began to sweat and tremble.

He glanced sidelong at his companions and looked for signs that they, too, were afraid of the coming battle. They were nearly all larger and older, carrying offworld weapons that appeared as scored and rusted as his own. They cleaned their knives and murmured to one another. Donin told himself he would die for them as they would die for him, in the name of the clan and its warlord. And if they won the day—

If
I
survive the battle
, Donin corrected himself. Victory was inevitable for the Warlord Malkhan. Only Donin’s own fate was in question.

—then they would celebrate. He’d heard stories of feasts, of troughs of clear water and skewers of bantha meat, of salts and sauces from other continents, other
planets.
He would gorge himself, he thought, and sleep in safety in the warlord’s camp. He’d heard the clan’s celebrations before, while hiding shivering in his father’s home, and those joyful cries were what had finally lured him to the masters.

His father had said the Malkhanis were no different than any other faction on Crucival, but his father was wrong. No one else had such food or took so much joy in victory. No one else was as strong as Malkhan, or had the wisdom to procure such a trove of offworld technology. Donin’s new clan would build a better planet.

Something far away howled in the dusty air, starting soft and rising rapidly. Donin squared his shoulders, half stood from his crouch, and thrust his blaster over the wall in one movement, as he’d been taught. He saw no target. A man’s voice laughed behind him, and a broad palm cupped his dark hair and tilted his head back.

“Battle ain’t started yet, boy. Just a ship headed to the tower. Get us all killed if you shoot.”

His gaze redirected, Donin saw the sphere and crossbars of an off-world flier silhouetted against the clouds. It roared in the direction of the steel spire and faded from view.

Donin lowered himself to his knees again, and the hand on his head disappeared. He’d made a fool of himself. He silently pledged not to do it again. “We didn’t see them much in the Gulches,” he murmured—an explanation, not an excuse.

The man behind him grunted. “You’ll see them a lot here. I’m serious about not shooting. Don’t go within a stone’s throw of the tower, either, no matter what happens. The offworlders in white may not come out much, but you bother them even a little …”

“I know,” Donin snapped. He swiveled and looked up at the man, who could have been four times Donin’s age, with milky eyes and pitted skin. Older than the warlord himself. But that didn’t mean he’d been part of the clan any longer than Donin. “I know all about them. Their soldiers are clones. They make them in
batches.
”

The man grunted again, showing cracked yellow teeth in something that might have been a smile. “You don’t say? Who told you that?”

Let Me Finish by Roger Angell
Dark Challenge by Christine Feehan
The Pack Rules 3: Ruled by the Alpha (Werewolf Romance Serial) by Michele Bardsley
PackRescue by Gwen Campbell
On Becoming His - Lessons Learned by Dayne, Cassandre
Lizabeth's Story by Thomas Kinkade
Death Becomes Me (Call Me Grim Book 2) by Elizabeth Holloway
The Secret Rose by Laura Parker
The Birthday Ball by Lois Lowry
Crushed by Amity Hope
Our partner