Read Stars in My Pocket Like Grains of Sand Online 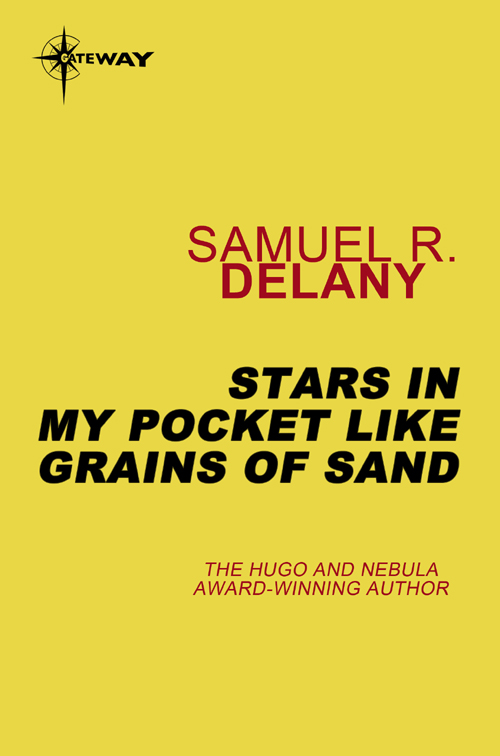 Chapter 2. The Flower and the Web

Chapter 7. Home and a Stranger

Chapter 9. From Breakfast to Morning

Chapter 11. A Tale of Two Suppers

Stars in My Pocket like Grains of Sand
is the first novel in an SF diptych. The second novel in the diptych is
The Splendor and Misery of Bodies, of Cities
.

‘Of course,’ they told him in all honesty, ‘you will be a slave.’

His big-pored forehead wrinkled, his heavy lips opened (the flesh around his green, green eyes stayed exactly the same), the ideogram of incomprehension among whose radicals you could read ignorance’s determinant past, information’s present impossibility, speculation’s denied future.

‘But you will be happy,’ the man in the wire-filament mask went on from the well in the circle desk. ‘Certainly you will be happier than you are.’ The features moved behind pink and green plastic lozenges a-shake on shaking wires. ‘I mean, look at you, boy. You’re ugly as mud and tall enough to scare children in the street. The prenatal brain damage, small as it is, we still can’t correct. You’ve been in trouble of one sort or another for as long as there are records on you: orphanages, foster homes, youth rehabilitation camps, adult detention units – and
you
haven’t gotten along in any of them. Sexually …?’ Lozenge tinkled against lozenge: the man’s head shook. ‘In this part of the world your preferences in that area can’t have done you any good. You’re a burden to yourself, to your city, to your geosector.’ Lozenges lowered, just a bit: the man moved forward in his seat. ‘But we can change all that.’

He pushed back in the sling that was uncomfortable and costly. A blank and intricate absence on his face, he raised one big-knuckled hand to point with a finger thick as a broom-handle – for the technology of that world still
made lathes, lasers, bombs, and brooms: the nail was gnawed almost off it, as were the nails on his other fingers and thumbs. Crowding his wide palms’ edge, whether flailing before him or loose in his lap, those fingers seemed not only too rough and too heavy for any gentle gesture, but also – though, if you counted, there were only ten – too many. The finger (not the fore- but the middle) jabbed brutally, futilely. ‘You can change me?’ The voice in his nineteen-year-old throat was harsh as some fifty-year-old derelict’s. ‘You can make me like you? Go on! Make me so I can understand things and numbers and reading and stuff!’ As brutally, the fingers came back against the horse-boned jaw: a mutated herpes virus, along with some sex-linked genetic anomaly, had, until three years ago when the proper phage was developed, rendered the ordinary adolescent acne of the urban males in that world’s lower latitudes a red, pitted disaster. ‘All right, change me! Make me like you!’

Either side of a plastic diamond, the mouth’s corners rose. ‘We could.’ The plastic swung with breath. ‘But if we did, then you wouldn’t really
be
you any more, now would you?’ From the black ceiling, through the orrery of masking bits, a hanging lamp dappled the man’s naked arms. ‘We’re going to make a change in your mind – a change in your brain – a very small change, a change much smaller than the one you just asked for. We’re going to take that little knot of anger you just waved at me on the end of your finger, that anger you just threw back at your own face – we’re going to take that knot, and we’re going to untie it. Maybe thirty brain cells will die by the time we’re finished. Maybe six thousand synapses will be shorted open and left that way. Maybe another thousand will be permanently closed. The illegal drugs we know you’ve put in your belly and your lungs and your veins over the past twelve months, not to
mention the past twelve years, have already wreaked more biological havoc among your basic ten billion than we will, by a factor of several hundred thousand. Indeed, a side effect of what we intend to do is that you simply won’t
want
any more drugs. You’ll be happy with who you are and with the tasks the world sets you. And you must admit that, as worlds go, this is a pretty beneficent one.’

He didn’t know what ‘beneficent’ meant. And though he’d heard that there were other worlds, other cities (other than the three in whose slums and institutions he’d grown up), other counties, other geosectors, even other worlds with beings who were just not human, it all struck him as only dubiously credible.

Behind the mask with its plastic shapes a-bob, the man was saying: ‘It’s a decision many men, not to say women, make … Indeed, I read a report last week that said almost three times as many women as men on our world make this decision, though it doesn’t seem my experience. The men – and women – who’ve made the decision we’re asking of you include some fine folks, too: artists, scientists, politicians, well-respected philosophical thinkers. Some very rich and powerful people have decided to abandon their worldly acquisitions and come to the Institute here. They feel, I suppose, we have something to teach them. And though we certainly would never claim such a thing - our method is much too simple – perhaps we do.’

‘I can learn things,’ he suggested hoarsely, pulling back in the sling and looking down; for the tests he’d been given over the years suggested strongly that he couldn’t. And the few times he’d hung around the places that were a confusion of books and tapes and films, they’d asked him to leave, or put him out, saying much what this
masked man was saying now and saying it much more angrily. ‘I could learn if you taught me …’

Deciding it must be a smile, he tried a small smile back – an expression he seldom let hold his long, rough face for any time.

‘As I said, we’re not out to change the fact of who you are. We only want to change that small bit of you grossly unhappy
with
that fact. All right. Do you choose happiness? You have only to say “yes.”’

‘Destroy your will? Oh, we don’t do anything so simple or unsubtle. If you can make fine, fast, and fertile decisions now, you’ll be able to make them afterwards. You simply won’t be inclined to make new
kinds
of decisions, at least without instructions.’

‘Say “yes.” There’s no pain, I assure you – either physical or emotional. After all, what did you come here for?’

‘Say “yes.” We need a voiceprint of the actual word; this is being recorded. Otherwise it isn’t legal.’

Which confused him. ‘“Yes …”? Yeah, but that’s what I –’ and felt something terrible in him pull away or something gigantic in him vanquished; and its departure or defeat was a relief or a release, which, because he had never felt
any
thing before to such an extent, seemed more something that hadn’t, rather than something that had, happened: not an overwhelming occurrence to him
so much as a total surround revealed – or removed. He asked, because the question had been struggling with the back of his tongue and came out through momentum rather than desire: ‘When you gonna do it?’

‘We just did.’ (He really didn’t want to know …) ‘You, of course –’ The man laughed – ‘expected lightning to whip down from electrodes in the ceiling and crackle about your beleaguered skull – really, we
must
do something with that ringworm! I mean, on a young man
your
age? Actually, we use midrange gamma-ray lasers … but you wouldn’t understand. Put your thumbprint here.’ From beneath the desk the man took out a yellow cube, extended it.

He reached forward to press the great sausage of his thumb on the transparent face.

‘There. That gives the RAT Institute licence to sell you to a labour project that, in our estimation, will be both profitable and humane. Let’s see …’ The man’s other hand came up to scatter more cubes, clicking, across the desk. Lozenges dipped to study the inscribed marks: turquoise, orange, lavender. ‘You had a vasectomy in the orphanage back when you were –’ he turned one to another face – ‘thirteen … apparently a reversible one, should you or anyone else want to bother. Well, though you’re not likely to initiate anything in that department now, it’s astonishing how many people still try to use slaves for sex. And we haven’t done anything that’ll stop you from responding – if your accustomed stimuli are applied. But that’s no longer our concern.’ Lozenges lifted. Those over the eyes (purple left and green right) were transparent enough to see through to blinking lids. ‘You’re as happy now as you can be, aren’t you?’ (The silence welling in him obliterated any need to deny; and, anyway, he had never been much for denying what was told him with sufficient authority.) ‘But I don’t have to
say that to you. You know it. If you’ll just go through there …?’

On the arched door were the three hieroglyphs:
Radical Anxiety Termination
. In his search for the Institute, he had finally come to recognize them, though he still could not really read them, if only because – as a number of people had explained, patiently or impatiently, while he’d been searching – he could pronounce none of the three correctly, even after they’d been repeated to him many, many times.