“I can't do anything but think of it. And see youâevery time I close my eyes, I see you the way you stood there in that hallway, blood on your dress, marks on your skin. Not knowingânot knowing what he'd done to you. And rememberingâhalf remembering some other time when I couldn't stop him.”

“It's over,” she said again, because her legs were turning to water. “Leave it alone.”

“You might have gotten away without me,” he continued. “You took out a guard twice your size. You might have pulled it off without any help from me. You might not have needed me at all. And I realized that was part of my problem all along. Believing, being certain, I needed you so much more than you could possibly need me. Being afraid of that. Stupid to be afraid of that,” he said as he came up the steps again. “Once you understand real fear, the fear of knowing you could lose the most important thing in your life in one single heartbeat, nothing else can touch you.”

He gathered her to him, too desperate to heed her resistance. And, with a shuddering gulp of air, buried his face in her hair. “Don't push me away, don't send me away.”

“This isn't any good.” It hurt to be held by him, yet she wished she could go on being held just like this, with the sun warm on her skin and his face pressed into her hair.

“I need you. I need you,” he repeated, and turned his urgent mouth to hers.

The hammer blow of emotion struck and she buckled. It swirled from one of them to the other in an unbridled storm, left her heart shaken and weak. She closed her eyes, slid her arms around him. Need would be enough, she promised herself. She would make it enough for both of them. There was too much inside her that she ached to give for her to turn him away.

“I won't send you away.” Her hands stroked over his back, soothed the tension. “I'm glad you're here. I want you here.” She drew back, brought his hand to her cheek. “Come inside, Seth. Come to bed.”

His fingers tightened on hers. Then gently lifted her head up. It made him ache to realize she believed there was only that he wanted from her. That he'd let her think it.

Why had he been so resistant to seeing what was in her eyes? he wondered. Why had he re
fused to believe what was so blatantly real, so generously offered to him.

“I came here to beg. The third Star is generosity,” he said, almost to himself. “You didn't make me beg. I didn't come here for sex, Grace. Or for gratitude.”

Confused, she shook her head. “What do you want, Seth? Why did you come?”

He wasn't sure he'd fully realized why until just now. “To hear you tell me what you want. What you need.”

“Peace.” She gestured. “I have that here. Friendship. I have that, too.”

“It's been enough all my life.”

He caught her face in his hands before she could step away. “If you could have more? What do you want, Grace?”

“Wanting what you can't have only makes you unhappy.”

“Tell me.” He kept his eyes focussed on hers. “Straight out, for once. Just say what you want.”

“Family. Children. I want children and a man who loves meâwho wants to make that family with me.” Her lips curved slowly, but the smile didn't reach her eyes. “Surprised I'd want to spoil my figure? Spend a few years of my life changing diapers?”

“No.” He slid his hands down to her shoulders, firming his grip. She was poised to move, he noted. To run. “No, I'm not surprised.”

“Really? Well.” She moved her shoulders as if to shrug off the weight of his touch. “If you're going to stay, let's go inside. I'm thirsty.”

“Grace, I love you.” He watched her smile slide away from her face, felt her body go absolutely still.

“I love you.” Saying it, he realized, was power. True power. “I fell in love with you before I'd seen you. Fell in love with an image, a memory, a wish. I can't be sure which it is, or if it was all of them. I don't know if it was fate, or choice, or luck. But it was so fast, so hard, so deep, I wouldn't let myself believe, and I wouldn't let myself trust. And I turned you away because you let yourself do both. I came here to tell you that.” His hands slid down her arms and clasped hers.

“Grace, I'm asking you to believe in us again, to trust in us again. And to marry me.”

“Youâ” She had to take a step back, had to press a hand to her heart. “You want to marry me.”

“I'm asking you to come back with me today.
I know it's old-fashioned, but I want you to meet my family.”

The pressure in her chest all but burst her heart. “You want me to meet your family.”

“I want them to meet the woman I love, the woman I want to have a life with. The life I've been waiting to startâwaiting for her to start.” He brought her hand to his cheek, held it there while his eyes looked deep into hers. “The woman I want to make children with.”

“Oh.” The weight on her chest released in a flood, poured out of herâ¦until her heart was in her swimming eyes.

“Don't cry.” It seemed he would beg after all. “Grace, please, don't. Don't tell me I left it too late.” Awkwardly he brushed at her tears with his thumbs. “Don't tell me I ruined it.”

“I love you so much.” She closed her fingers around his wrists, watched the emotion leap into his eyes. “I've been so unhappy waiting for you. I was so sure I'd missed you. Again. Somehow.”

“Not this time.” He kept his hands on her face, kissed her gently. “Not ever again.”

“No, not ever again,” she murmured against his lips.

She held him close in the flower-scented morning where the stars slept behind the sky. And felt the last link of an endless chain fall into place.

He kept his eyes shut, his cheek on her hair. And his smile bloomed slow and easy. “Grace.”

“We're where we're supposed to be. Can you feel it?” She drew a deep breath. “All of us are where we belong now.”

She lifted her face, found his mouth waiting. “And now,” he said quietly, “it begins.”

The Stars of Mithra 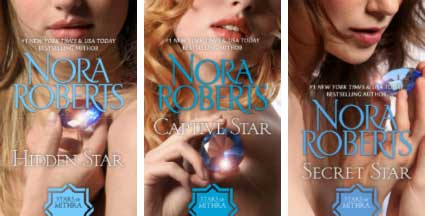 And look for The MacKade Brothers series, also now available in ebook!

The Return of Rafe MacKade

The Pride of Jared MacKade

The Heart of Devin MacKade

The Fall of Shane MacKade 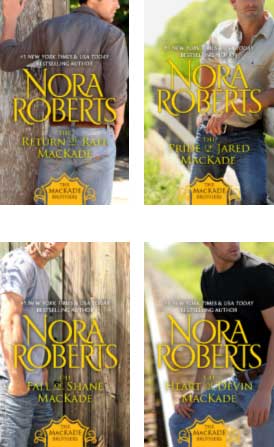 All rights reserved under International and Pan-American Copyright Conventions. By payment of the required fees, you have been granted the non-exclusive, non-transferable right to access and read the text of this e-book on-screen. No part of this text may be reproduced, transmitted, down-loaded, decompiled, reverse engineered, or stored in or introduced into any information storage and retrieval system, in any form or by any means, whether electronic or mechanical, now known or hereinafter invented, without the express written permission of publisher.

Â® and
â ¢
are trademarks of the publisher. Trademarks indicated with Â® are registered in the United States Patent and Trademark Office, the Canadian Trade Marks Office and in other countries.

The publisher acknowledges the copyright holders of the individual works as follows:

Â® and â ¢ are trademarks of the publisher. Trademarks indicated with Â® are registered in the United States Patent and Trademark Office, the Canadian Trade Marks Office and in other countries.

Changing of the Guard by Tom Clancy
Under the Glacier by Halldór Laxness
Blood Debt (Touched Series Book 1) by Straight, Nancy
Gravity's Rainbow by Thomas Pynchon
Mittman, Stephanie by The Courtship
Estúpidos Hombres Blancos by Michael Moore
One Condition (The Lust List: Kaidan Stone #1) by Nova Raines
Time Out of Joint by Philip K. Dick
The King's Ring (The Netherworld Gate Book 2) by Sam Ferguson
When the Doves Disappeared by Sofi Oksanen
Our partner