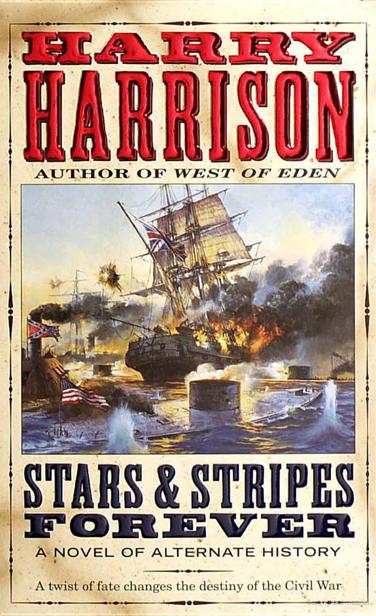 For Nat Sobel—with immense thanks

There is no privileged past... There is an infinitude of Pasts, all equally valid... At each and every instant of Time, however brief you suppose it, the line of events forks like the stem of a tree putting forth twin branches.

AN ULTIMATUM FROM BRITAIN

IRON OF THE NORTH

THE ROAD TO WAR

DEATH IN THE SOUTH

THE WORLD TURNED UPSIDE DOWN

THE TASTE OF VICTORY

WORDS TO CHANGE THE WORLD

TAKING THE WAR TO THE ENEMY

THE BATTLE OF QUEBEC

AN INTERVIEW WITH HARRY HARRISON

There, in the center of London, his statue sits in Imperial Roman splendor, toga-garbed and carved in finest marble. Prince Albert, consort to Queen Victoria, his memory enshrined in what is probably the ugliest monument in the world; the Albert Memorial.

He was a kind man and much loved by the Queen; he brought her true happiness. But did this Saxon prince, who never lost his thick German accent, ever do anything of any importance? Other than father the future king.

He certainly did. He averted war with the United States.

In 1861 the American Civil War was still in its first murderous year. Britain and France, to the dismay of the North, were planning to recognize the South as a separate nation. Now the British steam packet
Trent
was taking the two newly appointed Confederate commissioners, James M. Mason and John Slidell, to England to represent President Jefferson Davis.

On the eighth of November 1861 the
Trent
was stopped at sea by the USS
San Jacinto.
When her commanding officer, Captain Wilkes, found that there were two rebels aboard the
Trent
he had them arrested on the spot and removed from the British ship.

England was aroused, furious. The War of 1812, when Britain had been at war with the newly established United States of America, was still fresh in memory. With the Northern blockade of the Confederate ports biting deep, there was little cotton from the South and the weaving mills of the North were facing bankruptcy. The Prime Minister, Lord Palmerston, saw the boarding of a British ship and the seizing of the passengers as a deliberate insult to Britain's sovereignty. The Foreign Minister, Lord John Russell, echoed the public sentiment when he sent a dispatch to President Lincoln ordering him to release the men immediately—or suffer the consequences. British troops and thousands of rifles were dispatched to Canada and troops massed on the United States border.

Enter the peaceful Prince Albert. Already terminally ill with lung congestion—which was in reality typhoid fever caught from the foul water supply and drains of WindsorCastle—he did a rewrite of the dispatch, ameliorating the language and giving Lincoln a face-saving way out. Queen Victoria approved of the changes and it was sent to Washington.

On December 26 President Lincoln ordered that the two Confederate commissioners be released.

Sadly, Prince Albert would never know that he had averted what very well could have been a tragic confrontation. He had died on the fourteenth of the same month.

But consider for a moment what would have happened if he had not changed the fatal dispatch.

What if Lincoln had been forced by the strong language to ignore the ultimatum?

What if the British invasion of the United States had gone forward?

What if there had been war?

The USS
San Jacinto
rocked gently in the calm seas of the South Atlantic; blue water below, blue sky above. The fire in her boiler was banked and only a trickle of smoke rose up from her high funnel. The Bahama Channel was only fifteen miles wide at this point, near the Parador del Grande lighthouse, a bottleneck through which all the island traffic funneled. Captain Charles D. Wilkes stood on the bridge of the American warship, hands clasped behind his back, staring grimly toward the west.

"Smoke in sight," the lookout stationed in the crow's nest called out. "East southeast."

The captain did not move as Lieutenant Fairfax repeated the sighting. The ship that he was waiting for would be coming from the west—should be coming soon if his calculations were correct. If the reports from the Union spies in Cuba could be believed, the men he was seeking should be on board. The chase so far had been a frustrating one; all about the Caribbean. The wanted men had been one step ahead of him ever since he had sailed from Florida. This would be his last chance to apprehend them. If he were wrong, and the
Trent
did not take this passage between the islands, she would now be safely on her way back to England and the pair would have escaped.

The decision he had made to station his ship here in the Old Bahama Channel was based completely on speculation. If the two men had indeed boarded the
Trent,
and if the steam packet had left Havana as scheduled—and if she took this course to St. Thomas, why then she should be here by noon at the latest. He started to reach for his watch, then stopped, not wanting to reveal eagerness or doubt before the crew. Instead he squinted up at the sun; surely it was close to the meridian. He clasped his hands even tighter behind his back and the scowl deepened on his face.

Five minutes went by—they could have been five hours—before the lookout called out again.

"Raise steam," the captain ordered. He slammed his fist on the rail. "That's the
Trent,
I
know
that is the
Trent.
Have the drums beat to quarters."

Lieutenant Fairfax repeated the commands. In the engine room the boiler doors clanged open and the stokers hurled shovel load after shovel load of coal onto the fire. The deck thudded with the sound of running feet. Fairfax relaxed a little when he saw the slightest of smiles on the captain's lips. Wilkes was a hard man to serve under at any time, gruff and bad-tempered at being passed over so often for command. Sixty-two years old and seemingly doomed to remain forever behind his desk as chairman of the Lighthouse Board. Only the outbreak of war had saved him from that. Dispatched to Fernando Po to bring back this veteran wooden steamer to the Philadelphia Naval Yard, he had violated his orders as soon as they had reached Florida and heard about the search that was going on. He never for an instant considered going to the navy yard, not while two traitors were still at large! He needed no orders to apprehend them—just as he had needed no orders from his superiors in the long-gone days when he explored and mapped the frozen Antarctic wilderness. He had little faith in the official chain of command and was always happier working alone.

The deck vibrated as the screw turned and a small wave foamed at the bow. Fairfax had his glass pointed at the approaching ship, hesitated to speak until he was absolutely sure.

"That is the
Trent,
sir, I know her lines well. And it is just as you said, eleven-forty, just before noon." There was more than a little awe in his voice; Wilkes nodded.

"Our English cousins are good at punctuality, Lieutenant. They are not good at much else." He had been a fourteen-year-old midshipman when the British
Shannon
had half destroyed the first ship he ever sailed in, the
Chesapeake.
Captain Lawrence, mortally wounded by musket fire, had died in his arms. He had never forgotten the dying man's last words—"Don't give up the ship." Yet despite the captain's order the colors had been struck and the ship had surrendered so that he, and the surviving crew members, ended up in a filthy British jail. He had never lost his hatred of the British since then.

"Hoist the flag," he ordered. "As soon as they can see it signal her to stop engines and prepare for boarding."

The helmsman brought the ship about in a smooth turn until they were sailing on a parallel course close to the steam packet.

"A solid shot across her bows should induce her master to take proper action."

Moments later the gun boomed out; the
Trent
had to have seen it but they chose to ignore it.

This gun was loaded with an explosive shell that burst close beside the British packet's bow. As the white cloud of smoke dispersed the bow wave on the
Trent
died away as her engines stopped. Captain Wilkes nodded grim approval.

"Lower the boat, Lieutenant Fairfax. You will take a squad of marines with you, muskets and bayonets. Use them if needs be. You know whom we are looking for."

Wilkes watched in silence as the oars dipped and the boat pulled smartly toward the other ship. He betrayed none of the doubts that racked him. The broken orders, the desperate pursuit, the guesses and decisions, were part of the past. But everything he had done would be worth it if the wanted men were aboard. If they weren't... He preferred not to think of the consequences.

As soon as the boarding ladder was dropped, Fairfax climbed up to the
Trent's
deck. Wilkes could clearly see him talking to an officer there. Then he turned about to face the American warship and took a white kerchief from his sleeve. Moved it in the agreed signal from chin to waist and back again.

Eustin pushed through the cabin door and slammed it behind him.

"What is happening?" Madam Slidell asked. He just shook his head and ran across the cabin to the adjoining chamber, pushed into it.

"It's us—the Yankees are after us!" He stammered as he spoke, face pale with fear.

"Did they mention our names?"

"They did, Sir, said they were after John Slidell and William Murray Mason. Didn't mention me nor Macfarland. But the officer, he did talk some about you gentlemen's assistants so they know that we're aboard."

Slidell did not like this. He rubbed at his big, red nose angrily, stomped the length of the cabin and back. "They just can't do this, stop a British ship at sea, board her—this sort of behavior—it cannot be done."

"Easy to say, John," Mason said. "But as I live and breathe it sure looks like it has been done. Now we must think of the papers we are carrying, our warrants—the letters from Jefferson Davis. All the letters to the English and Scotch shipyards about the privateers they are building for us. Remember that we also have personal letters to the Queen and Louis Napoleon. They must not be taken!"

"Too late for that—there is the good possibility that they would float, be seen. We need a better plan. And I have it." The first fear was gone and Mason was his old and arrogant self again, brushing the back of his hand across his gray, bushy brows in a gesture long familiar to his fellow senators in Washington.

"John, you will stay here with your family and buy us time—a holding action."

Where Mercy Flows by Karen Harter
Three to Tango by Chloe Cole, L. C. Chase
Noble Beginnings by D.W. Jackson
The Lazarus Particle by Logan Thomas Snyder
First Love and Other Shorts by Samuel Beckett
The Fields Beneath by Gillian Tindall
The Psyche Diver Trilogy: Demon Hunters by Baku Yumemakura
Alcazaba by Jesús Sánchez Adalid
A Taste of Trouble by Gordon, Gina
Firebrand by Antony John
Our partner