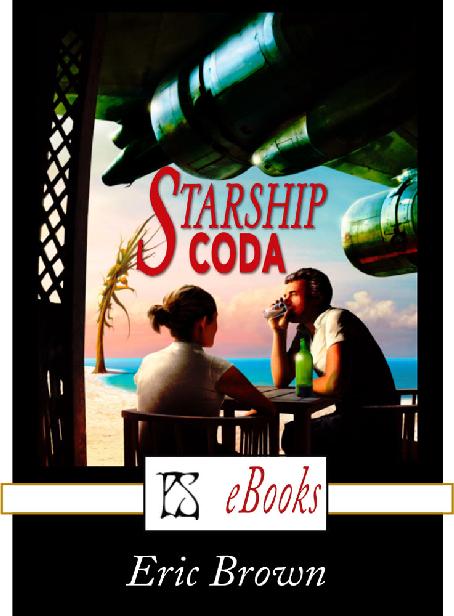 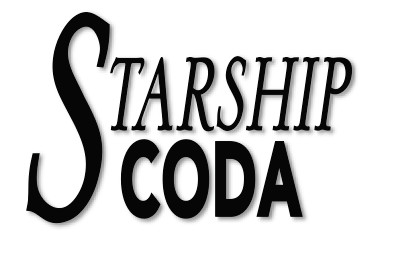 Ten years have passed since the events at Tamara Falls and our involvement with the Skeath. We kept a low profile in the aftermath—the last thing we wanted was for our quiet way of life to be interrupted by sensation-seeking tourists and scabrous media-hounds—but perhaps inevitably word leaked out that my friends and I had played a part in the opening of the giant pit on the site of the Falls, and the subsequent, if brief, appearance of another golden column in the vicinity.

For a few months Magenta Bay was inundated by the curious from across the Expansion. The
Mantis
was the locus of their attention, and our watering hole the Fighting Jackeral was rendered out-of-bounds as hordes of tourists flocked to the bar. Reporters and film-makers were a more serious problem. They wanted our personal stories and would stop at nothing to get them. After a month of continual pressure from the agencies, we held a council of war and Matt Sommers called for drastic action. A few weeks later he purchased the remaining section of the headland he didn’t already own, and then fenced it off. The following day Hawk arrived at the
Mantis
with an engineer, severed all the service leads, and—to the amazement of the gathered crowd—piloted the ship across the bay and settled it at the very tip of the peninsula a hundred metres from Matt and Maddie’s low-slung dome. That night we celebrated with a meal on the veranda of the dome.

As the months turned to years, interest in us and our story began to wane and our lives returned to normal. The idea had been, originally, that I should move the
Mantis
back to its original position across the bay—but Hannah and I rather liked its new location on the headland, looking out over the straits, and Matt and Maddie had no objections to our closer proximity. So we stayed.

Hannah had one year to work before she retired from her post as the Deputy Commissioner for the Mackinley Police Department, and I spent my time looking after the
Mantis
, reading, taking long walks and dropping in on my friends from time to time. Our daughter Ella was in her final year at school, had a great group of friends, and hardly spent any time at home.

Matt was putting the finishing touches to a series of emotion mobiles he’d been working on for the past two years, and Maddie was selling more and more of her distinctive pottery. Hawk spent his days repairing old starships while Kee extended her alien garden into the vacant lot behind his scrapyard. We met every Saturday for a drink and a meal at the Fighting Jackeral, and life was about as peaceful as it could be.

Then I received a holo-cube from my ex-wife, Sally.

It was a brilliant summer afternoon and we were finishing lunch on the veranda of the Fighting Jackeral. Hawk and Kee had just returned from ferrying a business party through the golden column to Mars, and Matt was winding down after completing the last of his mobiles.

“They’re quite unlike anything he’s done before,” Maddie was telling me and Hannah while Matt was at the bar.

“Ah,” Hannah said. “So that’s the reason for all the secrecy?” For the past two years he’d hardly spoken about his ‘work in progress’.

“For a long time he didn’t know if they were going to work or not, so he didn’t want to publicise what he was working on.”

“But he’s happy with how they’ve turned out?” I asked.

“I am,” Matt said, returning with a laden tray.

We helped ourselves to beers. “They’ve exceeded my expectations,” Matt went on. “That said, they might disappoint some people.”

Matt shrugged. “They’re…very light. Almost inconsequential. More…I’d call them entertainments. The way I looked at it,” he said, smiling, “was that after the last cycles of crystals, which frankly drained me, I wanted to have fun and do something less introspective—and damn the critics.”

I raised my glass. “I’ll drink to that.”

Matt glanced across at Maddie, then said, “Tell you what, how about we have a private viewing tomorrow morning? Come along to the dome and you can experience the mobiles for yourself.”

“Try keeping us away,” he said.

The years had been kind to Kee. I swear that she looked just as young as she had when I first met her, over twenty years ago. She was slim and lithe, her face unlined. By human reckoning she was in her fifties, but she looked about fifteen.

Hawk had weathered well, in the way that some men do; his big, rangy frame was a little stooped these days, his craggy face lined, and his hair iron-grey—but it suited him and heightened his disreputable, piratical aspect. They made a fascinating pair, seen side by side.

Now Kee was staring along the red beach with that fixity of gaze peculiar to the Ashentay. “Look, David,” she said. “You have a delivery.”

A silver InterWorld courier van had pulled up outside the old vacant lot where the
Mantis
had once stood. The delivery man climbed out, parcel in hand, and stared at where the ship had been.

This was the first InterWorld delivery I’d ever received, and I was curious. I stood and called out, and the man turned and waved. He trudged through the sand and climbed the steps of the Jackeral. “Conway? An express parcel direct from Earth.”

I showed him my ID, thumbed his softscreen, and took receipt of the small, square parcel.

“Direct from Earth?” Hannah said. “It must have cost a fortune.”

I set the box on the table and opened it, aware of everyone’s attention.

I turned it around, looking for a note or something to explain who’d sent it. I checked the packaging, but the only thing printed on the silver paper was my name and address.

“Well, aren’t you going to activate it?” Maddie asked.

“Here’s goes,” I said, reaching out to the slide on the corner of the cube.

The jet black facets should have lit up, showing the face of the communicant. As we stared, however, the cube’s planes remained blank. Seconds later a voice spoke.

“David…It’s Sally. I’m sorry to communicate like this, at such short notice. But I’m coming to Chalcedony and I was hoping we might be able to meet up. We…” there was a long hesitation, and I was aware of the silence around the table, “we really need to talk. I’ll be coming to Magenta Bay on the twentieth. I’ll be in touch when I arrive. I’ll see you then.”

A brief silence, then the message began again. I reached out quickly and turned it off, then sat back and let out a long breath. “Well,” I said, smiling across at Hannah, “if she thinks she can just announce her arrival like that—”

Hannah interrupted, “You’ve got to see her, David. You can’t let her come all this way without…”

“I don’t want to see her, Hannah. Despite what she said, we have nothing to talk about. We got all that out of the way years ago, before I left Earth. It’s presumptuous of her to think she can just…” I gestured.

The twentieth was the day after tomorrow, Monday. Ideally I would have needed weeks to prepare, mentally, for the encounter.

Matt said, “She clearly wants to see you about something, David. It can’t do any harm, surely?”

I sat and thought about it for a long time. At last I said, “I don’t really want to be reminded of…of what happened back then.”

Matt leaned forward. “But you came to terms with that years ago.” He smiled. “You have nothing to fear.”

“You’re right. It’s just…” I gestured futilely. “It’s just that I have everything I want here. Life is damned near perfect, and the thought of her intruding…”

Maddie reached across the table and took my hand. “See her. Exorcise her ghost. Then she can bugger off back to Earth and leave you in peace.”

I could always trust Maddie to speak bluntly.

“Very well…” I said. I looked around the table. “Who’s for another drink?”

When I returned from the bar with a laden tray, Kee said, “I wonder why she didn’t show herself, David?”

“I don’t know. Another curious thing was her voice. It was Sally—but she sounded, I don’t know, somehow younger.”

Hannah said, “Vanity, David. She didn’t want you to see what she looked like, now, so many years after you last met. As for her voice…” She smiled.“I think she was…compensating.”

I swept the cube from the table and lodged it under my chair. “Enough of that,” I said, and changed the subject.

anticipation, tinged with apprehension. I feel privileged to be granted a private viewing, of course, but I’m always slightly ambivalent: part of it is fear that my friend’s latest work might not be up to his usual high standard, and another part the possibility that I might not be up to evaluating it.

On Sunday morning Hannah and I strolled from the
Mantis
, along the beach to Matt and Maddie’s dome. Hawk’s roadster was already drawn up outside, and he and Kee were sitting on the balcony drinking sava juice.

Maddie greeted us and poured long glasses of ice cold juice. “Matt’s in his studio, putting the finishing touches to the mobiles.”

We were draining our juices a few minutes later when Matt appeared at the sliding door to the dome. “Good, the gang’s all here. If you’d care to follow me.”

He led us into the dome to a spiral staircase that wound down to his studio, a vast area built out from the side of the dome and filled with sunlight.

He escorted us to the glassed-in extension, a relaxation area dotted with loungers and reclining chairs. Hanging from the glass ceiling, seemingly floating in mid-air at head height, was what appeared at first glance to be a polychromatic chandelier. It consisted of a thousand silver arrowheads scintillating in the sunlight. Visually it was impressive, but I knew that, like most of Matt’s creations, it would work on more than just the visual level.

Kee said, “There’s just one of them?”

“I’ve made fifty,” Matt said. “But they’re all essentially the same. When they’re exhibited, patrons will need only to experience one of the mobiles, and I’ll be limiting the exhibitions to no more than a hundred people at a time.”

“You simply stand with your head in its centre, and…experience what happens then.” Matt raised a hand and went on, “and if you think that will be a little boring for the onlooker, well…”

“I’ll have to adjust its height for the giant,” Matt said, stepping across to a cord and pulling. The mobile rose half a metre, and Hawk crossed the floor and stood beneath it.

As we stood around watching Hawk with his head shielded by the sparkling mobile, Matt said, “Each of the tesserae is, for want of a better word, an emotion transponder. They detect the electrical signals in the subject’s brain and resonate with the same frequency. This has the effect of…”

The Time Rip by Alexia James
Bonded to the Alien Lord: Sci-fi Alien Invasion Romance (Warriors of the Lathar Book 3) by Mina Carter
Bliss by Opal Carew
The Safe House by Nicci French
A Real Basket Case by Groundwater, Beth
The Ballad of Rosamunde by Claire Delacroix
Desire's Fury (Viking's Fury Book 2) by Violetta Rand
The Girl Who Saved the King of Sweden by Jonas Jonasson
Lacy by Diana Palmer
Naughty or Nice by Harmon, Kari Lee
Our partner