Stasis: A Will Vullerman Anthology 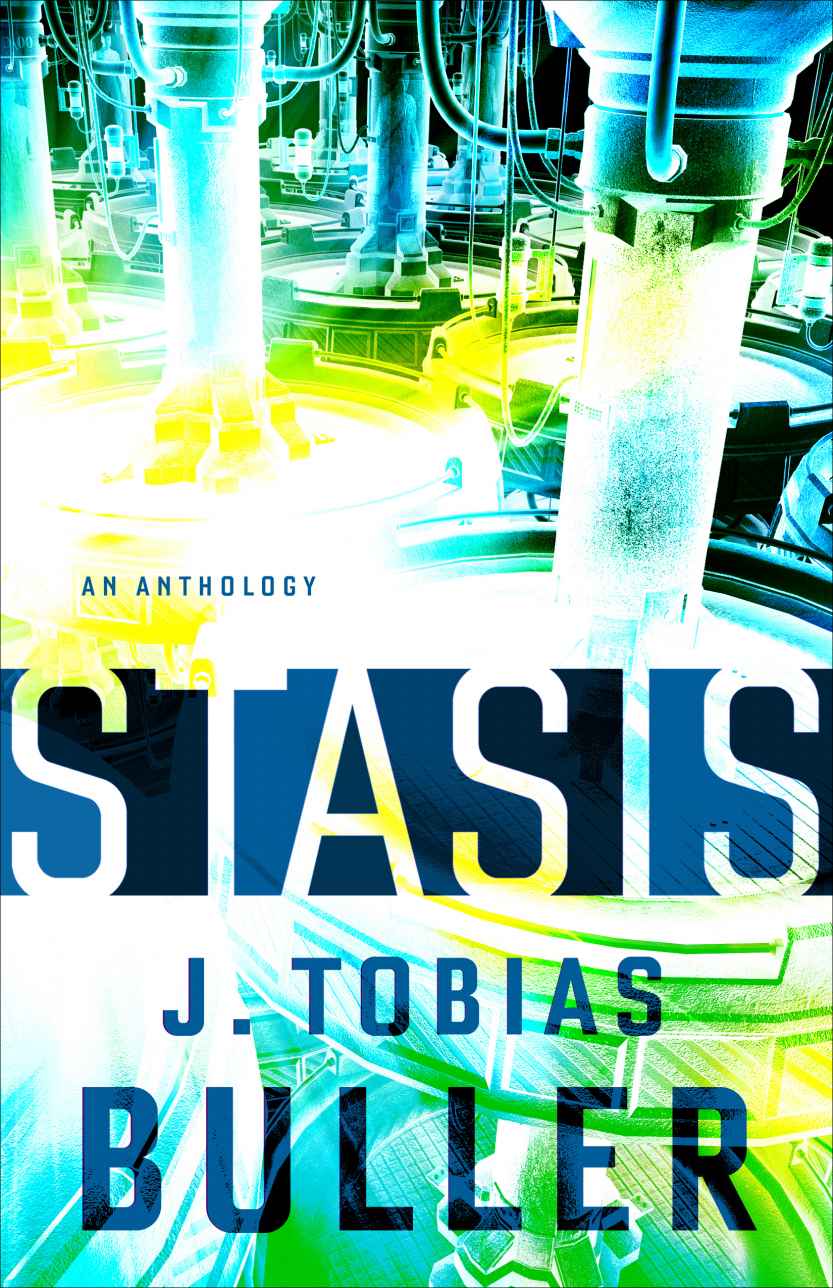 STASIS
A Will Vullerman Anthology

All rights reserved. Except for brief quotations in reviews, no part of this story may be reproduced, stored in a retrieval system, transmitted in any form or by any means (printed, written, photocopied, visual electronic, audio, or otherwise) without the prior permission of the author, or the author will enlist the help of the ASP to track down said lawbreakers and justice will be done upon them.

This is a work of fiction. Names, characters, places, and incidents are either a product of the author's imagination or are used fictitiously. Any resemblance to actual persons, either living or dead, is entirely coincidental.

The Thirteenth Call: Part I

Will Vullerman was crossing the street when the call came. A twentieth-century phone ring jangled through the earpiece lodged in his left ear.

"Caller ID,” Will said. He stepped onto the grey sidewalk and stopped.

"Caller classified," replied his comm. Will could feel the civilian comm thrum almost imperceptibly against his chest, where the main driver was strapped with miniscule threads to his torso. From there, tiny insulated wires ran to both of his ears and connected a mic near his mouth.

Shoot. Couldn't they give him a moment of peace? It was supposed to be his day off, for crying out loud. And he had barely walked the length of his own street.

He let the call ring in his ear for a moment longer. Maybe if he made them wait, they'd begin to understand how he felt.

An unfamiliar male voice reverberated through his earpiece. "Vullerman."

"Yes?" Will put a little emphasis on the word, trying to get his annoyance across.

Typical. Straight and to the point—if the ASP had a motto, that would be it.

Will glanced around; there wasn't a car in sight. It was a Sunday morning, after all. To his left, the street was deserted, with clean sidewalks and cookie-cutter houses hiding behind tall, whitewashed fences. Government-funded, of course—otherwise, they wouldn't look this picture-perfect.

To Will's right, the houses continued, and disappeared around a bend in the road. A few neat rows of immature apricot trees hid the rest of the road from sight. More government work. Couldn't they attempt to make it look more natural?

He sat down on the curb and waited. The ASP car would show up, eventually. But how long would they keep him waiting?

Barely five minutes, as it turned out. A nondescript brown van with tinted windows rounded the bend in the road and stopped in front of Will. The door slid open, shedding light on the van's floor and on one of the leather seats. Will stood up and climbed into the car, and the door clicked shut behind him.

A dim, warm light turned on above him, illuminating the interior. Two long couch-like seats sat opposite to one another along the width of the car. Thick glass separated the driver from the passenger section.

In one corner of the front-most seat sat a man of African descent in a black tux. Large, almost square shades with steel rims perched high up on the man's nose.

"Sit down, Vullerman," the man said. Will recognized the voice: the same one that had called him a few minutes earlier.

Will sat down, and the van began to move. He could feel the gentle vibration through his shoes. Evidently the man—Will labeled him “Sunglasses”—was someone of importance from the ASP, but who? And, more importantly, why did he need Will?

"I gather that I'm needed, sir," Will began.

"But you resent it?"

Will grimaced. "Sir, it
was
my day off."

"You assume that I'm from the African Secret Police."

Sunglasses shifted, setting his elbow on the armrest, causing his silver cuffs to slide halfway down his forearm. "No, not directly."

So who
was
he? Will let no outward trace of his discomfort show, but he gritted his teeth. How could he have been so stupid? He had just climbed into the car of a strange man...who wasn't from the ASP.

Will threw in a general question. "Sir?"

"Spit it out, Vullerman. If you have questions, ask them. We don't have all day."

All right, if Sunglasses wanted to play the mind game, Will would play his game. "Are you a businessman? If you're looking for some confidential work, you can look somewhere else." Only rich businessmen and the government could afford this kind of vehicle, after all.

The man sat in silence for a moment, and then a laugh erupted from his mouth, showing his teeth, a vibrant white even in the dim lighting. "Very clever, Vullerman. If you want to know, I come from a separate division of the Bureau of Public Safety. I'm not from the ASP, but that's where I got my intelligence on you."

"And what was that intelligence?"

Sunglasses chuckled. "Quick of mind, well-trained, independent. Top operative of the ASP with fifty-one successful missions, forty-two of which were solo. Also possesses a sharp tongue."

Ouch. But least they had gotten all of the important attributes.

"You're probably wondering why I've called you," he continued. "I'm from the Ministry of Overseas Affairs. Yesterday, we had a...strange report. Our satellites picked up something unusual over North America. You are familiar with the Kansas region?"

Will nodded. "My grandparents had emigrated from the Midwest, pre-war. Both of them grew up in the Kansas region. They used to talk to me about it."
God have mercy on them
, he added silently.

"Have you ever wanted to visit?"

The question caught Will off guard. "Sir?"

"I know, Vullerman. America is an international off-limits zone. Which is why you'll be going in alone."

Will's head whirled. Him? Go to America? "But sir, what about the New London Treaty?"

The man's eyes were hidden behind those dark sunglasses, but Will could feel his stare. "Vullerman, let's just say that what you may find in America could be worth far more than following the New London treaty."

Sunglasses paused. "I have a signed executive order from the Supreme President himself, if you want to know. And if you refuse to comply, you'll have to be put under house arrest until another agent can undertake the mission."

So they were going to force Will into this.

But then again...going to America! Hadn't he always wanted to go?

After a moment of silence, Sunglasses added, "We've also been testing out the best anti-nuclear matter suits specifically for this mission. You won't be going in unprotected."

Okay, the going-to-America bit had won him over. But Will had one more fish to fry.

Will crossed his arms and leaned back again. "That I get a longer vacation leave."

Sunglasses smiled. "Consider it done. We've also arranged to have a substantial sum of money transferred to your account."

Well, at least he'd get some more rest out of the deal. And the extra cash would be welcome. "All right, so brief me, sir. What's going on, and what do you need me to do?"

Sunglasses handed him a black-bound notebook. "This has all the information you need."

"It's the best way to communicate without the possibility of it being traced. Lose it, Vullerman, and you'll wish you were dead."

Obviously this was a big deal. "So what did this satellite find, exactly?"

"A signal. The satellite detected a cloaking signal from below-ground, where western Kansas used to be. When it broke the code and disabled the signal, the satellite discovered that the signal had been messing with the satellite's survey reports."

Will put the notebook in his lap. "But no one's had that kind of technology since—"

"Since before the American war.” Sunglasses pushed his shades farther up his wide nose with his pointer finger. “Our experts suspect that it might be a remnant of old American tech."

Will stared at the spotless floor of the car, thinking this over. Scientists had discovered ways to cloak things like planes from ground radar, sure, but to corrupt satellite signals would take more advanced technology. If the government—the already-powerful United Republic of African States, who funded the ASP—could get their hands on American tech, they'd be far ahead of everyone else... "So what was the signal cloaking?"

"An underground hollow," Sunglasses said. "The satellite reported that there was a 96% chance that it was man-made."

"Typical tech." Will resisted the urge to laugh. "They never give a straight answer."

"That's the technology we have to rely on, Vullerman. You either trust it or you don't go."

Will shrugged. "I meant no offense. Continue, sir."

Sunglasses didn't reply for a few moments. Obviously he didn't like Will's breach in protocol. "The government is sending you in to check it out, Vullerman. The satellite discovered an entrance that appears to have survived the war."

"There wasn't much in western Kansas for the nukes to hit, I suppose."

"Apparently not." Sunglasses gestured to the notebook. "The coordinates that unlock the door are in the notebook. If you have to transfer them to something electronic, make sure and do so after you're overseas.”

Will opened the notebook again and found the coordinates: a lengthy string of numbers, letters, and symbols. "All right. So how will I get to America?"

"We've arranged to have a small jet transport you."

Will raised an eyebrow. "Wouldn't that be visible to everyone else? It's a dead giveaway that the Republic decided to disregard the New London Treaty."

Sunglasses shook his head. "The jet is equipped with our newest and most advanced cloaking technology. You'll be flying high, so it won't be visible from the ground. There hasn't been anyone in America for decades, so you'll be able to fly lower once you reach the Kansas area. You'll be skydiving from there. You've had experience with that, I understand."

"You could say that." It had been more falling from a plane than skydiving, though. And the occupants of the plane weren't being very friendly at the time. "So once I'm on the ground, I'll find this underground lair and check it out?"

Sunglasses nodded. "If you find anything important, you'll return to the surface and report back to us. The suit has a comm system built-in."

"Mmm." Will digested this for a moment. "When do I fly out?"

Will grimaced. It was a tight schedule, but he'd be ready. "All right, let's do this."

Will climbed the portable stairwell into the jet. It was sleek, probably one of the newer models...not that he knew anything about planes.

He crossed into the jet, and the hatch slid shut behind him. The pressure-compensator hissed, and then the silence returned. A harsh fluorescent light blinked on a few meters above him, lighting the corridor. The plane's electricity probably worked on solar power, then. More power for the engines, he guessed.

Will walked down the corridor and opened the door, revealing the front of the jet. A dark-skinned man sat in the seat at the front, with a dizzying array of buttons, switches, levers, and screens spread out in front of him. Ugh. Just the sight made Will's head spin.