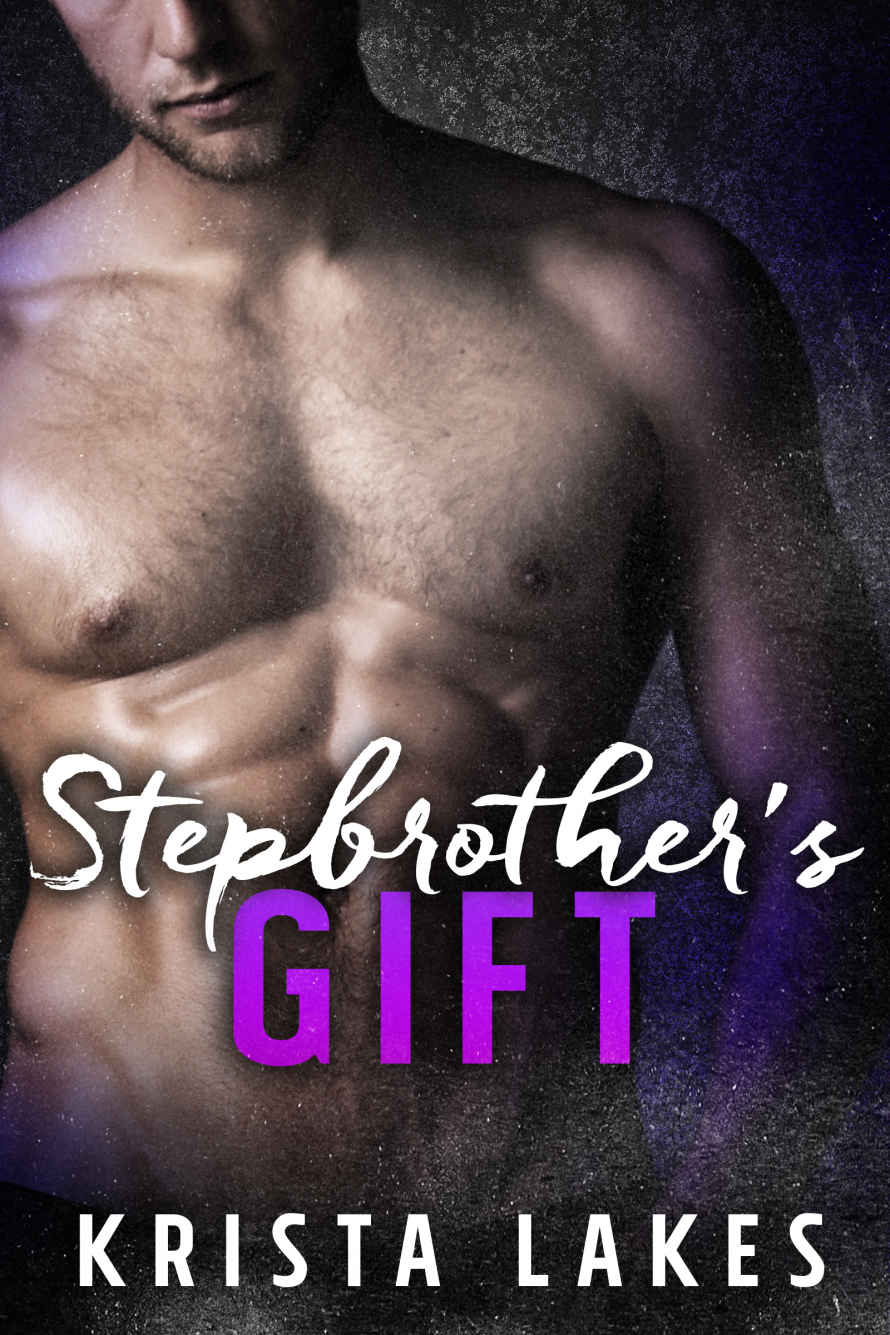 An extended preview of my other stepbrother romance:

Check out my other stories!

Years ago, James thoughtlessly gave me an IOU instead of a Christmas present.

I thought I had pushed him out of my mind, but years later, I found myself sharing a home with him again.

In one moment, our relationship changed forever. I found out firsthand what had made all those girls moan while we had shared a wall years ago.

Now it’s time to collect on that jerk’s IOU. Even though he's a billionaire, the thing that I want from him isn't money. I want a gift that will last me a lifetime...

H
is eyes stared at me, and for the first time they strayed from my face. As he looked over my figure, I saw a flicker of the darker desire I recognized from his car. It was something.

I knew just what to do. I pulled my purse around and opened it, digging for the card.

“Are you all right, Allie?” he asked.

“Just give me one second,” I said. I found it. I took out the card, rubbed it between my fingers for luck and courage, and set it on his desk. “Here.”

He picked it up. A grin spread across his handsome face as he recognized it. “You still have this?” He laughed. “I always figured you would have thrown it away as soon as you passed a trash can.”

He looked up at me, then checked both sides of the card. “No expiration date. That was foolish of me.” He looked every bit the professional businessman while looking over this contract, and it turned me on even more. “Okay, well I’m a man of my word. What do I owe you?”

I tried different ways of saying it in my mind, all of them sounding strange, artificial, wrong. But as the silence drew out I gave up, and just said what I felt. “You,” I squeaked.

It sounded silly, like some over-wrought scene from a badly directed movie. I waited for him to laugh, but he didn’t. He played with the card in his fingers and stared at me. Finally he stood up and walked around his desk. He handed me the card.

“You want to tell me what’s really going on here?”

“That was a stupid mistake,” he said, his voice darkening. “And I’m sorry for it. I crossed a line with you I had no right to cross.”

“There’s nothing else to say about it.”

“Your brother,” he finished for me, his mouth forming a cruel hard line.

“Does that really make any difference?”

“It does for me,” I said, standing up a little straighter. I was getting angry, and it was giving me a little courage to stand on. “It’s not like it's incest.”

James seemed to flinch at the word, then laughed. “Are you listening to yourself?”

“Stop it,” I snapped. I pushed his chest. It was hard under the oxford shirt he was wearing. He didn’t move. “Don’t try to make this a joke.”

“The kiss, you jerk,” I said, swatting his chest.

“I already told you what it was. It was a mistake.”

“It didn’t mean anything? You don’t feel anything?”

“Jesus, Allie. Are you listening to yourself? And besides, aren’t I the guy who ruined your life?”

“Just tell me, then. If you tell me that it was really just some mistake and you don’t feel anything for me, I’ll leave right now.”

I swallowed, cursing myself for being so direct. I was practically forcing him to reject me.

Something inside of him broke. He crossed the distance between us in a heartbeat. Before I could say anything further he grabbed me, one hand turning my face up to his and the other seizing my hip. He pulled my trembling body tight against his.

But before he could swoop down and kiss me, I stood up on the balls of my feet, pressing my breasts against his chest and running my arms around him as I reached for his lips with mine.

It was too violent to call it a kiss.

D
on't forget to sign up for
my newsletter
! You'll be the first to see my new covers, comment on new books of mine, and always know when books are available for free or on sale!

I
'm in bed with Danny,
I thought to myself.

Logically, I knew that it was Danny, my boyfriend. And as I looked at the sweaty body thrusting above me, it was clearly Danny.

I
wanted
it to be Danny.

However, as the desire increased, I could feel him getting closer to orgasm. I closed my eyes, allowing the pleasure to wash over me. Danny's cock was big, and it filled me nicely. So big, that...

Suddenly, my thoughts turned elsewhere. There was someone else fucking me now. Someone I had always dreamed of, but could never be with.

My eyes shot open.
No
, I thought. I wanted to stay here, with Danny.

Danny grinned as we locked eyes, and I did my best to smile back at him. He picked up his pace, plowing into me, spreading me open. I began to moan, just as I heard girls moan through that thin wall I had shared with
him...

I could feel Danny swell even bigger and tense up, his jaw opening in a wordless cry. His “O” face looked funny, but I knew it was sincere, and it turned me on that I was able to do that to him. He pounded deeper and deeper, until he froze. His hips spasmed twice and that was the end of our lovemaking.

As soon as he was done, he pulled out of my body. He ripped the condom off quickly, tying it in a knot and throwing it
toward
the trash can, but not making it in. I knew that he wouldn't even try to pick it up later. That would be something nice, and he never did anything nice.

The condom was by his insistence, of course. He knew I wasn't on the pill and refused to do any kind of withdrawal method with me. I was actually kind of glad. Danny was alright, but he was hardly father material. Still, I thought, as I looked down at my tummy, I would love to see it filled with a baby someday. Maybe someday soon. Maybe even with Danny, if he would grow up a little bit.

Danny laid his head on the pillow next to me. “That felt good.”

He grunted with pleasure, then immediately got up. He started to pull his pants on with no underwear. “So, I'll see you tomorrow, then?”

I paused. “Of course I'll see you tomorrow. You promised you'd drive me home, remember?”

I couldn't believe this. “Things” was probably just playing video games or jerking off to Internet pornography. “What? But I have to get home for Christmas!”

He shrugged his shoulders and didn't say another word. He just kept putting his clothes on.

I stood up “Hey, I'm talking to you, asshole,” I said, my breasts jiggling all over the place.

“I don't know what to tell you, but I can't take you,” he said, refusing to look me in the eye.

“You promised! How am I supposed to get home?”

“That's your problem,” he said. He put on his shoes and walked toward the door.

“Then I guess we're done,” he said, opening the door and slamming it behind him.

He
wouldn't have left me high-and-dry like this
, I thought. I shook my head.
Stop thinking about him, you idiot. You'll never be with him.

M
y evening was spent frantically looking for a ride home from several of my friends. Springfield was fairly close to the campus, but still over a four-hour drive. I tried several ex-boyfriends, promising them the world if they'd be my hero. None of them were willing to help out. With every rejection, I sighed a little louder. That was the problem with dating nothing but assholes.

My roommate, Nicole, kept looking over at me and glaring. I knew that she thought that sleep was the key to her beauty, and since she spent every weekend staying out all night partying, she had to get her beauty sleep every chance she could get. Considering how beautiful she was, and considering how many guys she brought home, I wasn't all that sympathetic.

In the end, I ended up falling asleep at 2 am, exhausted and no closer to home than I had been before. I was down to my backup plan of public transportation Dad's credit card. Not exactly the way I had intended to start my Christmas vacation.

I set an alarm for 4:30 am, which when it went off, made Nicole glare at me again. Her gorgeous blonde curls had a serious case of bedhead going on, which at least got me to giggle.

“Are you seriously awake at this hour?” she asked.

I groaned and turned on the light, slowly getting dressed. Luckily, I had already packed in anticipation of Danny driving me home, but I still felt like today was going to be a really long day.

I knew it would be impossible for me to get a cab at this hour, so I walked the three blocks to the nearest bus station, dragging my rolling suitcase behind me. This was where my life had brought me to: the rich girl reduced to walking in her expensive tennis shoes in order to take a bus trip that would likely take an hour, to hopefully take a plane trip home that would probably take just as long.

I grimaced when I thought about what my dad would think. I wasn't the rich one, of course. He was. I'd be using my emergency credit card to pay for this flight, which meant that he'd be the one paying for my last-minute mistake.

All the Lucky Ones Are Dead by Gar Anthony Haywood
Discworld 27 - The Last Hero by Pratchett, Terry
Just a Taste of Me [Wolf Creek Pack 2] by Stormy Glenn
Beauty & The Biker by Glenna Maynard
Unmasked by Michelle Marcos
Saint of Sinners by Devin Harnois
Forsaken House by Baker, Richard
Origin in Death by J. D. Robb
Attack of the Spider Bots by Robert West
Assassin's Hunger by Jessa Slade
Our partner