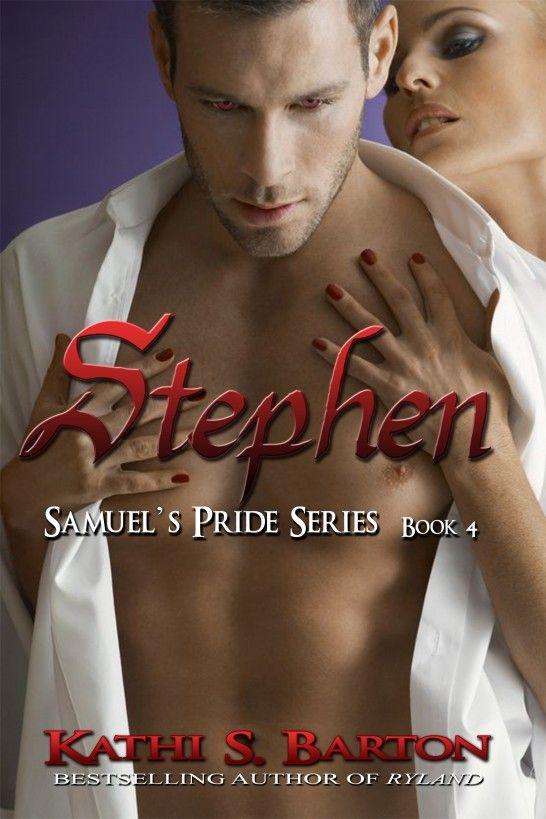 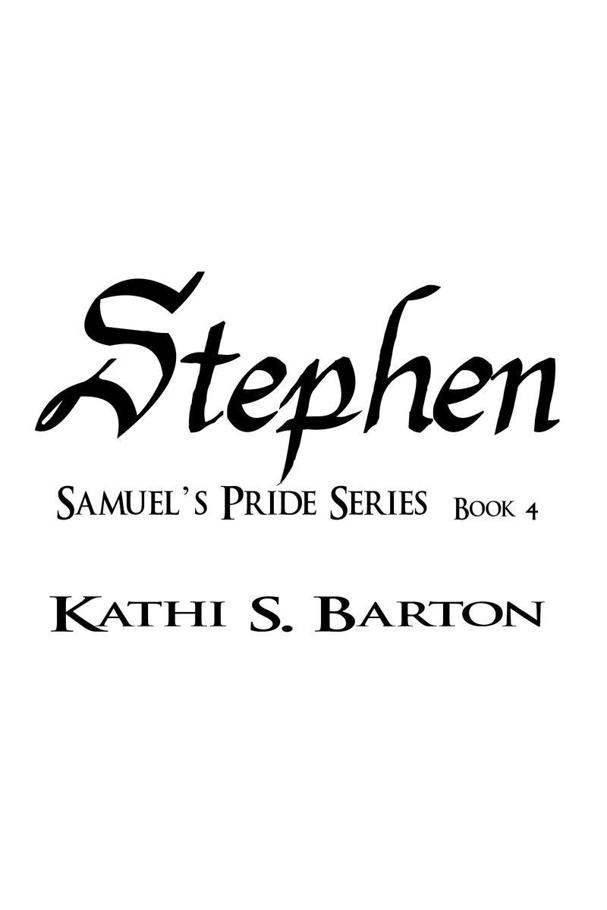 All rights reserved. No part of this book may be used or reproduced in any manner whatsoever without written permission, except in the case of brief quotations embodied in articles and reviews.

To my own Velvet December. Thank you. From the bottom of my heart I thank you for giving my villain life! She is, in a word, a bitch. I hope you enjoy Velvet as much as I did writing about her.

The meeting could have gone better, he supposed, but Stephen wasn’t in the mood to be ordered about at this stage of his life. Grinning, he thought of the look on Jared’s face when he’d told him how old he really was. And he knew that Samuel hadn’t helped a great deal with the situation either.

“
You think you have powers that the rest of us don’t? Let me tell you, buddy, I’ve been around for over three thousand years, and I can do things you only can dream about.” Stephen had looked at the man and then at his friend, Samuel, before continuing. The kid just thought he was all that, didn’t he?

“
You gonna tell him or can I?” Stephen shrugged at Samuel as if he didn’t care who told the idiot. Samuel looked as if he might have enjoyed telling the little pisser more than Stephen would anyway. Stephen was sure it would be a good deal safer for the idiot. “Stephen isn’t just old, you moronic dick. He’s been around over twice your lifetime.”

“
There is no way. If that were true, he’d be in charge of all vampires.” Jared looked at Stephen then back at Samuel before he continued. “You’re lying.”

“
I don’t lie. And for the record, he was asked…no, he was begged…to watch over all you little piss ants, but he declined. For whatever reason, he thought he’d kill the lot of you before he got things the way he wanted.” Samuel laughed. “I can see now why he didn’t want the job. I might kill you myself and be done with it.”

Jared had hissed at Samuel, but before his friend could react, Stephen had reached across the table and grabbed Jared around the throat. And when he let a little of his beast go, Jared stopped struggling.

“
This is how this is going to go. You can either pick door one or door two. It matters little to me. Understand?” Stephen wanted to snap Jared’s neck but waited while the man nodded as best he could. “Good. You’re going to go out of this diner and never return. Your orders to me, any of them, will be sent to me via email or a messenger. Either way is fine by me. Doesn’t mean I’ll heed them, but you can send them. Or—and this is the one that I’d like to have you pick—you can simply open that mouth of yours again and I will tear your throat out.”

Stephen let him go, and Jared opened his mouth. Just as he was reaching for him to kill him, Samuel interceded on Jared’s part. “Don’t,” was all he said, and Jared looked at him. Then when he stood up and walked toward the door, Stephen looked at Samuel.

“
I would rather have killed him. He’s going to be a pain in my ass.” Samuel nodded. “But you still saved him. Why?”

“
Because, my dear friend, had you killed him as we both wanted you to do, you would have been forced to replace him. Do you really want to be the Master of all Vampires?” Stephen shuddered, and Samuel laughed as he continued. “Right. I didn’t think so. And because I saved you a lifetime of servitude, you can buy me breakfast.”

That had been over an hour ago. And now he sat at the counter waiting for…well, he had no idea, but he still waited. When Joann came toward him with a cup he started to tell her no, but she sat it in front of him and he could smell the warm blood.

“
Thought you could use this about now.” He nodded, not sure what to say to her. He knew that she was a wolf, but had no idea how she knew what he was. “Samuel. He called just now and said that you were in need of something to sustain you. Took me a minute to figure out what he meant. Then he said microwave it for only fifteen seconds.”

“
Thank you.” She nodded and turned toward the door when the little bell over it rang. The child…no, that wasn’t right. The woman standing there looked like she’d crawled from a deep hole. The hat she had on obscured any hint as to what color her hair might be, or even if she had any. Her pale skin made him think it was that way naturally rather than from her predicament, whatever that might be. For some reason he knew she was homeless because she was hiding rather than from a monetary situation. Before he could ascertain why she looked so dirty yet her face and hands were so clean, Joann spoke.

“
You know you can’t come in here on Mondays. He’s in the back. You come on—”

The woman put out her hand, and in it was a wadded up bill and some change.

“
I have money today. Not a lot, but enough for some tea.” Stephen glanced at Joann when she sighed. “I promise it’s all I want. A cup of hot tea. If you want, I’ll take it to go, but I’d like to sit and get warm.”

“
Sit.” Joann looked at him as she moved toward the pots of coffee and water and cups. “If Bob catches her in here again, he’s going to go off. He don’t like her much.”

Joann shrugged at his question, and he looked back at the woman. She’d sat in the booth closest to the door and was spreading out her money. From where he was sitting, Stephen could see that she had one dollar and forty-seven cents. The cost of a cup of tea was a buck and a quarter. As Joann made her way to the girl, she picked up one of the dirty plates on the bar where Samuel had been eating and sat it on the table in front of the woman. He assumed it was to make it look as if she had ordered something if Bob came from the back.

“
Thank you ever so much.” She inhaled the steam coming off the cup as if she’d been smelling a fine wine. Stephen watched her as she eyed the sugar but didn’t touch it. He’d bet anything that she was afraid she was pushing her limit and decided it wasn’t worth the thought of getting tossed out over it. Stephen turned back to his own cup and reached out to the woman’s mind.

It was locked. Not just blocked from him, but locked down. He couldn’t even breach the thoughts that she was having now. Turning slightly, he looked at her and was startled to see her glaring at him. Stephen had never had anyone know he was in their mind before. Turning back, he looked at Joann, who was standing near the window looking at him.

“
I don’t know anything about her. Not even her name. She comes in about once a month to get something hot. Usually it’s just tea or something.” Her voice was low but he could hear her just fine. “Once or twice she’s come in to get warm and just sat quietly in her seat. Bob thinks she’s a leech, but she’s never done anything while in here.”

“
She’s human?” Joann nodded and the bell rang again. Stephen didn’t look this time, almost afraid to see who else would come in. When a sudden noise sounded behind him, he turned just in time to see the woman slicing the head off Jared’s shoulders. He was gone in seconds.

Stephen was stunned. The long silver blade that skittered across the floor toward him was nothing compared to the one in the woman’s hands. She didn’t move as she looked at him and slid the sword into a scabbard that hung from her shoulder and down the front of her clothing. Closing up her coat, she looked as normal as she had when she’d entered.

“
He was going to kill you and Joann.” Stephen nodded but said nothing as his savior continued. “I don’t know you, but Joann has been kind to me.”

“
So you would have let him kill me except for her?” Her shrug wasn’t very encouraging. “I see. And for what reason do you suppose he wanted us dead?”

“
Just you. She was a witness.” The girl staggered slightly, and Stephen stood up. The sword was out again before he could take a step. “Move and I’ll finish what he was going to do. I’d very much like it if you were to sit back down.”

“
I just wanted to see if you were all right.” Her stance told him she wasn’t going to allow him anywhere near her, and for some reason he was proud of her. “May I buy you breakfast for saving me?”

Bob came out of the back room then, and Stephen turned toward him. He was nearly ready to defend the woman when Joann started talking. She was telling him what had happened and that the stranger had kept murder and mayhem from ensuing. Looking back at the woman, Stephen wasn’t really surprised to see that she was gone. Striding toward the door, he opened it to go after her, only to find himself in the arms of Samuel.

“
She said you’d need me.” Stephen asked him who. “Don’t know. Some woman contacted me and said that the vamp was in trouble, that I was to get my ass here. Actually, she said to get my fucking ass here. She is a mite on the intense side if you ask me. But I did what she said. What’s up?”

“
Did she tell you who she was at all?” Samuel shook his head. “Jared came back with intent to kill me. I’m supposing because Joann was a witness to his crime, he was going to take her out as well. But whoever contacted you—and I’m only assuming it was my savior—pulled out a sword and killed him first.”