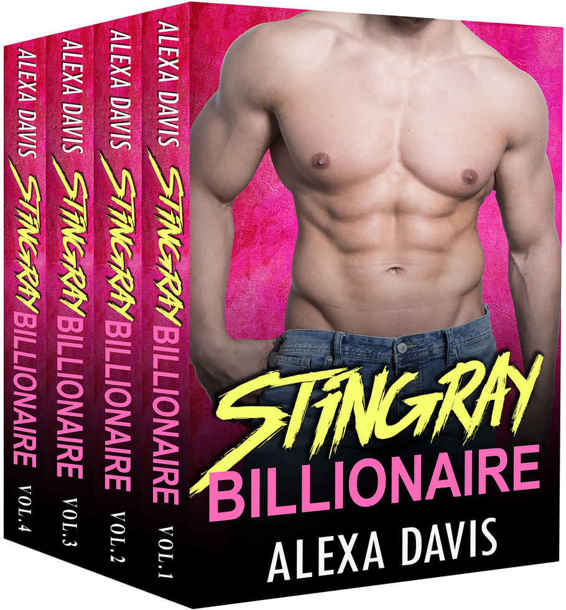 I hope you enjoy the entire Stingray Billionaire series.
If
you want to get an email as soon as my next book is published then click here
.
I’ll also include you in all the giveaways I do automatically.

Get my
never released free book Tempting for a limited time.

“The Louis XV-style
double-mirrored armoire is your best bet if you’re looking to impress your
guests, and you’ll have more than enough room to
store your
knick-knacks in the display area
,”
I tell Mrs. Taber as she’s glancing through the furniture section of the shop.

It would be a thrift
store if they created thrift stores for the sole purpose of supporting the
owner’s unwillingness to pick up a marketable skill.
This shop is
Troy’s dream.

Troy Kramer is my
boss
and the owner/founder of Rory’s Treasures.
To this day, I don’t know who Rory is. Every time I ask, Troy’s only answer is,
“He’s the guy I named the shop after,” and then he’ll lock himself in the
office the rest of the day.

That’s why I’m here on
the floor when I should be up near the register. Of course, when there’s only
one customer, that customer tends to grow in importance
fast
.

“This was owned by Louis
XV?” Mrs. Taber asks.

Every time I talk about
this armoire, I get the same question. Troy’s been telling me
just to say
yes so we can get the thing out of
here.

“No,” I answer. “It’s in
a style named for him, but don’t let that discourage you. From what I hear,
these pieces
are highly prized
.” Of
course, Troy’s the one I heard that from, so who knows?

“Yeah,” she says, opening
one of the doors to the armoire. She says, “I think I saw one in Wal-Mart a
while ago.”

She glances up at me.

Here is
my problem: Honesty’s great, but correcting people is said to be impolite. I’ve
read
How to Win Friends and Influence
People
. I fall asleep to it at night. Still, old Dale Carnegie hasn’t quite
convinced me about everything.

“I could have sworn,”
Mrs. Taber says.

“You may have seen a
reproduction
or something done in the style,
but it’s not authentic,” I tell her. “
This
armoire comes with a certificate of authenticity.
”

“Okay,” she says. “I’m
just looking for an armoire, though. Do I
need
something ‘authentic?’?”

I know
what I’m supposed to say;
Troy’s been over it a thousand times like
the problem is I just didn’t hear him.

“You don’t
need
something authentic, no,” I answer.
“Modern, less expensive armoires will look just as
beautiful
and work just as well. That said, this is a real
conversation piece.”

“In that case, I think
I’ll just keep looking,” she says.

I don’t
know how it is that he always knows, but he does.

Leaving Mrs. Taber, I
make my way to the office doorway, saying, “Yeah?”

I shrug and widen my eyes
to puppy-dog-levels, saying, “Did what?”

He lets out a long sigh,
and for the first
time,
I’m noticing that
there’s a line of flattened hair on the top of his head, going from ear to ear.
“Do you know how long I’ve been trying
to sell
that stupid thing?”

“You have microphones
around the store so you can listen to what I’m telling customers, don’t you?” I
ask.

Tactfulness
has never been my strong suit
.

“
How many times am I going to have to go
over this?” he asks. “
Yes,
the customer needs the armoire. You
can’t find
anything
like it anywhere.
I’m surprised we got one here.”

“Now, just so I’m clear,”
I say, “
Louis XV originally commissioned the
armoire
, but there was a problem with Amazon’s
shipping service,
and so it got sent to his friend, The Duke of
Troy, to sell in his shop in the middle of nowhere, right?”

“People don’t come in for
antiques because they’re cheap; they come here because they can’t find this
stuff anywhere else,” Troy says.

I look behind me at the
barren store. Mrs. Taber must have gone after I left her.

He’s leaning forward as
if he’s expecting me to say more on the topic, but my point finally starts
sinking in. “So your contention is
that
because we don’t get a lot of customers, it’s okay if we lose the few we do
get?”

“That’s not what I’m
saying,” I tell him. “I just don’t think we should try to push expensive stuff
on people we know can’t afford it.”

“How do you know she
couldn’t afford it?” Troy asks.

“First off,” I tell him,
“the armoire is almost two grand. Second,” I continue, “I know Mrs. Taber. She
was my third-grade teacher. Troy, I know you want to think we live in some
large
town where everybody doesn’t already know
everything about everybody else, but—”

The bell above the shop’s
door rings.

“Why don’t you get out
there and see if we can sell something today,” he says. “That’s how businesses
stay open: they sell things.”

“
If you’re not going to bother with what
I’ve asked you to do on the
sales floor, maybe it’d be best if you just sit up front or do some dusting or
something,” he says. “Or are you going to have trouble ringing this guy up if
he wants to buy something?”

With a sigh, I slink from
the office doorway. I wonder who I’m going to strong-arm next.

The shop’s not all
questionable antiques. Pretty much anything you’d imagine would be in a thrift
store, pawn shop,
or
antique
emporium i
s in this shop.

The problem in this town,
Mulholland, is that it’s so small, everyone has a job, but it’s hardly ever a
job they would have wanted. When people here reach the age of eighteen, they
either move away, or they fill out a form with the local job broker, Grant.
That’s what I did.

I’m still not sure if
Grant is the man’s first or last name, but I do know that he’s as good as HR
for every shop,
store,
and company in
Mulholland. Nobody gets a job without his approval because there aren’t any
jobs to be had.

I guess he’s the only one
who knows where to put people where they’ll do the least amount of damage.

When someone like me does
the stupid thing and decides to stick around Mulholland after graduating high
school, Grant’s got to look for somewhere to put them. So, here I am.

If I didn’t live
in
the village proper, I wouldn’t have been
able to get anything in town at all. I guess I should feel lucky or proud or
something, but Troy and I have never seen eye-to-eye when it comes to sales or
business strategy or advertising or ethics.

I don’t know that we’ve
ever agreed on anything, now that I think about it.

Grabbing the feather
duster Naomi, my sister, got me on my eighteenth birthday as a gag gift, I set
about prettying up the shop. I’m not going to lie to this
guy,
and Troy’s going to get after me again if
I go up to the man and start telling him the truth, so I just keep my distance.

After a while, though, I
come to about where the man is standing, only the next aisle
over,
and I can’t help but say
something.
“Are you looking for anything
particular today, or just browsing?” I ask.

“Actually,” the man says,
keeping his back to me, “I was hoping you could help me.”

“I’m looking for a few
things,” he says. “First, I wanted to see if you had anything Fabergé.”

I hate it when this
happens.
It’s only ever happened a couple of
times since
I’ve been here, but this guy seems like someone with an
interest in actual antiques.

“I haven’t seen anything
like that around, but let me
check
with
my boss,” I say.

Troy
will
never forgive me if I let a big fish out
of the shop without telling him.

“
I was holding out some vague hope that you might be able to help
me,” the man says.

“I’d be happy to,” I say,
“but I really should check with my boss on the Fabergé. If we have anything
like that, he’d—”

“You don’t have any
Fabergé,” he says. “That’s fine, though. I’ve always found his pieces to be
frightfully pretentious, though I will admit to having coveted more than one of
them in the past. Unfortunately, those pieces are not for sale.”

What
this guy’s doing, it isn’t
about antiques. This guy just wants
me to know that he has money and a lot of it. More likely, he just wants me to
think
he has a lot of money.

A real-life
connoisseur
coming in here is a special
occasion: It’s
only happened
a couple of
times. Some random guy walking in here with a bloated ego, saying he might buy
something here if there was anything “expensive enough” for him: that happens
in here at least
once a month
.

I’ve never known anyone
like that to buy anything. They’re the type who love the mini-prestige that
comes from convincing someone
that he’s got more
money than the Pope
. They’re the ones that’ll buy a beaten down, used
and abused Porche body, have some guy put a lawnmower engine in it, and tell
everyone how much he loves taking it on “
ze
Autobahn.”

“Okay,”
I say, trying to hide the annoyed tension from my voice. “Is there something
that you
were
looking for?”

“Yeah,”
he says. “I was hoping I might get your number and take you out to dinner
sometime.”

I lean a
little to one side, trying to see the man’s face. It’s probably Mr. Simpkins
again. He’s been in here to ask me out on a date at least once a week since I
started here. If the man ever bought anything, he’d be our best customer.

Mr.
Simpkins is a nice enough man; I just prefer dating a little closer to my age
range. At sixty-four, Mr. Simpkins is a bit—what’s the nice way to say
it?—mature for me.

“Mr.
Simpkins, I appreciate the disguise and all, but I just don’t think you and I
would have anything in common,” I say.

“I take
it this Mr. Simpkins is my competition,” the man says.

The man
turns around, but it’s not Mr. Simpkins. The man’s looking at me, but I don’t
have any words.

The
man’s tall, probably 5’10” or thereabouts. His short, dark, immaculately
groomed hair provides the perfect compliment to his tan skin and dark brown
eyes, and yeah: I recognize him all right.

The next
thing I know, I’m on the floor, and the man is crouched over me, saying
something my addled brain can’t even begin to decipher.

“You’re
Nikolai Scipio,” I mutter when I finally find my voice.

The Dead in Their Vaulted Arches by Alan Bradley
Crave by Ayden K. Morgen
Love On The Brazos by Carlton, Susan Leigh
He Shall Thunder in the Sky by Elizabeth Peters
The Cowboy's Surprise Baby (Cowboy Country Book 3) by Deb Kastner
The Woman who Loved an Octopus and other Saint's Tales by Imogen Rhia Herrad
The Pirate's Jewel by Howe, Cheryl
He Belongs With Me by Sarah Darlington
Grist 04 - Incinerator by Hallinan, Timothy
Owning Corey by Maris Black
Our partner