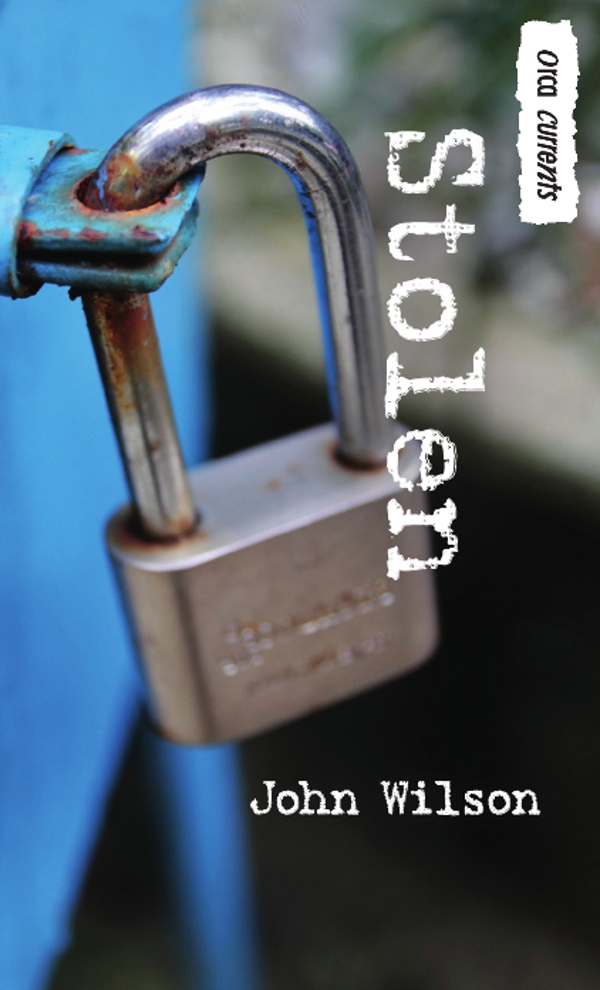 Summary:
Fifteen-year-old Sam solves a mystery while treasure hunting on the Australian coast.

Warrnambool! What kind of name is that for a place? And what am I doing here?

Well, I know the answer to the second question. I'm here because of DadâMom and Dad, really. If Mom hadn't decided to change her name to Acacia and go searching for the space to “find herself,” my parents wouldn't have split up. Dad wouldn't have accepted a job in Australia, and I'd be back struggling through grade eleven at Dover Bay Secondary.

Not that that would be a bunch of fun. It'd be a gray, rainy January on Vancouver Island, and I'd be fighting to pull myself up to a B in math while trying to handle all the usual garbage that being sixteen in a big high school throws at you. But I'd be with my friends. I'm not a real outgoing person. It takes me a long time to build up a few good friends. Now they're at the other end of the earth, and I'm walking along a beach at Warrnambool, worrying about starting at a fancy private school in Adelaide in a couple of weeksâwe have to wear uniforms! And I'll have to begin the find-friends routine all over again. At least it's not cold and rainy hereâthe weatherman's calling for thirty-eight degrees this afternoon. But hot weather doesn't do anything for loneliness.

I kick an old piece of black driftwood ahead of me. I'm walking along the edge of a line of grass-covered sand dunes. To my left, the featureless beach stretches down to where the ocean waves roll in, foaming and crashing as if angry that they can't climb higher toward me. Beyond that, there's nothing until you reach Antarctica. At least there's somewhere more boring than Warrnambool.

I catch up with the piece of driftwood and give it another kick. That's when I hear the countingâ“3.141592653589793â¦” Well, it's not really counting, because the numbers aren't in any sequence I can spot.

I look around. The voice must be coming from behind the dunes. As far as I can see in either direction along the beach, there's only one old guy and his dog. Neither of them is counting.

I stumble through the soft sand up the dune face. Normally, I wouldn't go looking for someone talking to themselves, but the numbers are so weird. They're still going on and making no more senseâ“â¦238462643383279â¦”

At the top of the dune, I see the girl. She's not tough to spot. Bright red hair like hers would stand out a mile away. She's sitting cross-legged in the hollow between my dune and the next one. She is wearing green cargo pants and a loose, long-sleeved khaki shirt. There's a tattered blue backpack beside her. Her eyes are closed and she is still listing numbersâ“â¦5028841971â¦” Have I stumbled upon a lunatic escaped from a local asylum? Maybe she's part of a coven, and she's chanting a mystical formula to raise the devil. I'm about to return to the beach when the girl stops counting, opens her eyes and stares up at me.

“Hello,” she says, without a hint of embarrassment.

“Hello,” I reply. Then my throat and brain dry up. Like I said, I'm not an outgoing person. Fortunately, the girl is.

“I was just sitting here reciting Pi,” she says, standing, brushing sand off her pants and picking up her backpack.

“Sure,” she says, coming up the dune toward me. “You knowâPi, the basis of everything.”

The girl smiles, and I feel my cheeks flush. “My name's Annabel.” She arrives at my side and holds out a hand.

I shake it. “I'm Sam.” Up close, she is striking. Her hair falls straight halfway down her back and almost glows in the low sun. Her eyes are an odd gray color and stare at me confidently. Her mouth curls up on one side, making it look as if she is permanently amused by something. She's a good four inches taller than me, and I'm only a couple of inches under six feet.

Like a mouse mesmerized by a snake, I stare up at her until she looks down, and I realize I'm still holding her hand. I drop it hurriedly and mumble, “Why were you saying Pi out loud?”

“Because it's cool. Do you want to hear me recite it?”

“That's impressive,” I say, interrupting the flow that sounds as if it could go on all day.

Annabel opens her eyes. “I can keep going,” she offers.

“That's okay. How many digits have you learned?”

“I'm up to three thousand two hundred and thirty.”

“Wow,” I say, partly in awe and partly in realization that my guess about an escapee from a lunatic asylum was correct. “That's a lot of numbers.”

“It's my party trick.” She laughs out loud. “I don't go to many parties. Actually, it's not a lot of digits. The world record for memorizing Pi is over a hundred thousand.”

I frown, trying to imagine someone wanting to memorize that many numbers.

“I don't think I'll ever manage that,” Annabel says. “My dream is to have Pi tattooed on my arm.” She holds out an incredibly long right arm and stares at it. “In a spiral.” She twists her left hand in a sinuous motion down the length of the arm. “I reckon I could get several thousand numbers on there. Don't you?”

“I guess so,” I say, wondering if I should turn and run for it.

“You're new here,” she says, dropping her arm and turning those gray eyes on me. All thoughts of running vanish.

“Yeah,” I reply. “My dad's working in Adelaide, so he thought it would be a good idea to drive down here for a holiday for a few days.”

“The beach is okay,” I say defensively, “but there's nothing to do. The town's boring.”

“Have you been up Flagstaff Hill?”

“Why would I want to see a flagstaff?” “There's a museum there. This stretch of coast is called the Shipwreck Coast. Dozens of ships have sunk along here.” She waves an arm expansively to take in the entire coast and ocean.

“The museum has all kinds of cool stuff salvaged from wrecks.”

“Boring old stuff!” she says. “You just dismissed all of history. You think people who lived in the past weren't as interesting as you? They were certainly smarter.” Annabel strides off down the sand dune.

The dramatic effect of Annabel's departure is spoiled by the sand dune. Her feet sink and slide into the soft sand, and she waves her arms around wildly for balance.

“Wait,” I shout, not wanting the only interesting person I've met here to escape, even if she is insane. “I'm sorry. I like history. Socials is my favorite subjectâat least, the bits about battles and rebellions.” I manage to stop before saying that math is my least favorite subjectânot a smart thing to say to someone who loves Pi.

Annabel stops on the flat part of the beach and waits while I slither down the slope. “You really think history's interesting?” she asks.

“I work there on the holidays. I could show you round.” We start walking back along the beach. “There's lots of great stories about the coast here. The museum has the
Loch Ard
peacock,” Annabel says as if I should know what she's talking about.

“It's part of the
Loch Ard
shipwreck. Fifty-two people drowned back in 1878.”

“I'm afraid it wasn't big news up in Canada. Do you know about the
Princess Sophia
shipwreck? Three hundred and forty-three people drowned back in 1918.” I'm dredging up information from a project I did last year. I know I sound pompous, but Annabel's assumption that I should know the history of her backwoods part of the world annoys me.

To my great relief, Annabel laughs. “Fair enough. Tell me about the
Princess
Sophia
.”

“She was a steamer out on Canada's west coast. She struck a reef in a storm and sank.” Annabel looks at me as if she wants more information. “The
Sophia
sat on the reef for two days with rescue ships around her and the weather too rough to take the passengers off. Then she slid off the reef, and everyone drowned. I imagine what it must have been like for the people on board, knowing they were probably going to die but not knowing when. Some wrote last letters and wills that were found when their bodies drifted ashore days later.”

Annabel tilts her head and looks at me with interest. “That's powerful stuff. A lot of people forget that history's about people just like us. You haven't.”

I feel my neck redden at the compliment. “So tell me about the
Loch Ard
,” I say.

“The
Loch Ard
was heading for Melbourne from England with immigrant families aboard. She was swept onto the cliffs along the coast in fog and sank in ten minutes. Only two eighteen-year-olds survived, Tom Pearce, an apprentice, and Eva Carmichael, the daughter of one of the families. Tom was washed ashore, but he heard Eva call for help and swam back out to rescue her. They sheltered in a cave and drank brandy that had washed up. Then Tom climbed the cliffs and went for help. It was a huge story back then. Everyone hoped Tom and Eva would fall in love. They didn't. Eva went back to Ireland, and Tom was given a gold medal for his bravery. So much for romance.

The Rule of Thoughts by James Dashner
Mother of Prevention by Lori Copeland
Love's Protector: A Maverick's Shield Novel by Chloe, Charisma
The Fortune Quilt by Lani Diane Rich
Fields Of Gold by Marie Bostwick
Cherry Popper (The Reckless Series Book 1) by Jade Sinner
Death in a Promised Land by Scott Ellsworth
Always His (Crazed Devotion #1) by C.A. Harms
Close Encounters by Jen Michalski
The Not So Invisible Woman by Suzanne Portnoy
Our partner