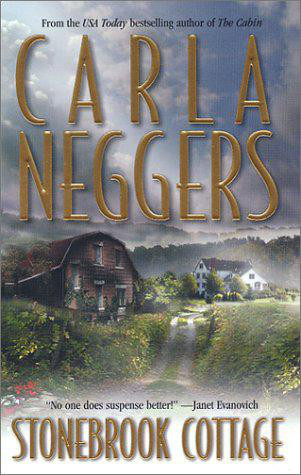 Praise for the novels of

"Neggers's characteristically brisk pacing and colorful characterizations sweep the reader toward a dramatic and ultimately satisfying denouement." —
Publishers Weekly
on
The Cabin

"Tension-filled story line that grips the audience from start to finish." —
Midwest Book Review
on
The Waterfall

"Carla Neggers is one of the most distinctive, talented writers of our genre." —Debbie Macomber

"A well-defined, well-told story combines with well-written characters to make this an exciting read. Readers will enjoy it from beginning to end." —
Romantic Times
on
The Waterfall

"Gathers steam as its tantalizing mysteries explode into a thrilling climax." —
Publishers Weekly
on
Kiss the Moon

Watch for CARLA NEGGERS'S next novel of romantic suspense

Special thanks to Christine Wenger (again!), Fran Garfunkel and her lawyer friends, my lawyer friends and Zita Christian, for their expertise and willingness to dig for answers…and to all my friends in Connecticut—Zita, Leslie O'Grady, Liz Aleshire, Linda Harmon, Bea Sheftel, Mel and Dorothy and CTRWA gang, for reminding me that the beauty of your state isn't just the lay of its land, but also its people.

Closer to home, many thanks to Paul and Andrea for helping me keep in shape—okay,
get
in shape!

Amy, Dianne, Tania, Jennifer, Meg—what a year it's been! Thanks for everything!

Sam and Kara's story was great fun to do. I love hearing from readers. I hope you'll visit me at www.carlaneggers.com or write to me at P.O. Box 826, Quechee, VT 05059.

This one's for you, Joe

B
ig Mike Parisi was the first-term governor of Connecticut and a dead man. He knew it even before he hit the water.

He couldn't swim, an embarrassment not a half-dozen people knew.

His big, tough body belly-flopped into the water of his elegant pool and dropped hard and deep, hitting the blue-painted bottom that so beautifully reflected the summer sky. He managed to push up off the bottom and out of the water and yell for help.

No help would come. His voice barely rose above the gurgling fountain halfway down the classic, kidney-shaped pool. His own damn fault. He'd refused to let his state trooper bodyguards out back with him.
If I get stung by a bee, I'll yell bloody murder. You'll hear me. What the hell else could happen?

Someone could try to kill him.

He'd rented a house for the summer in Bluefield, a picturesque town in northwest Connecticut. Stockwell country. People assumed he wanted to be close to his lieutenant governor, Allyson Lourdes Stockwell, so they could strategize. The truth was, he was worried about her. Allyson had problems. Big problems.

Hadn't occurred to Big Mike to worry about himself.

As he splashed and kicked, he saw the bluebird that he'd been trying to save. It was barely alive, soaked in the chlorinated water, slowly being sucked toward the pool filter.

They were both doomed, him and the bluebird. It was a juvenile, its feathers still speckled. It looked as if it had a broken leg. It couldn't have been in the water long.

Clever. His death would look like an accident.
Michael Joseph Parisi drowned this afternoon in his swimming pool apparently while trying to rescue an injured bluebird…

Some murdering son of a bitch had dumped the bird in the deep end, knowing he'd bend over and try to scoop it up. Bluebirds were his hobby, his passion since his wife died six years ago. They'd had no children. His desire to help restore the Eastern bluebird population in Connecticut and his personal interest in bluebirds weren't a secret.

His mother had regularly dumped his ass in the lake as a kid, trying to get him to learn. It didn't work. She'd had to get his brother to fish him out.

Was the bastard who'd planted the bluebird watching him flail and yell?

Rage consumed him, forced him up out of the water, yelling, swearing, pushing for the edge of the pool. It was so damn close. Why couldn't he reach it? What the hell was he doing wrong? He could hear his mother yelling at him.
Jesus, Mary and Joseph, Michael, you're such a wienie. Swim, for the love of God.

These days a mother like Marianne Parisi would be arrested for child abuse or put on pills or something. Total nutcase, his mother was, though she meant well. She died of a stroke when Mike was twenty-four, still thinking her second son would never amount to shit.

The pool water filled his nose and mouth, burned his eyes. He coughed, choking, taking in even more water. He couldn't breathe.

There'd be a lot of crocodile tears at his funeral.

Allyson would do fine as governor…

Who the hell was he kidding? Allyson had her head in the sand. He'd tried to help her, and he knew that was why he was drowning now.

They'd have to cut him open. They'd find out he hadn't hit his head or had a heart attack or a stroke. He'd
drowned.
The autopsy wouldn't pick up where he'd been poked in the ass. It'd felt like a stick or a pole or something. The pool was fenced in, but the deep end backed up to the woods. His murderer could have hid there and waited for Mike to come outside, then tossed in the bluebird when he had his back turned.

Easier to shoot him, but that wouldn't have looked like an accident.

The faces of the living and the dead jumbled together in his head, and he couldn't distinguish which was which, couldn't tell which he was. Thoughts and memories, sounds came at him in a whirl. He could see bluebirds all around him, dozens of them, iridescent in the sunlight.

But all of that was done now.

He prayed the way he'd learned in catechism class so long ago.

Hail Mary, full of grace, the Lord is with thee…

His mother came into the bright light now, shaking her head, not with disgust this time, but with love and bemusement, as if she hadn't expected him so soon. His wife was there, too, smiling as she had on their wedding day thirty years ago.

They held out their hands, and Big Mike laughed and walked toward his wife and his mother, and the bluebirds, into the light.

A
ustin was in the grip of its fifteenth consecutive day of ninety-plus-degree weather, a quality of Texas summers Kara Galway had almost forgotten about during her years up north. Even with air-conditioning, she was aware of the blistering temperatures and blamed the heat for her faint nausea. The heat and the seafood tacos she'd had for lunch.

Not
Sam Temple. He was another possibility for her queasy stomach, but not one she wanted to consider.

She'd been putting in long hours since Big Mike's death two weeks ago, but memories of their long friendship would sneak up on her no matter how deep she buried herself in her legal work. Kara had met him through her friend Allyson Lourdes Stockwell, now the governor of Connecticut. She and Kara had gone to law school together, before Allyson's husband died of cancer and left her with two toddlers to raise on her own.

Henry and Lillian Stockwell were twelve and eleven now. After Big Mike's funeral, they'd flown back to Texas with Kara, and she'd dropped them off at a kids' dude ranch southwest of Austin, a long-planned adventure that Allyson had decided not to cancel, despite the trauma of Mike Parisi's death. Henry and Lillian had loved him, too. Everyone had.

The kids wrote to Kara, who was their godmother, from the ranch, complaining about the food, the heat, the bugs, the snakes. They never mentioned Big Mike.

Kara tried not to think about him, or his funeral. How he'd died. The Connecticut state police and the state's chief attorney's office were conducting a joint investigation. But none of that was her concern. All she should concentrate on were Henry and Lillian, who would be spending a few days with her after their dude ranch experience, then flying back to Connecticut to enjoy the last of summer and get ready for school.

Seeing them would be a welcome distraction.

George Carter stopped in the open doorway to her office and peered at her. "You sick?"

Kara focused on her boss. "I think I had bad seafood tacos at lunch."

He winced. "There's no such thing as a good seafood taco."

At sixty-two, George Carter was a man of strong opinions, a prominent and respected attorney in Austin, a founding partner of Carter, Smith and Rodriguez, Af-rican-American, straightforward, brilliant, father of three, grandfather of two. He was also one of Kara's biggest doubters. He made no secret of it. He said he liked her fine and didn't hold her Yale education or her years as an attorney in Connecticut against her. He'd never even asked her about her Texas Ranger brother. His doubts weren't personal. George was a buttoned-down lawyer who fought hard and played by the rules, and Kara was an out-of-the-box thinker, someone who came at problems sideways by nature, training and experience. She liked to get a fix on the complexities of a problem, understand every angle, every approach, before committing herself to a strategy. In other words, the two of them were polar opposites.