Stop the Next War Now 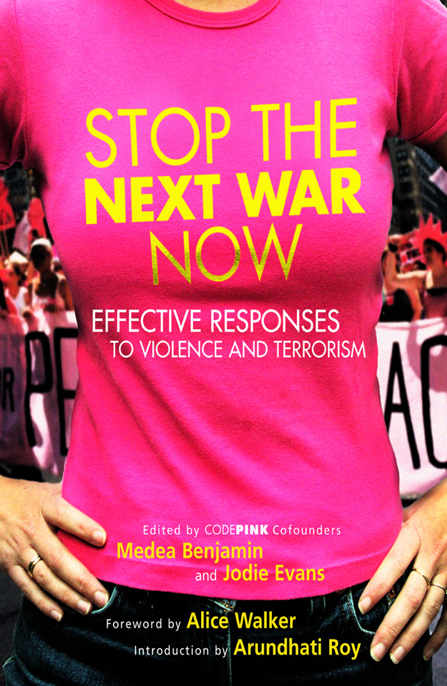 TO VIOLENCE AND TERRORISM

© 2005 by Medea Benjamin and Jodie Evans

All rights reserved. No part of this book may be reproduced by any means or in any form whatsoever without written permission from the publisher.

on the peace movement.

Printed in the United States of America on recycled paper

For information on promotions, bulk purchases, premiums, or educational use, please contact: 866.731.2216 or [email protected]

Dedicated to all the peacemakers of the world

PART I:
A PASSION FOR PEACE

CHAPTER 1. IT STARTS WITH ONE VOICE

From Cindy to George •
Cindy Sheehan

We Must Separate the Warrior from the War •
Patricia Foulkrod

The New Paradigm We Hold Within •
Eve Ensler

The Challenge of Educating for Peace •
Joan Almon

The Mind Can Be a Prison or a Door •
Susan Griffin

A Life in the Movement:
An Interview with Frida Berrigan by Medea Benjamin

The Patience to Win •
Eisha Mason

The Art of Misbehavin’ •
Diane Wilson

Mothers of All the World’s Children •
Beth Osnes

We Refuse to Be Enemies •
Sumaya Farhat-Naser and Gila Svirsky

The Pillars of Peace •
Shirin Ebadi

A Letter to My Imaginary American Friend •
Jasmina Tesanovic

What We Expect from America •
Mary Robinson

PART II:
A CHALLENGE TO THE SUPPORT STRUCTURE OF WAR AND VIOLENCE

The Guards Are Sleeping:
An Interview with Helen Thomas by Gael Murphy

Heading into the Cave with a Torch •
Katrina vanden Heuvel

The Power of Dissent •
Amy Goodman

Be the Media •
Andrea Buffa

On Not Passing the Buck •
Patricia Scott Schroeder

Get smart: A Better Response to Terrorism •
Lynn Woolsey

A World Working Together •
Jody Williams

Ending the Nuclear Crisis: A Prescription for Survival •
Helen Caldicott

Colonizing the Globe, One Base at a Time •
Joseph Gerson

Lessons from the Field: Igniting the Spirit of Joy •
Alli Chagi-Starr

To the Next Generation of Peacemakers •
Adrienne Maree Brown

The Opportunity of Imprisonment •
Sharon Salzberg

TO BE LED BY HAPPINESS

It started with Einstein. I had written a poem about his hair. It wasn’t just about his hair: I was thinking about his statement that World War III might be fought with nuclear weapons but World War IV would be fought with sticks and stones. I was walking down a gray, chilly street near my home in Berkeley, thinking about the sadness of his eyes, the sadness of our situation: about to invade and massively bomb Iraq, a country inhabited by old people, orphans, women and children. Boys and men. The children, half the country’s population, under fifteen years of age. I was thinking about my impending journey to Washington, D.C., to join a demonstration against the war; a city whose streets, during slavery, were laid out by Benjamin Bennaker, a free African American (father African, mother Irish African) tobacco planter from Maryland. I thought of the ancestors who, enslaved, built (eyes lowered, muscles straining) the imposing symbols of freedom in Washington, including the White House.

Though I did want to join the women of codepink who had been holding a vigil in front of the White House for four months, dressed in pink to signify the feminine concern for the safety, especially, of children, I was dreading the long lines at the airport, and the flight. I stopped at a light, thinking of how our experience now at airports, being searched and sometimes seized, bears a resemblance worth scrutinizing to what Palestinians, attempting to enter and leave their Israeli-restricted areas, go through. Reflecting on this I rested my hand on a telephone pole before rather wearily crossing the street. A piece of paper near my hand fluttered in the wind. There, just above my head, was another famous quotation from Einstein someone had stapled to the pole: “The problems we face today cannot be solved by the minds that created them.”

It was a pretty grim message, perhaps grimmer than the earlier one; still, I found myself beginning to smile. Here he was: an ancestor who knew, and said out loud, that if we keep going in the direction we’re headed, the jig is up. By the time I reached the other side of the street I was thinking, “Whose mind has not been heard at all on this question?” The Mind of the Grandmothers of the World. But that’s another story.

Ten thousand women dressed in hot pink, cool pink, all shades of pink, marched and rallied in Washington to celebrate March 8, International Women’s Day 2003. There were rousing speeches; there was music and dance. Enormous and magical puppets. There was laughter and solemnity. The march was led by several rows of small children chanting, “One Two Three Four, We Don’t Want Your Crummy War. Five Six Seven Eight, We Will Not Participate.” They were followed by writers and artists and activists, including Rachel Bagby, Medea Benjamin, Susan Griffin, Maxine Hong Kingston, Nina Utne, Terry Tempest Williams, and me. Behind us the sea of pink stretched as far as the eye could see.

At the edge of Lafayette Park, across from the White House, we paused. We chose twenty-five of us to enter the park (the number of demonstrators that had been allowed to enter the park for months before) only to find we were denied admittance. After a brief huddle, squatting at the knees of a line of police, we moved past the barricade. We were arrested several hours later, having sung “Peace Salaam Shalom” and “All We Are Saying . . .” the entire time. And it is of that time, those several hours because it took a long time to be arrested, put in holding cells, and then booked, that I wish to speak.

I had been arrested before. While protesting apartheid in South Africa; while attempting to block the shipment of weapons, by train, to Central America. Those were serious times too, but this time felt different. This time felt like: All the information is in. If our species does not outgrow its tendency to fight wars, we can kiss all we have created, and ourselves, good-bye. To bring children into the world at all, given the state of things, seems not only self-indulgent but cruel. And it was of the children I thought, partly because there, right across from us, as we sang in front of the White House, were huge photographs of dismembered fetuses held by an antiabortion group whose leader began to harangue us through a bullhorn. He called us traitors and murderers and accused us of nagging.

Nagging. “What century is he from?” I asked myself. That he could not make the connection between the gruesomely dismembered bodies in his photographs and those of children bombed in Iraq seemed unbelievable to all of us. As he shouted at us we sang, “Protect the women and the children of Iraq,” until eventually, scowling and looking extremely churlish, he left.

Standing between my Irish American sister (Susan Griffin) and my Chinese American one (Maxine Hong Kingston), and with twenty-two other courageous women all around us—as Amy Goodman of
Democracy Now
! interviewed us for our communities across the world, and Kristin Michaels made a videotape—I felt the sweetest of all feelings: peace. The police began to gather their horses, their paddy wagons, their plastic handcuffs. We sang. Being women, we noticed and made much of the fact that a rainbow appeared suddenly in the sky.