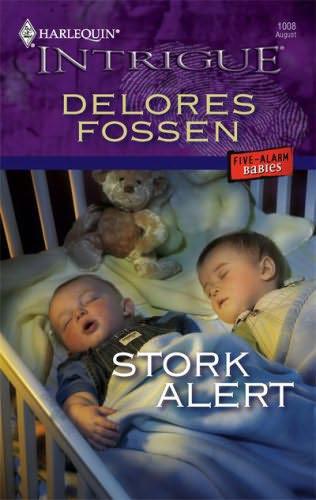 To Minette. This one’s for you.

Kelly Manning checked to make sure no one was following her. No one was. She was alone in the dimly lit hallway.

Too bad her pounding heart and racing breath didn’t quite grasp that she was close to succeeding. A minute, maybe less, and she’d have what she needed and would be away from Nick Lattimer’s ranch.

Of course, this could be just the beginning. Not exactly a comforting thought, but she would cross that bridge
if
she came to it. However, it was impossible to push aside the thought that the next few minutes could change her life forever.

She eased open the door to the nursery and ducked inside. The nanny was in the kitchen indulging in a late-night snack, so other than the baby, the suite would be empty. Timing was indeed everything. If any of the half-dozen or so “security guards” and household staff caught her, they would no doubt alert their boss.

Kelly hurried across the room to the crib. The baby was there. Sleeping. He was tucked beneath a blue satin-rimmed blanket. All she could see of him was the mop of blondish-brown hair, but with just that bit of visual info, she had to fight to hold on to her breath. Now wasn’t the time to let her emotions get in the way of what she had to do.

With her hands trembling, she reached for the small vial she’d hidden in her bra. But reaching for it was as far as she got.

“Mind telling me what you’re doing here?” she heard someone ask.

The sound shot through her entire body, and Kelly gasped. She didn’t recognize the voice, but she had no doubt that it belonged to Nick Lattimer, the lord of the massive Texas ranch she was trespassing on. And he was the last person on earth she wanted to come face-to-face with tonight.

Dreading what she would see, Kelly angled her eyes in the direction of his voice. He was in the shadows, his shoulder resting against the doorjamb of the adjoining room. His head was slightly tilted to the side. Studying her. He wore a tux and a formidable take-no-prisoners expression.

“I was looking for the ladies’room,” she managed to say. She’d practiced it enough that thankfully her voice didn’t crack.

He pushed away from the doorjamb, a slick effortless move, and he started toward her. A pair of delicate angel night-lights illuminated his way. Ironic, since there was nothing angelic or delicate about him.

His midnight-black hair fell long and fashionably untamed against his neck. Dark, brooding eyes. Chiseled jaw. High cheekbones that hinted of Native American blood. He was handsome by anyone’s standards.

Including hers, much to her disgust.

But his looks didn’t make him less dangerous. From all accounts, he was an ends-justifies-the-means sort of man.
Any means.

“The caterer and party staff were instructed to use the downstairs facilities,” he informed her.

Kelly nodded. “I’m sorry, sir. I didn’t know that.” She turned to walk away.

Nick Lattimer shifted to the side and blocked her exit. He didn’t stop there. He blocked her a second time when she tried to go around him. Then he circled her. Slowly. Like a hungry jungle cat stalking his prey.

Outside the window, lightning stabbed across the sky, quickly followed by thunder. The November storm only added to the menacing energy simmering around him.

“I wasn’t joking about having to go to the ladies’ room.” Kelly tried to keep her tone light. She failed. Her heart was beating so hard and fast that she thought her ribs might crack.

He was behind her when she heard the whisper-soft sound. She might not have even known what it was. But she was a cop’s widow.

It’d been a serious mistake coming here, but it was too late to turn back.

She got a good look at the weapon as he finished circling her and came to a standstill directly in front of her. Yes, it was definitely a gun. An expensive, high-powered Glock. Not an amateur’s weapon of choice. It was too much to hope that he didn’t know how to use it.

Her stomach tightened into a cold, hard knot.

Kelly forced herself not to panic. The stakes were too high for her to lose it. “Listen, I’ve obviously upset you by being here. It won’t happen again.”

“I don’t doubt that. Only a handful of people have ever managed to upset me more than once.” His narrowed gaze slid over her. “Who sent you?”

She’d anticipated a lot of questions. But not that one. Kelly shook her head. “What do you mean?”

Okay. It was clear from his sarcastic tone that he had his own issues and wouldn’t let her just walk out. It was time to show a little backbone.

She hiked up her chin. “I understood what you said, but I thought the answer was obvious. I work for the caterer you hired for your dinner party.” She pointed to her clothes. “You didn’t think I was wearing this tacky polyester uniform to make a fashion statement, did you?”

“No. But it did occur to me that you were wearing it so you could gain access to my home. And to this particular room.”

Without taking his lethal gaze off her, he reached out, snagged her by the shoulder and pushed her against the wall. Her right cheek landed next to a cheery cherub mural.

Other than a startled sound of protest, Kelly didn’t have time to react before his left hand was on her. Moving across her back. To her sides. And her stomach. She battled with her instincts to fight back. But this wasn’t a fight she could win. Not with his size and that Glock. Maybe once he realized she wasn’t armed, he’d back off. Of course, he might find the vial. Even so, he likely wouldn’t know what it was.

“So, is this how you treat your hired help?” Kelly snarled.

“It is when I find them in places they shouldn’t be.”

That searching hand went lower, to the stretchy waist of her dark-blue skirt. And even lower. He slid his palm along the outside of her legs. Then, the inside.

All the way up.

When his fingers made it to the lower front of her panties, Kelly grabbed his wrist and clamped onto his hand. Too bad she hadn’t opted to wear her sturdy cotton underwear. Or her big-girl panties, as her grandmother used to call them. Instead, she had a little swatch of silk and lace that allowed her to feel every inch of his touch.

A touch she didn’t want to feel.

She glared at him over her shoulder. “This isn’t necessary.”

Kelly had stopped his search in her panty region. Not the best idea she had ever had. Maybe it was her grip on his wrist, or maybe he was just a jerk—either way, he kept his hand there.

“Look, if this is your idea of foreplay—”

“It isn’t.” He threw off her grip and resumed his search. “Trust me, if it were foreplay, at least one of us would be enjoying it.”

Apparently finished with the zinging smart-aleck comebacks and the search of her midsection, he caught on to her shoulder and whirled her around to face him. Kelly had to look up to meet him eye to eye. She was five-six, and he had a good seven inches on her. Plus, there was the weight difference. He outsized her by sixty pounds or more.

All muscle, no doubt.

He didn’t look like the excessive-body-fat type. His size and strength would be a definite liability if she had to fight her way out of there.

Unfortunately, she might not have a choice about that.

“Were you trying to kidnap the baby?” Lattimer demanded.

That didn’t do much to ease the knot in her stomach. Whatever she’d been expecting him to say, that wasn’t it. “No! Absolutely not.”

“Good. Because you would have failed.” He tucked his gun inside a holster hidden beneath his jacket, reached over and threw back the blanket.

Stunned with his abrupt movement and with the fact that the baby didn’t react to that movement, Kelly glanced in the crib. She didn’t need the overhead light to realize it wasn’t a baby but a doll.

All of this had been for nothing.

“Listen carefully,” Lattimer continued, speaking through nearly clenched teeth. He also got right in her face. “I don’t tolerate thieves, even when they pose as polyester-wearing employees. I’m especially not fond of money-hungry opportunists like you who try to come in here and kidnap a child. No repeats of what happened to the Lindbergh baby. Understand?”

Somehow, Kelly managed to find enough breath to speak. “I’m not a kidnapper.” This time, all the rehearsal in the world couldn’t have stopped her voice from trembling. “I was just looking for the bathroom.”

That repeated denial obviously didn’t please him. His eyes, those dark dangerous gray eyes, narrowed to slits. He grabbed a fistful of her blouse, and without taking his gaze from hers, he reached inside. To her bra. It only took him a second before he retrieved the thin plastic vial.

Judas Priest. He must have seen her reach for it earlier.

“Did you plan to drug the baby?” he asked.

Lattimer didn’t give her a chance to flat-out deny it. He opened it and extracted the swab that was enclosed in a clear plastic vial. He brought it to his nose. And sniffed it. Kelly knew for a fact there was nothing to smell because the swab was sterile.

She took a deep breath and prayed he’d buy the lie she was about to tell him—especially since he obviously hadn’t believed anything else she’d had to say. “My doctor thought I might have strep.” Kelly purposely coughed on him and didn’t cover her mouth, hoping it would spur him to let her leave. “I’m supposed to swab my throat and drop it off at his office.”

He stared at it. A moment. Before he cursed under his breath. “It’s not for strep. It’s for a DNA test.”

Nick Lattimer groaned, a feral sound rumbling deep from within his chest, and he launched the vial into the massive fireplace on the other side of the room. The plastic shattered when it hit the stone-lined hearth. “Who the hell sent you here?”

She barely got out a denying shake of her head before Lattimer latched on to her again. He put her back against the wall. Not nicely, either. He meant business.

“My ward, William, doesn’t need another DNA test,” he insisted. “Let me spell this out for you.” He flicked on the overhead light and shoved his hands against the wall, imprisoning her. He leaned in, so close that she could see the swirls of gray and flecks of steel blue in his eyes. “William is not my biological child, and I have no plans to adopt him.”

Kelly had suspected the first part.

She’d prayed for the second part to be true.

“William’s
really
not your son?” she asked, desperate for him to confirm it.

“No.” Lattimer mumbled something else under his breath. “I thought maybe once…but that doesn’t matter. Not now. His mother is dead. He has no one else but me to raise him.”

So, there it was. All laid out for her. The only thing missing was the proverbial silver platter.

“But I think William does have someone else to raise him,” she whispered.

Something flickered in those icy blue-gray eyes. Surprise, maybe. Maybe something more. “Care to explain what you mean by that?”

Kelly nodded. “His mother’s not dead.” And because it was necessary, Kelly paused to clear her throat. “William is my son.”