Read Strangers in the Night Online

Strangers in the Night 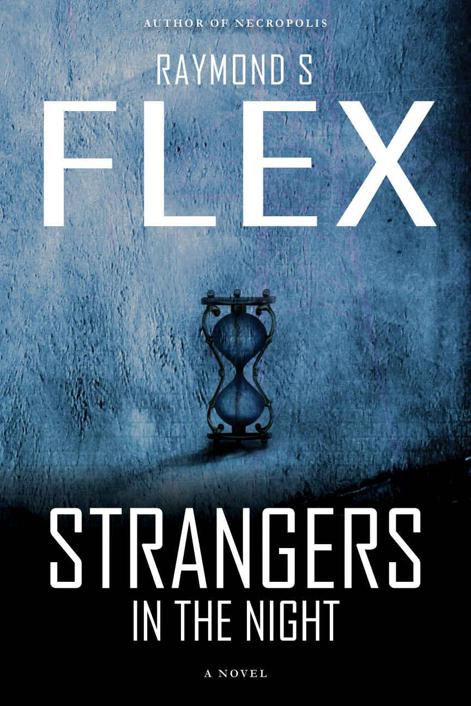 The night air played tricks with the eyes.

And the darkness layered in over everything.

In the near distance, he could hear the sound of the string quartet. Its harmonies, though, standing here on the marble balcony, came and went in waves. Just tiny, little snatches of song.

Nothing at all to dig an ear into.

He clung to his chilly flute of champagne, still feeling the bitter tingle of the bubbles on his tongue from his most recent taste. He could smell the rose garden down below, unseen, but still there, and, further off, he could hear the
hum
of the motorway.

Quite a lot of traffic tonight.

He leaned over the wall of the balcony, making sure there was no bird excrement before he propped up his tuxedoed elbow on the marble.

He stared out into the darkness of the garden; glad, in a way, that unlike all the other large country homes he had visited for some party or other there were none of those floodlights.

No floodlights to render the trellises, the carefully pruned gravelled garden paths, the iced-over ponds, as some never-ending, nightmare museum piece.

He could feel her.

Standing in the opening of the French doors.

If he was only to turn around, he would see her.

And she would see him.

M
itts could hear
the rain water dripping down his bedroom’s ventilation hatch. He heard it drum into the stainless-steel guttering system, collect for maybe a minute or so, and then slide, in one single pool, all the way along and down to the dirt ground outside.

With a distant, but profound, metal-intoned
splash
.

It wasn’t the rain that had woken him.

It was something else.

At the back of his throat, Mitts could still taste the processed tomatoes from the sauce his father had served for dinner that evening. When he breathed in, he caught the scent of the sauce still clinging to his skin. And it melded with the smell of the rain.

The smell of something else.

It sent a slight chill through him.

Mitts tugged his ragged, wool blanket up over his thin, bare chest, and shuddered long and hard, hoping that the cold sensation would pass.

What time was it?

Mitts’s bedroom was dark, and foreboding. But it never got any better.

Not with the morning light. Not in tomorrow’s sunshine.

The Compound would never be his home.

But Mitts understood that feeling at home wasn’t the point.

This was about survival.

Nothing else mattered now.

His parents had only allowed him to open the ventilation hatch a couple of days ago. That decision had been based on Doctor Heinmein’s advice.

Heinmein had come to skulk about Mitts’s bedroom, in the middle of the afternoon, about a week ago. He had arrived with a device which emitted otherworldly sounding interference:

But, just like everyone else, he had seen the news reports.

It would only start him off crying again.

As Mitts propped himself up on his elbow, the springs of his camp bed made a series of dampened
shrieks
. He reached out for his wristwatch which lay on the upturned plastic case beside his bed. The glow-in-the-dark display told him that it’d just gone five in the morning.

He wrapped the watch about his wrist.

When he sniffed, he placed the smell in the air as disinfectant:

Through the ventilation hatch.

Whenever Mitts smelled
that
smell he always thought of radiation. Of the stuff which had brought the world crumbling down.

Brought the world, for all intents and purposes, to a slow and steady halt.

Mitts shrugged off his blanket and stepped down onto the bare, ice-cold laminate flooring.

Back home, back in his
real
bedroom, Mitts had had a thick carpet. He hadn’t appreciated it until he had arrived here, to the Compound, to his new ‘home’. But he knew now that having a carpet spread beneath the bare soles of his feet was a privilege.

Like always, Mitts had on only a pair of pyjama bottoms: the ones with the green-and-gold tartan design; the ones which were well-worn, and which his mother, about a week before they left home, had talked about having thrown out so that he might get a new pair.

Nobody talked about throwing things out now.

Mitts mashed the light switch beside his bed with his fist, and the too-bright, fluorescent strip lighting blinked into life. It shone its steady glow over the whole of Mitts’s bedroom.

Mitts yawned and then padded over to the ventilation hatch, the smell of disinfectant coming stronger still now. One thing that Mitts loathed above all else about his ‘bedroom’ was how tall the ceiling was. He had never thought about the low-down ceiling in his bedroom back home making it seem more cosy, but that was definitely the case.

The ventilation hatch was high up on the wall, and Mitts had been told, in no uncertain terms, by both parents, on separate occasions, that he wasn’t to mess with it.

Could they
really
blame his curiosity?

As Mitts had planned it long ago, in one of those fits of boredom that was par for the course about the Compound, he headed over to the large, plastic container in the corner.

The one which was stuffed full of his possessions.

All he had been able to collect together before he had fled his home with his mother and father.

Mitts slid the plastic container along the floor, making a teeth-grating scraping noise that he hoped wouldn’t wake his parents, or Heinmein.

When he brought it just beneath the ventilation hatch, he clambered up on top of the plastic container, feeling it support his weight without too much difficulty.

People—other kids, teachers—had always described Mitts as ‘wiry’, ‘spry’, or, in low voices that they
believed
he couldn’t hear, ‘a streak of piss’.

That last description wasn’t helped by his blindingly blond hair.

As Mitts stood on the plastic container, the smell of disinfectant became nothing less than a stench. It bit at Mitts’s nostrils. Sent a swirling,
dizzying
sensation right down to his gut. He tasted the tomato sauce at the back of his throat. Stopped for a moment, forced himself to keep it down. He could still hear the rain dripping down the other end of the ventilation hatch.

Soon it would stop raining completely.

Mitts couldn’t so much as turn his nose in the general direction of the ventilation hatch without feeling overpowered by the stench of disinfectant.

Whatever it was . . . whatever was causing that stink . . . it was
up there
, sitting right by the exterior hatch.

Mitts peered through the metal slats of the ventilation hatch. He had often fantasised about peeling off the hatch and crawling through it. As he lay on his side, on his camp bed back down in the middle of the room, he would wonder to himself if he might be able to fit through it.

Why, it would be a whole other world inside.

He looked to the hatch, saw that it was held in place by four sturdy screws—one in each corner.

He didn’t have tools to take care of that.

Mitts continued to peer through the slats for another few moments, and then he felt his chest tighten again. What was it? Something had changed. It took him a moment to realise it. The smell, the
stink
of disinfectant. It had lessened now. Mitts could hardly smell it, let alone feel the burn passing through his airways.

Mitts had to strain himself to so much as
sniff
out a remainder.

At breakfast, as always, as per his parents’ instructions, Mitts was fully dressed.

This morning he wore a white V-necked t-shirt, grey-blue jeans, and a pair of battered trainers that he’d used for PE back when he’d had to go to school.

Back when ‘school’ had existed.

He didn’t have to do PE now.

The kitchen was farcically large—Mitts often thought about that word he’d learned in his last week of English: ‘farcical’, it seemed so apt for right now.

The kitchen was all stainless steel. Enormous, blocky counters, all shining in the bright, even light. The sinks were like bathtubs. And the central, steel surface, which they made their kitchen table, was easily large enough to seat thirty. They all needed high stools to sit comfortably, or else they had to precariously balance a chair atop a pile of books, or a sturdy box sourced from somewhere or other in the Compound.

‘All’ of them was Mitts, his mother, his father, and Heinmein.

His father stood over one of the more modest stoves, cooking up scrambled eggs from a powdered mixture. Just like always, he wore a shirt.

For some reason, when Mitts had left home—when they had come
here
—Mitts had believed that his whole family would be reduced to sitting about all day in tracksuits. All of them in comfort clothing. But, no, it was quite an insistent feature of the Compound. His father demanded that Mitts—his father demanded that he himself—wear normal, daytime clothes.

Items which, as his father might put it, ‘they’d be happy leaving the house in’.

The shirt that Mitts’s father specifically wore that day was a chequered design, with a base of sailcloth white, with bridging purple lines over the top. He cooked with his shirt sleeves rolled up and with several of the buttons down the front undone . . . it could get pretty hot at the stove, with all the metal around.

Underneath, his father wore a pair of smart, black jeans, loafers on his feet.

One thing was for certain, his father would be prepared to meet and greet just about anybody who might stop by at the Compound.

A real shame that the rest of the world was dead.

Whenever Mitts sat in the kitchen, he couldn’t help but breathe in the bloody smell of metal all about him. He knew that he would never get used to
that
smell. The smell which reminded him of all those times—those
countless
times—when he had gone and cut himself somehow.

Fading by Blair, E. K.
The Lost Art of Second Chances by Courtney Hunt
Shirley by Susan Scarf Merrell
Take Three, Please by Anwen Stiles
Words Heard in Silence by T. Novan, Taylor Rickard
In Darkness by Nick Lake
How I Fly by Anne Eliot
The Domino Effect by Andrew Cotto
Chimera by John Barth
Lies That Bind by Maggie Barbieri
Our partner