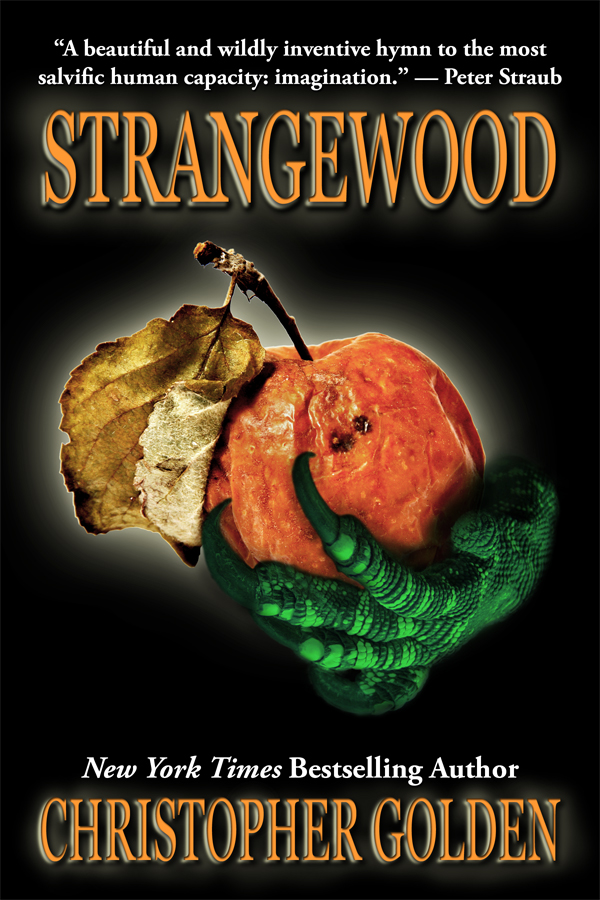 This book is a work of fiction. All characters, events,
dialog, and situations in this book are fictitious and any resemblance to real
people or events is purely coincidental. All rights reserved. No part of this
book may be used or reproduced in any manner without the written permission of
the author.

"If Clive Barker had gone
Through the Looking Glass
,
he might have come up with something as imaginative and compelling as
Strangewood
."
— Kevin J. Anderson, author of
Dune: House Harkonnen

"
Strangewood
the novel is a daring and thoroughly
engrossing blend of wonder and adventure, terror and tenderness. Strangewood
the place is what Oz might have been if L. Frank Baum had grown up on a steady
diet of Stephen King." — F. Paul Wilson, author of
The Keep

Without you, the sun would never rise.

Other Works by Christopher Golden

Where do we get our ideas?

There are two types of people who ask this question: those
who’d like to find out where the ideas come from so they can go there and pick
up a few, and those who think I’m absolutely insane because of the weird shit I
write.

Most of the time, I push the question off. The truth is,
most ideas are bits of inspiration and information I’ve cobbled together over
the course of months or years, things that are completely unrelated but which
end up revealing themselves as connected, if only I’d work a little harder at
filling in the blanks. These are ideas that are built, not found.

Recently, I’ve actually dreamed a couple of book ideas, but
I don’t talk about that much because I think it pisses people off. It means I
didn’t work for them. That’s not precisely true — dreams don’t make a lot
of sense and so they have to have the blanks filled in as well — but
still, it makes it sound easy.

Then there’s the “eureka” idea. I’ve had three of those
revelatory moments thus far in my career and I’ve been very pleased with the
results each time.
Strangewood
came about that way.

I had recently been to a convention where Clive Barker was
urging the writers in the audience not to restrict their own imaginations. He
felt that the worst thing a writer could do was to have an idea and then rein
it back, tell themselves it was too wild.

The timing of this was vital.

Shortly after I returned from that convention I was being
interviewed for a magazine by my friend and later colleague Hank Wagner. My
son, Nicholas, was perhaps three at the time, and what we’ll call a
Winnie-the-Pooh aficionado. Which is to say we had more than two dozen Pooh
video tapes that we watched round the clock.

I love Winnie-the-Pooh. Always have. I read the original
Milne to my kids when they were very small. But good God, there’s only so much
of anything one man can take. I told Hank that I had watched so much Pooh that
I’d reached the point where I’d love to see armed warriors on horseback ride
down into the Hundred Acre Wood, skin the little bastards, and nail their pelts
to trees.

Strangewood
was born in that moment. The whole thing.
Certainly there were details that came later, some of them intrinsic to what I
perceive as the success of the story. Also, as I wrote, I was greatly
influenced by a wonderful short story I had read years before called “The Power
of the Mandarin,” by the cartoonist, writer and gentleman, Gahan Wilson.

But for all intents and purposes, that was it. The light
bulb. The eureka idea.

So for those of you who ask that question, you now have an
answer, at least where this story is concerned.

What a relief to find that the mad imagery that had come
into my head at that moment was vivid enough not only to propel me through the
book, but to carry others along with me. I asked a handful of writers I knew to
have a look at it, some of them friends and others friendly acquaintances, and
I waited with trepidation for their replies. You can not possibly imagine the
relief and elation I felt when the feedback began to arrive from authors who
had always had my deep and abiding respect: Peter Straub, F. Paul Wilson,
Graham Joyce, Kevin J. Anderson and others lent their voices in support. I felt
blessed and, also, like the luckiest bastard on Earth. I thought I ought to
hurry up and get the book out before they changed their minds.

Upon publication, readers embraced the book as well. The old
adage about not being able to please everyone is true, of course, but by and
large those who ventured into
Strangewood
with me that first time around
seemed to have been more deeply affected by it than the readers of anything
else I had ever written. I received countless e-mails asking for more
adventures in Strangewood . . . and who knows? Perhaps, one day. In fact,
there’s a story in my head already, a sort of eureka junior, and I even have a
title . . . but that’s for another time.

Unfortunately, word didn’t get out quickly enough, or widely
enough and as so often happens,
Strangewood
slipped out of print. But
the e-mails kept coming. People continued to ask about it. And my editor, Laura
Anne Gilman, continued to champion this odd little story.

So here we are, back again, hopefully for a much longer run
this time.

I’ve often referred to
Strangewood
as the book with
which I “grew up” as a writer. Sort of ironic, I think, given that it concerns
children’s literature and the sorts of characters that populate the landscapes
of such works. Nevertheless, I still think of it that way. The dark fantasy
novels I’d previously written were about action and ideas. Don’t get me wrong,
there’s something to be said for that.
The Shadow Saga
will always be
near and dear to my heart and I intend to keep visiting that world. But I found
with
Strangewood
that I had other types of stories in me.

Instead of action and ideas,
Strangewood
is about
characters and situations. While working on it, I began to think of it — and
to refer to it — as a domestic dark fantasy. To me, that meant that it
was about the people first, about an ordinary group of people with ordinary
problems. In this case, about Thomas and Emily Randall, recently divorced, and
their troubled son Nathan. It was about extraordinary things happening to these
ordinary people, and the consequences that resulted from that. It was about
fatherhood and divorce, about creation and neglect, and about how we have to
negotiate emotionally when love falters.

See, and you thought it was just about talking crows and
pissed off saber-toothed tiger men.

Strangewood
remains my favorite of all my books.

I hope you enjoy your journey there.

Forgive me, please, if I also hope that you don’t emerge
entirely unscathed.

In the traditions of the Fantastic, the motif of the Woods
looms large. Christopher Golden’s
Strangewood
emerges, trailing clouds
of glory, from those very traditions. The Woods is a place of archetypal force.
The writer who invokes the power of the greenwoods knows that the stakes are
high and the list of antecedents long. In fact it would take a book on its own
to chart the treatment of the theme and the antecedents are too rich to
catalogue here.

In fact I ought to write it, though I know I won’t because
it would take too long. But if I did I could talk about how fairy tale
tradition locates so many of its glorious stories —
Hansel and Gretel
,
Babes In The Wood
,
Red Riding Hood
, just to name three — in
the Woods for very particular reasons. Or why
A Midsummer Nights Dream
by ol’ Will Whatsisname has to be located in the Forest of Arden; or about Kipling’s
Man-Cub, just like Edgar Rice Burroughs’ Tarzan, being raised in the jungle by
animals.

In their brilliant cataloguing of Fantasy motifs the
encyclopaediasts Clute & Grant generated the phrase
Into the woods
to denote the process of transformation or passage into a new world signaled by
entering woods and forests. It is very often that, but it’s actually even more
specific, and certainly more than the usual fantasy portal to transformation. For
the Woods is a very literal place of both dark and light. Of beaten pathways
and uncharted zones. Of twists and turns. A place where you may encounter
strange allies or enemies masquerading as friends. It is the primal locus of
fear and wonder. In other words, in the fiction of the Fantastic, the Woods is
so often the psychic correlative to the condition of Childhood.

The Woods stands in for the budding consciousness of the
child, the individuation of character, and the ultimate emergence from the
woods represents the passage out of childhood. Or to put it another way, the
passage out of unconsciousness and into self-consciousness. For example, CS
Lewis launches the children of his
Narnia
sequence into the woods before
having them emerge as heroes. But — and it’s a big but — the
protagonists do not have to be children. More recently and in works more
complex, varied (and dare I say superior to Lewis), Charles De Lint (
Greenmantle
),
Rob Holdstock (
Mythago Wood
) and Ramsey Campbell (
The Darkest part of
The Woods
) — just to name a few — explore the awe-inducing presence
of the Greenwood and its role in the human psyche.

Christopher Golden takes this rich tradition and braids it
beautifully with another pattern recognisable to the connoisseur of the
Fantastic concern: that of the artist (in this case a writer) haunted by his
own creations, Stephen King’s
The Dark Half
and Peter Straub’s more
recent In
The Night Room
being too very fine examples of the species. All
writers work with antecedent forms. What separates the mere copyist from the
creator (and Christopher Golden along with all the authors mentioned above is a
superb creator from antecedent form) is the originality of vision that makes a
story worth recasting in a persuasive new form.

In the case of
Strangewood
, what Christopher Golden
does is to complicate all of the above by positing the question of the
relationship between Childhood, Creativity and the Imagination. These are
indeed haunting themes for all writers, especially authors of the Fantastic. There
is, after all, a relationship between vulnerability and the imagination. What
can be more vulnerable than the image of a small child in the woods? And what
can be more clever than that device by which Christopher Golden brilliantly
contrives to have not only the child, Nathan, at risk in the woods; but also to
render the adult hero of the narrative, Thomas, as simultaneously the
responsible father and the original child, the “Our Boy” of Strangewood.

It’s a master-stroke of story-telling, and one which
elevates
Strangewood
, pushing it into that prized place in which the
story is mysteriously larger than itself.

So there is in
Strangewood
an exploration of the
complex relationship between a writer’s family dynamics, childhood,
imagination, creativity and children. All of this is offered in a fascinating
double narrative, where Strangewood reaches out, root and branch, to impact
upon the world of its creator.

Thomas, the protagonist of the story, is an author who
suffers an extreme responsibility for the things he has created in the
children’s novels he writes. A terrible revenge is visited on his own child. The
novel links a disintegrated marriage, which of course threatens the happiness
of the child Nathan, with the internal collapse of the Fantasy world — Strangewood
— created by the author Thomas. The question is whether the crisis is
precipitated by the flawed nature of Thomas, or by the crisis of his marriage;
but whichever it is, in this case “the sins of the father are visited on their
sons.”