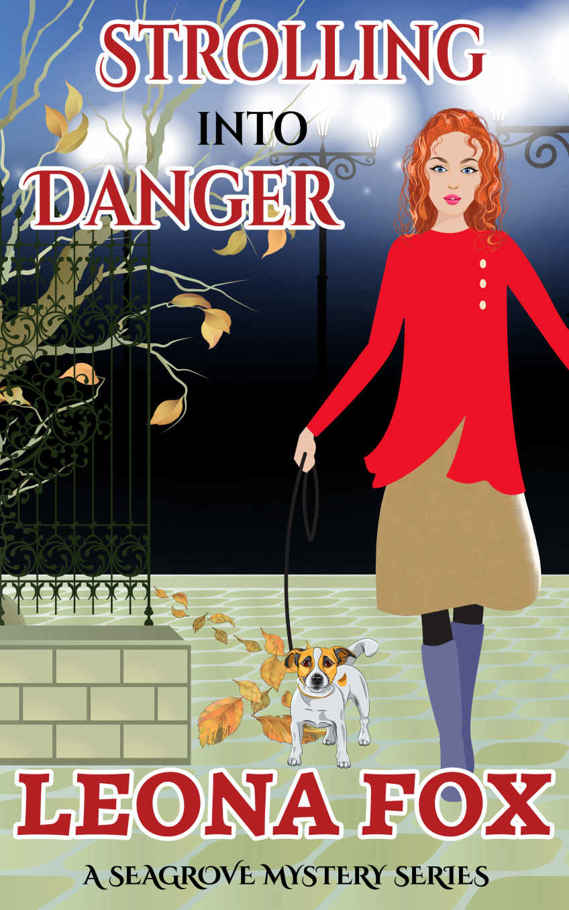 All rights reserved. This book or any portion thereof may not be reproduced or used in any manner whatsoever without the express written permission of the publisher

Sadie Barnett, the proprietress of Seagrove’s only rare treasures and junk shop, Timeless Treasures, was out very late. It was nearly midnight and she and her diminutive terrier, Mr. Bradshaw, finally were taking their evening stroll. She’d been doing inventory and time had gotten away from her… in fact, if it weren’t for Mr. Bradshaw whining and scratching at the door she’d probably still be hard at work.

Keeping up with inventory at her shop, Timeless Treasures, tended to be a regularly scheduled exercise in controlled chaos. While she and her shop assistant, Betty, tried being diligent about logging in all the items Sadie brought back from her travels, invariably she would find things on her shelves for which she had no record. It happened with startling regularity, and Sadie was beginning to think the shelves were birthing items at night when she wasn’t watching. When they had found another such item at ten o’clock this evening, she’d sent Betty home. There was no point in both of them being exhausted the next day.

Sadie contemplated the number of items she had in her shop and wondered if she shouldn’t have a clearance sale. The best part of owning a business that sold the rare and unusual was going out into the world and finding those things. But she couldn’t do that now because her shop already was bursting at the seams. It was definitely a conundrum.

Mr. Bradshaw trotted along ahead of her, his tail high in the air. She almost never had to restrain him because his manners were impeccable, although normally she kept him on a leash during the day--you never knew who was going to be afraid of a dog. He sniffed along the flowerbeds planted between the edge of the sidewalk and the street. Seagrove was proud of its quaint beauty and even now the town was planted with mums and asters.

Sadie looked in the window of the vintage clothing store and enjoyed the feel of the night’s cool air on her cheeks. Inventory always made her hot and sweaty. She noticed signs for a circus in most of the windows. It was the traditional circus with clowns and trapeze artists, to say nothing of wild animals such as lions and tigers and bears, oh my. She thought she might like to take her fiancé, Zack Woodstone, to see it. Surely even the police chief got an evening off work once in a while.

She had moved on and was looking in the window of the hardware store when Mr. Bradshaw barked once and trotted back to her.

She'd just looked up to see what was upsetting him when a woman came careening around the corner and clutched at Sadie, struggling to stay upright.

Sadie grabbed the woman by the elbows to steady her and wondered if the she had been drinking. She was at least a foot taller than Sadie--not that it was hard to be taller than Sadie–and swayed alarmingly. She stared at Sadie with dark eyes partially hidden by dark waves of hair falling over her face. The woman was speaking, but Sadie had no idea what she was saying. It was a language she never had heard before.

The woman shook her head, slid from Sadie’s grasp and curled up on the sidewalk. Sadie went to help her up and stopped. She blinked and cursed her brain, she was having trouble processing what she was seeing.

A very huge knife handle was protruding from the woman's back, just under her left shoulder blade. Sadie wondered if it was too much to hope that it was a knife with a very large handle and a very small blade.

“I don’t know when,” Sadie said, wondering what the woman was trying to ask her. When would she die? When would the ambulance come? Sadie just didn’t know.

The woman still was alive when the ambulance pulled up. There was a flurry of activity as paramedics erupted from the ambulance and two police cruisers with lights flashing disgorged police officers onto the street.

A paramedic knelt next to Sadie and pried the woman’s fingers from Sadie’s hand. Her fingers had begun to go numb and Sadie wiggled them to get the feeling back.

The woman’s eyes opened wide as a police officer helped Sadie up, and she reached out, begging Sadie to come back to her. But the paramedics moved in around the woman and Sadie no longer could see her. She picked up Mr. Bradshaw and moved away, hoping the paramedics could perform a miracle so the woman wouldn’t die.

Sadie stood at the edge of the circle of activity surrounding the woman until the ambulance pulled away. Then she sighed deeply, set Mr. Bradshaw on the ground, and turned to walk back to her shop, the dull ache of sadness settling in her chest.

“Mr. Bradshaw,” she said, “I don’t know what this world is coming to. I’ve never seen that woman before in my life and yet she’s come to Seagrove to be stabbed in the back. It’s inconceivable.”

Passing The Bakery, the shop next to hers, Sadie noticed a light on. She tapped quietly on the door to see if John was in. It was possible he’d just forgotten a light when he’d left that afternoon. But her tap on the glass brought John to the door. He peered through the window and smiled when he saw her and opened the door.

He ushered her into the shop and Mr. Bradshaw came in with them and went to see if any mice had dared to take up residence since he’d been there that morning.

“I was going to ask you the same thing. Why are you here? Your alarm will be ringing in a couple of hours,” she said.

Since John had taken over the bakery, they’d become close friends and she knew his routine. Not that it was difficult to guess bakers hours, the pastries had to be ready at the crack of dawn.

“I had the idea for a new pastry,” he said. “I’ve been perfecting my recipe.”

“You’ll be exhausted tomorrow,” she said. “How will you make it through the day?”

“I’ll let Liza run the shop in the morning. I’ll go sleep when she arrives and come back to help close up,” he said.

“It’s the only way I can manage new recipes. I’m too busy when the shop is open to concentrate on what I’m doing.”

“Well, I, for one, thank you. Your pastries are always fabulous. You have a gift,” she said. And it wasn’t hyperbole, he really did have a gift for baked goods.

“What are you doing out so late?” he asked. “It’s not like you. Here, let me make you some hot chocolate, it will make you sleepy.” Sadie sat at the counter and filled him in while John made two mugs of hot chocolate.

“I was doing inventory and neglected Mr. Bradshaw. About midnight he insisted I take him for his evening constitutional. So we went out.”

“You were doing inventory at midnight? Surely you can do that during the day when Betty is running the shop? Or vice versa?”

“Oh John, I have such a huge problem.” She sighed and took a sip of the rich hot chocolate. It was heaven and her shoulders dropped a little.

“My store is sprouting oddities all over the place. We’re finding so many items that aren’t on the inventory sheets. Betty and I don’t understand it. We document everything as it comes in, and yet we’ve found more than a hundred things that aren’t on the books. I have to document them all.”

“Are they tagged?” he asked.

“You do tag everything, don’t you?” He leaned on the counter and watched her, a look of puzzlement on his face.

“That’s the thing. Everything has a scan code, but when we scan them, they come up blank. No such item found. It’s confusing.”

“So your shop is sprouting pre-tagged items and it’s keeping you up to all hours,” he said.

“It’s probably just a computer glitch. You’ve lost some data. It’s a pain to have to re-key everything, but it’s not a mystery.”

“You probably are right,” she said.

“But here’s a real mystery. While I was walking Mr. Bradshaw, a woman ran right into me and she’d been stabbed.” She drank her hot chocolate and told John the whole story.

“But that’s unbelievable,” he said. “How could that happen in Seagrove?”

“I know,” she said. “A fatal stabbing here in little Seagrove. What’s the world coming to?”

“She hadn’t, yet. But you should have seen the size of the knife sticking out of her back. It was huge. I don’t see how she could survive.” Sadie shuddered at the memory.

Sadie smiled at him. “You’re a bastion of hope, John. And now your chocolate has made me so sleepy I must go home. Thank you.”

John locked the door behind her and she supposed he was going back to his new pastry recipe. She and Mr. Bradshaw went home to bed.

Sadie was drinking coffee on her balcony the next morning when Zack appeared. Although the sun was warm, the air was crisp and she had a blanket wrapped around her coat. She called down to him as he levered himself from his jeep after parking on the street outside her shop.

“Another coffee?” She gestured to The Bakery. “And a sticky bun? Please?”

“You read my mind,” he called back and disappeared into the bakery.

Sadie wondered if living next door to The Bakery was an advantage or a detriment. Her midsection was not getting any smaller. She shrugged, her doctor pronounced her healthy, so who was she to worry? The Bakery was a godsend. She could get the best coffee in town right next door. Considering Sadie had a serious caffeine addiction and knew her own coffee making skills were inferior, the availability of ready-made coffee a few steps from her door was a lifesaver.

“I’m here on official business,” Zack said as he placed two cups of coffee and a bakery bag on the table between them.

“But first, tell me why you are wearing a coat and a blanket?” He grinned at her.

“You look kind of like an under the bridge box-dweller in New York City.”

“It’s getting cold out here,” Sadie said, “but I’m not ready to give up my perch above the street just yet.”

“We could get you a little plastic tent and a space heater and then you could be out here all winter.” Zack raised his eyebrows at her. “I would do that for you.”

“Oh, stop. When it starts snowing, I’ll have my coffee inside, you awful man.” She kicked him gently with the toe of her fake fur slipper.

“I need to get your statement about the stabbing last night. I tried sending Wilson or Smith, but they declined. I think they are afraid of you.”

“There’s not much to tell. I was walking Mr. Bradshaw – where is he? Did you see him when you came in?”

“He came to say hello with a cobweb on his whiskers.”

“Those dang spiders all are trying to move inside now that it’s cold. He’s not happy about it.” She sipped her coffee and peered into the bakery bag.

“Yum.” She pulled out the sticky bun, took a bite and kept talking. She knew Zack wouldn’t mind.

“Anyway, I was walking Mr. B. and this woman came around the corner and ran right into me. She was swaying and I tried to steady her, but she fell. That’s when I saw the knife handle sticking from her back. I called 9-1-1 and the ambulance came and that’s all I know.”