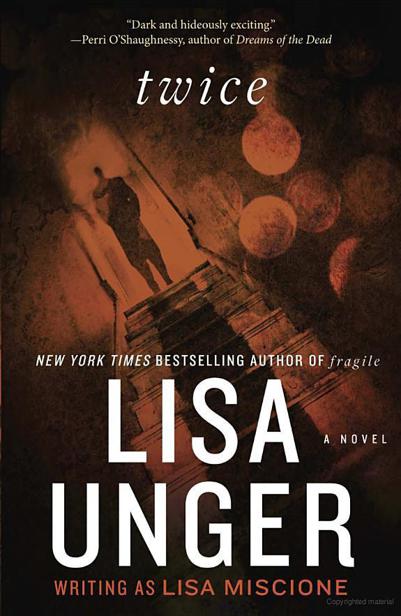 “Dark, disturbing, and hideously exciting. I will have to take my teddy bear with me to bed tonight, and doubt I will get this frightening set of twisted characters and the malign gothic town they come from out of my head for days.”
—Perri O’Shaughnessy,
New York Times
bestselling author

“Gothic horror, hints of incest, and the isolated denizens of those tunnels combine to make this a compelling and creepy suspense novel.”
—January Magazine

“A steadily developing series … with a strong central character.”
—
Booklist

“Readers can tell that author Lisa Miscione has been steeped in the classic formula of mysteries—Agatha Christie, P. D. James, and even Arthur Conan Doyle. Underlying her fresh writing style and modern, real characters is the outline of the classic whodunit.”
—
Mystery Scene
magazine

“Lydia Strong and Jeffrey Mark are back in Miscione’s third outing featuring this vibrant NYC PI team … in this enthralling and gritty thriller.… Definitely a tale that will easily hold the reader’s interest, this comes highly recommended.”
—
New Mystery Reader

“Another assured outing in this solid, highly readable series … Again in
Twice
and seen before in
The Darkness Gathers
and
Angel Fire
, Miscione succeeds in the strength of the character development. She has allowed a dark, haunted Lydia the ability to grow and find a peace within herself  … all the while remaining true to her character’s tough, smart, bitchy, focused self. I enjoy and admire this author’s refreshing and gutsy character development choices.”
—
I Love A Mystery Newsletter

Darkness, My Old Friend
Fragile
Die for You
Black Out
Sliver of Truth
Beautiful Lies

Published in the United States by Broadway Paperbacks, an imprint of the Crown Publishing Group, a division of Random House, Inc., New York.

Broadway Paperbacks and its logo, a letter B bisected on the diagonal, are trademarks of Random House, Inc.

To my grandparents,
Frederick and Donna Unger

An Excerpt from
Smoke

Where there is love, there is life.
—Mahatma Ghandi

I was nineteen years old when I first met Lydia Strong. I was living in the East Village, dating a New York City police officer, and attending Eugene Lang College, the undergraduate school of the New School for Social Research. I was sitting in a car, under the elevated section of the “1” line in the Bronx, waiting—for what I can’t remember. But in my mind that day, I kept seeing this woman running past a church. She was in New Mexico. And all I knew about her was that she was a damaged person, someone in great pain. Running, for her, was salve, religion, and drug. That was Lydia.

I pulled a napkin and a pen from the glove compartment and started writing the book that would become
Angel Fire
. It took me ten years to write that novel, mostly because the years between ages nineteen and twenty-nine were, for me, years of hard work and tumultuous change. But also because, during that time, I let my dreams of becoming a writer languish a bit. Lydia was faithful; she waited.

In spite of a first-rate education, a career in publishing, and a strong desire to write fiction, I didn’t know much of anything when I was writing my first novel. I don’t think you
can
really know anything about writing a novel until you’ve actually written one. (And then you go to school again when you sit down to write your second, and your third, and so on.) All I knew during that time was that I was truly fascinated by this woman occupying a place in my imagination, and I was deeply intrigued by her very dark appetites. I was enthralled by her past, by the mysteries in her present, and why she wouldn’t let herself love the man who loved her. There were lots of questions about Lydia Strong, and I was never happier over those ten years than when I was trying to answer them.

I was fortunate that the first novel I ever wrote was accepted by my (wonderful, brilliant) agent Elaine Markson, and that she fairly quickly brokered a deal for
Angel Fire
and my second, then unwritten, novel
The Darkness Gathers
. I spent the next few years with Lydia Strong and the very colorful cast of characters who populated her life. And I enjoyed every dark, harrowing, and complicated moment with them as I went on to write
Twice
, and then
Smoke
.

I followed Lydia from New Mexico, to New York City, to Albania, to Miami, and back. We trekked through the abandoned subway tunnels under Manhattan, to a compound in the backwoods of Florida, to a mysterious church in the Bronx, to a fictional town called Haunted. It was a total thrill ride, and I wrote like my fingers were on fire.

I am delighted that these early novels, which I published under my maiden name, Lisa Miscione, have found a new life on the shelves and a new home with the stellar team at Broadway Paperbacks. And, of course, I am thrilled that they’ve found their way into your hands. I know a lot of authors wish their early books would just disappear, because they’ve come so far as writers since they first began their careers. And I understand that, because we would all go back and rewrite everything if we could.

But I have a special place in my heart for these flawed, sometimes funny, complicated characters and their wild, action-packed stories. I still think about them, and I feel tremendous tenderness for even the most twisted and deranged among them. The writing of each book was pure pleasure. I hope that you enjoy your time with them as much as I have. And thanks, as always, for reading.

I
t was night when he came back. His return was washed in bright moonlight, accompanied by the crackling whispers of branches bending in harsh cold wind. He stood for a while on the edge of the clearing, making himself one with the barren trees and dry leaves beneath his feet. Standing tall and rigid as the black, dead trunks around him, he watched. It stood like an old war criminal, a crumbling shadow of its past grandeur, the stain of its evil like an aura, the echo of its misdeeds like a heartbeat. It lived still. He couldn’t believe that after all this time, it lived. He pulled cold air into his lungs and felt the fear that was alive within him, too. Like the old house, his dread had aged and sagged but would not be defeated by time alone.

He made his way across the once elaborately landscaped and impeccably manicured lawn, now a battlefield of dead grass, weeds, hedges that had grown wild then died from neglect. The branches and thorns pulled at his pant legs like an omen. Everything about the house, even the grand old oak that stood like a sentry beside it, warned him away. But he was a part of that house and it was a part of him. He was all about collecting the lost parts of himself now. It was time.

Memories flickered before his eyes, 8mm film projected on a wall. He could see her dancing and see her smiling, see her running. Her chubby little girl legs, her tiny skirts and little shorts. He could see her blond pigtails, her round blue eyes. As she grew older, grew
beautiful, her hair and eyes both darkened, her skin looked and felt like French vanilla ice cream. He could see her in those last moments before everything went bad. He heard her laughter and her screams and both were music to him. His love for her was a ghost pain. Since they had been wrested apart, he felt as though someone had donated his organs to science without waiting for him to die. He lived with a prosthetic heart.