Read Sub for a Week Online

Sub for a Week 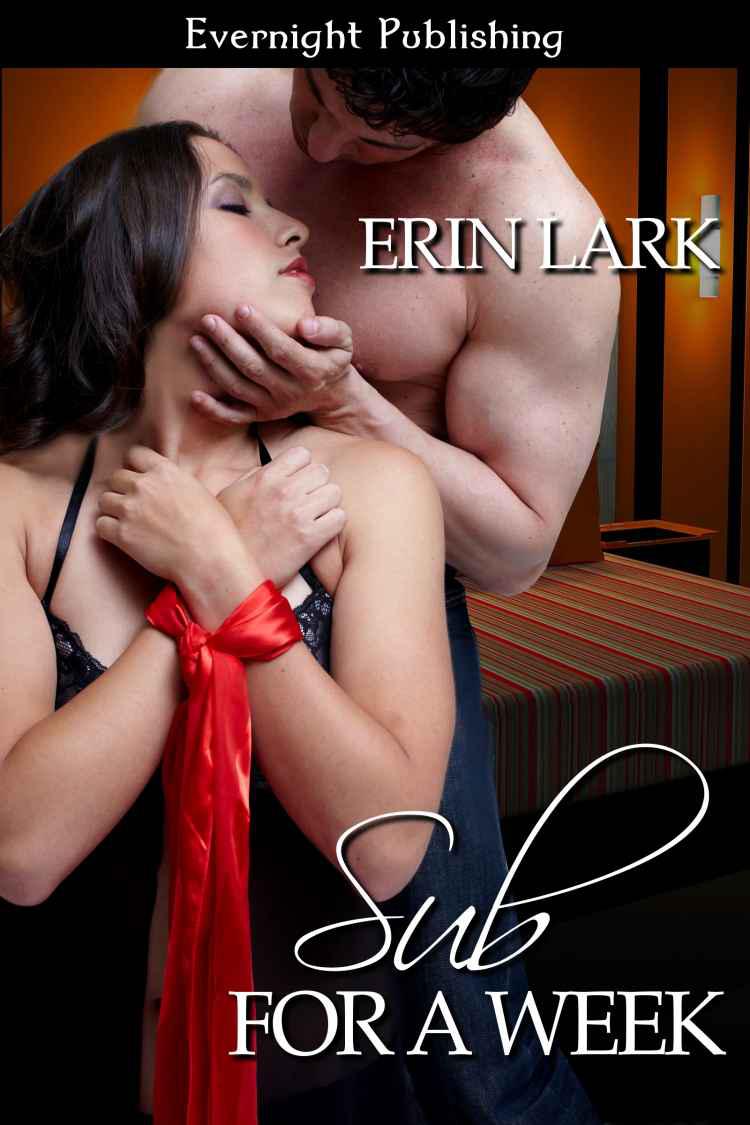 WARNING: The unauthorized reproduction or distribution of this copyrighted work is illegal.

No part of this book may be used or reproduced electronically or in print without written permission, except in the case of brief quotations embodied in reviews.

To my husband.
Thank you for letting me vent to you about my friends, even if they only exist in my imagination.

SUB FOR A WEEK

The blink of a black cursor taunted me as I waited for Daniel’s well thought-out reply. He always took his time, even when we were nearing the end of a session.
Like right now.
I checked the clock on my desktop.
Fuck.
Too far into the appointment to bump back my next client and much too soon for me to have to say goodbye to Daniel for another week.

We’d made a lot of progress since he came to the
Empowering Minds
website and found me as a therapist, but I knew we still had a long way to go. And while we’d never met in person, I was getting too close to him.
Much too close.
I’d tried distancing myself, but even doing so for the sake of his health, not to mention my own, was almost impossible when it meant he’d have
to
share his story with someone else.
Someone not even remotely close to as understanding as I was.

Performance issues.
It’s what he’d written in one of his first replies. And he wasn’t the only one. I could relate. Good God, could I relate. Sure, I could’ve gone to therapy or under hypnosis myself, but after working in this field for the better part of a decade, you learn your way around another professional’s mind games. I could tell what they were going to do well before they did it. I couldn’t help it. I overanalyzed.
Just like you always do.

I swallowed hard and willed the IM screen to tell me something.
Anything.
And when Daniel's reply finally came through, it knocked the breath out of my lungs.

I furrowed my brow. It wasn’t the first time a client had asked to see me. I’d even done personal visits from time to time, but never with a client like this. Not when I was this invested in them.
Pull the cord,
Jules,
pull it before he takes you with him.

Now it was my turn to pause before I replied. I almost always offered a response right away. The longer I took, the more time a client had for doubt to set in, and that meant setting Daniel back weeks, if not months. I couldn’t do that to him, but what could I say?
Tell him no.
I couldn’t. Rejection was bad from any source, and even if he knew it was to keep our professional relationship safe, that didn’t mean it would hurt any less.

And he’s seen enough of that.
Rejection for my clients seemed to go hand-in-hand with performance issues or when a partner wasn’t ready to move forward. Some partners
were understanding
, but most of them … most of them tossed their loved ones to the curb like a bag of trash.
And you’re always there to pick up the pieces. Just this once, let it go. Let someone else deal with it.

My stomach twisted with guilt as I reread what he’d sent. The words hadn’t changed. The cursor on my screen teased me even more, daring me to even try typing without my hands shaking all over the damned place.

Taking a breath, I exhaled to clear my head.
Therapist mode.
I had to keep this professional.
Don’t take it personally.
I could hand it off to another therapist, one like Terry or Catherine.
But they don’t know him.
Neither did
I
in the beginning.

Placing my fingers on the keys, I typed the best reply I could.
"Where?"
When?
I winced. I’d completely lost my mind.
So much for being professional.

His response came back so fast I don't think I'd even taken a breath since the last one.
"You know Journeys near Broadway and 10
th
?"

Journeys was
one of the local dungeons, and while I'd never been there, I'd certainly heard of it.
"Yes..."
I didn't send the message. Seeing as there was no way to read him over the screen, I considered deleting my reply altogether, but decided to add to it instead.
"I don't think it's a good idea for us to meet there though."

"Would you rather we meet at my place?"

I winced.
Not public enough.
And a bar would create an even bigger scene if some of the more face-to-face clients saw me there with Daniel. Clearing my throat, I sent my next reply.
"The dungeon would be fine. What time?" And how will I know who you are?

"Eight sound okay to you?"

I checked the clock. I had a few hours until then and not a single client booked for the evening. Clicking my tongue, I knew meeting Daniel was
probably
definitely a bad idea, especially on a Friday night.
Call it off, Julia.
I was supposed to be distancing myself—not digging a deeper hole.

"Eight would be fine."

"Meet me in the main lobby. I'll be the one wearing a suit."

My heart skipped a beat. I couldn't breathe. In the same instant it took Daniel to send his reply, he logged off, ending our session five minutes early.
Five minutes.
Five minutes to compose myself and try to clear my mind before my next appointment.

Julia, what have you gotten yourself into?

The remainder of my appointments felt even longer than usual. Clients who usually held my attention with real life drama and new fetishes could barely keep me awake. My replies were delayed. My mind was scattered. In all honesty, I wasn't sure if it was Daniel's forward invitation or my accepting it that caused my nerves to fray at the ends.

Without knowing who he expected to find waiting for him, I settled for the calm therapist look as opposed to something a little more comfortable.
Or revealing.
He was going to wear a suit, so I did the same. Grey slacks and jacket with a very tame, cream sweater underneath. And after fighting with my brown hair for what felt like hours, I pulled it back in a ponytail, ignoring the fact that by doing so, I'd exposed my neck. No need to give him the wrong idea.
You have to cut him free.
I would.
Tonight.

The drive over was uneventful. I stopped at lights I'd passed under countless times before. But as soon as I reached my destination, the butterflies from earlier this afternoon returned. I gripped the steering wheel even after I’d put the car into park. At this rate, I'd be lucky to get out at all.
You can cancel.
This close to our appointment?
Not a chance. Not when I didn’t know his number.

Good going, Jules.
I rolled my eyes and drew in a shaky breath. Checking myself in the rearview mirror, I tried not to notice how flushed I was or how the bags under my eyes seemed even more obvious now that I was looking right at them. In my rush to find the right outfit, I'd neglected to use any kind of makeup.
Not that you use it anyway.
I still had some in the bathroom cabinet—
which is well past expired.

I swallowed hard. There was no getting out of this one. If it had been anyone else, someone I didn't have as a client, I would've turned on the ignition and headed for home.
But not Daniel.
We'd come too far in his sessions for me to ditch him the first time he asked to meet in person.
You're too close to this one.

It didn't matter what I did. Stay. Go. The results would've been the same.
Nerves on top of even more nerves either for abandoning him before I could walk through the door or for meeting him in a public dungeon.
It's public.
People would see us.
It's safe.
Now I wasn't so sure.

Steeling
myself
for whatever waited beyond the front doors, I got out of my car and made my way inside the brick building. The air was cooler in the reception area than I expected, and after eyeing the chairs to either side of the room, I approached the front desk.

"Welcome to Journeys. Will you be joining anyone tonight?" a blonde woman asked, glancing up at me from under the rim of her glasses.

I opened my mouth to say something, but whatever came to mind sounded just as unprofessional as it probably was.

The clerk flashed me a knowing smile and gestured to one of the chairs. "Have a seat to either side of the room."

I was about to sit when a hand touched one of my shoulders.

My back stiffened, and whoever was behind me laughed. It was Daniel. It had to be. But then how did he know it was me?
Maybe because you look so out of place.
Or maybe it was because we were the only ones there. Yeah, that must've been it.

The clerk looked past me and lit up. "Good evening, Sir. Will you be—" she cut herself off, probably once she realized who he was. "Oh. Let me get the door for you."

I tried and failed miserably. Now that he was here, standing between me and my only escape, I wasn't sure what to expect. His voice was gentle, but his words seemed anything but.

The blonde got up from her desk and waved a keycard in front of another set of doors. "You can go in. Most of the playrooms should be open."

Dingo Firestorm by Ian Pringle
A Ticket to the Boneyard by Lawrence Block
18 Thoughts (My So-Called Afterlife Book 3) by Ayres, Jamie
Grace of the Goddess (The Death Dealer Book 3) by Katie Roman
Making the Cut by Jillian Michaels
A Match Made by Cupid (Harlequin Special Edition) by Madison, Tracy
The New Order by Sean Fay Wolfe
Mosby's 2014 Nursing Drug Reference by Skidmore-Roth, Linda
Jordan's Return by Samantha Chase
Poems for Life by The Nightingale-Bamford School
Our partner