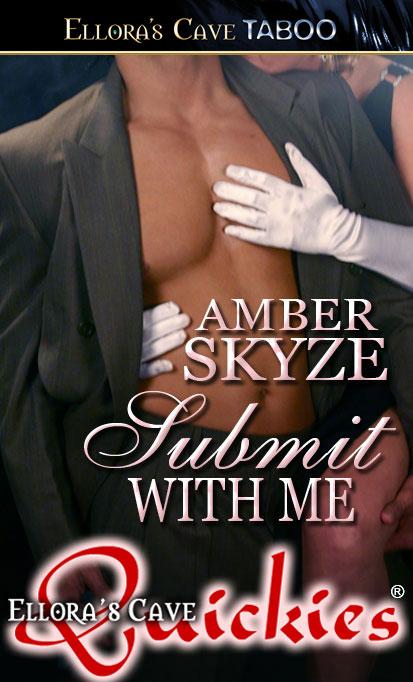 Rena is on a quest to get laid and she’s willing to go to any length to fulfill her need.

Marc has a thirst for a submissive. He longs to find someone he can bring to the edge of ecstasy and rein back in before an orgasm. He wants to tie, tease and torture his submissive, pushing the limits of sexual awareness.

When he offers Rena five hundred dollars to be his sub for the night, he gets more than he bargained for. This spitfire is about to show him a thing or two about submitting.

Submit with Me Copyright © 2010 Amber
Skyze

Warning: The unauthorized reproduction or distribution of this copyrighted work is illegal. No part of this book may be scanned, uploaded or distributed via the Internet or any other means, electronic or print, without the publisher’s permission. Criminal copyright infringement, including infringement without monetary gain, is investigated by the FBI and is punishable by up to 5 years in federal prison and a fine of $250,000.

(http://www.fbi.gov/ipr/). Please purchase only authorized electronic or print editions and do not participate in or encourage the electronic piracy of copyrighted material. Your support of the author’s rights is appreciated.

To Lee Pearce, who helped bring this story to life and
publication.
I appreciate all your words of wisdom.

Rena had one goal in mind—to get laid. Taking a long drag off the straw nestled in her fruity
drink,
she scanned the smoke-filled bar for a potential mark. Tonight she didn’t care about getting to know someone. No, tonight she only cared about filling the void in her aching pussy.

“Damn,” she cursed under her breath. Tables were full with happy couples, either enjoying drinks or dinner. Soft jazz played in the background. Normally Rena enjoyed the lazy tempo, but not tonight. She was too busy looking for someone to fill her need.
Her desire.
Rena’s pussy ached to be fucked. Glancing around the haze, she shook her head. Not one guy in the place looked eligible. She considered going to another bar but decided against it. Not many bars offered rooms above them for the clients to rent by the hour. No, this was the place where she intended to find the man to make her pussy sing. Besides, the patrons were upper-class and the bar had a reputation for only allowing in respectable people.
Safe.
That was the reason she was here and wouldn’t go anyplace else.

Staring into the mirror behind the bar, she gave the room another scan.
Still nothing.
She couldn’t believe there wasn’t one man desirable enough to give her the relief she craved.

She emptied her drink. Maybe it was best if she called it a night. Obviously she wasn’t getting laid tonight.

As Rena stepped off the barstool, her face came into contact with one broad chest. She glanced up to stare into the most exquisite blue eyes she’d ever seen.

“Leaving so soon?” he asked in a husky voice.

“Just going to powder my nose,” she lied.

“I didn’t think women did that any longer.”

“I’m not just
any
woman.” Rena winked. “I’m every man’s wish come true.” Leaving him standing there, mouth agape, she headed toward the bathroom.

He ordered her a new drink when she shimmied onto the stool.

“Thanks for the drink.” She didn’t bother to look at him, but she caught him watching her in the mirror.

Rena couldn’t help herself, she smiled.

He was gorgeous, dressed in tight-fitting denims and a painted-on black
tee ,
muscles bulging from under the short sleeves.

“Come here often?”
Lame
.
She hated pickup lines, so why was she using one on him?

He laughed a hearty laugh.

“So what brings you here tonight?”

“I’m looking for a little action.”

“What kind of action?” Maybe the same kind she was looking for?
A “wham bam thank you ma’am” kinda night?

“And what makes you so sure I’m not interested in your kind of action?” Insult dripped from her voice.

“Are you saying I’m too prim and proper for you?”

He shook his head no.

Are you fucking serious?
He was turning her down? No fucking way. This was not the way she had planned this night. She was determined to get laid and Mister Muscles fit the bill.

“Let me guess, you’re looking to get laid—no strings attached?”

He didn’t flinch when she blurted out the statement.

Instead he stood, reached deep into his pocket and pulled out a wad of cash.

“You think you can handle my action?”

He slapped a hundred-dollar bill on the bar.

“I’m offering you one hundred dollars to be my slut for the night.”

She almost choked on her drink.

“See, I knew you wouldn’t be able to handle it.” He sat back down.

“That you think one hundred dollars is enough. Make it five and I’ll be Mary Fucking
Poppins
if you want.”

It was Marc’s turn to spew his drink. Her gray eyes looked pointedly at him.

“What I’m looking for tonight is someone who wants to be controlled.
Someone who can handle being dominated.
Like I said before, I don’t think you’re that woman.”

He watched her face flush crimson. Was she pissed or embarrassed? He wasn’t sure, but he wanted to know what tying her to the bed and teasing her until she was screaming to be allowed to come felt like. Yes, Marc wanted to know what she would do if she had to submit to him. Yes, if she was willing, he would have her moaning all night long.

“Like I said, up your offer to five hundred and you’ve got yourself a submissive.”

Marc searched her face for any signs of uncertainty. Sliding off the stool, he stood behind her.

“Are you willing to be blindfolded and tied up?” he whispered in her ear.

“Will you let me do whatever I want to your body—no questions asked?”

“Depends.
Are you clean? How can I trust you’re on the up and up?”

He pulled out his wallet and flipped it open. “Will my license do? I have lots of credit cards.
Even a library card.
I’m a law-abiding citizen. But if you don’t want to play with me…”

“Actually you’re being smart. Now what do you say,
wanna
play?”

He slapped four more hundred-dollar bills on top of the first one. “I have a room rented upstairs. Let’s go.”

If she had any doubts, she didn’t show it. She drained her drink, stuffed the bills in her purse and turned to him.

He shrugged.
“Whatever you say.
But I doubt you’ll want to leave once I get started.”

A smart-ass.
Marc liked her spunk. But could she keep quiet like a good sub? He didn’t know, but he was dying to find out. In fact, he might just enjoy her speaking out of turn, because if he pegged her right, she would.

They walked to the elevator in silence. Once they stepped over the threshold and the doors closed, he pinned her against the wall.

“Ready to have your world rocked?”

“You’re awful confident in yourself. I really hope you can live up to all these expectations you’ve set.”

He pinned her body tighter against the wall. “You won’t be disappointed.”

He used his strong fingers to pinch her nipples through the thin fabric of her dress while his other hand roamed under her skirt. Tilting his head sideways he smirked.

He nudged a digit against her pussy lips.
Let’s see if she can handle this
.

Marc rubbed up and down her folds, adding pressure as he glided over her clit.

“No coming or you’ll have to be punished.”

“You’ll come when I give you permission. Not before.”

He tweaked her nipple harder and drove his finger into her cunt. She grabbed on to his shoulders and yelped.

Marc continued finger-fucking her pussy. “I’ll tell you when you can come and it’s certainly not now.”

She tried pushing him away, unsuccessfully. Her tiny frame was no match for him.

He stepped back, releasing her body from his grip. With his finger he lifted her chin. Her bottom lip trembled.

“Are you frightened of me?” He pushed off the wall and turned his back, frustrated. He raked his fingers through his hair. He could not and would not be with someone who was afraid of him.

“Not of you. I’m afraid I won’t be a good submissive.”

He returned to her, stunned. Where was this coming from? She was totally confident up ’til this point.

“Why don’t you think you’ll be a good submissive?”

“I’ve never.” She looked down to the floor. “I’ve never been someone’s submissive.”

He lifted her chin again. “There is nothing to be afraid of. I will guide you along the way. If at any time you feel uncomfortable, you just say the word and it all ends.”

“I’ve never been accused of hurting anyone or taking things too far. I promise you I will respect your wishes.”

“What is it?” He could tell something was still bothering her.

He let out a nervous laugh.

Marc quickly turned and put his foot in front of the door to prevent it from closing.

“If you don’t want to go ahead with this, I’ll understand. Keep the money and return to the bar.” He wasn’t angry. He was sincere. He didn’t want her if she was uncertain with the whole process.

“After you, Mary
Poppins
.”

Together they stepped out into the hallway. Marc led her to his suite. Room five-seventeen.

Rena couldn’t believe her eyes when she walked into the room. Yellow rose petals covered the floor and all the furniture. Candles glowed throughout the room. Soft blues played in the background. It was one of the most romantic scenes she’d ever seen. Something she’d only read about in romance books.

Naked Came the Stranger by Penelope Ashe, Mike McGrady
Accidental Sex Goddess by Lexi Ryan
A Tale of Magic... by Brandon Dorman
All the Wild Children by Stallings, Josh
The PRETTY (EROM Curvy Romance #1) by Darlene Jacobs
Half a Dose of Fury by Zenina Masters
Enchanter (Book 7) by Terry Mancour
La fortuna de los Rougon by Émile Zola
The Scribe by Francine Rivers
Deadly Game by Christine Feehan
Our partner