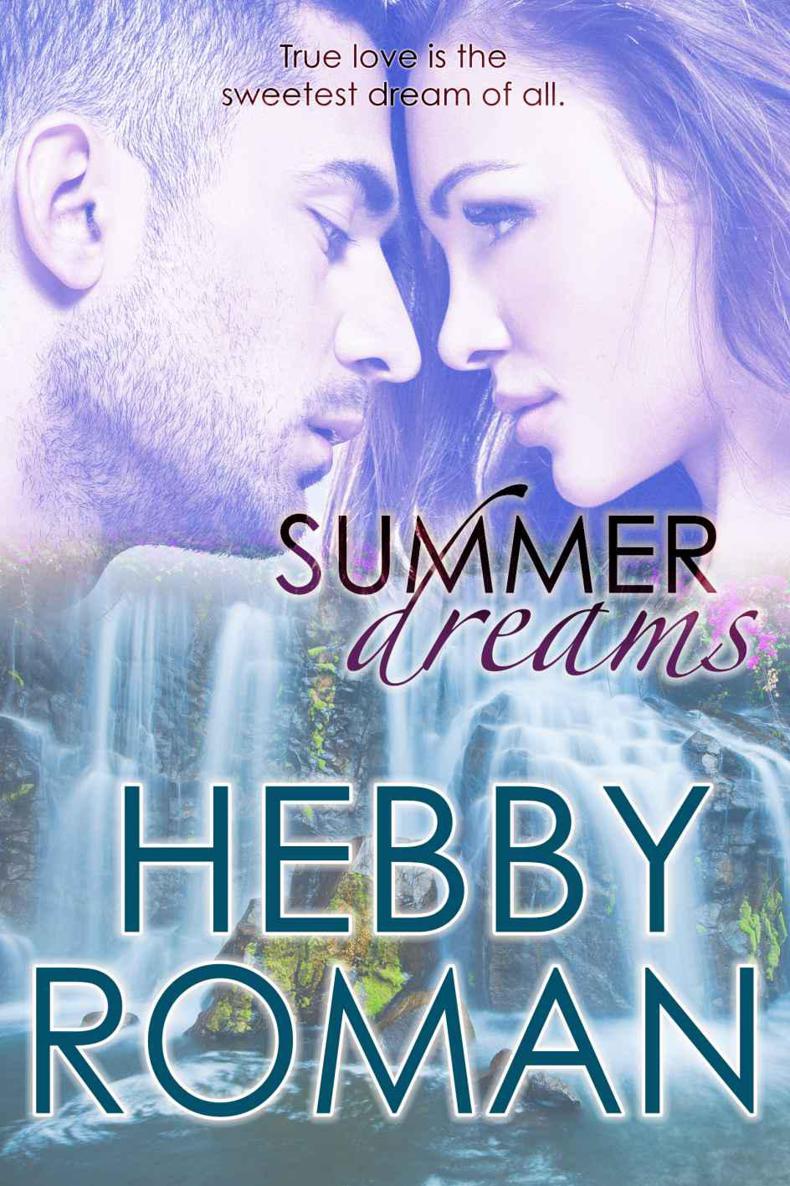 A word about the author

Also published: The Princess and the Templar

"You'll never swing straight if you dip your shoulder."

Esteban Montalvo raised his head and checked his swing. The bat sliced the top of the baseball, and instead of hitting the net, the ball landed with a soft plop in the dirt, only inches from the tee.

He turned to face the source of the ill-timed comment, Natalia Colón. Childhood friend and granddaughter of his employer, Natalia was never far from his thoughts, though she lived hundreds of miles away. Pura, Natalia's
abuela
, had said she'd be arriving today. But he hadn't expected her to seek him out.

Smiling, he dropped the bat and opened his arms wide. "
Bienvenido
, welcome home, Natalia." That wasn't exactly the truth, as her home was in Dallas, Texas. She'd been born and raised there, but every summer, she returned to New Mexico to stay with her grandmother.

She threw her arms around his neck and gave him a quick hug. He inhaled the familiar jasmine scent of her and willed his heart to slow, keeping his arms loose at her waist, wanting to hold her but afraid to at the same time. For years, he'd hidden his true feelings, maintaining a casual distance. She must not have felt the same constraint because she stepped back but grabbed both his hands and enfolded them with hers, cocking her head to one side, as if to study him.

He ducked his head and stared at the baseball in the dust. He must look foolish, but he couldn't help himself. Just being around her made his heart race and his groin tighten. From the time his chin sprouted manly hairs one look from her had taken his insides apart and left him panting for more.

He lifted his head and squeezed her hands before releasing her. His gaze strayed to her slender fingers and focused on her left hand. Her fingers were bare---no ring. He closed his eyes and opened them but when he looked again her long fingers were still bare. Where was the huge diamond and emerald engagement ring?

She must have known what his glance was searching for, but he wouldn't admit it. He shrugged. "How was your trip?"

She stretched her arms above her head and twined her fingers together. "Uncomfortable and cramped. I think they squeeze more seats into the planes each year."

Nodding, he swallowed and bent down to pick up the baseball, placing it carefully on the tee, hoping to buy time. With her arms stretched above her head, the silky texture of her blouse had drawn taut over the lacy outline of her bra. He'd glimpsed the dark shadows of her nipples through the white fabric.

Perspiration popped on his brow and trickled behind his ears. And it wasn't from the hot sun overhead, either. He was used to the thin, burning air of mountain summers. It was Natalia. It had always been Natalia. Even when he'd dated other women, he couldn't help but compare them with her. And now she was free.

She could have forgotten her ring or left it in a safety deposit box or ... But he didn't think so. For the past three summers, she'd worn it like a badge of honor, proclaiming she was taken. Uncertain of what to do or say, he retrieved his bat and resumed his crouched stance at the tee.

"Don't keep practicing, Esteban,
por
favor
. You can practice anytime. Let's walk and talk. I'm stiff from the plane, and I've waited all year to get back to the mountains. Come with me."

He let go of his bat again. "Okay, I can't say no to you." Tentatively, he stretched out his hand. "Let's go." Without hesitation she grasped his hand, joining their fingers together.

How stupid was that, him offering to take her hand? Maybe he was a masochist at heart. How had his psych professor explained that peculiar condition? Being masochistic meant you enjoyed pain. He didn't think he enjoyed hurting, so why had he reached out to her? Because,
por
Dios
, there was only so much temptation a man could take. She was free or so he assumed. And he'd denied himself for too long.

He savored the feel of her small hand snuggled in his, relished the pulse of warmth and life flowing from her hand to his and back again. Did she feel the attraction buzzing from his fingertips to his toes? Or was she as clueless to the way he felt as she appeared?

Even worse, might she be attracted to him but choose to ignore her feelings, wishing them away?

He could understand because he knew he wasn't worthy of her. So he'd kept his distance all these years, but could he deny his attraction forever? Why hadn't she married and stayed in the city? Then he could have forgotten her. But that was a big fat lie that he told himself because he would never forget Natalia.

They headed west into the setting sun toward their favorite place, trudging along side-by-side over the rutted ground, keeping their thoughts to themselves, focusing on the winding trail. Bit by bit, brown topsoil gave way to rocky boulders. The land lifted, angling upward, challenging them and making their breath come in quick pants. They walked without talking, a habit they'd acquired when they were younger. Once they reached their destination, they would talk.

When they topped an undulating hill with a craggy knob near the summit, they heard the dull roar before they saw the waterfall. Hidden in the fold of the mountain, half-way up, the cascading water spilled, like so many sparkling diamonds, into a deep green pool. The sun struck silvered glints from the rushing water, splintering into millions of dazzling, dancing lights.

Natalia stopped and dropped his hand. She bent over and placed her hands on her knees and dragged air into her lungs. "Oh, the altitude always leaves me breathless. Or is it the waterfall? I never can remember how beautiful it is, and pictures don't do it justice, either."

She must have recovered from their climb quickly because in the next moment she'd spread her arms wide and ran forward with them outstretched. When she reached the shore of the waterfall's pool, she danced and twirled there, turning around and around, a pagan wood-nymph giving thanks to the mountain and the waterfall.

Esteban squatted on the muddy shore and watched her. Watched her, hell. He couldn't take his eyes off her. She made him sick with longing, greedy to fill the dark, empty place in his heart. And just seeing her like this, his heart expanded in his chest. Hitting a grand slam couldn't compare. Nothing could compare with Natalia.

She kicked off her shoes and waded into the deep emerald water. Turning toward him, she raised her head and shouted, "
Vénte
, what are you waiting for?"

Grinning to himself, he obeyed, pulling off his cowboy boots and socks in one quick motion. He rolled up his pants. The muddy shore was cool on his naked feet and soft, partially covered with moss and grass. The tang of cedar and pine filled his nostrils. The waterfall throbbed in the background, its roaring thunder welcoming him.

When he reached her, she'd waded deeper, and water stained the hem of her form-fitting, A-line skirt. He grabbed her in his arms. Caught up in her joy, he swung her around, lifting her from the chill mountain water. Her thick black-mink colored hair swirled around her head, a rich skein of blue-black hues.

She threw her head back and laughed a deep, throaty growl. Her laughter was both sensual and startling because it didn't seem to belong to her. Unlike her demure exterior, her laugh made him tingle all over and hinted at sweat-drenched, tangled sheets.

If he didn't let her go, he'd be hard as a post and there'd be no disguising his arousal. Lifting her higher, he carried her to the edge of the pool, and then he allowed her to slide slowly down the length of his body. Her eyes opened wide, surprise in their cinnamon depths, and then they drifted shut. Her hot pink tongue snaked out and wet her lips.

His lips sought hers with a will of their own, slanting her head back into the cradle of his arms. He tasted salt and honey on her lips and reveled in the sensation of her mouth against his. Not since he'd been fifteen and she seventeen, had he allowed himself to kiss her.

Moving slowly, tenderly, searching for the perfect joining, he worshipped her mouth with his lips. His mouth was saying, without words, what he'd yearned to admit for years: how he felt about her. He smelled the perfume in her hair, a light, flowery scent, reminiscent of blooming jasmine. Her body was soft and rounded, the points of her high breasts pressed against his chest.

Heaven couldn't be any better than this.

Too soon, she drew back, abandoning his hungry kiss. Her topaz-colored eyes flashed a warning, and he knew she wanted to be let go. Reluctantly, he lowered her until her bare feet rested on the fern-covered shore.

His breath rasped in his lungs, and he was stiff as a pole in his too-tight jeans. He turned aside and willed himself to silently recite the current batting averages of each player on his team, one at a time, and he splashed his face with the icy cold water. She stood on the shore, waiting for him, but her gaze was focused on the tumble of the waterfall.

Good, that was better. At least he could face her without embarrassment.

He waded over to her, and she took his hand in hers and tugged. He followed her lead, and they walked along the perimeter of the pool, the water lapping at their feet, the ferns tickling their toes.

"You know I'm not engaged anymore," she said.

Now it began. How many times had they walked here, pouring their hearts out to each other? He didn't know, he'd lost count.

"I noticed your engagement ring was missing."

"
Sí,
" he agreed. The damned ring had been so huge and flashy, you'd have to be myopic to miss it.

He waited, not wanting to ask about her broken engagement. It had been all he could do to restrain himself when she'd come home, that first summer, with the ring on her finger. But he'd been younger then and less sure of himself. He'd had nothing to show for his life but a string of unfortunate choices.

And the previous summer when she'd brought her fiancé for a week's visit, he'd feigned illness and stayed away. The last thing he wanted to do was see Natalia with another man. Now he felt stronger, more sure of his own worth. But was it enough? Would it ever be enough where Natalia was concerned?

"I swear you don't look a day over twenty-five."

She slugged him in the shoulder. "You're cruel, just because you're two years younger."

"Okay, I won't tease you." He took both her hands in his own and held her at arm's length. "I swear you've never looked lovelier."

And it was true. Natalia, with her brilliant cinnamon-colored eyes and long, raven's wing colored hair, had always been a beauty. He supposed she'd gone through an awkward stage in puberty, but he couldn't remember it. Wide-set eyes, a pert nose and high cheekbones complemented her full, luscious mouth. A mouth he wished he was kissing again ... right now.

Where in the heck was she coming from, worrying about her age, about her looks? Had her ex-fiancé put her down? If the idiot had dared to say one bad word to Natalia, Esteban would happily fly to Texas and deck the guy.