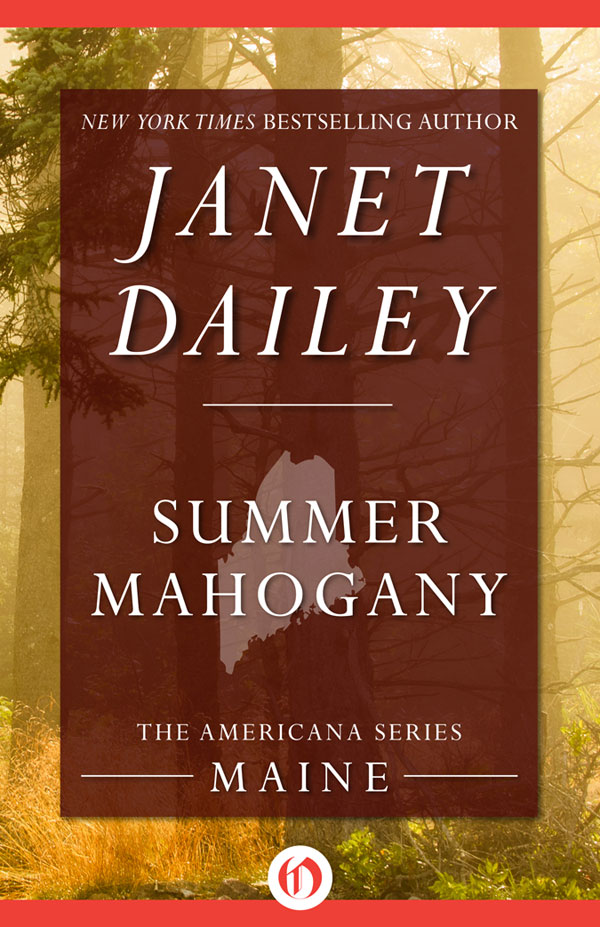 Valley Of the Vapours (Arkansas)

After the Storm (Colorado)

Night Of The Cotillion (Georgia)

The Bride Of The Delta Queen (Louisiana)

A Tradition Of Pride (Mississippi)

One Of The Boys (New Jersey)

Beware Of The Stranger (New York)

The Widow And The Wastrel (Ohio)

To Tell The Truth (Oregon)

The Thawing Of Mara (Pennsylvania)

With A Little Luck (Wisconsin)

For Bitter Or Worse

When I first started writing back in the Seventies, my husband Bill and I were retired and traveling all over the States with our home—a 34' travel trailer—in tow. That's when Bill came up with the great idea of my writing a romance novel set in each one of our fifty states. It was an idea I ultimately accomplished before switching to mainstream fiction and hitting all the international bestseller lists.

As we were preparing to reissue these early titles, I initially planned to update them all—modernize them, so to speak, and bring them into the new high-tech age. Then I realized I couldn't do that successfully any more than I could take a dress from the Seventies and redesign it into one that would look as if it were made yesterday. That's when I saw that the true charm of these novels is their look back on another time and another age. Over the years, they have become historical novels, however recent the history. When you read them yourself, I know you will feel the same.

So, enjoy, and happy reading to all!

Introducing Janet Dailey's AMERICANA. Every novel in this collection is your passport to a romantic tour of the United States through time-honored favorites by America's First Lady of romance fiction. Each of the fifty novels is set in a different state, researched by Janet and her husband, Bill. For the Daileys it was an odyssey of discovery. For you, it's the journey of a lifetime.

GINA STARED in shocked disbelief. It couldn't be Rhyder! Not after all these years. It was impossible. But those were his blue eyes, startling and clear. Did he recognize her? The gold band of her grandmother's wedding ring felt cold, burning like ice around her finger.

Swiftly she turned away before he saw her and knelt in front of the shallow trough of stainless steel, raised by short legs above the firewood. The synthetic material of her scarlet jump suit didn't protect her knees from the gritty sand beneath them, but Gina was oblivious to the discomfort.

Her heart was pounding like a frightened rabbit's. She was hot and cold all at the same time. It was a mistake, an illusion. Her nerves clamored as she desperately tried to deny Rhyder's presence.

But she wasn't wrong. She couldn't make herself look again. The one glimpse of his tall, lithely muscled frame was enough. Not once in nine years had she ever mistaken anyone else for Rhyder, even briefly. There was no reason to pretend she might have done so now.

No, it was Rhyder, with his jet dark hair that waved crisply when it was ruffled by a sea breeze. Maturity had added to the hardness of his aquiline features, intensified the aloof bearing that bordered on arrogance. He was still deeply tanned by the sun, increasing the startling contrast of his blue eyes with his dark coloring.

Gina closed her eyes, dark lashes fluttering in memory. The years rolled away and she remembered her response to her grandfather's question the first time he had seen Rhyder, wanting to know who the man was that his young granddaughter was staring at.

"He's from away, summer mahogany," she had answered, falling into the idiomatic speech of her native Maine.

People who neither were born nor lived in Maine were never referred to as foreigners or "furriners," nor classified as outsiders. They were generalized as being "from away."

"Summer mahogany" was a category that indicated that Rhyder belonged to the yachting set. It was a descriptive and picturesque term, considering the sun-browned appearance of the boating crowd that descended on Maine in the summer. It separated them from the regular "summer complaints," an affectionate term for tourists who visited the coastal resorts of Maine.

For the impressionable sixteen-year-old girl that Gina had been nine years ago, summer mahogany became more than just a term. Rhyder personified summer mahogany, with his features appearing chiseled in hardwood and browned by the summertime sun. There had been a raw virility about him, a male vitality such as Gina had never encountered before—or since.

Until now, Gina trembled visibly. She wanted to run before another meeting with Rhyder was forced upon her, but she couldn't. Now that she was here, she had to stay. There was no plausible excuse she could make to leave the party.

"I know the breeze is brisk, but you surely can't be cold, Gina," a female voice chided.

Her head jerked toward the sound, her eyes snapping open, darkly turbulent like the churning green depths of the ocean. Quickly Gina masked the emotional upheaval within as she recognized Katherine Trent, Justin's sister.

"I was thinking of winter, I guess," Gina lied.

"It isn't even officially autumn yet. Don't be rushing the seasons." The admonishment was offered laughingly. "Want to give me a hand packing this?" Katherine pulled a large plastic bag toward the shallow trough, three-quarters full of water. "Justin has succeeded in getting detained by the late arrivals. He manages to do that at every clambake."

Gina smiled stiffly, but didn't comment. "I don't mind helping. Part of the fun of a clambake is the preparation."

Her hands were trembling as she reached into the bag containing the seaweed. Fortunately Katherine didn't seem to notice. Seaweed was added to the water in the trough.

"Most people are convinced that the fun is in eating." Katherine closed the plastic bag and turned to remove the burlap top, saturated with water, that covered the large drum filled with live lobsters.

Stacked on top of each other in the metal drum, the lobsters crawled around with difficulty. Their hard shells glistened in a dark green shade against the seaweed scattered among them. Wooden pegs forced their claws apart, eliminating the danger of physical injury as Gina and Katherine lifted the lobsters individually and set them in the trough of seaweed and water.

When the bottom was covered with lobsters, more seaweed was added, followed by another layer of lobster and more seaweed. The barrel drum was emptied and Katherine turned to the clams, already wrapped in cheesecloth sacks.

A few of the clambake guests drifted over to observe the preparations. Their casual interest heightened Gina's tension. The moment was approaching when she would have to face Rhyder. There were nearly thirty guests at the party and she couldn't hope to avoid him indefinitely.

Mentally she tried to brace herself for the meeting. There was always the slim chance he wouldn't recognize her. After all, she had been sixteen the last time he had seen her. Nine years would have altered her appearance more than they had altered his.

True, her hair was still dark, as midnight black as his, but it didn't fall in long silken strands between her shoulders. It was cut short, waving about her ears to add a touch of sophistication to her appearance. Her eyes remained ocean green, outlined by thick lashes, but were no longer trusting and innocent. Her curves were more womanly now, but her figure hadn't changed that much.

Gina sincerely doubted that he had forgotten her, any more than she had succeeded in forgetting him. Bitterly she resented his second intrusion in her life, and she guessed Rhyder would feel the same when he recognized her.

She stiffened at the sound of her name spoken by Justin Trent. A sixth sense warned her before she turned around that Rhyder was with him. A forced smile curved her mouth as she pivoted stiffly, carefully avoiding any glance at the man walking beside Justin. But she could feel the rake of narrowed blue eyes sweeping chillingly over her frame.

Her fingers closed tightly over the cheesecloth bag of clams as she fought the waves of panic rising inside her. If she had been given a year, she still would not have been prepared for this moment. Her composure was eggshell brittle, threatening to crack at the slightest jar.