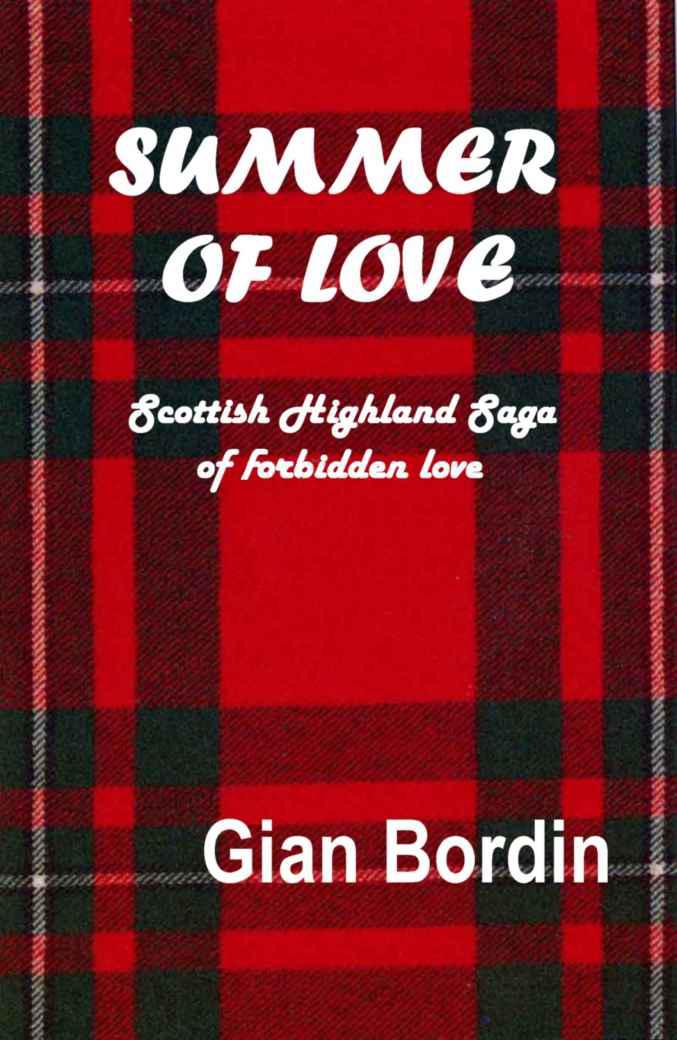 Helen, the granddaughter of Rob Roy, proud of clan MacGregor. Andrew, the illegitimate son of the Duke of Argyle, head of clan Campbell. Two clans that have been feuding each other for centuries. The brutal crushing of the second Jacobite uprising in 1746 by the British throws the two together and their innocent love blossoms on the shores of a Highland lochan, only to be shattered by the revelation of secrets hidden away twenty years earlier. Andrew flees Scotland, trying to forget Helen. After four years of restless wandering, rich and wiser, he returns to farewell the Highlands before emigrating to America. Memories of that summer of love drive him back to the lochan, where he meets Helen, engaged to be married to a MacGregor cousin. The love both thought to have securely locked away flares up stronger than before and drives them into a reckless adventure, flouting conventions and defying family, clan, and authority.

Gian Bordin grew up in a small town in the heart of the Swiss Alps. He studied in Geneva, Switzerland, and in Berkeley, California, where he got a PhD in Management Science. He defines this discipline as ‘the art of giving bad answers to problems to which otherwise worse answers would be given.’ He has taught at universities in the US, Switzerland, and New Zealand. He lives happily married in Christchurch, New Zealand. As a hobby, he has written several thrillers and historical novels, some still waiting for a publisher. He enjoys letting his characters venture into a life of their own. This novel was prompted by Sir Walter Scott’s marvelous tale Rob Roy .

Mary and Helen MacGregor hurried down Killin’s crooked street, heads held
high, their strides defiant. While Mary wore her scarlet plaid drawn around
her head and shoulders, as was the custom of Highland women, Helen’s was
arranged like the men’s.

The marked resemblance of the pair left little doubt that they were mother
and daughter. It was like looking at pictures of the same woman, drawn
twenty years apart—the older woman’s traits more angular, deepening lines
pointing to her eyes, more resigned, perhaps the imprint of the harsh life in
the unforgiving Scottish Highlands edged into her suntanned face, but still
a hint of her once eye-catching beauty.

Both carried an empty creel on their back—a wicker basket woven of
hazel rods. The girl was excited about going to the market, although she tried
to hide it behind a stern expression. It was only her second time. They had
moved to a small, north-facing glen at the foot of Creag Gharbh on the
southern shore of Loch Tay just the previous year, shortly after her fourteenth
birthday. Along with other members of their clan they had lost all ancestral
lands in 1712 because of the imprudent dealing of their notorious chief Rob
Roy, dead ten years already. Ever since then they had been reduced to live on
land illegally occupied in remote areas or as mere tenants of the Dukes of
Montrose, Argyle, or the Earl of Breadalbane—a cause of lingering
humiliation. It hardened the righteous bitterness over the continued
proscription of their name, decreed by King James I of Scotland more than
a hundred years earlier. It had been his punishment for clan Gregor’s
outrages perpetrated on their neighbors. So for the ears of outsiders, their
small branch of MacGregors called themselves Campbell.

As the market stalls came into view, a young man stepped aside to let
them pass. He wore the trews of a gentleman and a plaid in the green tartan
of the Campbells of Argyle. Helen tried to ignore his shy, searching glance.
For an instant, Mary seemed to falter in her proud stride, her face expressing
dismay. Helen looked at the older woman inquisitively, but her mother
resumed her pace and pressed on, oblivious to the mud puddles splashing her
heelless boots.

"Why did you suddenly dither? Did we forget something, mother?" Helen
asked.

Mary did not respond.

"Mother! Is anything the matter?"

"Nothing’s the matter, lass," she muttered. "Anyway, it’s none of your
business."

"Something happened. Why don’t you want to tell me?"

"Oh, I might as well tell or you’ll never stop pestering me. For a moment
I thought I saw a ghost."

"That young Argyle laird?" Helen sneered and quickly glanced back. The
young man had not moved. He was still looking at her, his head slightly
tipped to the side. She blushed, annoyed for being caught, particularly by an
Argyle. Quickening her stride to catch up, she stepped inadvertently into a
puddle. The oily mud squeezing between her toes heightened her vexation.
"What about him?"

"He reminded me of somebody I met when I was a lass your age."

"At the castle in Inveraray?"

"Yes, he looks like one of the late Duke’s sons, but he can’t be. The older
died last year and the younger must be … at least fifty by now."

"Did you fancy one of them?"

"Now, don’t you get saucy with me, lass. This is none of your business."

Her tone of voice signaled an end to the conversation. Helen knew that it
was useless to press her any further right then.

They entered the open space in front of the church. Out-of-town merchants only came twice or three times a year to Killin, and it seemed the
whole valley had flocked into town for the occasion. Mingling with the
crowds and drooling over the many trinkets displayed, the incident soon
slipped from Helen’s mind.

An hour later, their few purchases of necessities completed, they walked
past Dougan Graham, the factor of the Earl of Breadalbane. He always set up
his booth next to the fair to catch the earl’s tacksmen, usually relatives of the
laird or other lesser chieftains, like Dougal MacGregor, leasing large parcels
of land, part of which they sublet in small lots to other tenants, with all of
them sharing some of the work and amenities.

"Do you have anything for me, Mrs. Campbell?" he shouted in English
and winked, his face losing its cunning for a short moment.

"I have nothing to spare for fattening the lord! Maybe next time," she
replied in her broad Scottish accent.

He laughed, shaking his head. "You better curb your sharp tongue, Mrs.
Campbell!"

"Folks like us need it to survive," she answered, her voice challenging.

Helen’s displeasure reached her face when she noticed the young Argyle
laird behind the factor. A shy smile softened his features as their eyes met
briefly. She answered with haughty disdain. Feeling his gaze incessantly on
her, she turned away ostensibly, while at the same time becoming aware of
her mother watching him with a strange expression in her eyes. Helen’s own
curiosity was now kindled. Surreptitiously, she stole another glance. He had
dark, curly hair, cut to shoulder length, rather than gathered in a long tail as
was the current fashion of the gentry. A strong, square chin, with a deep
dimple, pointed to an obstinate determination, as did the pronounced cheekbones, all somewhat softened by his youth and the warm intensity of his light
green eyes. He looked athletic, but was at least half a head smaller than the
MacGregor men and lacked their massiveness. She tried to imagine what he
would look like in ten years—the age the sons of the Duke of Argyle must
have been when her mother lived at the castle—but she failed. She could not
quite suppress her excitement at this glimpse into her mother’s unknown
past.

As if her mother had guessed her thoughts, she took her arm and hurried
her away, back amongst the market stalls. They briefly stopped at Mr.
Hamilton’s cloth stand, inspecting the fine silks and linens displayed. The
old Mrs. Hamilton joined them.

"You have some spare cash today, Mrs. Campbell," she said, chuckling.
Her knowing smile left no doubt that she was well aware that disease had
decimated the MacGregors’ herds, as those of most highlanders in Glen
Dochart. Business was not good this year.

"Just admiring, Mrs. Hamilton. These silks are beautiful, and so soft.
Come fall I may buy myself some for a little jacket." She went closer to the
old woman and asked in a low voice that Helen could just barely overhear:
"Do we have a new helper for the factor?"

"Yes. You noticed the fine-looking lad too?" Mrs. Hamilton leaned over
to Mary and added in a whisper: "It is rumored he is the son of Archibald
Campbell; not a legitimate heir, you know, sent here to learn a trade."

Mary clicked her tongue and replied: "You don’t say? So we’ll see him
around. There’s good money as a factor." Then she turned to Helen. "Come,
lass, we must be gone, or else we’ll be caught by the weather."

Billowing clouds, their underbellies an ominous dark, rolled threateningly
down Glen Dochart. It might rain within the hour.

For a while they walked silently, their creels heavy with flour and oats to
tide them over until harvest time in three months.

"What did you find out about the young gent—your ghost?"

"We didn’t talk about him. Be quiet now! Save your breath for the walk!"

"I heard you ask the old hag about him, mother."

"Lass, don’t you talk like that about dear Mrs. Hamilton. She has always
been courteous to me."

"Mother, why don’t you want to tell me. What about him?"

Mary turned her face away, exasperated. After a few steps she said curtly:
"There’s nothing much to tell. She only said that he is a son of Archibald
Campbell, the current Duke of Argyle."

"He can’t be legitimate then, otherwise he would hardly send him here as
an apprentice."

Mary glanced sharply at her daughter. "What do you know about things
like this? … But yes, she said there’s a rumor about that."