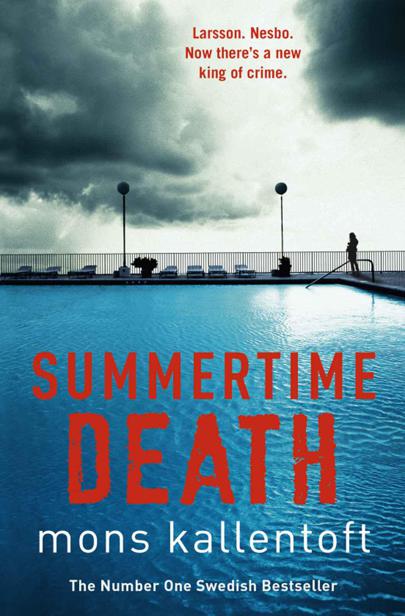 Part Two: In the Eyes of Summer Angels

Part Three: You Need to Come, Before Now Stops

The right of Mons Kallentoft to be identified as the Author of the Work has been asserted by him in accordance with the Copyright, Designs and Patents Act 1988.

For my mother.
And for Karolina, Karla and Nick.

In the final room

I’m not going to kill you, my summer angel.

I’m only going to let you be reborn.

You’ll become innocent again. All the dirt of history will vanish, time will deceive itself and everything that was good will reign in alone.

Or else I really will kill you, have killed you, so that love can arise again.

I tried not to kill, but that made rebirth impossible: the substance remained, clinging obstinately to material, and everything shameful vibrated within you and me like a hot black worm.

I tried in various ways, feeling my way, but I couldn’t get there.

I scrubbed, washed and cleaned.

I watched over you, gathered you in and took you.

He’s sitting on the sofa.

His gut is open and rippling black snakes are sliding out onto the floor.

Can you see him?

Now he can’t hurt anyone any more, so say that you want to, say that you dare to come back. No oak floorboards will ever creak again, no alcohol fumes will ever make the air glow with anxiety.

The world is burning this summer.

The trees are transformed into withered black sculptures, monuments to our failures and our inability to love one another, to understand that we are one another.

We are the same, fire and me. Destroying so that life can arise again.

Someone has captured vipers, thrown them into an open oil-drum, poured on some petrol and set light to it.

The mute creatures crawl as they burn, making vain attempts to escape the pain.

I drove past the burning forest just an hour or so ago. I heard you beating against the inside of the car, ready to come out, come back, pure and free from anyone else’s guilt.

She thought she knew something about me.

But don’t be scared. The person you still need to be.

This is how it is: no one can live in fear, only in trust. Death is the penalty for anyone who deprives another person of the ability to trust.

That sort of trust is a close neighbour of love, which means that it’s a close neighbour of death and the white spiders’ legs. We needed you in spite of what you did, in spite of that. You owned our world. We couldn’t escape even though it was the only thing we wanted, and we went to you sometimes because we had no choice. It has haunted me, this enforced seeking after darkness. I know now that I will never be able to choose anything except wishing myself harm.

But when you are reborn, that curse will be lifted.

So it will all be over soon.

Everything will be clear, pure.

You will feel nothing within you, just as we once did.

You are shaking and twisting on the floor.

But don’t be scared.

Only love will be reborn. Innocence.

And then we will cycle together along the bank of the canal, in a summer that lasts for ever.

Something trying to escape?

It’s the sound of rain coming. Thunder. Finally, a drop of water upon the earth.

But Malin Fors knows better. The heat of this summer is devoid of mercy, has made up its mind to dry all the life out of the ground, and rain will be a long time coming.

Through the noise of the lingering customers, Malin can hear the pub’s air-conditioning unit rumble like thunder, shuddering, protesting at having to work such long, demanding shifts, that there doesn’t seem to be any end to the overtime this summer. The entire contraption seems on the point of collapse, its joints clattering, saying: ‘Enough, enough, enough. You’ll just have to put up with the heat or slake your thirst with beer. Not even a machine can go on indefinitely.’

Is it time to go home?

She is sitting alone at the bar. Wednesday has turned into Thursday and it is just after half past one. The Pull & Bear stays open all summer and the dozen or so customers occupying the tables have fled the draining heat of the tables outside and taken refuge in the blissful cool indoors.

Bottles on shelves in front of mirrors.

Tequila. Cask-matured. Shall I order a single? A double?

Condensation on glasses of freshly poured beer. The smell of sweat and rancid old spilled alcohol is clearly noticeable in the smoke-free air.

She sees her face in the mirrors around her in the bar, from countless angles as it is reflected and then reflected again in the mirror in front of her and the one behind her, above the green leather sofa.

A thousand reflections, but still one and the same face. Skin slightly tanned, her prominent cheekbones framed by a blonde page-boy cut, shorter than usual because of the summer heat.

Malin had gone down to the pub when the film on television ended. It was something French about a dysfunctional family where one of the sisters ended up killing everyone. Psychological realism, the announcer had said, and that could well be right, even if people’s actions seldom have such clear-cut and obvious explanations in reality as they did in the film.

The flat had felt too empty, and she hadn’t been tired enough to sleep, but awake enough to feel loneliness dripping down the walls in almost the same way she felt the sweat running down her back under her blouse. The increasingly tired wallpaper in the living room, the Ikea clock in the kitchen, whose second-hand had suddenly fallen off one day in May, the blunt knives that could do with being honed back to finger-slicing sharpness, all of Tove’s books in the bookcase, her latest purchases lined up on the third shelf. Titles that would be advanced for anyone, but improbably difficult for a fourteen-year-old.

The Man Without Qualities
.
Buddenbrooks
.
The Prince of Tides
.

Infinitely better than a lot of things a fourteen-year-old could come up with.

Malin takes a gulp of her beer.

But lonely? Or something else?

Summer lethargy at the police station, no work to tire her out, or by which she could be swallowed up. She had spent all day wishing something would happen.

But nothing had happened.

No bodies had been discovered. No one had been reported missing. No summer rapes. Nothing remarkable at all, apart from the heat and the forest fires that were raging up in the Tjällmo forests, resisting all attempts to put them out, and devouring more and more hectares of prime forest with every passing day.

She thinks about the fire brigade, working flat-out. About all the volunteers. A few police cars there to direct the traffic, but nothing for her or her partner, Zeke Martinsson, to do. When the wind is in the right direction she can smell the smoke from the fires, which seems only fitting seeing as the whole of Linköping is enveloped in a hellish heat, day and night alike, in the hot winds from the south that have parked themselves on top of the southern half of the country, as if they had been screwed down onto the landscape by the prevailing area of high pressure.