Read Sunlight on the Mersey Online

Sunlight on the Mersey 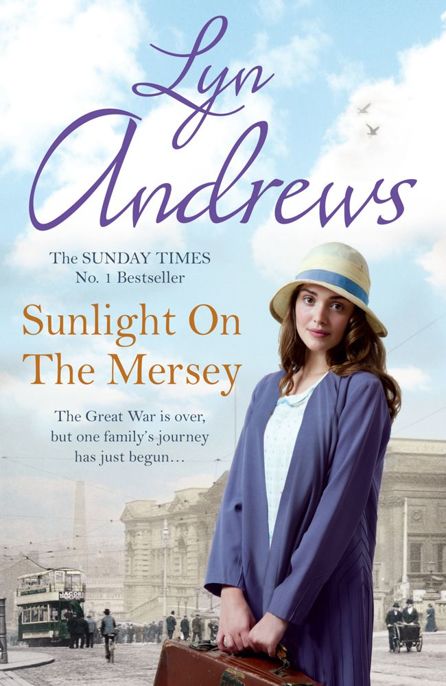 SUNLIGHT ON THE MERSEY

The right of Lyn Andrews to be identified as the Author of the Work has been asserted by her in accordance with the Copyright, Designs and Patents Act 1988.

Apart from any use permitted under UK copyright law, this publication may only be
reproduced, stored, or transmitted, in any form, or by any means, with prior permission in
writing of the publishers or, in the case of reprographic production, in accordance with the
terms of licences issued by the Copyright Licensing Agency.

First published as an Ebook by Headline Publishing Group in 2012

Lyn Andrews was born and raised in Liverpool. She is the author of many novels, one of which was shortlisted for the RNA Romantic Novel of the Year Award; her last few novels have all been
Sunday Times
Top Ten bestsellers.

The enthralling and heart-warming new novel from the hugely popular
Sunday Times
bestselling author of TO LOVE AND TO CHERISH and A SECRET IN THE FAMILY.

The Great War is over, and sisters Iris and Rose are adjusting to life in their modest Liverpool home after their brother Charlie has returned from the front. But when their mother sends Rose to the beautiful Welsh village of Tregarron to recover from an illness she discovers a new world of possibility at her feet. There, she obtains a job as housemaid to the wealthy but tragic Rhys-Pritchard family and falls in love with the young but troubled head of house. Meanwhile at home, Charlie, keen to improve his social standing, becomes engaged to the daughter of a successful coal merchant, while Iris falls for a porter from the local fruit market. Then tragedy strikes, and the whole family must pull together if they are to survive the turmoil ahead. Their support of one another can only bring them closer together, but will they be forced to put their dreams on hold in the process?

‘M
AM, HOW WILL WE
ever find our Charlie in this crowd?’ fifteen-year-old Iris Mundy cried impatiently, holding tightly to her mother’s arm. Weak late-November sunlight filtered down through the great glass domed roof of Lime Street Station to fall on the heads of the dense crowd milling about below on the concourse. It picked out the pitted brass fittings on the engine that had slowly come to a halt amidst clouds of hissing steam and the strident sound of grinding brakes. The first train bringing the troops back home had finally arrived.

The municipal band immediately burst into a rousing version of ‘The British Grenadiers’ and, simultaneously, a
deafening cheer erupted from the waiting crowds as Liverpool welcomed home its surviving sons after four years of bitter and bloody conflict on the fields of France and Belgium. The atmosphere was electric, infused with pride, relief and overwhelming joy.

Kate Mundy’s reply was drowned out by the noise but her expression was a mixture of grim determination and happiness as she began to push her way forward. It looked as if the entire population of Liverpool had turned out to welcome the boys back, she thought, although she did not intend to let that stop her being the first to embrace her son. Every day and night for the past year she’d spent worrying that he would be badly wounded or, even worse, killed, but now he was safely home. Although she was small and wiry her eagerness gave her the strength she needed to edge steadily forward towards the platform where the first passengers had begun to alight. ‘Just hang on to me, Iris, and we’ll get through this crowd somehow,’ she shouted to her daughter above the din. ‘Is our Rose with your da?’

Iris, who was a good deal taller and sturdier than her mother, managed to half turn and caught sight of her father with her younger sister, Rose, hanging grimly on to his arm. She grinned at him. ‘There’s no stopping Mam now, she’ll steam-roller her way through regardless!’ she called as the cheering gradually died away.

Bill Mundy grinned back, pride and happy anticipation in his eyes. He’d worried about his son just as much as Kate had although he’d tried not to show it too much; someone had
had to bolster the family’s spirits through those dark days. He was a big man, over six feet tall and well built, so the crowd of people in front of him presented little problem, but his fourteen-year-old daughter was slight and slim like her mother. ‘Rose, luv, whatever you do, don’t let go of my arm,’ he urged. ‘You might get lost in this crowd.’

Rose looked up at him, her dark eyes full of trepidation. ‘I won’t, Da, but I’ll be glad when we can get out of the station. I didn’t think it would be as bad as this. I’ve never seen so many people!’

Bill nodded. ‘It’s only to be expected, luv, it’s been a long, desperate and heart-breaking time for everyone. But as soon as we find Charlie we’ll be out of here.’

Kate and Iris had almost reached the front of the crowd as more and more men and boys, still in uniform and with kitbags slung over their shoulders, jumped from the carriages and pushed their way towards the barrier, eagerly searching the crowd for loved ones, relief at being home at last plain on their faces. Too many of those faces looked so much older than their actual years, Kate thought sadly; the result of the horrors they had witnessed and lived through.

Iris suddenly caught sight of her brother in the front rank. ‘There he is, Mam!’ she cried, pointing and then waving madly. ‘Charlie! Charlie, it’s me, Iris! Over here, we’re over here!’

Charlie’s dark eyes lit up and his face creased in a grin as he pushed his uniform cap back revealing thick, short-cropped brown hair.

Kate half ran the last few yards, tears of joy streaming down her cheeks as she held out her arms to him. ‘Charlie! Thank God! Oh, thank God, you’re home safe!’

Charlie hugged her and then for the first time caught sight of his father and Rose over the top of her head.

‘Welcome home, son! We’ve all missed you and we’re proud of you,’ Bill said in a choked voice, taking the kit-bag from his son and patting Charlie affectionately on the shoulder. ‘How’s the arm now?’ he added, noticing the lad wince slightly as Iris hugged him.

‘Almost good as new, Da. Just the occasional twinge,’ Charlie replied off-handedly. He’d been fortunate to come through that bloodbath with just a flesh wound and a fairly mild case of trench foot. He turned his attention to Rose, who was bobbing up and down with excitement, her cheeks flushed, her eyes bright. ‘Rose, you’ve certainly grown since I last saw you!’

Rose hugged him. ‘I’ll be fifteen next birthday, I’ve left school and I’m hoping to get a job soon! And now the war is over I won’t have to work in munitions either. Oh, we’ve got so much to tell you, Charlie, and there are all kinds of celebrations being planned!’ she blurted out. She really
had
missed him.

Iris smiled: Rose’s enthusiasm was infectious. Her sister was fortunate not to have to go into a munitions factory as she, Iris, had had to do this past year. The work had been hard, dirty, tedious and dangerous and Rose would have found it backbreaking; Rose had always been what her Mam termed ‘delicate’.

The little family reunion was being replicated all around them as wives, mothers, sisters and sweethearts embraced their menfolk with tears and cries of joy.

Bill took the situation in hand. ‘Right, let’s make our way out to the tram stop before the queues get too long. There will be more trains arriving soon and the traffic is already heavy,’ he said, guiding them towards the still crowded entrance.

As they finally emerged into the pale winter sunshine, Kate clinging tightly to Charlie’s arm, Rose still close by her father’s side and Iris just behind them, Charlie stopped and stared at the familiar sight of St George’s Hall, which dominated the opposite side of the road. The massive façade with its classical columns, the huge crouching bronze lions that guarded the plateau and the long flight of shallow steps that led up to it were blackened with soot but it was still an imposing sight – and one that epitomised ‘home’, just as much as the buildings on the Liverpool waterfront and the river itself did. There’d be sunlight sparkling on the turgid grey waters of the Mersey today, he thought.

‘That’s a real sight for sore eyes, Mam!’ he said with a catch in his voice. And one he’d often wondered if he would ever see again. Many of his mates wouldn’t, he’d left them behind in the mud of Flanders. He pushed the thoughts away. It was over now. He was home and he was determined he wasn’t going to waste his life. He’d been spared and he was going to make something of himself.

Bill had been watching him closely and noticed the hardening of his son’s expression with regret. Charlie had
changed in the year he’d been away but it would have been a miracle if he hadn’t. He could only try to imagine what the lad had been through and he was still only eighteen, he thought as he followed his wife and son down the steps and towards the nearest tram stop.

‘Da, do you think our Charlie is . . . all right?’ Rose asked quietly. She too had noticed the change in her brother’s demeanour.

Bill tucked her hand through his arm and patted it reassuringly. ‘Now don’t you go worrying any more about him, luv. He’s home, he’s fine, he’ll settle down – just give him time.’

‘Mam will be in her element now, fussing over him and fattening him up,’ Iris added, grinning at her father. ‘And there’s the street party and everything to look forward to. That will cheer them all up.’

Bill smiled happily at his elder daughter. ‘And then there’s Christmas to look forward to and it will be great to have the whole family together this year.’

Rose’s momentary anxiety disappeared at her father’s words. Charlie was home and her da was always right. Their close and loving family was complete again, there was nothing to worry about.

‘We’ve got a lot to look forward to now, haven’t we, Da?’ Iris added, linking arms with her father.

Bill nodded. ‘We have indeed, luv. The future has got to be better than the last four years – and here’s the tram. Let’s go home.’
There had been a celebratory family supper that evening although Kate bemoaned the fact that the food shortages meant she could not provide the kind of meal she had envisaged for Charlie’s homecoming.

‘Mam, after what I’ve been used to, it’s a feast fit for a king,’ Charlie had laughed, tucking into the tiny portion of meat and potatoes while his sisters had fussed over him, pouring both himself and his father a glass of pale ale.

In Your Wildest Dreams by Toni Blake
Soldiers in Hiding by Richard Wiley
Christmas is Murder by C. S. Challinor
Afterbirth by Belinda Frisch
Firefight by Chris Ryan
Alex as Well by Alyssa Brugman
Her Warriors' Three Wishes (Dante's Circle) by Ryan, Carrie Ann
Ties That Bind by Heather Huffman
Dark Sun: Prism Pentad 2 - The Crimson Legion by Denning, Troy
How We Learn by Benedict Carey
Our partner