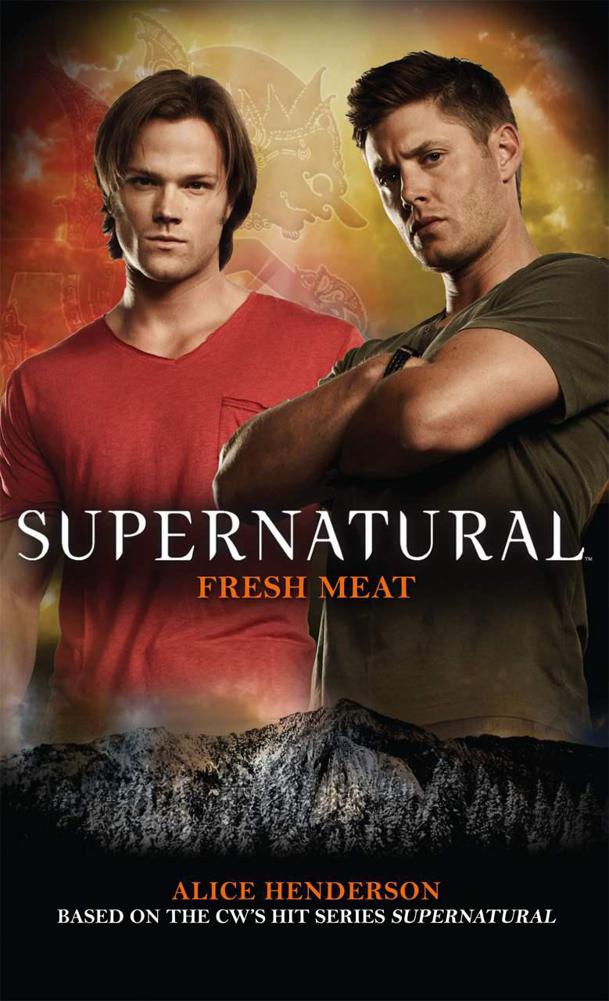 A
LSO
A
VAILABLE FROM
T
ITAN
B
OOKS:

Supernatural: Heart of the Dragon

Supernatural: The Unholy Cause

Supernatural: War of the Sons

SUPERNATURAL and all related characters and elements are trademarks of and © Warner Bros. Entertainment Inc.

Did you enjoy this book? We love to hear from our readers. Please email us at
[email protected]
or write to us at Reader Feedback at the above address.

With the exception of the characters from The CW’s
Supernatural
series, this publication, including any of its contents or references, has not been prepared, approved, endorsed or licensed by any third party, corporation or product referenced herein.

To Jason, for his never-ending encouragement

To Norma, for our adventures in the western wilds

To Gordon, for bestowing on me the love of monsters

This novel takes place during season seven, between “Shut Up, Dr. Phil” and “Slash Fiction.”

All he could think about was food. Every fiber of his being thrummed with the thought of it. Every agonizing moment was consumed with contemplating how he could find it, when he would feel it between his teeth, how it would fill up his anguished stomach. At night he dreamed of food: beefsteak; hot stew with potatoes and carrots; warm buttery biscuits; fresh roasted corn and fried chicken. He would start awake sometimes just as he sat down to a feast in his dreams, and he would scream in the darkness, hot tears streaking his face at the loss of even an imagined morsel of food. In the night, he would shove fistful after fistful of snow into his mouth, trying to bury the terrible hunger. In the last few weeks he had eaten bark and lichen and an old pair of leather boots that had given out. He’d devoured part of a boiled wool blanket, eaten tree sap, and sucked on sticks, wishing they were chicken bones he could break apart and suck the marrow out of. With a euphoric longing he thought of fragrant liver and onions, of pork chops smothered in apple sauce, of freshly made bread lathered with honey butter. Then he would weep, the hunger no longer solely in his stomach but infused throughout his entire being, in his bones, in his aching skin, inside his fevered brain.

He had to have food. He had to have meat. His small group had snowshoed away from the Donner Party camp twenty-four days ago. Their goal was to reach Bear Valley, beyond the treacherous mountains, and bring back rescuers and supplies. They had brought along meat from the camp, a few scraps from butchered pack animals, but that food was all gone now. They had hoped to find rabbits and deer along the way, but hadn’t found much. It was as if the entire forest had rebelled against the terrible winter and the animals had fled.

Months ago, before the snows fell, their guide Charles Stanton had trekked out to the great valley of California and returned with supplies, mules, and two Miwok guides. He’d distributed the supplies among the emigrants, and then urged everyone to hike out immediately. But they had been too tired. Then the snows came and they were all trapped.

Now Stanton was of no use to anyone. He’d originally led the snowshoe group, which they had named the Forlorn Hope. But a few weeks ago he’d sat down in the snow and lit up a pipe. He puffed away on it, then encouraged the others to go on ahead. He said he’d catch up that night, but no one really thought he would, even Stanton. He’d gone snow-blind, his body starved beyond endurance. No one said anything when he didn’t join them at camp that night. Everyone knew he was dead.

Now it was just the Miwok guides leading them through the endless pine forests and exhaustingly deep snow drifts. Foster couldn’t stand another day of hearing the Forlorn Hope’s snowshoes crunching in the ice-crusted snow. He couldn’t bear the thought of another pitiful night clustered around a fire, no one talking, and everyone staring ahead with hollow, grey eyes.

He didn’t believe the Miwoks actually knew the way anymore, either. Where was the game? They were supposed to be experts in this forest, but they hadn’t found any meat in days. Foster had already been snowbound near a lake with his family, starving, for more than two months prior to this.

Now the Forlorn Hope sat around a meager fire, the sun already set beyond the mountains. Cold seeped into Foster’s bones. He watched the Miwoks sitting together on the opposite side of the fire, talking softly in a language he didn’t understand. They’d been with the emigrants since October in Nevada, but they weren’t really part of the group. And now they were lost. Foster knew it. His stomach groaned and rumbled, protesting against the torture his body had endured since they’d gotten snowbound. Was he just supposed to keep following them around aimlessly? They could be going in circles for all he knew.

Foster watched the Miwoks, talking and pointing into the forest, deciding the next stage of the route. They didn’t know. They were lost. Or maybe they did know, and just wanted to lead the emigrants to their deaths. Maybe it was all a plot.

Foster placed a hand on his aching stomach. A few weeks ago they had talked about sacrificing members of the group to save the others. They suggested dueling, or a lottery system for food. They would kill and eat whoever “won” the lottery. Then the animal handler Antonio had died, and next Franklin Graves, who had made the snowshoes for everyone in the Forlorn Hope. Then Patrick Dolan went crazy, running off into the cold and stripping all his clothes off. He’d come back later and died, too. Foster had carved off chunks of the man’s side, tearing into the warm meat with a savage desperation. Twelve-year-old Lemuel Murphy succumbed next; they dried some of the meat and continued on.

Now it had been days since their food supply ran out. They sat around the fire, no one saying anything. Some started to eat the oxhide bindings of their snowshoes. Foster wondered if they’d hold the lottery, or if some accident would befall one of the members: a fall off a cliff, or a plunge into an icy river. Or maybe certain people could die for the group without them even holding a lottery. People who didn’t really count as people anyway.

As they had a hundred times before over the last few weeks, Foster’s eyes narrowed on the Miwoks. He stood up, slinging his rifle over his shoulder, and stared at them. Immediately they noticed his movement. They’d been keeping an eye on him lately, watching him warily. Foster suspected that one of the party had warned the two guides that they might be butchered. If so, then they probably intended them harm. He should get to them first. They weren’t really human anyway, were they? Not like the whites of his party. They were no more than savages. Not civilized men like him. Their sacrifice so that he could eat would be of little consequence.

Reaching Out to the Stars by Donna DeMaio Hunt
Hollywood Station by Joseph Wambaugh
Destiny's Choice by Kimberly Hunter
Laura Abbot by Belleporte Summer
DraculaVille - New York - Book One by Lara Nance
Soul Bonded by Malone, Meghan
I Hate to Leave This Beautiful Place by Howard Norman
Still Water by A. M. Johnson
Constantinopla by Isaac Asimov
The Players by Gary Brandner
Our partner