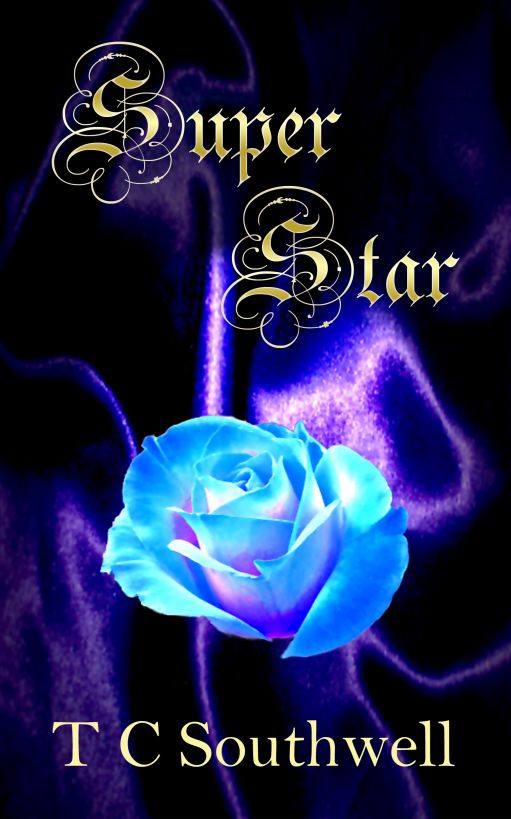 This e-book is licensed for your personal
enjoyment only. This e-book may not be re-sold or given away to
other people. If you would like to share this book with another
person, please purchase an additional copy for each recipient. If
you’re reading this book and did not purchase it, or it was not
purchased for your use only, then please return to Smashwords.com
and purchase your own copy. Thank you for respecting the hard work
of this author.

Carrin
stared at the blank page, pen poised, yet unable to write the first
line. She couldn’t even write his name. How did one write to a
world-famous film star? What should she say? Not that her letter
would ever get past his press secretary. No doubt it would be read
by some bored individual whose job it was to keep the fans at bay
and answer their letters, sending them pictures of their favourite
star without his ever having to deal with it. After all, he would
be busy with his famous friends, going out with supermodels and
actresses. He would not want some unknown girl from South Africa to
bother him. Okay, so she was a struggling writer, but struggling
was the key word. She had written several books and stories, all of
which publishers had rejected. So she was a failure, a nobody. Why
would a famous screen star want to meet her? Well, she had written
a screenplay for him, but the studios probably would not like it,
even if he did. She could only hope that he would, and, if so, that
he could persuade a studio to make it. After all, if a megastar
like him wanted to act in it, surely a studio would be more
inclined to consider it? That was her hope, at any rate.

Carrin sighed and looked at her drawings of him, enjoying,
as she always did, the pure symmetry of his face, with its clean
lines and noble features. It surprised her that he was still
single, yet only the other day she had seen a magazine article
about him. The photograph showed him at some nightspot in America,
a supermodel beside him. Well, what did she expect?
She looked at the
sheet of writing paper again. What would she say? That she had
written a screenplay for him? He would never read the letter
anyway. Still,
she would never get anywhere if she did not write the
letter. If there was some slight chance of ever meeting him, this
was it.

Filled with determination, she wrote ‘
dear’ and paused,
pondering.
Dear what? Dear Sir? Dear Mark? Dear Mr Lord? Dear
Lord...
She
giggled. How ridiculous. Okay, be formal, after all, it was a
business letter. She would never admit what she felt for him, even
if she ever met him -
that
would be utterly humiliating. A schoolgirl
infatuation, reserved only for the very young, and by the late
twenties, one was supposed to have more sense.

The romantic strains of Depeche Mode’s
In Your Room
wafted around her,
filling her head with impossible dreams. Mark Lord, world-famous
film star, multi-millionaire and recluse. The paparazzi rarely
spotted him, and scandal did not attach itself to his name. What
was he really like? He was not thought to be the handsomest
Hollywood star, but she found him fascinating. His dark blue eyes,
so intense on the screen, glared from beneath fine, crooked brows.
To her, the symmetry of his lean face, the narrow perfection of his
nose and sensual curve of his lips were sheer poetry. The way his
dark hair shone in the light, striking against his smooth golden
skin.

Shaking
herself from her daydream, she read her formal letter, asking if Mr
Lord would be interested in reading a treatment. It would have to
do, or she would rip it into a million pieces and flush it down the
loo, and all of her dreams with it. At worst, she would get a
letter from his press secretary saying thanks, but no thanks.
Picking up her sketchbook, she drew him again; another angle,
another expression, every pencil stroke a caress.

The
plain buff envelope that arrived after two weeks was addressed in a
curving hand. Carrin raced back to her cottage and flung herself
into one of the worn chairs in her lounge. Her heart pounded, her
mouth was dry and her hands clammy. A polite rejection, that was
all it would be, she told herself, steeling herself for the
worst.

Thank you, Miss York, for your strange letter, but Mr Lord
does not involve himself in the child
ish fantasies of failed
writers.

Maybe not. Maybe he was a nice person in real life.
She tore open the
envelope and read the single page written in bold, flowing
handwriting.

'Dear Miss York...'
Carrin's eyes flew to the bottom of the page, and
there it was;
'...Yours sincerely, Mark Lord’.
He had written it himself. That meant
he had read her letter. Her heart tried to crawl, pounding, into
her mouth, and she swallowed hard. Hungrily her eyes scanned the
few lines, and at the end, her breath stopped. He wanted to see her
screenplay, and he was booking her on a flight to California. The
room spun, and she realised that she had forgotten to breathe.
Gasping, she stared at the wall as waves of happiness washed
through her. As the tide of joy ebbed, however, ripples of doubt
nibbled at her. What if he didn't like her, or her screenplay? What
if she didn't like him? He could be an insufferable egotistical
ass, or a charming heartbreaker who used women and then cast them
aside. Weren't most Hollywood stars like that? It seemed strange
that he would send her a ticket just on the strength of her
treatment. That was unexpected. Surely he should have asked to read
the entire script? Then again, did his reasons for wanting to meet
her really matter? The main thing was that he did, unbelievable
though it seemed. Perhaps bored film stars were inclined to indulge
their strange urges just for the hell of it.

Going
into her bedroom, she sat before the mirror. Large, scared
blue eyes gazed back at her from between thick fringes of dark
lashes. After a day working in the hot sun, her tanned skin was a
little grubby and her short blonde hair wilting. Her bone structure
was good; many people had told her that. She had high cheekbones
and a small narrow nose, a firm chin, a mouth that was slightly too
wide, and white, even teeth.

Carrin
sighed, turning away. Even if she was beautiful, how could she
compete with supermodels? Still, all she really wanted was to meet
him; romantic dreams were silly anyway. She would meet him; that
was the main thing. That was why she had written the screenplay in
the first place. Good or bad, she would find out what he was really
like.

The booking
confirmation arrived two days later, and she wondered why he had
sent it separately. The tangible presence of the first-class
booking made up for any doubts, however. It proved that he meant
what he had said. The letter had not been some cruel joke. Armed
with it, Carrin marched into the farmhouse kitchen.

Her mother was
cleaning beans; her brother had just finished the evening milking,
and washed his hands in the sink. Julia slouched at the kitchen
table, idly thumbing through a week-old copy of a woman's magazine.
The oppressive late summer heat filled the kitchen with an
enervating lassitude. Her mother slapped at flies that tried to
land on the food, Julia swatted peevishly at hovering
mosquitoes.

The singing of
crickets and frogs followed her in, filling the kitchen momentarily
with their sweet wild sound, then were cut off as she closed the
door, to be replaced by the mumble of the TV set in the lounge.
Everyone glanced at her, then returned to their occupations. Paul
held his arms under the tap, revelling in the cool water. Carrin's
mother shot him a meaningful glance and he shut the tap with a
sigh. As he dried his hands, Carrin struggled to find the words for
her announcement.

"I'm
going to America," she blurted.

Paul smiled.
"I'm sure you'd like to, one day. Maybe if you got a job, you could
afford it."

"It's
time you gave that up and got a job. We need to renovate the cow
sheds and fix the fences in the top paddock." Paul tucked the
dishtowel back into its holder.

"No, I mean
I'm going to America next week."

Julia
glanced up. "It's just one of her silly daydreams, ignore
her."

"No!"
Carrin glared at her sister-in-law. "I have a first-class booking,
sent to me by a film star. He's interested in one of my
screenplays, and he wants me to go to America." She pulled the out
the booking confirmation and brandished it.

"It looks
real." Paul glanced up at Carrin. "Where did you get this?"

Carrin looked
away, embarrassed to reveal her secret fantasy. Julia's hard eyes
mocked her, and her mother's stolid patience rebuked her.

Paul gave a
snort of laughter, and Julia joined in with hyena-like giggles. Mrs
York smiled and went back to her chore. Carrin snatched the booking
confirmation back.

"Laugh all you
want, it's true. Next week I'll be in California. He's invited me
to stay with him for a week."

Julia slammed
her magazine shut. "You know, your daydreams are really getting the
better of you."

Paul put a
hand on her shoulder. "If it was true, who would look after the
horses?"

Carrin jerked
away. "Julia can do it, instead of sitting around on her backside
all day."

Carrin fled
the kitchen and their mockery. She would show them. Back in her
whitewashed cottage, she placed the booking confirmation beside the
letter on the lounge table. She toyed with the idea of showing them
the letter, but that would probably not convince them either. Her
family believed in hard work and making enough money to live on.
For them, a dream come true would be Paul's favourite cow dropping
a prize-winning calf, or her mother's jam winning a medal at the
local show. Those dreams were within their reach, but meeting a
superstar was too far beyond anything they could imagine.

In her
bedroom, she dragged her battered suitcase out from under the bed.
As she pulled clothes from the cupboard, the inadequacy of her
wardrobe came home to her. Jeans, farm clothes and T-shirts were
all she had. Sighing, she dug amongst her clothes for the few nice
items she possessed. A colourful sarong, a rayon swimming costume
and two summer dresses that she had worn to town many times.
Selecting the best, she folded them into the suitcase, along with a
few jerseys, for it would be colder in Los Angeles. She would not
need them on the farm anyway. Once the suitcase was packed, she lay
on the bed and abandoned herself to her dream once more.

When Carrin
stepped off the plane in LAX, after a twenty-three hour
flight, her anxiety was monumental. Cool balmy air rushed into her
lungs and ruffled her hair; new sights and smells assaulted her
from every direction. Her suitcase made two trips around the
conveyer belt before she could reach the front of the crush to
collect it. Large men pushed and shoved, and heavily scented women
brushed past her. The nasal twang of their speech was alien and
almost incomprehensible. There were no trolleys, but her suitcase
was light, and she carried it through the customs counters and out
into the arrivals' lounge.