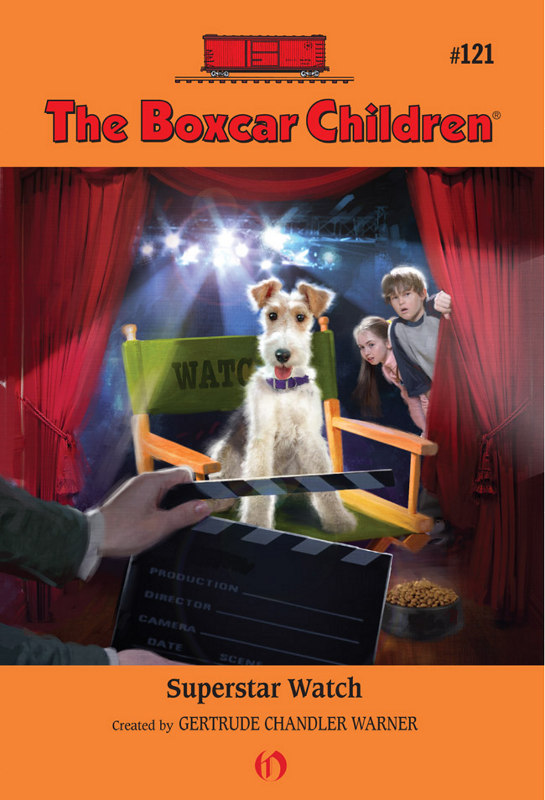 10 The Smell of Success

The Aldens were sitting in front of the Greenfield Ice Cream Café.

“You are the best brother ever. Thank you, Henry,” six-year-old Benny said, rubbing his tummy. Henry had taken Benny and their two sisters, Jessie and Violet, out for a bike ride and a treat. Now the four children sat together quietly enjoying their ice cream cones.

The calm was suddenly broken. “Help me!” a voice called. It was Josh Greene, their neighbor. He went soaring past on his bike.

“I can’t stop!” Josh called. “I think my brakes are out!” His bike was going fast.

The Aldens looked at each other. A split second later they were all running for their bikes.

Henry zoomed down the street on his mountain bike. “Hold on tight!” he shouted to Josh.

“We’re coming!” twelve-year-old Jessie yelled. She and Violet and Benny wanted to help Josh too.

“You can’t slow down at all?” Violet called out. She was ten and she rode her purple beach cruiser as fast as she could.

Brinnnggg
went the bell of Benny’s bike. “I’ll save you!” Benny said. His training wheels scraped against the sidewalk as he tried to catch up.

“You’re going to have to jump, Josh!” Henry yelled. He knew there was a steep slope ahead. If Josh went downhill, it would be even harder to stop.

“Josh, head toward the park,” Jessie called. “If you have to crash, at least it’ll be on grass.”

Josh nodded. Instead of shooting straight towards the hill, he made a left on Main Street. The park was only a block away, near the town square.

Henry, Jessie, Violet, and Benny all stopped at the edge of the park. But Josh’s bike jumped the sidewalk and kept on going.

In a swift, daring move, Josh leapt off his bike and rolled safely onto a grassy patch by the playground. Without a rider, the old bike kept on going until it finally slammed into a tree. Josh’s bike tipped over in the dirt.

The Aldens left their bikes and went running.

“I’m fine,” Josh told them. He got up and wiped loose grass off his jeans. “How’s my bike?”

“Oh dear,” Violet said, as she saw the damage.

The bike’s frame was bent. Both tires had popped.

“What am I going to do?” Josh groaned. “I need my bike to do my paper route.” Josh had a messenger bag on his back. “I was making deliveries when my brakes gave out.” The bag was half full with the afternoon’s newspapers. “If I don’t have my bike, I can’t work.” Josh sighed.

Jessie put an arm around Josh’s shoulders. “Let’s take it to the bike repair shop. I bet they’ll know how to fix it.”

The Aldens gathered their bikes and walked along with Josh. His bike’s flat tires made a
clump, clomp
sound along the sidewalk.

When they got to Jim’s Bike Shop, Josh looked at the shiny new bikes.

“Maybe it won’t cost that much,” Henry said. “Let’s go see what Jim says.” Henry and Josh went to the back of the store.

“I’ll call Grandfather and tell him we’ll be home a little later than we planned,” Jessie said. “I don’t want him to worry.”

Henry, Jessie, Violet, and Benny lived with their grandfather. After their parents died, they ran away and hid in a railroad boxcar. They’d heard that Grandfather was mean and even though they’d never met him, they were afraid. The boxcar became their home. They even found a dog in the woods, took him in, and called him Watch.

When Grandfather located them, it turned out that he wasn’t mean at all. They gladly went to live with him. Watch went, too. Even the boxcar went to Grandfather’s house. Now it was a clubhouse in the backyard.

While they waited for Josh and Henry, Benny and Violet looked at the new bikes. Jessie began reading flyers posted on the wall.

At last Henry and Josh came back. Josh looked crushed.

“It’s going to cost about a hundred dollars to fix my bike,” he said. He put his head in his hands. “I don’t know what to do. I don’t have that much!”

“I wish we could help,” Henry said.

“Maybe we could raise money with a car wash,” Violet suggested.

“A bake sale would be better,” Benny said. He and Violet came over to Jim’s front desk. “I love bake sales!” Benny went on. “So many yummy things to eat.”

“Benny might eat everything at a bake sale before any customers arrived.” Violet laughed, gently teasing her brother.

“Hold on. I have an even better idea!” Jessie announced. She pointed at a bright green flyer on Jim’s bulletin board. “I know how we can help Josh pay for his bike repairs.”

Jessie pointed to some small writing at the bottom of the flyer. It read: PRIZE MONEY WILL BE AWARDED.

“Fame and fortune!” Benny said. “Our dog, Watch, will take the fame,” he told Josh. “And you can have the fortune!”

Henry leaned in to look at the poster. 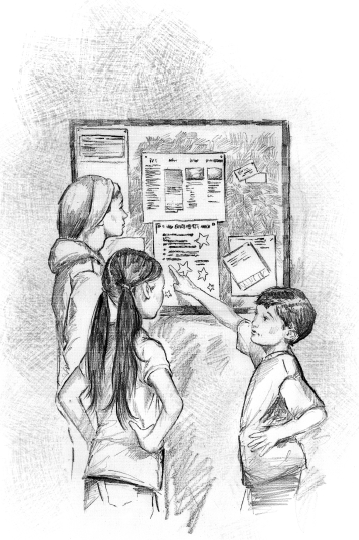 “The auditions are being held today at the Greenfield Mall.” Benny looked confused so Henry explained, “An audition is a try-out. The dogs will do all kinds of tests and the best dog will win.”

“Do you think the Wundermutt company would give you a hundred dollars?” Josh asked.

“We won’t know unless we try,” Henry said. “While Watch auditions, you can borrow my bike for a of couple days to do your paper route.”

“Thank you so much, Henry.” Josh’s eyes were now much brighter and happier. “I sure hope Watch gets the commercial.”

“Cross your fingers,” Henry told Josh. “And keep them crossed.”

“It’ll be hard to deliver papers with my fingers crossed,” Josh said with a laugh. “But I’ll do my best.”

“Watch will do his best, too,” Benny said.

“Grandfather, we’re home!” Jessie announced. Then she said to the others, “Violet, please get Watch’s brush. Benny, you are in charge of his leash.”

Watch came bounding into the room at the sound of Jessie’s voice.

“Where’s the fire?” Grandfather asked, coming out of his study.

“Watch is going to be on TV,” Violet said.

“A big star!” Benny held out his hands to show just how big.

Then, Benny told Grandfather the whole story. He was so excited he said it all without taking a single breath.

“Whoa,” Grandfather said, putting out a hand towards Benny. “Slow down. What’s this about Josh Greene crashing in the park?”

“We’re going to give him the prize money,” Violet added.

“Prize money?” Grandfather asked. “What prize money? I thought this was about Watch.”

Jessie hooked Watch’s leash to his collar. “We can explain on the way to the mall.”

“Can you please take us there?” Henry asked.

“You promise you’ll explain on the way?” Grandfather replied.

“All right then,” Grandfather said, pulling out his car keys.

“Are you ready to be a superstar, Watch?” Benny asked.

“Hold hands, Benny.” Jessie reached out to take his hand in hers. “We have to stick together. This place is really crowded.”

“It looks like every dog owner in town is at the mall today,” Henry said. In the center courtyard of the mall, there was a long and winding line of people and pets that had shown up for the dog audition.

“This is like waiting for a ride at an amusement park in the middle of summer,” Violet said.

They walked to find the end of the line. They were almost there when Benny suddenly shouted, “Ninja!” He yanked his hand out of Jessie’s.

“Ninja, the TV star?” Jessie asked. She saw Benny dashing towards a tall, thin man with a dog. The dog was a black Labrador on a rhinestone-studded leash. Henry, who was leading Watch, and Violet hurried over to see what the fuss was about.

“Why would Ninja be here in Greenfield?” Violet wondered. “I don’t think it could be him, Benny.”

“I am a million percent sure. That is definitely Ninja,” Benny said, “I’d know him anywhere!”

Benny went up to the dog’s owner. “Hi. I’ve seen every episode of ‘Ninja at Night.’ It’s my favorite show. Ninja is my hero,” Benny said. “Can I pet Ninja? Please?”

The black lab looked up at Benny, his tail wagging eagerly.

“No!” the man said sternly. “No one pets Ninja. He is preparing for his audition and must not be disturbed.” The man pulled Ninja away from Benny. “He needs to concentrate.”

Ninja stopped wagging his tail and lowered his head.

“I cannot believe we have to audition like regular folk,” the man muttered loud enough so that everyone around could hear. “This is outrageous. Ninja is a star.” The man stuck his nose in the air, then turned his back on the Aldens.

“Come on, Benny,” Jessie said, taking her brother’s hand back in hers. She gave it a squeeze.

“We’d better get in line anyway,” Henry said. “Even more dogs have arrived since we first got here.”

“I feel bad for Ninja,” Violet said as they led Watch through the crowd. “That dog looked like he wanted to be petted.”

Benny walked along with the others. He dragged his feet sadly.

The children took their place in line. At exactly two o’clock, a woman in a suit stepped up onto a small platform with a microphone in the middle of the mall courtyard. A younger blonde woman followed her carrying a clipboard.

“Testing. One. Two. Three. Attention everyone.” The woman in the suit spoke. A hush fell over the crowd. Benny looked down to make sure Watch was listening. His terrier ears were standing up at attention.

“Good dog,” Benny whispered. He scratched Watch behind the ears.

“Welcome. My name is Margaret Werner. I am the Advertising Manager for the Wundermutt Company. Let me begin by telling you how thrilled we are that so many dogs and their owners came to the mall today.” The woman gave a small smile. “Now, I must let you know that the Wundermutt Company has decided that we are looking for a larger dog.”

Some people in the crowd began to mutter.

“I am so sorry,” Ms. Werner told them. “But if your dog is shorter than this,” she put her hand by her knee, “it will not be allowed to audition today. Maybe another day we will come back looking for a smaller dog. Thank you so much for supporting the Wundermutt Company and our delicious dog food and other products.”

A number of people and their small dogs left the audition. The Alden children and Watch were able to move up in line.

Ms. Werner spoke again. “We are also looking for a dog that is not too skinny. Too fat. Or too old. The dog must be healthy and well trained.”

More people and their dogs left the line. The Alden children could hear some people sigh sadly as they left.

“Whew,” Jessie breathed in relief. “I think he’s got a really good chance! He’s certainly well trained and can do a lot of great tricks.”

Henry took a quick count. “There are now only about fifty people and their dogs left in line.”

Benny reached into his pocket and pulled out a lucky penny. “Here,” he told Henry, “rub it for luck.”