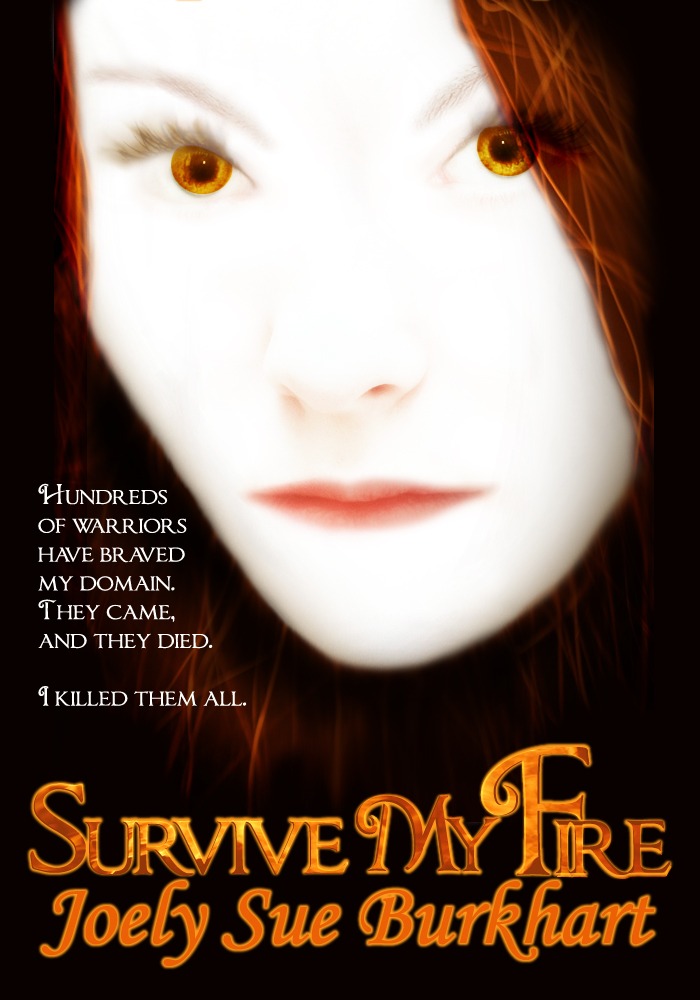 All rights reserved. No part of this book may be reproduced, scanned, or distributed in print or electronic form without the express, written permission of the author.

This is a work of fiction. Names, characters, places and incidents are the product of the author’s imagination and any resemblance to any organization, event, or person, living or dead, is purely coincidental.

Once upon a time…

Visit us on the web at:

A foreign scent intruded while I slept. A warrior. Miles away and on foot, he wouldn’t reach my lair until dusk. Sweat and musk, muscle and pride. Oh, how tasty, how divine a feast.

My dreams became torment in the roasting heat of afternoon. Memories returned from centuries ago, of my life before the curse. Rage crawled in the dark secret fissures of my heart, a fire stoked hour by hour. Trapped in this prison of wing, scale, and claw, I hated the approaching warrior. His phantom blood burned on my tongue.

I would tear him limb from limb. Shred his skin and lick his spicy blood from the unforgiving sands. Crack bone to feast on his marrow. I would dine on his fear, shred his dreams and char his secret hopes.

As soon as the sun touched the horizon and shadows stretched across the red sands, I crept from my lair.

Hundreds of warriors over the years have braved my domain. They came with sword and magic, bows and shields, hearts bursting with courage, hope, rage, envy, even lust.

They came, and they died.

I killed them all.

This one would be no different.

Ah, but he was a cocky son of a bitch. He stood in plain view on the highest point of my barrens. His back to me, he stared out over the empty Well of Tears.

The Well I had not been able to fill despite an eternity of suffering.

The dying sun blazed behind me, outlining his warrior’s body, the proud tilt of his head, and then the chiseled lines of his face as he turned. Dark eyes, shadowed, hollowed with misery. Keldar was a hard land, a hard life, even for a warrior.

A curved scimitar gleamed in the growing shadows, ready in his hand but not offensive. Not threatening, not yet. The black
taamid
flapped about his shoulders like wings, loose and flowing to the ground. Leather knife straps crossed his chest, and a coiled whip hung on his hip. I could smell the sweet herbed oil used to keep the dragon hide supple.

No fear flickered in his steady gaze. No emotion showed on his stone face.

He stared at me, waiting. For what?

Casually, I flicked a wing at him. He ducked, tucked into a smooth roll to the side, and flipped back to his feet. Impressive. Instead of trying to knock him down, I flipped around and grabbed him with my tail as thick as his body.

Squeezing scaled muscle around his chest, I locked him in bands of living iron he couldn’t possibly break.

Crush him. I would crush his bones, blood spray—

The curved blade slid into my flesh, just enough to anger me. I slung him to the ground so hard I heard his ribs creak. But no grunt of pain. Not from him.

The scent of blood—even my own—brought my hunger roaring to life. I breathed deeply and threw my head back. Flames blazed to the heavens. The ground rumbled and cringed beneath my claws. I heard horses miles away scream in terror and I knew people quaked in their flimsy hide tents and whispered prayers to deaf and uncaring Gods.

The warrior before me licked my blood from his blade.

He dared to taste my blood. A shiver crawled down my spine. This was no ordinary warrior. Already, I felt a gnat’s brush against my mind through the fragile blood bond he attempted to weave.

I dared say mine was a bitter and noxious brew compared to the sweet wealth of his blood that would soon roll in my belly. With my hunger fully awakened, I ignored my unease.

Beating my wings, I scrambled at him.

He dodged aside with a roll and then leapt, kicking sand in my eyes. A child’s trick. I didn’t have to see him. I smelled him. Burnt cinnamon, roasted sage, sweat, warrior.

I would eat him alive.

He led me on a merry chase, and I found myself strangely reluctant to end the game. He smelled so good, fought with such tenacity. I felt something other than rage. Or hatred. A strange joy burned in my dragon heart.

Enough. I seized him delicately in my front claws, pinning him flat on his back against the red sands. Panting, he stared up at me. No fear, still, and he even gave me the barest hint of a smile, if the faint wrinkle around his eyes was any indication.

I cocked my head, trying to remember what words meant.
Tal,
chief, of the tribe called Krait.

I blew hard, shaking my head. I had no understanding of the last word.

Warrior class, I guessed. The last? The Kraits were once a mighty clan even in my day, second only to the Mambas. Oh, how the years eroded everything. Even the unshakeable rock crumbled before the winds of time.

Lowering my spined muzzle, I sniffed at his neck. Peeling my lips back, I snagged his clothing in my teeth and tugged it aside to reveal bronze skin and black hair spilling like blood against the rock.

I tasted him, just a lick, a graze of teeth. He shuddered in my grasp. My claws broke his skin despite my care.

Blood. Oh so sweet, so rich. I licked the fine red trails from his skin. The only element missing was fear. A few high-pitched screams to flavor my meat.

So I gripped harder, shaking him. No sound, no cry of pain, no harsh intake of breath. Curious, I raised my head.

He searched the sky behind me, and at last a small smile curved his lips.

Night fell around us while I played with my food. So why was it so bright?

Why did my scales twitch and dance along my back? Why did my wings tremble, white feathers and scales raining about us? Agony wracked me, twisting and crunching my bones, reshaping my body. I roared with fury, but flames died in my mouth. Ash filled my lungs.

Straddling my prey, I jerked around. A full moon hung low in the sky, enormous, gleaming silver. Melting my shining white scales to skin. My wings to limbs. My powerful body to this slim, fragile gossamer of blood and skin.

How had he known?

Jalan tal’Krait stared up at the wonder revealed by the full moon. A woman crouched over him in the place of the fearsome White Dragon. Her skin gleamed as though she’d swallowed the moon itself. Her hair was dark like the multi-shaded camouflage of the coiled Krait, browns and blacks with highlights of red to match her temper. Her Fire.

“What have you done?”

Her voice was raw, ragged, after centuries of disuse, her words harshly accented. How much had Keldar changed in the years of her curse?

Likely much to the worse. “You are Chanda the White?”

She flinched at her true name but refused to answer. Staring down at him, her dark eyes flashing, she fought some inner war. He drew on the fragile bond he’d forged by tasting her blood, using the connection to read her thoughts and heart.

Roiling emotion slammed into him. Rage, hatred, even terror he expected after so many years trapped by such a curse. But need he did not expect.

Need to feel. To breathe, to walk on two legs and feel the night caressing her skin. To speak human words and think human thoughts. To feel alive. To feel her skin warm from another’s touch.

Clenching his jaw, Jalan fought back the rising darkness in him. Fire blazed inside him that would match the White’s flames if he lost control for even a moment. He didn’t expect to feel such a connection with her. To feel such need himself.

Hers? Or his? Did it matter?

He bit back a bitter curse. Of course she would be lovely, proud, fierce, all the things he longed for in a mate. It would make the sacrifice all the more when he paid the final price.

For the few remaining Krait, he would do anything. Even love this woman who could never be his. It would be a fitting sacrifice to save his people.

With a harsh cry, she started to pull away. He seized her thighs, clamping her tighter against him. Growling, she heaved upward, fighting him, but her scent made him hold tighter... Musk, long-forgotten forests that once graced this barren desert, rich and decadent and green. At least, what he dreamed a green land would smell like.

“You need, woman. To satisfy you would be an honor.”

She shook her head, silken strands of her hair trailing over his face and hands.

“You have no idea what I need.”

He slid his palms down her thighs to her knees, using a firm but soothing pressure as he massaged her slender muscles. She flinched in response, but his grip was firm. Drooping, she let her head fall back.

“How long has it been since a warrior touched you?”

“Too long. Years. Hundreds. But I would not—”

He felt her fear through the faint blood bond. Fear that she would abuse him, earn his hatred, debase his honor, and worse, that she would enjoy all the above and more. He allowed the harsh loneliness of his life to twist his face a moment.

“You misunderstand me. I need this as badly as you.”

She stared down at him, her gaze sharp. “I ate the others. Just because you know the secret to my curse doesn’t mean I’m no longer dangerous to you.”

“I like danger.” He didn’t smile, but he didn’t try to keep the glimmer of amusement and attraction from his gaze. Her dark eyes heated, taking note as he expected. “I like you.”

Leaning down, she deliberately dropped her gaze to his neck. “Will you like me once I sink my teeth into your throat?”

He arched beneath her, groaning, fingers tightening on her legs.
“Wells,
yes.

As long as you allow me to bite you, too.”

Trapped as a dragon for centuries, I longed for the return of my claws so I could tear away the cloth concealing his body. His hands interfered with mine, fumbling at the buckles strapping his weapons to his chest, the closure of his trousers.