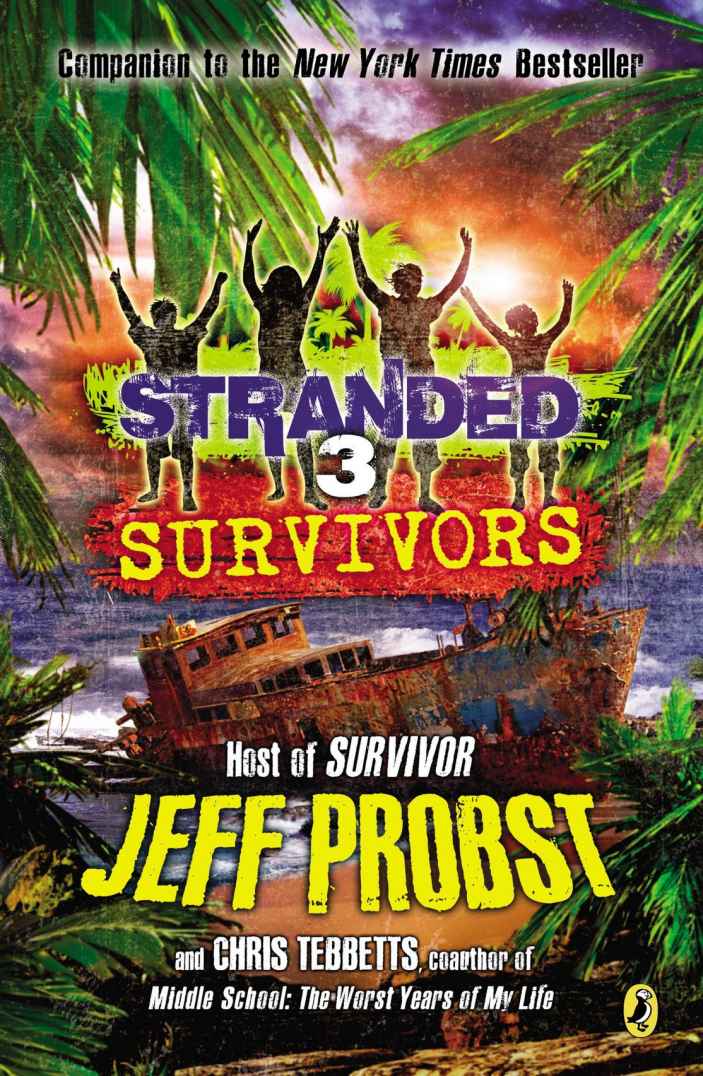 ON THE EDGE OF THE CLIFF

“We’ve got you!” Buzz said. All three of the others gripped the pole around the base, watching as Carter let himself off the tiny shelf where he’d been waiting.

Gripping the ledge with both hands, he lowered himself toward the top of the bamboo. One foot hooked the pole, and then both legs wrapped around it as he came low enough.

The idea was to let go of the ledge, one hand at a time, then press his palms into the cliff wall and use leverage, leg strength, and gravity to lower himself the next few crucial feet.

But the moment Carter let go with his first hand, he could tell it wasn’t going to work. His other hand slipped off too soon, and he slid faster and farther than he’d intended, several feet down the pole. He’d barely taken hold of the bamboo before his own weight forced it to pull away from the wall.

“Wait!” Jane screamed, but there was nothing Carter could do. The pole came unstoppably into a vertical position, and then kept on going. The next thing he knew, it was falling toward the rocks.

First published in the United States of America by Puffin Books,

voices, promotes free speech, and creates a vibrant culture. Thank you for

laws by not reproducing, scanning, or distributing any part of it in any

form without permission. You are supporting writers and allowing

Penguin to continue to publish books for every reader.

After the first
Stranded
was published in February 2013, I began to hear from lots of young readers eager to share their thoughts about
Stranded
and the characters and, most importantly, what they thought should happen next!

Some of you reached out in person and others reached me through @jeffprobst on Twitter. I loved hearing from all of you, and your ideas were very helpful.

I want to personally thank a few of you who read this third book when it was still in the manuscript stage:Sophia, Julia, Keegan, Leo, and Ireland. You are true collaborators on this book. You should take a copy to your teachers and ask for extra credit. (Sophia and Julia, your note about the jellyfish saved the day!)

I hope you all enjoy the next part of the
Stranded
adventure, and remember . . .

“The adventure you’re ready for is the one you get!”

Several people who helped us get our story off the ground for
Stranded Book 1
were kind enough to offer some additional help along the way. Thank you (again!) to our sailing expert Jill Kuramoto; teachers Angela Galyean and Paul Lasher, along with their wonderful students at Hinesburg Community School; the man behind the big bang, Kyle Jablonski; writing and critique partners Jan Donley, Barbara Gregorich, Vicki Hayes, Ruth Horowitz, and Joe Nusbaum; and all-around muse Jonathan Radigan.

A few indispensable newbies deserve our gratitude as well. Many thanks to Dave Bernheisel from the Lightship Overfalls in Lewes, Delaware, for his nautical insights; to Dr. Ramona Salins, who detailed the hazards of wound infection for us; and to Simon Ross and Ian Tucker from the
Survivor
pyro team for a couple of truly bright ideas.

Lastly, one more enormous thank-you to our editor at Puffin, Jen Bonnell, whose voice, insight, and patience were an integral part of this storytelling adventure.

ON THE EDGE OF THE CLIFF

READ HOW THE ADVENTURE BEGAN

B
uzz Diaz looked over the edge. Straight down from where he stood, at the bottom of a hundred-foot cliff, ocean waves lapped at the rocky shoreline of Nowhere Island.

“We’re going to have to climb down,” Carter said.

“Tell me you’re joking!” Buzz shouted. The gusting wind forced them to yell even though they were standing close together.

“But this could kill us.”

“So could staying up here,” Jane chimed in.

Buzz could barely believe they were even having this conversation. The face of the wall they would have to descend was a straight drop. There were only a few places to stand and even fewer to hold on to. One slip and it was over. Nobody could survive that kind of a fall.

Ten minutes ago, they’d been
this close
to getting rescued. He, Carter, and Jane had screamed and waved like crazy as the plane passed over their little island. Buzz’s own screams echoed in his head now—STOP! STOP! HELP! PLEASE!—but none of it had done them any good.

The plane was gone. So was the tree bridge they’d crossed to get up here in the first place. It had fallen straight down into the ravine on the opposite side of Lookout Point, and had nearly taken Buzz with it. He was lucky to be alive.

But Buzz wasn’t feeling so lucky right now. His stomach swooped every time he looked down the cliff face, or out toward the endless Pacific Ocean that stretched away from the island. It was like looking at infinity from here.

“Are we sure this is the
better
way down?” he asked.

It wasn’t a real question. They’d been back and forth across Lookout Point a dozen times. As scary as it would be scaling the ocean-facing cliffs, every other option was even worse. At least on this side, the rock was stepped in a series of plateaus and ledges, as far down as Buzz could see.

“I say we go for it,” Carter announced. He nodded to Jane, the youngest of the group. “You ready?” he asked.

Easy for them to say
, Buzz thought. Carter was a total jock, and Jane had already proven herself to be a natural climber here on the island.

Not Buzz. He was a natural couch potato, as much as anything else. But none of that meant anything for him anymore. The only real question now was whether he’d rather die from falling a hundred feet or from starving to death on this barren tower of rock.

“Yeah, okay,” he said, barely believing the words as they came out of his own mouth. “Let’s get this over with.”

Carter could see how scared Jane and Buzz were. He was scared, too. Out of his mind. But so what? It didn’t change what they had to do.

“I’ll go first,” he said, and sat himself on the edge of the cliff.

He got no argument from the other two. Carter was the strongest. That was just a fact. If a week on Nowhere Island had taught them nothing else, it was how to face up to hard, cold facts.

It seemed like forever ago that their boat had crashed onto the shore, stranding them here. The storm responsible had also separated them from Uncle Dexter and his first mate on the
Lucky Star
, Joe Kahali. Whether those two were still out there in the South Pacific somewhere was impossible to know. Carter had been the last to see them, just before the waves and high winds tore their life raft away from the
Lucky Star
and they’d disappeared into the night.

Ever since that moment, it had been up to the kids to figure everything out for themselves.

How to make fire and shelter.

How to find food and water.

Carter looked down the cliff face. The next nearest ledge was maybe seven feet below him—a few feet more than his own body length. He and Buzz were the same age, eleven, but Carter was taller. For Buzz, and especially Jane, who was tiny for a nine-year-old, the drop would feel even farther.

As he started to inch himself off the edge, Jane stepped forward and grabbed onto the ragged T-shirt Carter had been wearing for the last week.

“I’m always careful,” Carter said, and grinned at his little sister. It was funny, only because they both knew it wasn’t true. Nowhere Island was not a place where you could survive by being careful. You had to take some chances.

Before he could lose his nerve, Carter turned around and eased himself the rest of the way over the lip of the cliff. Pulse racing, and wind whipping in his ears, he lowered his body until he was hanging with arms fully extended. The outcropping he wanted to reach was still a foot or more down. It wasn’t far, but if he missed, it was going to be a long drop to the bottom.

This was the moment of truth. He checked the distance to the ledge under his feet one more time. Took a breath. And let go.

Gravity took care of the rest. His palms scraped over the cliff wall, and the gash on his right hand from the day before lit up with a hot flash of pain. Still, it was nothing compared to the rush of the quick drop. With a jolt, he landed on the narrow piece of rock. His whole body shuddered as he found his balance, and he pressed himself into the wall as close as he could get.

Carter didn’t even try to catch his breath. That would have to come later. A quick glance down past his heels showed him the vertical maze of ledges and handholds that still waited between this spot and the ground.

Seven feet down. Ninety-something to go.

Jane followed Carter’s example. She turned around on the rim of the cliff and lowered herself toward the first ledge.

Hanging with her face toward the rock, it was a blind descent. When she let go, everything blurred, but Carter was right there as she landed. He put a firm hand on her arm and held tight.

Jane only nodded. It was hard to speak with her heart running so fast. It felt as if the wind could scoop in and pull her right off the ledge without warning. Carter was trying to be encouraging, but her brother’s wide eyes said otherwise. This was going to be anything
but
easy.

As Buzz started down, Jane and Carter pushed together to make room for him. Buzz moved more cautiously and not nearly as gracefully, but when his feet finally touched down next to them, he let out a huge sigh of relief.

Level by level, they made their way down the wall, descending like a human inchworm. Carter would advance first, then Jane, then Buzz, before Carter moved on again. Twice, they had to shuffle sideways along a ledge before they could make the next drop. Their progress was slow but steady.

And then it came to a stop. Carter had just reached a shallow ridge below Jane and Buzz when he held up a hand.

They were well past the halfway point. It looked to Jane as if the rocks of the shoreline were no more than thirty feet farther down. But the only thing she could see between where Carter stood and the ground itself was sheer cliff wall. No ledges. No handholds. Nothing.

“Carter? Are we stuck?” Jane asked, trying to stay calm.

“I don’t know,” Carter said. He craned his neck, looking down, left, and right. “We might be.”

“Might be?” Buzz called out, the tension rising in his voice.

Carter didn’t respond, but the answer was obvious to Jane. They’d just reached a dead end—fingers clinging to the cliff wall, feet balanced on narrow pieces of rock, and too high up to even think about jumping.