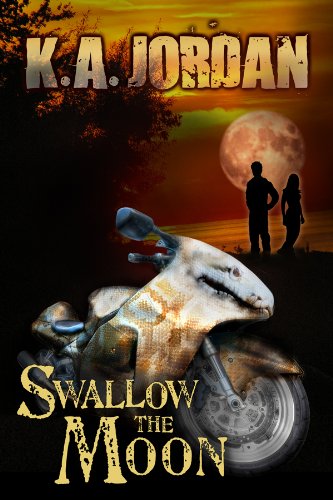 Published by K. A. Jordan at Smashwords

The City of Ashtabula and Ashtabula Harbor and some of the Bridge Street businesses mentioned are real places. However all the characters are products of the author's imagination, any resemblance to actual people is entirely coincidental.

This e-book is licensed for your personal enjoyment only. It may be lent but may not be re-sold or given to other people. If you would like to share this book, please purchase an additional copy for each person. If you’re reading this book and did not purchase it, or it was not purchased for your exclusive use then please return to the e-book store and purchase your own copy. Thank you for respecting the hard work of this author.

To the brave women and men who serve in the Armed Forces.

Athanasios for the fabulous cover!

Bob for his support of my writing projects.

Andre the Irish writer who makes me laugh, and think.

The moon was a glowing opal disk, full and round; the stars were diamonds generously scattered on the black velvet sky. June drank in the sweet autumn air as she stepped out of her house. She glanced around, adjusting her long shawl, checking that the neighbors weren't about as she picked up her basket. The boys next door had a bad habit of roaming the woods at night. June didn't dare go 'skyclad' as her spell book said she should. Instead, she performed her rituals in the hand-crocheted, knee-length wrap dress she wore under the enveloping shawl.

It was her love of the land and the slow turning of the seasons that had drawn her to pagan religion. Wicca never made her feel guilty for wanting normal things like money, sex or a better job. The Earth Goddess understood about urges, the drive to mate, nest and to raise a family. Everything had a season.

June worried that she was missing out.

At twenty-eight years old, June could feel her biological clock ticking; feel herself getting older, lonelier, with each passing year. She knew she was pretty, with long wavy brown hair, blue eyes and a slim figure. She needed to find not just a man, but the right man. June wanted to find her soul mate; he was out there, somewhere. It was time she found him, settled down and started to raise a family.

Tonight she would cast a summoning spell to find the male half of her soul.

I will find him,
she told herself. There was no room for doubt or the spell wouldn't work. Still, her inner critic churned out questions. What if he was on the other side of the world? What if he had been killed, or maimed in the war overseas? What if he had already married someone else? The 'what if' questions became more far-fetched the closer she got to the spring. June did her best to block them out. She didn't need doubts; she needed to concentrate.

The night was cool, the grass prickly under her bare feet. She should call rain but her inner self was drier than the grass.

Her ritual items were tucked in the basket: the glass pitcher, the fine blown brandy snifter, the knife, the shell, her incense, crystals and matches. Young trees whispered in the breeze, sheltering the spring where she performed her rituals. The area had a small stone altar with a white marble slab for the top. The spring itself was round, lined with slate and granite; the water was crystal clear, sweet and cold.

Her inner critic was in full cry, like a hound on the scent as she set up her ritual items. Even though she was alone, her cheeks flamed red with embarrassment. Casting this spell was the act of a desperate woman. She was pathetic, a loser. That voice whispered with considerable malice: 'What if your soul mate is a woman? What'cha gonna do then?'

"Ha! Not likely," June said out loud. He was out there. She was going to find him.

On with the ritual.

She did all the things she'd read in the Wicca books: cast the circle, called the angels to guard the compass points, called and named every one of the elements. She dipped the clear glass pitcher into the water, chanting the spell she'd adapted from a 'Book of Shadows' she'd found online.

June poured the pure spring water into the delicate brandy snifter. She held the glass to the sky, chanting the ritual words, capturing the full moon in the smooth round glass.

She ended the chant, "So mote it be."

She closed her eyes, then swallowed the moon.

The moon was cold, fresh with a tang of magic. June felt the chill brilliance wash through her body.

The light of the moon filled her like a fountain, the light inside her spilled out with every breath. Her arms spread wide, the breeze lifted her hair. She could hear the soft symphony of the wind in the trees as they whispered secrets to each other. June felt suspended on the breeze, summoning the light, summoning him.

There was no flash of light, no open 'world-gate' for her beloved to walk through. Only her heart calling silently for the mate that fate had chosen for her.

Eventually she came back to earth, ending her ritual, banishing her circle, thanking her angels. The ritual left her feeling powerful, buoyed by her contact with the moon, the earth, the elements and the angels.

She re-packed her ritual items in her basket, donned the shawl against the chill. Her step was lighter, her lips curved in a smile as her loose dark hair swung free to her shoulder blades. The bugs and the night birds seemed to sing louder, more joyfully.

Just before she went into the house, she turned to blow a kiss to the moon.

Eric Macmillan folded his lean frame into the chair in front of his computer, then cracked open a beer. His life was in shambles, his sleep tormented by nightmares from his tour of the Middle East. When he returned from Afghanistan his wife presented him with divorce papers. All he had to show for eight years of marriage to his childhood sweetheart was a few grand and a beat-up Explorer.

So much for true love and the American Dream.

Aggravated, he raked his hands through his long dark hair. Petty spite had kept him from cutting his hair or shaving since his return to the States months ago. Why should he bother? He'd kept himself shorn and shaved for the Guard, for his wife and for his job, just as he'd done everything else.

He was done pleasing others; it was his turn.

Growing up he had raced motocross, light little bikes on indoor tracks. Now he wanted a man's bike, sleek and powerful. He wanted to have something between his knees that screamed with speed. He pulled up the search page and typed in two words, "Suzuki Hayabusa."

There were dozens of pages of bikes in all colors: red, black, blue, white, yellow and gray; stock bikes, stretched bikes, custom bikes. He gawked like a schoolboy with his first girlie magazine, polishing off another couple of beers in the process.

His watch chimed midnight when he found the one. She was golden, sleek, powerful; her paint was textured like a snakeskin, the fairing painted with a snake holding the headlight in its mouth. She even had a name: Cora Cobra.

The paint job was copied from an albino Burmese python. There was a woman's leather-clad torso painted on the gas tank. She had a hard Goth look: black hair, white skin, black lipstick and green eyes. This beauty was for sale? He had to see it for himself.

Eric sent an email to the seller, then stared at the pictures until the woman's face blurred. There was nothing else to do but fall into bed. The next morning a reply waited for him, with a phone number. He made an appointment for that afternoon with a woman who gave him the address.

It was a two hour drive to just north of Columbus, Ohio. Eric used his GPS to find the house, a typical suburban house in a bland neighborhood. The garage door was open. Eric parked in the driveway, glimpsing the shrouded form of a motorcycle behind some boxes. Inside, Eric looked at the clutter; guy stuff, thrown haphazardly into boxes. There were framed pictures with the glass broken to shards. Some poor guy got his walking papers.

A plaque caught his eye.

'Jake Patterson – Who died in service to his nation and the Drug Enforcement Agency.'