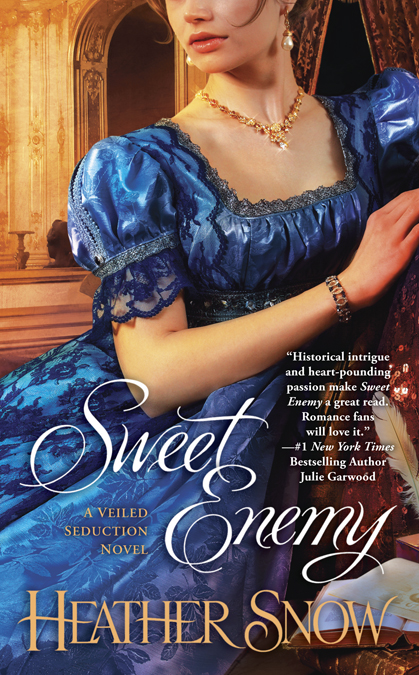 THE START OF A DÉTENTE

Something tilted within him, and Geoffrey gave in to the need that had been building for days.

It was no sweet suitor’s kiss, begun with a slow lean and fraught with anticipation. No, it was a hungry kiss, initiated first by his hands, which cupped Liliana’s face in a firm grip, followed by his mouth, which enveloped hers with ravenous desire.

She moaned low in her throat, a velvety sound that shot fire through him. He half expected her to pull away, but instead, she leaned up on her toes, relaxing into his hold and pressing herself against him. She opened to his exploration, allowing his tongue access to her mouth. Her skin was soft beneath his hands, like satin as his finger brushed the tender underside of her earlobe. She shivered in reaction, sending a tremor through him as well.

This book is dedicated to the loves of my life:

My first love
—my mother, Sarah Fry—who taught me what unconditional love is and who always told me I could do anything I set my heart to…

My lost love
—my grandmother, Gretchen Shepherd—who inadvertently began my love of romance novels when I found hers stashed on the very bottom shelf of her bookcase, hidden behind her recliner. I miss you, Nana, and I hope you would have loved
Sweet Enemy
—even if I would have blushed to know you were reading my love scenes…

My lifetime love
—my husband, Jason—without whom I would be utterly incomplete…

And my special thanks go to:

Mona Snow, Gretchen Jones, Fran Abram and Stacey Long, who waded through so many beginning drafts of this story as I found my way that it bordered on the cruel and unusual…

Katy Madison, Elisabeth Burke and Keri Smith, who helped take my writing to the next level. I couldn’t have done it without you…

ejected.
Again.
Blasted men—they were so shortsighted. Could they just not see what she truly had to offer?

Liliana Claremont entered the cottage through the kitchen, muffling the click of the latch with her wool scarf. She had no wish to wake Carsons, her butler and all-around manservant. She’d given the rest of the staff holiday since she wasn’t expected back for a fortnight yet. But after the Royal Society rejected her paper on the possible isolation of chemicals from plant life, she couldn’t stomach staying in London another moment.

She removed her hooded cloak with a frustrated tug. She would have swallowed her pride and remained in Town if the Fellows would have allowed her to attend their upcoming lecture. But the only woman ever to make it past the hallowed doors of the Royal Society had been the Duchess of Newcastle, and she only once. Liliana huffed. She was no duchess, but one would think that being the daughter of an esteemed chemist, she would at least be able to attend a meeting as a silent guest. Particularly since she had the support of his colleague, who’d taken up her scientific education after
Papa’s death.
Alas, no.
How would she ever become the first woman admitted to their ranks if she couldn’t even get past the threshold?

A loud thump jerked her attention to the hallway.

A frown creased her face. What could Carsons possibly be doing at well past midnight?

A rumbling crash came next, followed by a series of bumps. Almost like books hitting the floor…

Liliana dropped her cloak and dashed down the darkened hall. Light spilled from the library doorway. Foolish man. Carsons was five and sixty if he was a day. He needn’t be moving things, and especially not when there was no one around should he fall.

She flew through the door, scanning the room for the servant. “Are you all ri—” The words died on her lips and shock stilled her feet. She felt her eyes go wide. Books lay everywhere, pulled from their shelves haphazardly like so many feathers plucked from a stew hen. Drawers had been torn from the desk and upended onto the flagged stone floor. The cushions of the settee had been sliced, vases smashed, even plants yanked from their pots, soil scattered around—

A hand clamped over Liliana’s mouth and she was jerked back against a solid chest. A sinewy arm snaked just below her clavicle, pinning her upper arms against her body, and her against the intruder. Her heartbeat spiked with her fear and she drew a sharp breath through her nose.
Who? What?
She struggled, fighting to wrench free.

A calloused thumb moved down to pinch her nose, cutting off her breath. “Be still,” a rough voice growled against her ear. She immediately complied. As a scientist, she knew precisely what would happen to her body if she didn’t start breathing again—and soon. Her lungs screamed and her blood pulsed urgently through her veins in a futile attempt to deliver air to her starving system. Yet he didn’t relent.

Finally, as black spots danced before her eyes, the man
released her nose and Liliana greedily sucked air back into her lungs.

“Where does your mistress hide her valuables?” the voice demanded.

Mistress?
Liliana’s head still spun. Ah, the man must think her a maid. Disheveled and dressed as she was for travel, and given that
she
wasn’t supposed to even be in Chelmsford, it was a logical assumption.

He removed his hand just enough to allow her to croak, “Valuables?”

Liliana scrambled for an answer that might win her freedom. But she had nothing of the sort the thief seemed to be looking for. What would he do to her when he realized? He’d already proven himself a vandal and showed no reluctance to do her harm—and God only knew what he’d done to poor Carsons. Her only hope was escape. “I dunno, sir,” she said, mimicking the lower speech of the villagers. “I only just started here round Christmas.”

The man made a disgusted sound and started to pull her backward, to God knew where. Liliana tried to remain calm, but she couldn’t catch her breath, as the clamoring of her heart seemed to take up all of the space in her chest. Her upper arms were still pinned, but she could move her forearms just a bit. She surreptitiously slipped a hand into the deep pocket of her dress, her fingers curling around the tiny decorative tinderbox she carried with her always, as a means to light candles or lamps or spirit burners in the lab. She flicked the catch with her thumb. Its contents were an experimental mixture of her own creation and weren’t caustic to the touch—but if introduced to the tender tissue of the eyes might do damage enough for him to release her. Though it went against everything in Liliana to harm another person, she would do what she must to escape and run for help.

His grip loosened as he tried to maneuver her through
the doorway. It was now or never. Liliana dug a sharp elbow into her captor’s ribs, taking advantage of his surprise to pull away. She spun, her other arm coming round as she raised the tinderbox to her lips and blew the powder into the man’s face.

“Ah! Christ!” he yelled, his hands immediately flying to his eyes.

Liliana didn’t waste her chance. She ran—down the hall, through the kitchens and into the night, not stopping for more than a quarter mile, until she reached a neighboring estate.

Three days later, the cottage was nearly back to rights. By the time Liliana had returned with help, the intruder had fled. They’d found Carsons trussed up, with a wicked knock to the head but otherwise unharmed. He’d been recovering nicely with the tincture she’d concocted in her father’s old laboratory, which was now hers.

Werewolf in Denver by Vicki Lewis Thompson
Iggie's House by Judy Blume
Blackwater by Kerstin Ekman
Jesses Star by Ellen Schwartz
A Woman's Wisdom: How the Book of Proverbs Speaks to Everything by Lydia Brownback
Invisible Man by Ralph Ellison
Claiming His Wife by Golden Angel
Into the Wilderness: Blood of the Lamb (Book Two) by Mandy Hager
Star Rising: Heartless by Cesar Gonzalez
Fima by Amos Oz
Our partner