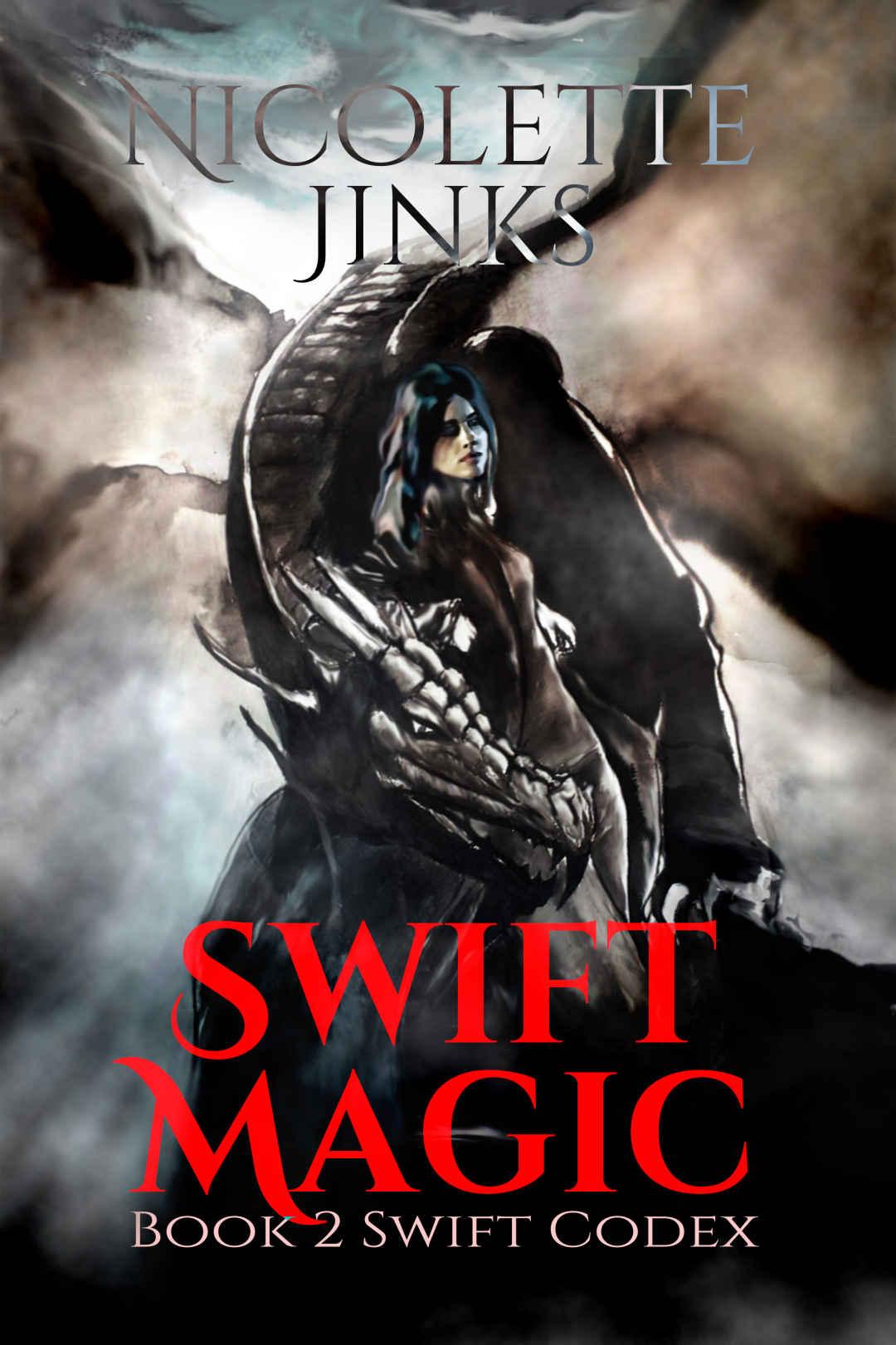 This is a work of fiction. All of the characters, organizations, and events portrayed are either products of the author's imagination or used fictitiously.

NICOLETTE JINKS asserts the moral right to be identified as the author of this work.

Fera killed a man and the fey community has called her to stand before them or lose her family and the magic derived of that heritage. But first, she has to survive the Verdant Wildwoods to reach them. Can she pass the tests of the Wildwoods and face the fey assembly alike? Tricks and illusions abound and nothing will be as it appears, putting her new relationship with Mordon to the test.

The Coles were planning something, and whatever it was, it was going to happen before the verdict was passed tomorrow at 3:15 pm. I should have realized that without Mordon sleeping alongside me, I would be unprotected.

The house creaked, the exact source of the noise impossible to track. Wind howled outside, causing rustling from cracks around the windows. I snuggled a teddy bear up to my chest, its button eyes cold under my fingers. Who was it a gift from? I told myself it was from Mordon, but that might not be right. I heard voices in the hallway. I licked my lips. It must be a random night-check, if they weren't knocking.

“What's on the schedule today?” I tried to ask, but it came out all muffled and slurred together.

“Rrrrrrrrruuuuuuushhhhhh,” sounded the seashell, a constant reminder of why I'd never be able to poke around the wards myself. Perhaps the one advantage of so much sleeping and so little doing was that my house stayed clean.

A light turned on in the hallway. I wondered if it was morning again, or if they'd gotten word and my wrongful death case had been resolved.

The thought made me feel nauseous, and all I wanted to do was hide under the covers and wish that it would all just go away and I would never have to find out if my life was officially over. The chicken and nettle soup I'd requested for dinner now seemed like a poor choice. I should have eaten nothing, just settled for a hot shower with Lilly's assistance.

One of the truth spells,
Veridad
,
gave me cottonmouth. Drinking water only gave me a sore throat. Spell burns healed beneath layers of salve and wrappings which covered more of my skin than my lightweight nightgown. Lilly said they wouldn't scar, even so Mordon still winced in sympathy whenever he saw the bandages or the blistered skin beneath.

A loud scraping of keys in the doorknob roused me. It must not be anyone from my coven. They knew we kept the inner doors unlocked. A wedge of bright white light sliced through the blackness of my room, sweeping across the floor and one wall before finding my bed. Seized in the spotlight's beam, my eyes burned with the intensity. I squeezed them shut and drew the covers up to my nose.

I gathered all of my strength together and rolled onto my other side. I pried my eyes open. Would it be Council members this time, or was Mordon with them? I just wanted an ounce of normalcy again, to sit across from him with a cup of brew and the
Thaumaturgical Tribune
discarded to the side as we talked about nothing.

“Get up.” The woman addressing me sounded accustomed to being obeyed. I squinted at her.

Sleep interruption was forbidden, not on behalf of my well-being, but to prevent me from being able to take action. While I was still thinking this, the woman caught me by the wrist and hauled me to my feet. I stumbled forward, pain blazing through an unprepared ankle. As I took my first trembling steps in her wake, I dragged my blanket with me.

Eyes tearing, I flicked my gaze to the floor as the woman led me down my hall towards the dining room. She tripped over the fold in the runner carpet. I didn't laugh. It was hard enough to stand on my own two feet. The woman snared my elbow, dragging me.

Sluggish as I was, the air was growing thick and oppressively scented with honeysuckle. My magic trying to come to me, an unwieldy jumble of energy waiting to be told to do something, anything. It was as clumsy as when I'd first gotten it back. I doubted I could have shaped it into a spell even if I'd had my wits about me. My feet touched the cool floor of the dining room.

Winded from the effort of essentially half-carrying me, the woman tossed me into the nearest chair. The mismatched shabby-chic décor which Lilly had largely picked out for me was an absurd contrast to what could only be an illegal interrogation or cold-blooded murder. When I had the thought, I didn't panic. The knowledge was oddly disconnected to the experience. Was it the seashell at work, or had all my recent experiences with the court desensitized me?

As I remembered, my house was spotless. Very unusual. Also very pretty. It made me wonder where they'd put all my projects and if I would get all the pieces back in the end if this very pretty-cleanliness didn't end up as a crime scene. Behind me the sun room overflowed with plants which were miraculously thriving despite my care. Piles of books rested on end tables and on the shelves Barnes had secured to the walls while watching the contractors put up wards. Gas sconces hissed on the walls, turned up to what I now knew was mid-level, showing my mint-green fridge and stove.

The woman kept staring at the appliances as if they might spontaneously explode. Which meant she wasn't used to electrical appliances, which meant she came from the upper-end of the sorcering community who believed that unless inventions were made by fellow sorcerers, and that it was not acceptable to own any of those inventions. It was probable that the man sitting across from me came from the same sort of people.

I shivered, causing my chair to rattle against the table. Sleep still clung to me like the aftermath of a disease. I wrapped my legs in the blanket and realized that I clutched the teddy bear.

Who it was in front of me, I couldn't tell. He and the woman both had disguise spells on them, so I couldn't look at their faces without glancing right on by.

What I could gather was that he might have been a bit on the short side. They both wore dark clothes, either black or very dark blue, maybe uniforms. The woman was heavier and stronger than the man. I had the impression she was the brawn behind the operation and he was the brains.

“So, you are the famous Feraline of the Swift Clan,” the man said. Hearing my name only made the hair stand up on my arms and my entire body start trembling. I was conscious of my nightgown. The way it wasn't opaque, so darker skin showed through. I positioned my teddy bear strategically across my chest. Scraggly hair hung in strands down my back. He folded his hands in front of himself and said, “I have been looking forward to meeting you for some time.”

I focused on keeping my teeth pressed together. Being silent would force him to do the talking.

He didn't speak for quite a while, choosing to just look at me instead.

At last he said, “You're not what I expected.”

I raised my eyes to his, but that obscuring spell got in the way, and my gaze came to rest on the table again. The table showed signs of life. It was like a breath of fresh air, a reminder that I wasn't stuck in some dreamworld where I picked up after myself. Used coffee mugs, tea cups, and even a beer bottle riddled its surface. Then there was the conch shell. Stupid thing. The only other item on the table was a small glass vase filled up with irises and sweet peas. Those I knew Mordon had brought me. Red and orange and various hues of blue. They scented the entire room.

“You are to be tried for the wrongful death of Gregor Cole,” the man continued, his finger tapping on the back of his hand. “Do you know why it is that I am here?”

What I'd learned in court could be summed up in two short words: plausible deniability.

“You mean to tell me that you have no idea what has brought me to your home where I have to be subjected to this infernal noisemaker?” His jab at the seashell was the first sign I'd seen of his irritation.

He straightened his back and tapped his finger against the table. “Then make a supposition. Why do you think it is that I have been sent here?”

I tugged my blanket closer to my shoulders, hiding a reach for my necklace with the trinkets I still wore to bed out of habit. “The only reason I can think, after enduring the Merlyn Market Council's wrongful death trial, and being in anticipation of a resolution in my favor which would displease the Coles very much, is that you have been sent under their authority to do what the Council surely will not. By which, I mean you could only have been sent to kill me.”

The man stopped tapping his fingers and the woman sucked in a quick breath. I'd surprised them. I kept from using my trinkets.
“
Then,” he said. “What reason would I have for this interview?”

Tumbuctú by Paul Auster
Hex on the Ex by Rochelle Staab
The Choosing (The Pruxnae Book 1) by Lucy Varna
Waiting for the Sun by Alyx Shaw
The Diary of Lady Murasaki by Murasaki Shikibu
Father’s Day Murder by Leslie Meier
Coming Home for Christmas by Fern Michaels
Guns Of the Timberlands (1955) by L'amour, Louis
Judah the Pious by Francine Prose
Fun Camp by Durham, Gabe
Our partner