Swimming at Night: A Novel 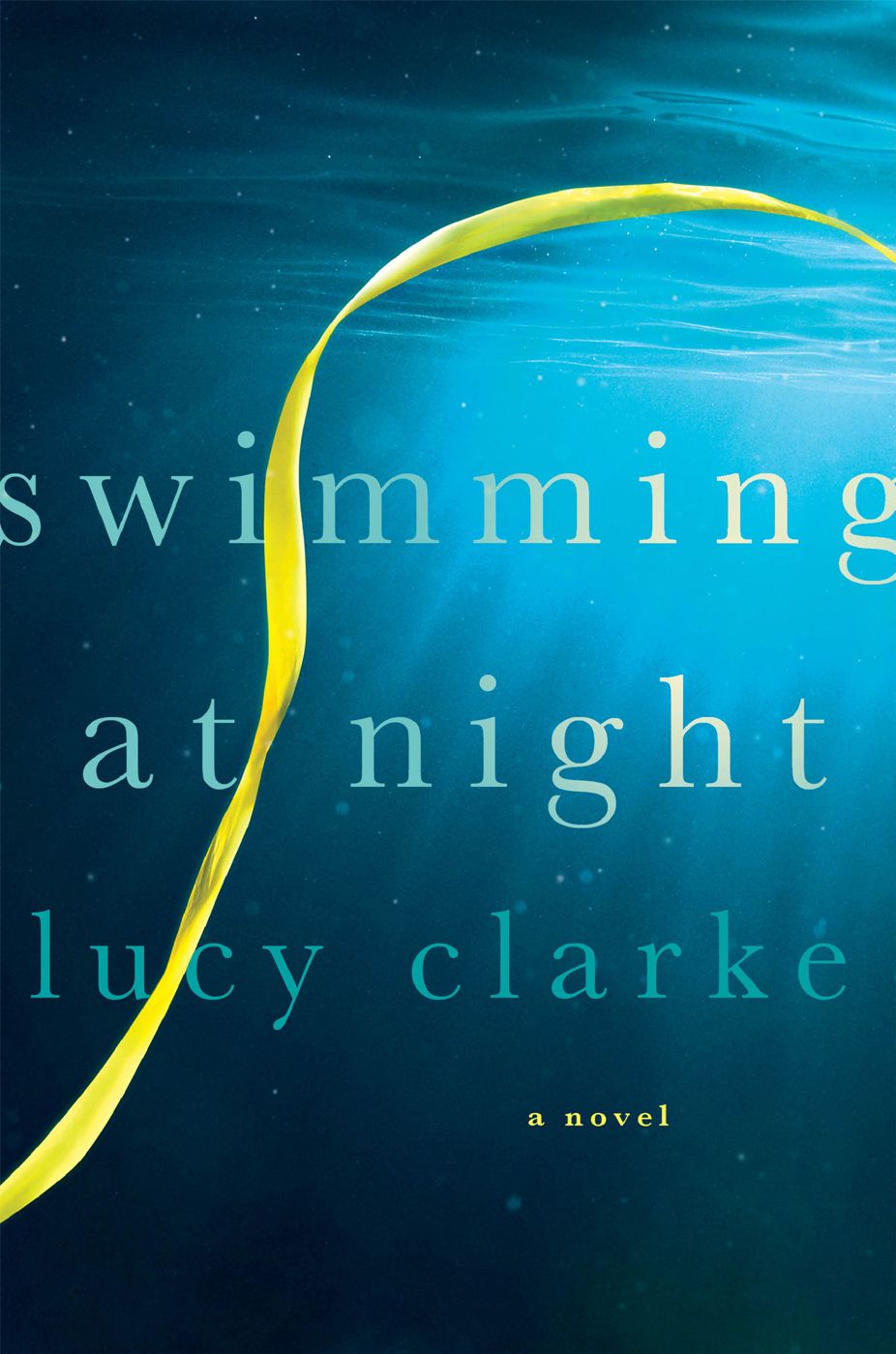 Thank you for purchasing this Touchstone eBook.

K
atie had been dreaming of the sea. Dark, restless water and sinuous currents drained away as she pushed herself upright on the heels of her hands. Somewhere in the apartment her phone was ringing. She blinked, then rubbed her eyes. The bedside clock read 2:14 a.m.

Mia
, she thought immediately, stiffening. Her sister would get the time difference wrong.

She pushed back the covers and slipped out of bed, her nightdress twisted around her waist. The air was frigid and the floorboards were like ice against the soles of her feet. She shivered as she moved through the room, her fingers spread in front of her like sensors. Reaching the door, she groped for the handle. The hinges whined as she pulled it open.

The ringing grew louder as she picked her way along the darkened hall. There was something troubling about the sound in the quiet, sleep-coated hours of the night.
What time would it be in Australia? Midday, perhaps?

Her stomach stirred uneasily remembering yesterday’s terrible fight. Words had been sharpened to injure and their mother’s name had been flung down the phone line like a grenade. Afterwards, Katie was so knotted with guilt that she left work an hour early, unable to concentrate. At least now they’d have a chance to talk again and she could tell Mia how sorry she was.

She was only two steps from the phone when she realized it was no longer ringing. She hovered for a moment, a hand pressed to her forehead. Had Mia hung up? Had she dreamed it?

Then the noise came again. Not the phone after all, but the insistent buzz of the apartment intercom.

She sighed, knowing it would be late-night visitors for the traders who lived upstairs. She leaned towards the intercom, holding a finger to the Talk button. “Hello?”

“This is the police.”

She froze, sleep burning off like sea mist on a sunny day.

Her pulse ticked in her throat. “That’s me.”

She released the front door, thinking,
What? What’s happened?
She switched on the light, blinking as the hall was suddenly illuminated. Looking away from the glare, she saw her bare feet, toenails polished pink, and the creased trim of her silk nightdress against her pale thighs. She wanted to fetch a robe, but already the heavy tread of feet sounded up the stairway.

She opened the door and two uniformed police officers stepped into her hall.

“Miss Katie Greene?” asked a female officer. She had graying blonde hair and high color in her cheeks. She stood beside a male officer young enough to be her son, who kept his gaze on the ground.

“Are you the sister of Mia Greene?”

“—that Mia Greene has been found dead. She was discovered at the bottom of a cliff in Umanuk. The police believe she fell—”

“No! NO!” She spun away from them, bile stinging the back of her throat. This couldn’t be real. It couldn’t be.

She wouldn’t turn. Her gaze found the bulletin board in the hallway where invites, a calendar, and the business card of a caterer were neatly pinned. At the top was a map of the world. The week before Mia left to go traveling, Katie had asked her to plot her route on it. Mia’s mouth had curled into a smile at that, yet she indulged Katie’s need for schedules and itineraries by marking a loose route that began on the west coast of America and took in Australia, New Zealand, Fiji, Samoa, Vietnam, and Cambodia—an endless summer of trailing coastlines. Katie had been tracking the route from Mia’s infrequent bursts of communication, and now the silver drawing pin was stuck in Western Australia.

Staring at the map, she knew something wasn’t right. She turned back to the police. “Where was she found?”

“In Umanuk,” the female officer repeated. “It’s in the southern tip of Bali.”

Bali. Bali wasn’t on Mia’s route. This was a mistake!
She wanted to laugh—let the relief explode from her chest. “Mia isn’t in Bali. She’s in Australia!”

She caught the exchange of glances between the officers. The
woman stepped forward; she had light-blue eyes and wore no makeup. “I’m afraid Mia’s passport was stamped in Bali four weeks ago.” Her voice was gentle, but contained a certainty that chilled Katie. “Miss Greene, would you like to sit down?”

Mia couldn’t be dead. She was twenty-four. Her little sister. It was inconceivable. Her thoughts swam. She could hear the water tank downstairs humming. A television was playing somewhere. Outside, a late-night reveler was singing.
Singing!

“What about Finn?” she asked suddenly.

“Finn Tyler. They were traveling together.”

The female officer opened up her notebook and spent a moment glancing through it. She shook her head. “I’m afraid I don’t have any information about him currently. I’m sure the Balinese police will have been in contact with him, though.”

The police officer described the exact time and location at which Mia had been found. She told her that medical assistance had arrived swiftly on the scene, but that Mia was pronounced dead on their arrival. She explained that her body was being held at the Sanglah morgue in Bali. She confirmed that there would be further investigations, but that so far the Balinese police believed it was a tragic accident.

All the while Katie stood completely still.

She thought instantly of their mother. She allowed herself a moment to imagine the comfort of being held in her arms, the soft cashmere of her mother’s sweater against her cheek. “No,” she told the officer eventually. “I’d like you to leave now. Please.”

“Of course. Someone from the Foreign Office will be in touch tomorrow with an update from the Balinese police. I’d also like to visit you again. I’ve been assigned as your Family Liaison Officer and will be here to answer any questions you have.” The woman took a card from her pocket and placed it beside the phone.

Both officers told Katie how sorry they were, and then left.

As the door clicked shut, the strength in Katie’s legs dissipated and she sank onto the cold wooden floor. She didn’t cry. She hugged her knees to her chest to contain the trembling that had seized her. Why had Mia been in Bali? Katie didn’t know anything about the place. There was a bombing outside a nightclub some years ago, but what else? Clearly there were cliffs, but the only ones she could picture were the grass-covered cliffs of Cornwall that Mia had bounded along as a child, dark hair flying behind her.

She tried to imagine how Mia could have fallen. Was she standing on an overhang and the earth crumbled? Did a sudden gust of wind unbalance her? Was she sitting on the edge and became distracted? It seemed absurdly careless to fall from a cliff. The facts Katie had been given were so few that she couldn’t arrange them into any sort of sense. She knew she should call someone. Ed. She would speak to Ed.

It was her third attempt before she managed to dial correctly. She heard the rustle of a duvet, a mumbled, “Hello?” and then silence as he listened. When he spoke again, his voice was level, telling her only, “I’m on my way.”

It must have taken no less than ten minutes for him to drive from his apartment in Fulham to hers in Putney, but looking back she wouldn’t remember any of that time. She was still sitting on the hallway floor, her skin like gooseflesh, when the intercom buzzed. She stood groggily. The floorboards had marked the backs
of her thighs with red slash-like indentations. She pressed the button to let him in.

Katie heard the thundering of his feet as he took the steps two at a time, and then Ed was at her door. She opened it and he stepped forwards, folding her into his arms. “My darling!” he said. “My poor darling!”

She pressed her face into the stiff wool of his jacket, which scratched against her cold cheek. She smelled deodorant. Had he sprayed himself with deodorant before coming over?

“You’re freezing. We can’t stand here.” He led her into the living room and she perched on the edge of the cream leather sofa.
It’s like sitting on vanilla ice cream,
Mia had said the morning it was delivered.

Ed removed his jacket and draped it over her shoulders, rubbing her back with smooth circular strokes. Then he went into the kitchen and she heard him open the boiler cupboard and flick on the central heating, which rumbled and strained into life. There was the gush of a tap as he filled the kettle, followed by the opening and closing of drawers, cupboards, and the fridge.

He returned with a cup of tea, but her hands didn’t move to take it. “Katie,” he said, crouching down so they were eye level. “You are in shock. Try and drink a little. It will help.”

He lifted the tea to her lips and she sipped it obediently. She could taste the sweet milky flavor on her tongue and the urge to retch was immediate. She lurched past him to the bathroom with a hand clamped to her mouth. The jacket slipped from her shoulders and fell to the floor with a soft thump.

Bending over the sink, she gagged. Saliva hit the white ceramic basin.

The Red Door by Charles Todd
Never say forever (Never series Book 1) by Taylor, Courtney A.
Nimisha's Ship by Anne McCaffrey
The Presence by John Saul
Speaking in Bones by Kathy Reichs
Kat, Incorrigible by Stephanie Burgis
Dustbin Baby by Wilson, Jacqueline
Girl on the Best Seller List by Packer, Vin
Anyone You Want Me to Be by John Douglas
Evanesce (The Darkness #2) by Cassia Brightmore
Our partner